Samsung: Our 2006 phone concepts prove Apple is a hypocrite

Samsung has struck back at Apple’s $2.5bn patent demands, arguing that its Cupertino rival “could not have sold a single iPhone without the benefit of Samsung‘s patented technology.” In a brief filed to the Californian courts this week, Samsung points to its more than two decades of cellphone research, the WSJ reports, and accuses Apple of hypocrisy, copying design concepts from Sony. Samsung also wheels out some new evidence from 2006, countering Apple’s suggestions that the original iPhone marked a huge change in the Korean firm’s design approach.

“Apple seeks to exclude Samsung from the market, based on its complaints that Samsung has used the very same public domain design concepts that Apple borrowed from other competitors, including Sony, to develop the iPhone” Samsung’s filing argues. In fact, the company insists, Apple itself originally made clear that it had taken its iPhone inspiration – in part at least – from ideas out of Sony’s labs:

“Apple‘s own internal documents show this. In February 2006, before the claimed iPhone design was conceived of, Apple executive Tony Fadell circulated a news article that contained an interview of a Sony designer to Steve Jobs, Jonathan Ive and others. In the article, the Sony designer discussed Sony portable electronic device designs that lacked “excessive ornamentation” such as buttons, fit in the hand, were “square with a screen” and had “corners [which] have been rounded out.”” Samsung filing

As for Apple’s much-circulated evidence suggesting Samsung made a complete design switch when the iPhone was launched (as in the image, shared by AllThingsD, below), Samsung is having none of it. “Prior to the iPhone’s announcement  in January 2007, Samsung was already developing numerous products and models with the same design features that Apple now claims were copied from the iPhone” it insists. 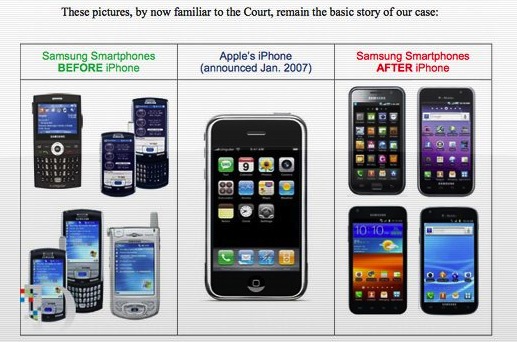 “In the summer of 2006, Samsung began designing its next generation of mobile phones, based on the market trend of ever-increasing screen size” Samsung continues. “At that time, Samsung‘s designers envisioned a basic design: a simple, rounded rectangular body dominated by a display screen with a single physical button on the face … [as] documents confirm, Samsung independently developed the allegedly copied  design features months before Apple had even announced the iPhone. It did not switch its design direction because of the iPhone.”

Samsung shares an image showing multiple 2006 concept designs it was considering, one of which went on to be the Samsung F700 and the subject of a Korean design registration application in December 2006: 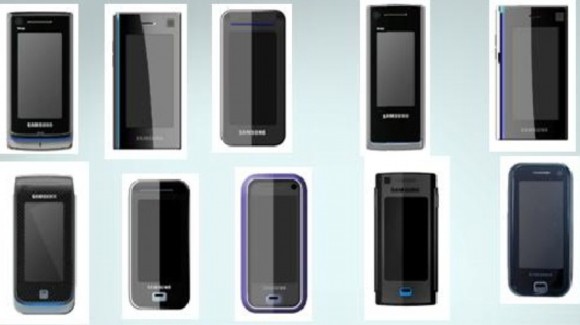 Even more interesting, Samsung says it was working on a grid-icon GUI back in the summer and fall of 2006 as well, sharing the following graphic of a concept from that era. “Contrary to Apple‘s cherry-picked “pre” and “post” iPhone choices of Samsung‘s phones, Samsung designed and developed large screen smartphones before the iPhone as well as bar type phones, sliders, and folder phones” it concludes. 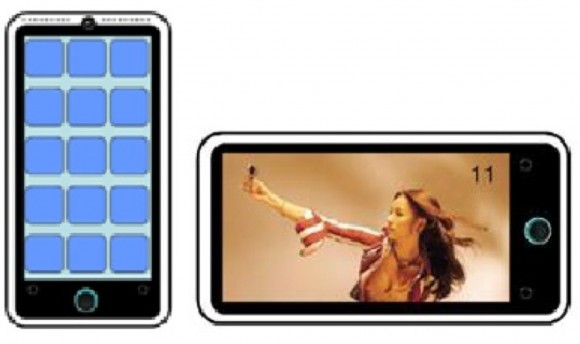 Unusually, Samsung also makes reference to the tricky balance between being a key Apple component supplier and being a rival in the smartphone marketplace. “Apple relied heavily on Samsung’s technology to enter the telecommunications space” it points out. “Samsung supplies the flash memory, main memory, and application processor for the iPhone.” However, it also reiterates earlier complaints that Apple infringes on Samsung patented technology:

“Apple also uses patented Samsung technology that it has not paid for. This includes standards-essential technology required for Apple‘s products to interact with products from other manufacturers, and several device features that Samsung developed for use in its products” Samsung

Samsung isn’t impressed either by Apple’s suggestions that it tried to engage in patent licensing – “despite the fact that virtually every other major industry participant was willing to take a license from Samsung for use of the standards-essential patents in this suit, Apple claimed that Samsung‘s patents are unenforceable” – or the patents the Cupertino company holds and is alleging that Samsung infringes. Far from being the innovative and distinctive interface technology that makes the iPhone and iPad so appealing, Samsung argues that Apple merely snatched up existing systems and then hurriedly patented them:

“Apple‘s utility patents relate to ancillary features that allow users to perform trivial touch screen functions, even though these technologies were developed and in widespread use well before Apple entered the mobile device market in 2007. Samsung does not infringe any of Apple‘s patents and has located dead-on prior art that invalidates them” Samsung

“Samsung does not need or want to copy” the company says indignantly. The full court filing is below.