Samsung may have been one of the display notch hold-outs so far, but that won’t last, with new Infinity Display panels promising to further annoy those who can’t stand screen cut-outs. The fresh additions to the company’s AMOLED line-up were previewed at SDC 2018, Samsung’s annual developer event, today, expanding the existing Infinity Display brand with several new options.

Samsung launched the Infinity Display back on the Galaxy S8 and Galaxy S8+, its move to cover more of the front of each smartphone with screen. Then, it distinguished itself with two curved edges that wrapped around the left and right sides of each phone, in addition to very small bezels top and bottom.

At the time, it offered consumers one of the most impressive screen-to-phone ratios on the market. Even as Samsung has further shrunk the upper and lower sections in subsequent devices, however, rival approaches have proved more dramatic. By embracing notches, or cut-outs, typically in the upper middle of the smartphone’s screen, rival manufacturers have been able to fit even more expansive displays.

Now, alongside the Infinity Flex Display folding panel for an upcoming smartphone in early 2019, Samsung is also readying some notches of its own. In fact, there’ll be four new screens, taking the Infinity Display range in four different directions.

The so-called New Infinity will continue where the current Infinity panel leaves off. No notch, just a Super AMOLED screen that pushes as close to the upper and lower edges of the device as possible. It’ll leave a smartphone that lacks any sort of cut-out.

Then there’s Infinity-U and Infinity-V. These will have a central notch, the former in the shape of a “U” – much akin to what we saw on the Essential Phone – while the latter looks more like a “V” or an arrow. That will allow the display to push further to the top of the device, while still accommodating a front-facing camera and potentially other sensors.

Finally, there’s Infinity-O. That will have a circular cut-out, not in the upper-center of the display but offset to one side, and in fact fully surrounded by AMOLED. It’ll take advantage of the screen technology’s support for cut-out shapes, and presumably Samsung will be able to change the location of that cut-out depending on the requirements of the device. 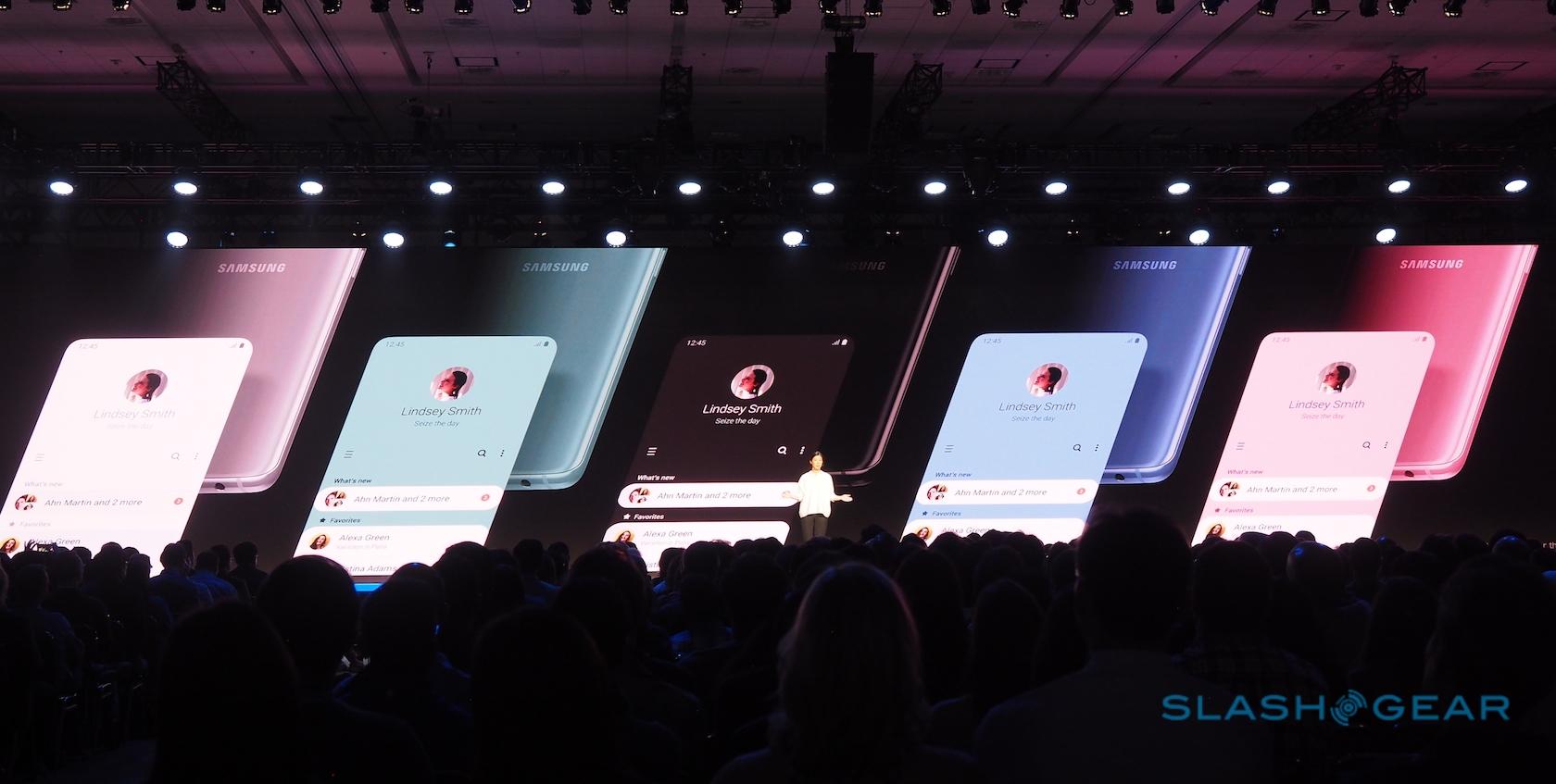 Indeed it’s possible that Samsung’s own flagship Galaxy phones could continue to use the New Infinity panels and avoid the cut-out altogether, while Samsung Display supplies the notched screens that other manufacturers demand. Right now, nobody at Samsung is willing to talk about unannounced products.

What we’re most curious about, of course, is the upcoming Samsung Galaxy S10. The new flagship Android phone is expected to arrive in three variations – two with a curved display and one with a flat screen – across different price points. However, it’s unclear whether any of the three, or indeed all of them, will use one of these new Infinity AMOLED panels. For that, we’ll have to wait until early in the new year. 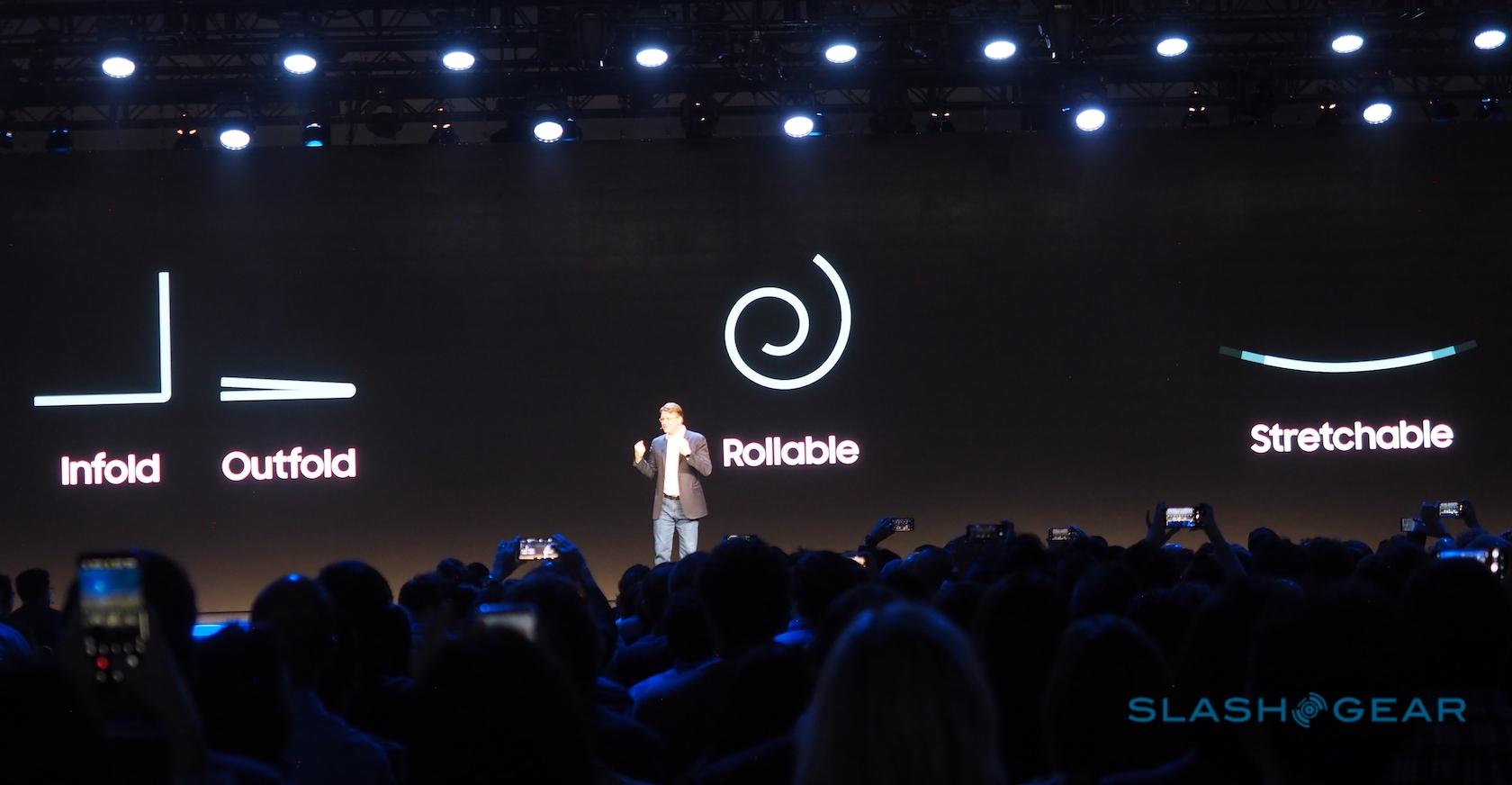 Meanwhile Samsung isn’t leaving it at that. In addition to the clamshell folding Infinity Flex panel it previewed today, the company confirmed some other designs it’s working on. The design that got stage-time was a so-called “infold” panel: the device folds in with the screen on the inside. Samsung is also working on an “outfold” version, it confirmed, which would wrap around the outside of a folding device.

There’s a rollable screen in development, too. That could potentially allow for a device which unfurls from a far smaller form-factor, similar to the prototype that Samsung Display demonstrated back in 2016.

Finally, there’s possibly the oddest display of them all. Samsung is working on a stretchable display, the details of which are in short supply for the moment. It’s unclear to what degree, exactly, the panel would be able to expand, and how that might impact the interface.