Samsung has revealed its CES 2021 TV range, including extra sizes of MicroLED TV, fresh QLED options, and support for services like Google Duo. Having debuted MicroLED with its eye-catching – and wallet-draining – The Wall modular TV back in 2018, Samsung is now expanding its options for those who want the screen technology but in a simple, one-box form.

Back in December, we saw the first of those sets, with a 110-inch MicroLED screen. Today, Samsung is announcing 88-inch and 99-inch versions, for those who still want the tech but maybe have a little less space or budget. 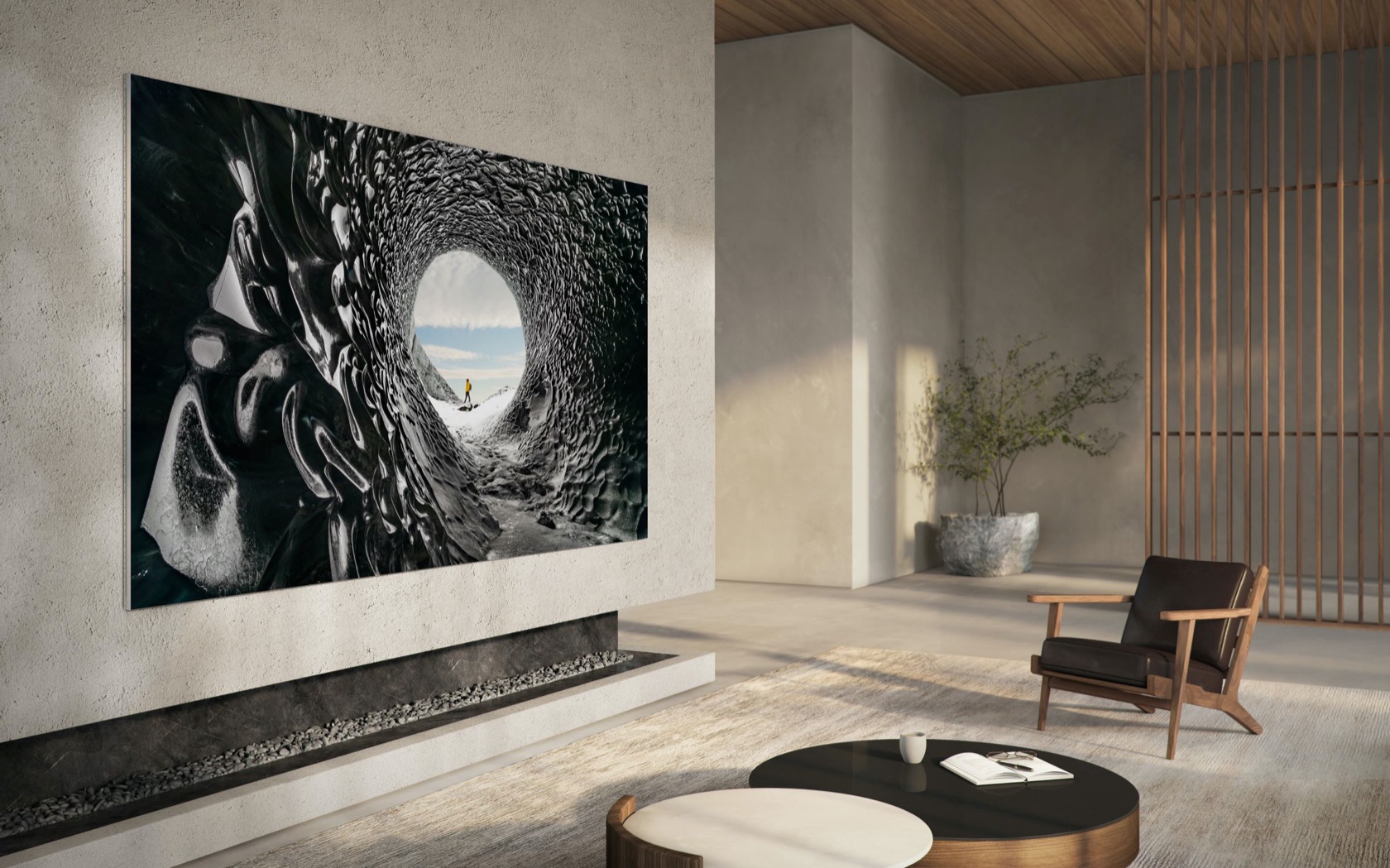 You still get individually controlled pixels and the dedicated MicroLED processor, along with a 99.99-percent screen to body ratio. Each pixel supports infinite contrast, Samsung promises, along with extreme HDR with up to 2,000 nits of brightness. There’s also Multi View, which allows up to four sources to be shown on one screen simultaneously: that, if you have the 110-inch MicroLED, means effectively four 55-inch TVs in one. 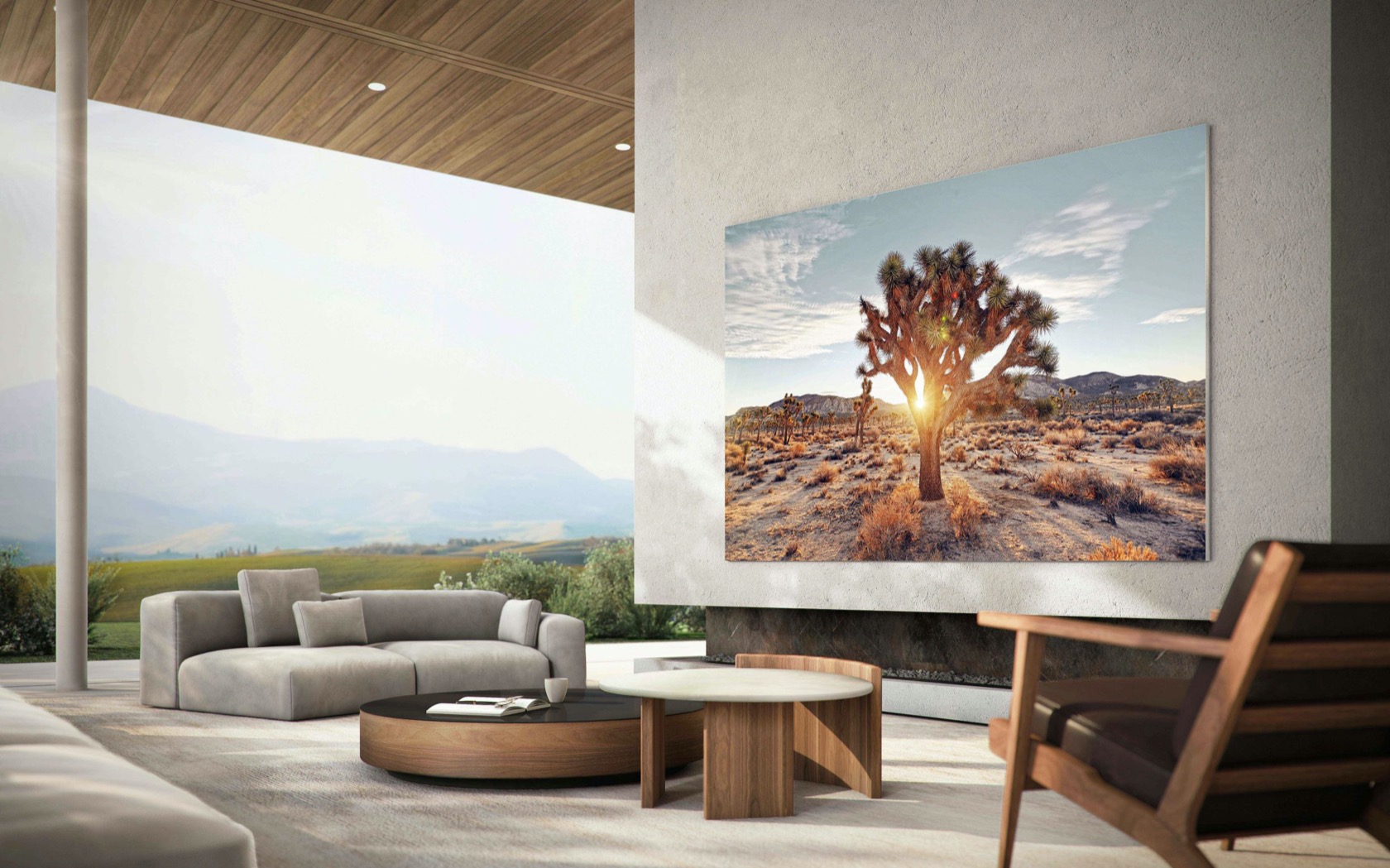 The hardware itself has an Infinity Screen bezel-free design, which basically means that though there’s a “Pure Metal Plate” surround you’re probably not going to notice it from the typical viewing distance. Ambient Mode allows it to blend into the wall by matching the paint color. OTS Pro (Object Tracking Sound) pairs surround sound aligned with what’s happening on-screen for more directionality, with two extra tweeters to power it. 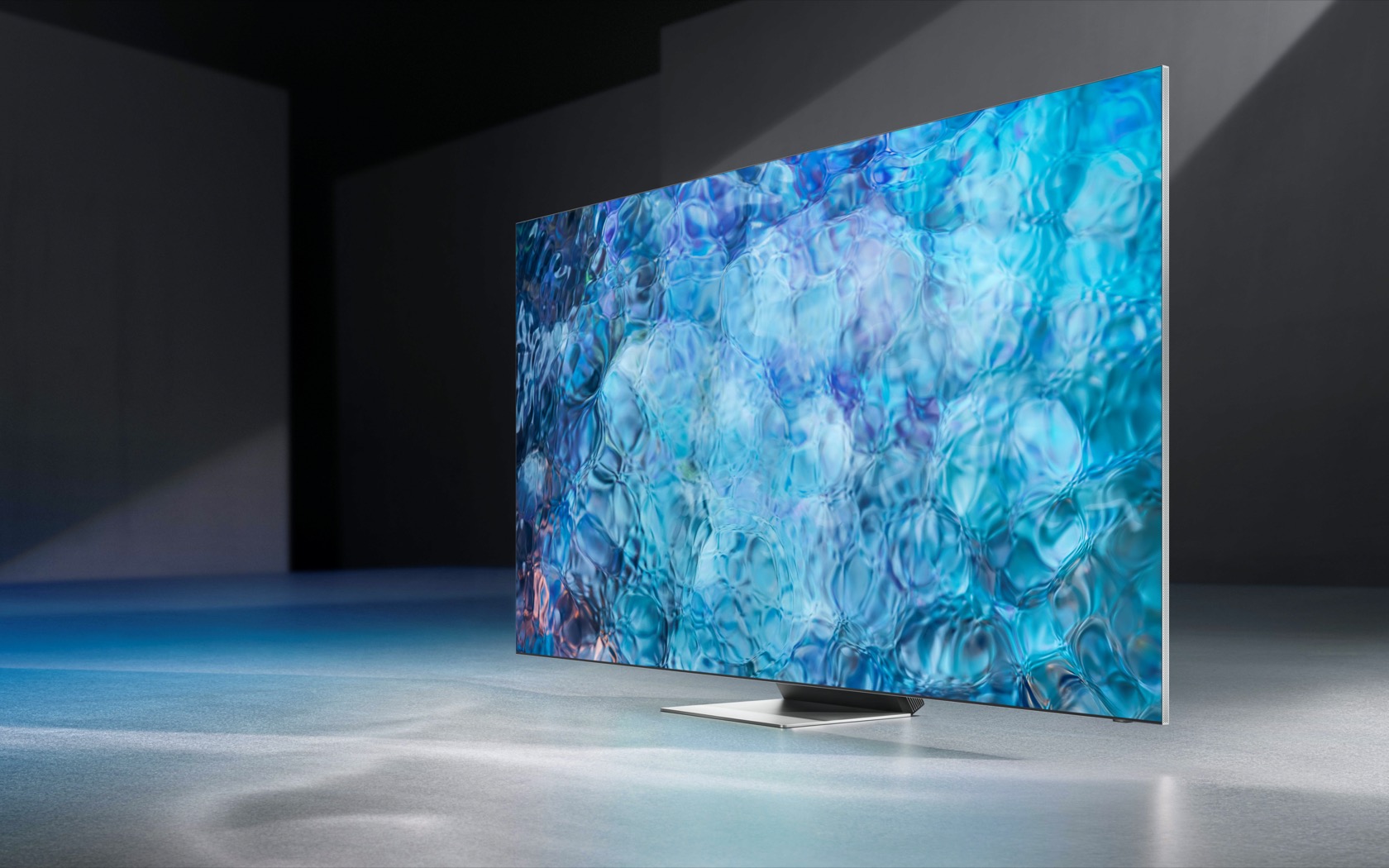 Gone are the lenses, with each LED chip doing away with packaging too. The result, Samsung says, is less blooming and more precise control, all handled by a new Quantum Processor. That can upscale to 8K, in addition to using an a light sensor hidden under the Samsung logo to automatically adjust for bright and dark content according to the ambient lighting conditions in the room. 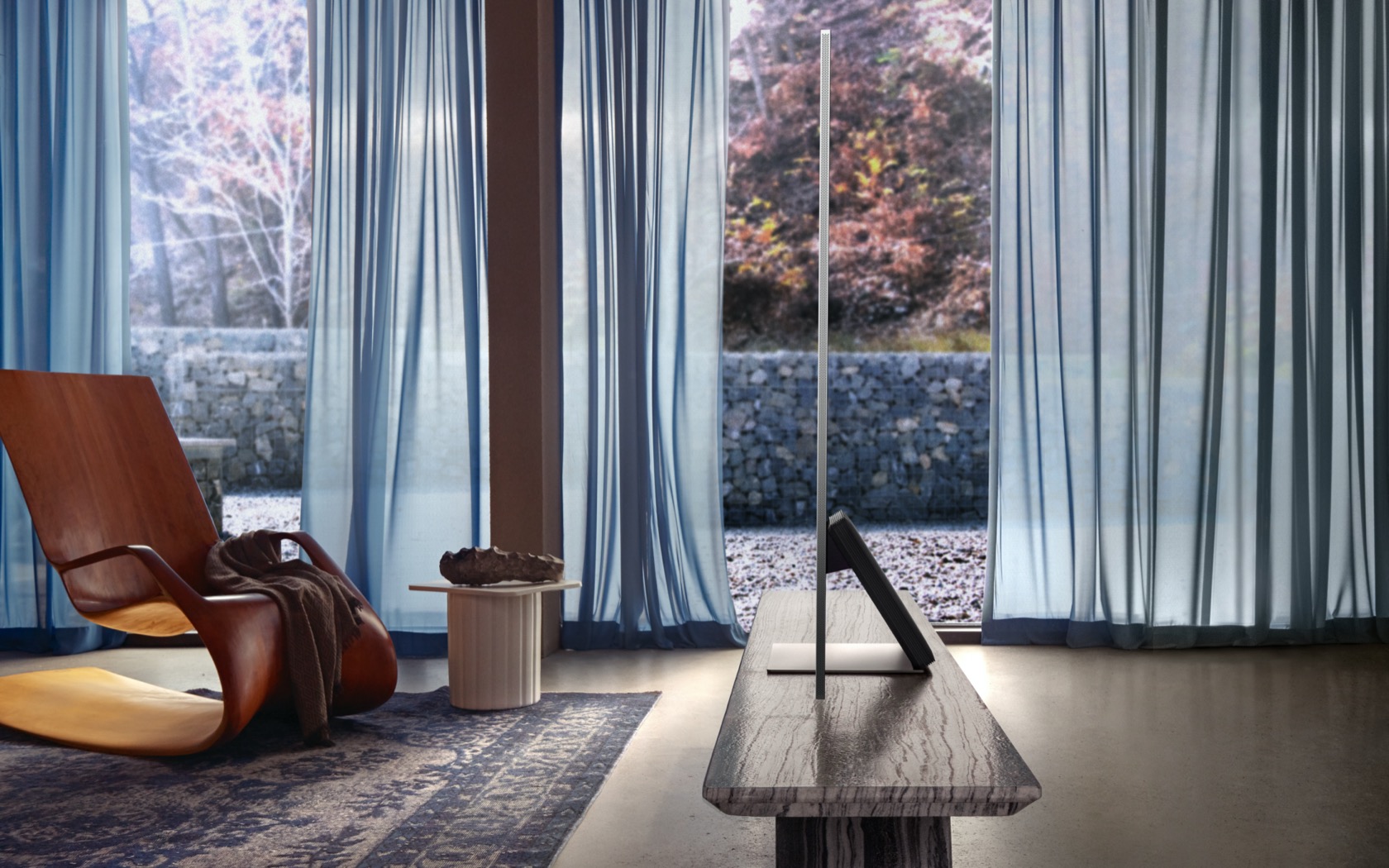 0.9 mm bezels help keep the hardware subtle, and there’s also OTS Pro support and Virtual Object Tracking Sound. With the right speakers, the QLED TVs can also use Samsung’s SpaceFit Sound system, measuring the distance to the walls of the room and adjusting to suit the reflections and such.

For 2021, new services and features

It’s not just new hardware that Samsung has for CES 2021. There’s also now services like Google Duo being supported on its TVs. You’ll be able to start a Duo call on your phone, and then use screen mirroring to project up to twelve callers’ video onto the TV. 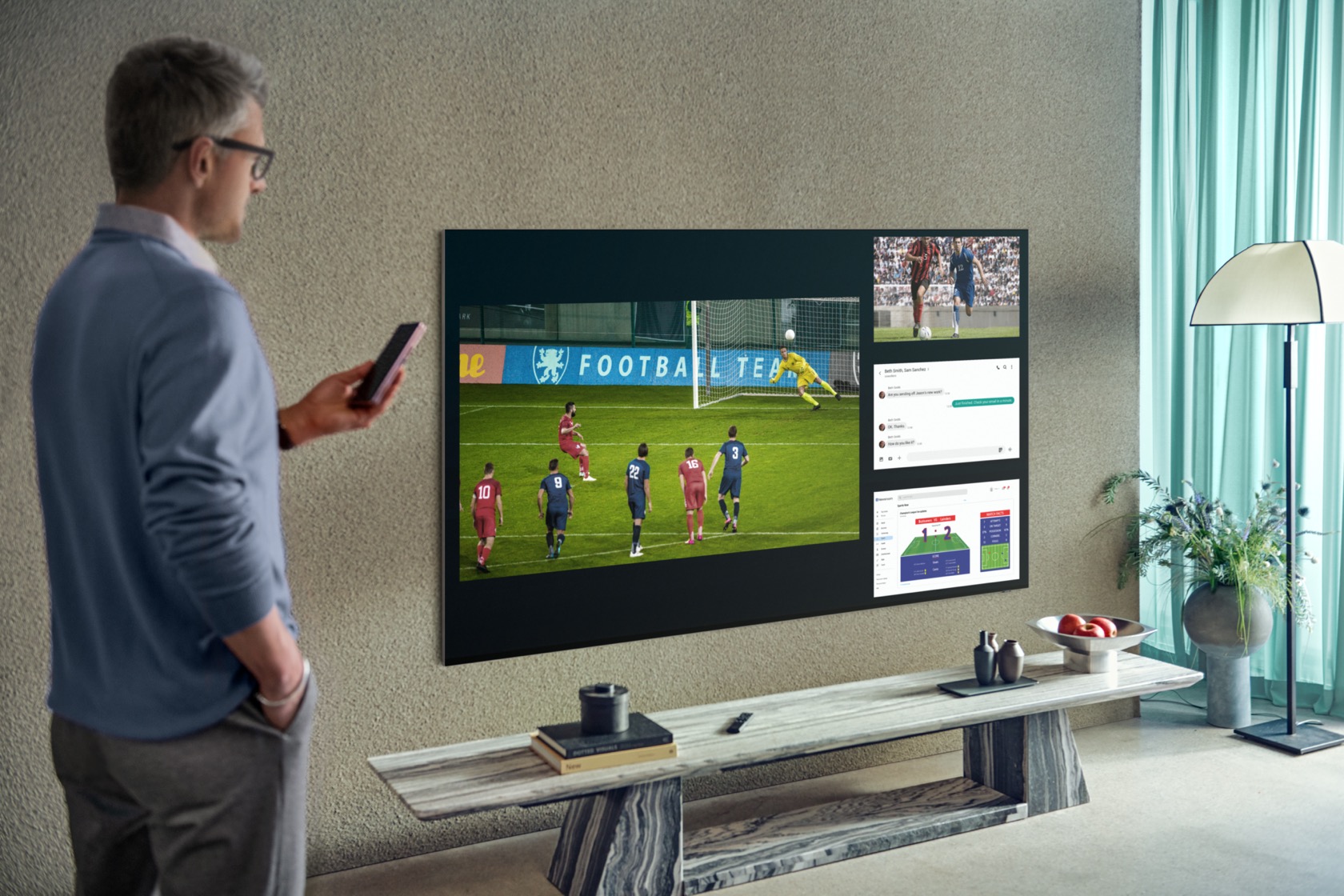 Remote Access Plus, meanwhile, takes the TVs and makes them a little more functional. With a keyboard and mouse connected, for example, there’s access to Microsoft Office 365. You can access your PC remotely, as long as both it and the TV are logged into the same Samsung account.

Pricing for the new TV line-up will be confirmed later in the year, closer to launch.