Samsung has played coy with battery life predictions for the Galaxy S III, but even with a quadcore processor onboard, pre-launch feedback suggests the Korean company could have achieved the impossible. Going by some early figures from notorious insider Eldar Murtazin, the Galaxy S III’s 2,100 mAh power pack is good for over 20hrs of runtime with 42-percent of juice still to go.

Impressive numbers, certainly, with Murtazin claiming that his usage includes around five hours of audio playback, a dozen photos and a single video (no word on how long that was). However, it’s also worth noting that cellular radio use was minimal – only an hour out of the total time active, apparently – with the rest presumably being a combination of WiFi and Airplane Mode. 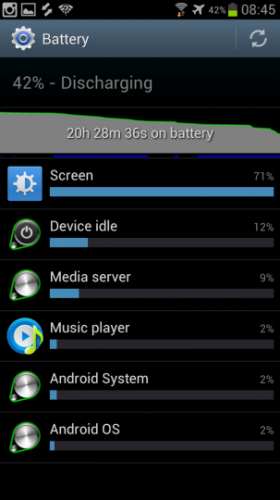 That’s going to have a significant impact on runtime, certainly, and so we’re expecting more regular daily use to see the Galaxy S III take more of a hit than in Murtazin’s testing. Still, with his device cruising for in excess of a full day’s use, that still implies that a normal day of functionality should be possible, on a par with other flagship Android phones of the moment.

Unsurprisingly, the Samsung’s display – a whopping 4.8-inch HD Super AMOLED running at 720p resolution – is the major culprit for battery draw, comprising 71-percent of the total power consumption. That majority status is unlikely to change even when the radios are turned on.

Samsung expects to launch the Galaxy S III in Europe from May 29, with North American variants toting LTE planning for the Summer. More details in our full hands-on.