It appears that our good friends in outer space have granted the USA a favor and are bringing the Samsung Galaxy Note to the states after all. Today the FCC is showing an AT&T-bands-toting Samsung Galaxy Note, HSPA+ that is, this allowing us to dream that the Galaxy Note will indeed be reaching the states in a lovely blue fashion – at least at first. The Galaxy Note is what Samsung is calling their new in-between product, bridging another gap between products, that being between smartphones and tablets, in this case. Will this be your ideal situation for carrier and device?

You can see the FCC listing right now as it is a public document and should be shared for those interested – that said, there’s not just one whole heck of a lot of information in there for the layman. For those of you not just jumping for joy over radio specs, here’s our hands-on video with the first version of the Galaxy Note as we saw just weeks ago at IFA 2011 in Berlin, thanks to Samsung and their Unpacked series of keynotes:

Check out the rest of the hands-on post from that faithful day back on September 1st for the full story. Meanwhile we’ve got one giant Samsung Galaxy Note portal for you to be exploring as well. Also what’s that I hear? You want more? How about a benchmarks, inking, editing, and more post? Get into it! 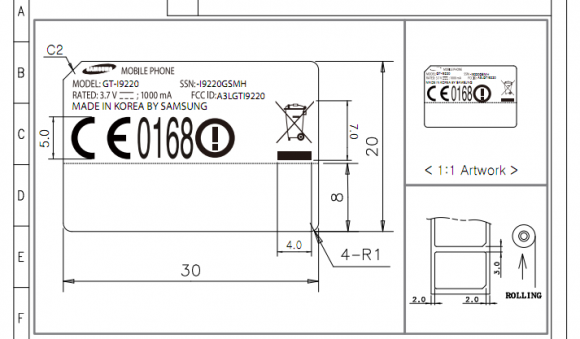 Also note that this may point toward a possible announcement at Samsung Mobile Unpacked 2011 Google Episode, an event we’ll surely be attending.