Samsung’s Windows 8 line-up at IFA wasn’t limited to just the ATIV range; the company also had some interesting concepts to show, of which the most usable was a Dual-Display Notebook. Resembling one of Samsung’s slick Windows ultrabooks from face-on, close the notebook’s lid and there was a second display to be found, turning the machine into a slate-format tablet.

That arguably gives the best of both worlds: you get the convenience of a slate form-factor when you’re more interested in content consumption, and then a full keyboard when you’re looking to get some words down on (virtual) paper. It’s a similar concept as we saw Toshiba and Sony follow with their Windows 8 tablets, though those companies opted for a slider mechanism rather than a second display. Samsung also throws in its S Pen digital stylus, for notetaking and sketching. 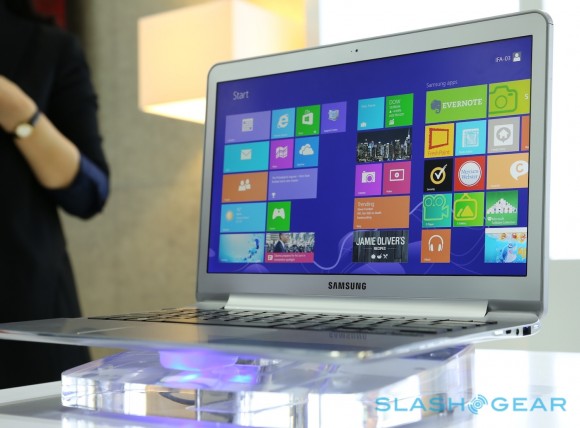 The downside to Sony’s strategy is weight. The base section of the notebook is as slim as a regular Samsung ultrabook, but the lid is considerably thicker than the norm; it has to be, to fit back-to-back displays. Although it didn’t tip back under its own heft, or prove too much for the hinge mechanism to keep the screen stable, you did notice it when lifting the concept notebook up.

Samsung isn’t saying whether the Dual-Display Notebook will ever get a commercial release, though the company was running IFA attendees through questionnaires about form-factors and expectations around battery life. Our guess is that the collective response to that will decide whether the concept makes it out of the labs or gets relegated to the back-burner.