3D TV was supposed to be the HDTV industry’s next “High Definition”, the technology that encouraged existing owners to upgrade to a shiny new set. That, though, hasn’t really happened Samsung admitted today: speaking at the IFA Global Press Conference, the Korean company confirmed that predictions for 2012 3D TV sales is just 30-percent across the industry, despite the lashings of hype.

In fact, Samsung says, relative newcomer Smart TV is likely to have double the market penetration of sales this year. “Smart is the king” the company says: 60-percent of the predicted 60m TVs sold in 2012 are expected to include some degree of smart TV functionality.

That echoes earlier comments by Philips about the adoption of smart TV it has seen, with 60-percent of the company’s smart-enabled sets having their web-connected features used daily. According to Philips, the most popular functionality so far is catch-up streaming, Video-on-Demand and social networking. 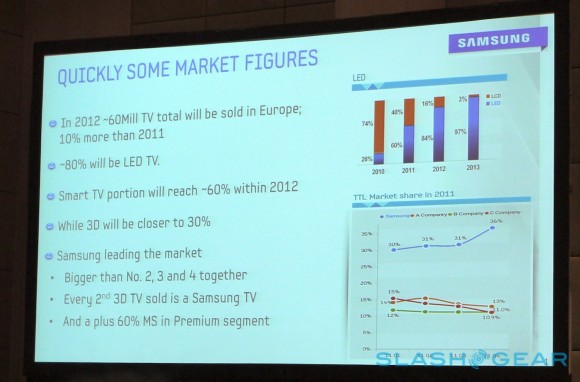 Price is likely to be a bigger limiting factor to 3D than other TV tech: Samsung uses active 3D for its models, for instance, which require battery-powered glasses and specially-modified displays. That adds to the price tag, which could well turn off potential buyers in-store.

Samsung itself has previously predicted smart TV sales of around 25m in 2012, though has been wary of suggesting the extent of 3D sales. Given the relatively slow upgrade cycle for expensive TVs, it could be a while longer before 3D hits the tipping point.