Samsung seems determined to stir up some tablet controversy discussion in Japan this week; after showing what looks like a prototype Galaxy Tab using a 7-inch Super AMOLED panel, the company has now wheeled out a 10.1-inch tablet mock-up using their new super-thin LCD. The 10.1-inch LCD measures a mere 1.8mm thick, thanks to a new manufacturing process using a resin substrate.

The display runs at 1024 x 600 – the same as the current Galaxy Tab and the new 7-inch Super AMOLED – with a 1,000:1 contrast ratio and 250cd/m2 brightness. Its the measurements which are vital, however: just 0.44mm thick and 28g when you discount the backlighting unit, whereas a regular Samsung LCD (with a glass substrate) would be 1.26mm thick and weigh 130g.

Samsung reckons it can commercialize the display within two to three years, but aren’t saying anything about the tablet mock-up; the company also had a notebook prototype using the same LCD technology. However they’ve also confirmed that various sizes of Galaxy Tab – including larger models than the 7-inch original – are on the roadmap for 2011, so it seems likely we could expect a similar form-factor to this mock-up at the very least. 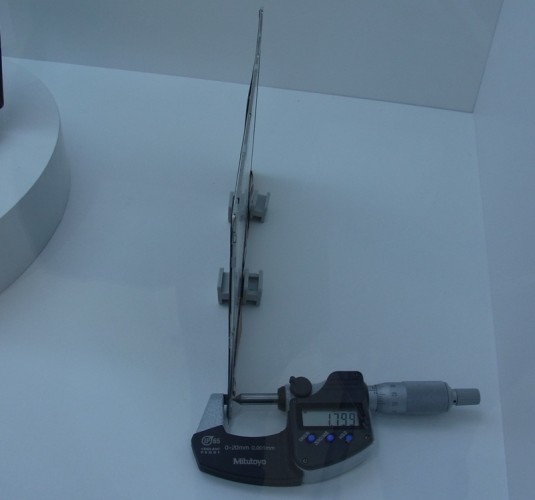