Today during their ongoing case against Oracle, Google‘s Larry Page was asked to say whether or not he originally expected Android to contribute greatly to the company’s total ad revenues. After asked by Judge William Alsup to answer the question directly, Rubin answered that he did not. If one takes a peek at some of the ad revenue numbers from the time of Android’s rise to power, one sees how easy it would have been to expect nothing other than a relatively tame future for the operating system.

Comparatively, back between 2009 and 2010, it was Apple that contributed the most to Google’s total ad revenue. As both Apple and Google rose at fantastic rates, the chart we’ve been presented today shows nothing other than the idea that though the rest of the mobile world might not have been jumping by leaps and bounds, it was Android and Apple that would be contributing the bulk of the mobile ad revenue to Google. What also appeared very clear at that time, though, was that Apple would dominate this space for the foreseeable future. 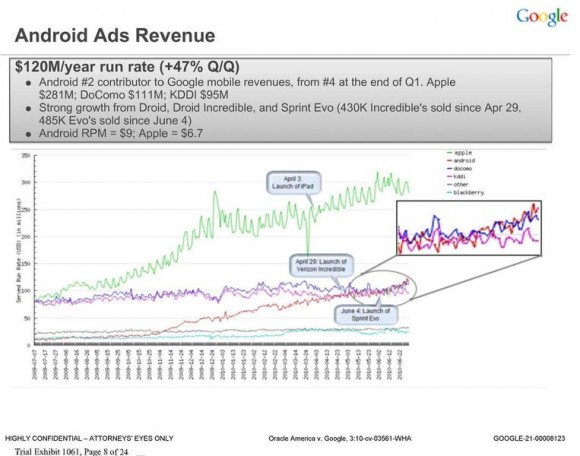 This is the first day in the collective history of tech writing and Android that we’ve been privy to actual numbers behind profits Google has collected from Android, so you’re sure to see more than a few analytical pieces popping up across the web throughout the week and the weekend. As we see how Google’s Android did for them back then, so too can we get a very basic idea of what they’re doing now for similar business. That said, Google has gone ahead and warned the whole tech and gadget blog world to keep in mind that they’re a very different company now than they were then – of course!