For the cost of the monthly subscription to a handful of streaming services, the new Roku Express 4K+ makes a strong platform play for being your set-top box of choice. As always, Roku’s pitch is flexibility and user-friendliness, only this time with a picture quality and system speed upgrade plus a handy voice remote. At $39.99, though, what’s left out is just as key as what makes the cut, and that’s before the challenge of getting every streaming provider to support all of your fancy new features.

Though not the only improvement for this generation, Roku’s addition of HDR10+ support helps set the Roku Express 4K+ apart. The reality, though, is that you’ll need a reasonably recent TV to actually see that: the company tells me that most Samsung, along with some Hisense and Vizio models, do, but my particular Hisense did not. You will, of course, need HDR support from your choice of streaming provider in order to make the most of that as well. 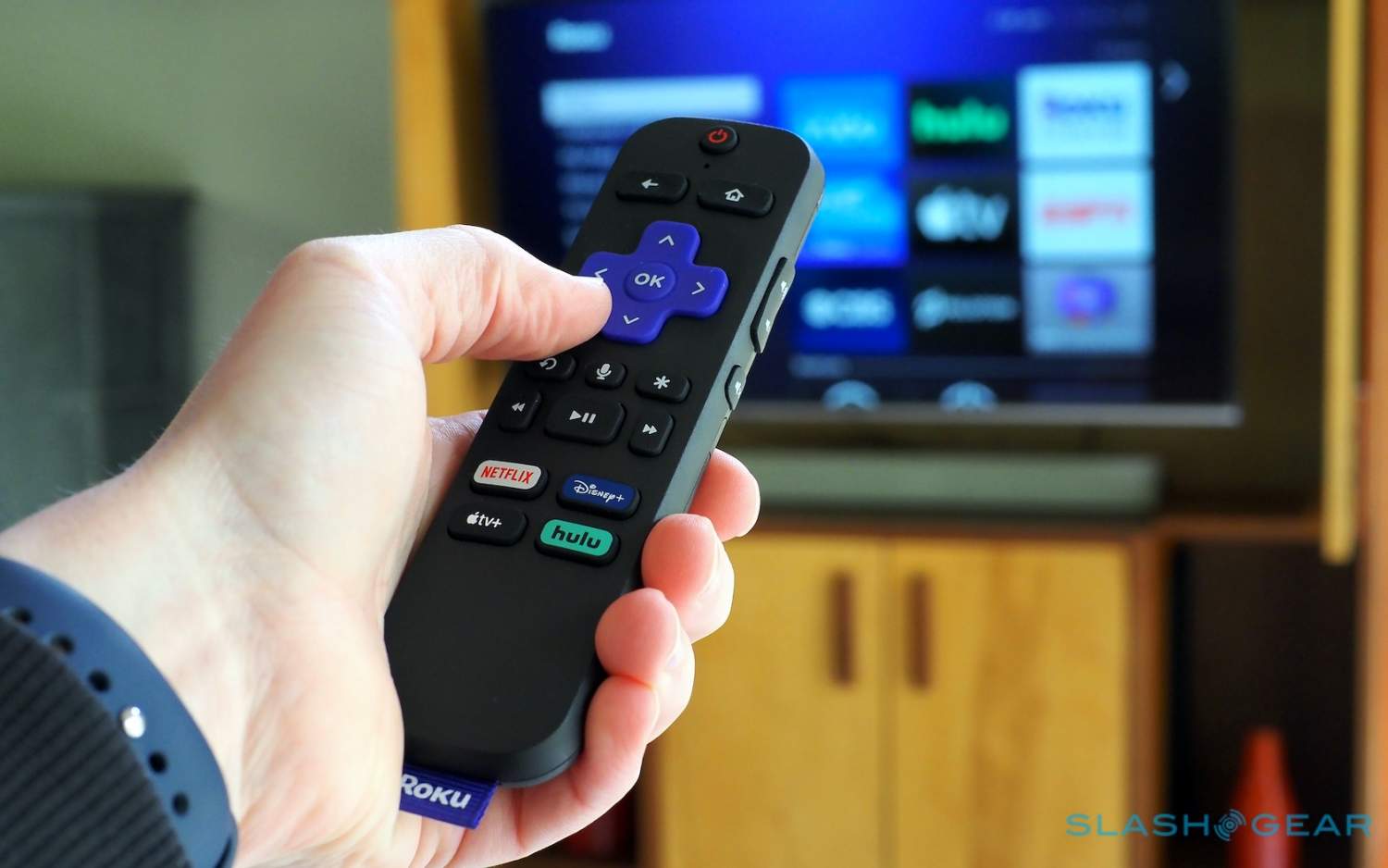 Sadly there’s no Dolby Vision nor Dolby Atmos support. Indeed, for audio there’s passthrough DTS and Dolby support, but no onboard decoding. If you want Dolby Atmos and Vision, you’ll need to cough up $99.99 for the Roku Ultra.

I’ll confess, setting up set-top boxes is one of my least-favorite things. Like most, the Roku Express 4K+’s physical setup is straightforward: there’s only an HDMI port on the back, plus a microUSB port for power, and a reset button. Roku gets bonus points for including a short HDMI cable in the box, which is more than some of its competitors deign to bother with, and a sticky pad to hide the box behind your TV if you see fit. USB-C would’ve been nice, though it’s less pressing than on, say, a smartphone given you’re only going to be connecting it up once. 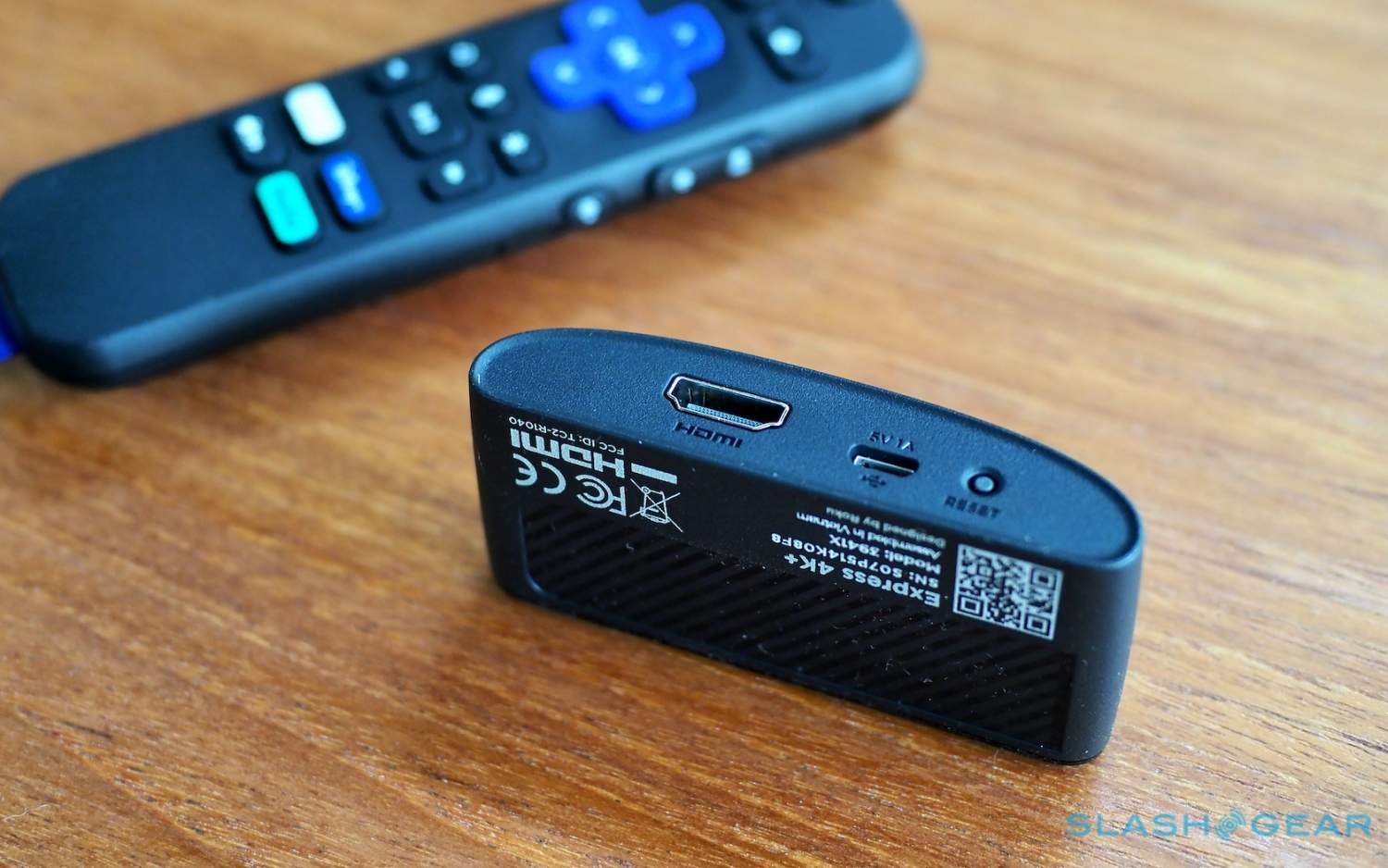 Automatic configuration via HDMI is a nice touch, and works well. With it, the Roku Express 4K+ can figure out by itself what maximum display settings your TV can support. It’s worth noting that not every HDMI input on your TV may necessarily support the maximum settings, so it’s worth checking which you’re plugging into first.

It’s the software, though, where things usually get tedious, or namely tapping in account credentials using on-screen keyboards. Roku’s system, though, actually works surprisingly rapidly: you can spell out your email address letter by letter with the Roku voice remote, after which point it emails you a link to finish the rest of the configuration and choose your channels (which is what the company calls the individual streaming apps). 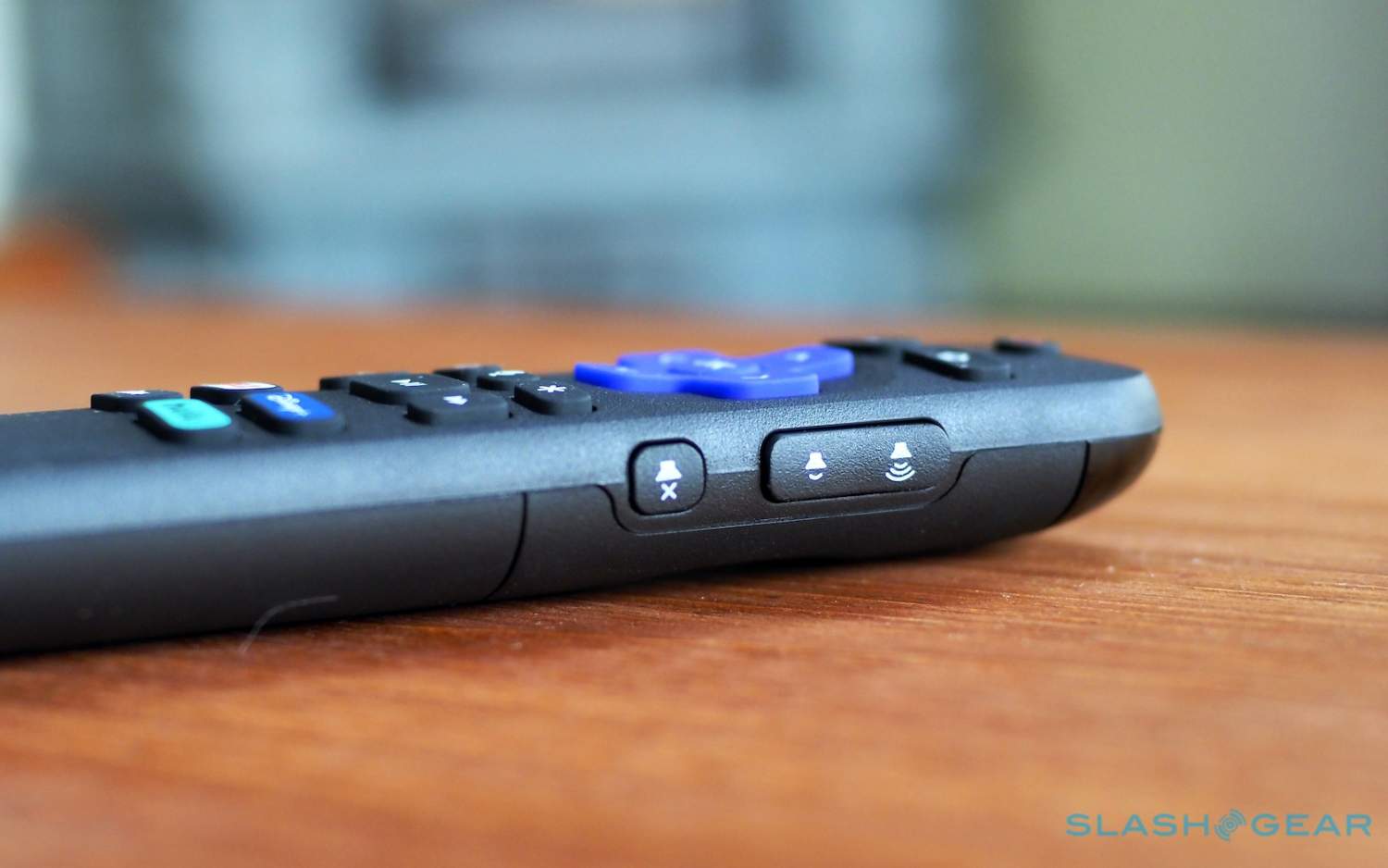 Most of those apps themselves, like Netflix, Amazon Video, Hulu, and others have improved the login process, too. Usually you just scan a QR code on your phone and then authenticate the Roku Express 4K+ from there. Of course, if you have a Roku account already configured, you can just log into that instead.

Roku’s voice remote is fairly intuitive. There are the usual buttons for navigation on the front, along with a power button for your TV, and both volume and mute buttons on the right side. At the bottom there are four preconfigured shortcut keys, for Netflix, Disney+, Apple TV+, and Hulu.

I use two of those four, but unfortunately you can’t remap the other buttons to different services. Honestly, while I’m sure the branding deal makes Roku some extra money, it’s usually quicker just hitting the voice control button and asking for the channel you want. 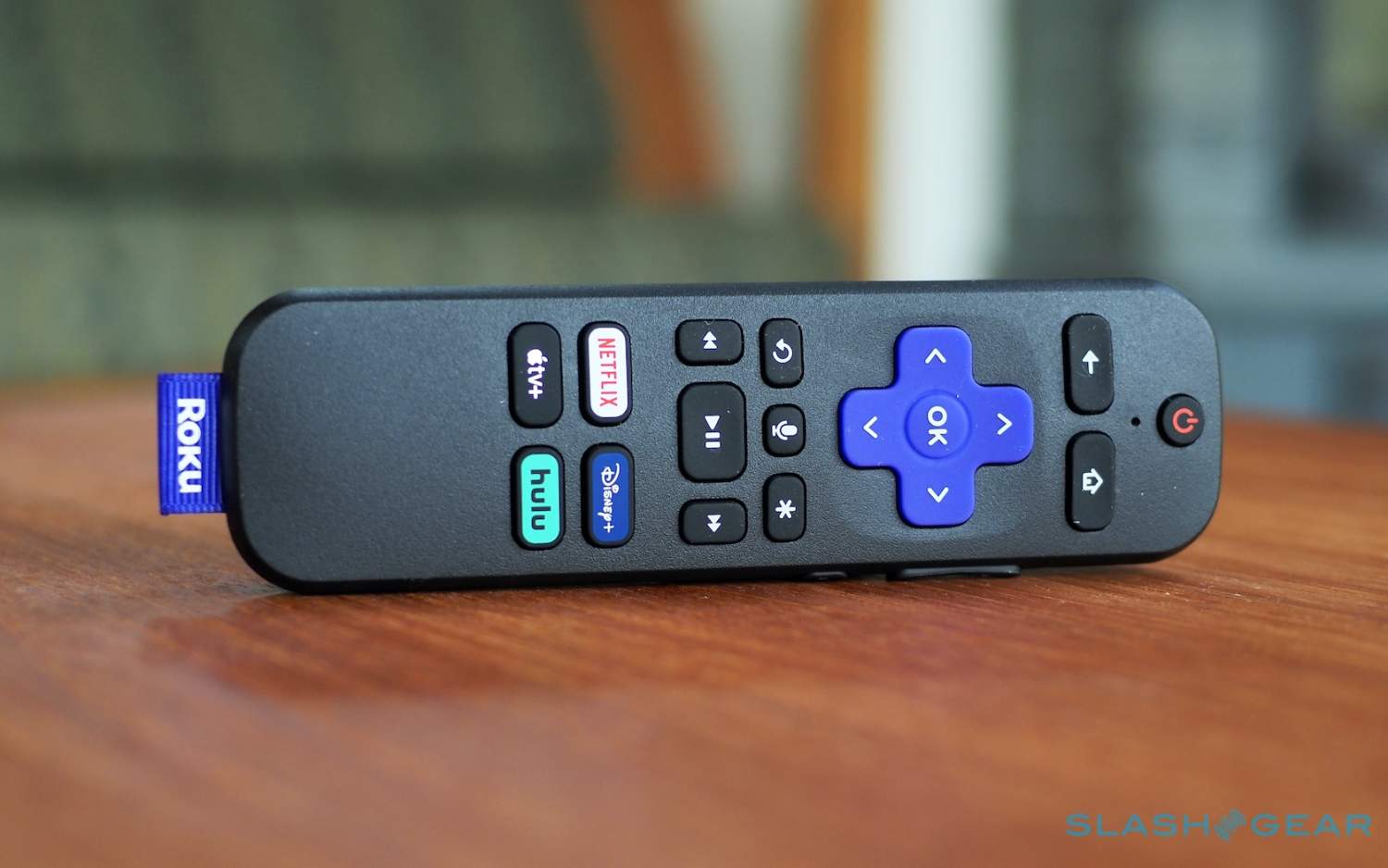 What makes a bigger difference for usability is the increased turn of speed, thanks to Roku’s new processor. The company hasn’t said just how much faster it is compared to the outgoing Roku Premiere, but day to day it definitely feels smoother. Channels load with a little more urgency, and everything feels snappier and more immediate: there’s less of that feeling like you’re navigating through molasses.

The same goes for connectivity. I have a fairly congested mesh WiFi network at home, though Roku promised better stability and speed thanks to an upgraded dual-band WiFi 802.11ac radio. Certainly, I didn’t notice any issues, and nor did I see the new automatic WiFi detection dialog pop up. That uses background bandwidth testing to check to see if you could be getting smoother streaming by switching between the 2.4GHz or 5GH bands, as long as they’re on the same network SSID as you’re currently using. 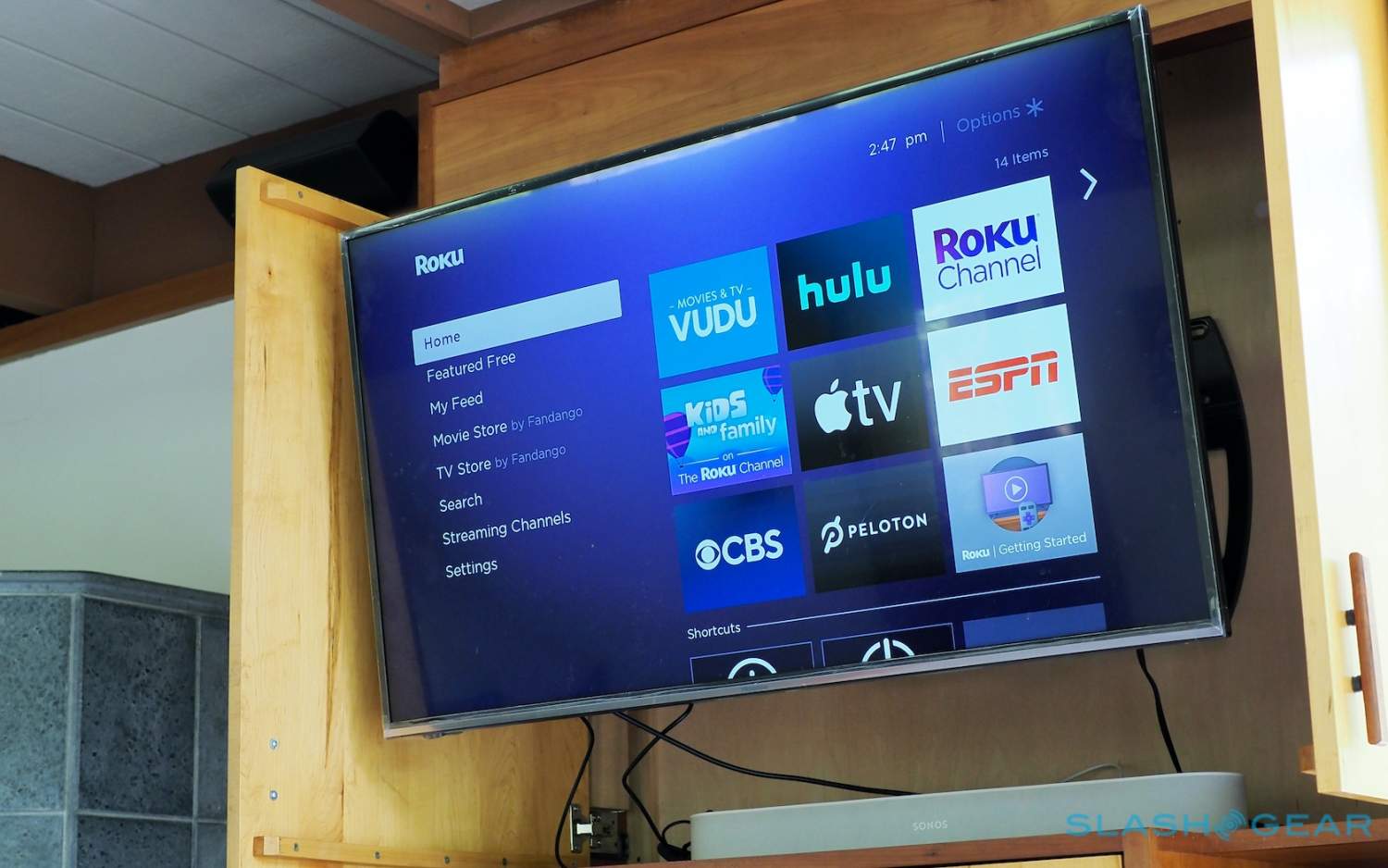 If things are really struggling, the Roku Express 4K+ supports microUSB ethernet adapters, though Roku will point you in the direction of third-party dongles for that. I didn’t need one, but it’s a good fix if you’re suffering with jerky playback or sluggish streams.

Roku OS 10 – which is preloaded on the Roku Express 4K+ and a free update to most of the company’s recent models – is an evolutionary rather than a revolutionary upgrade. If you’re a live TV viewer, for instance, you can customize the grid to hide the channels you never watch, or favorite your go-to picks. 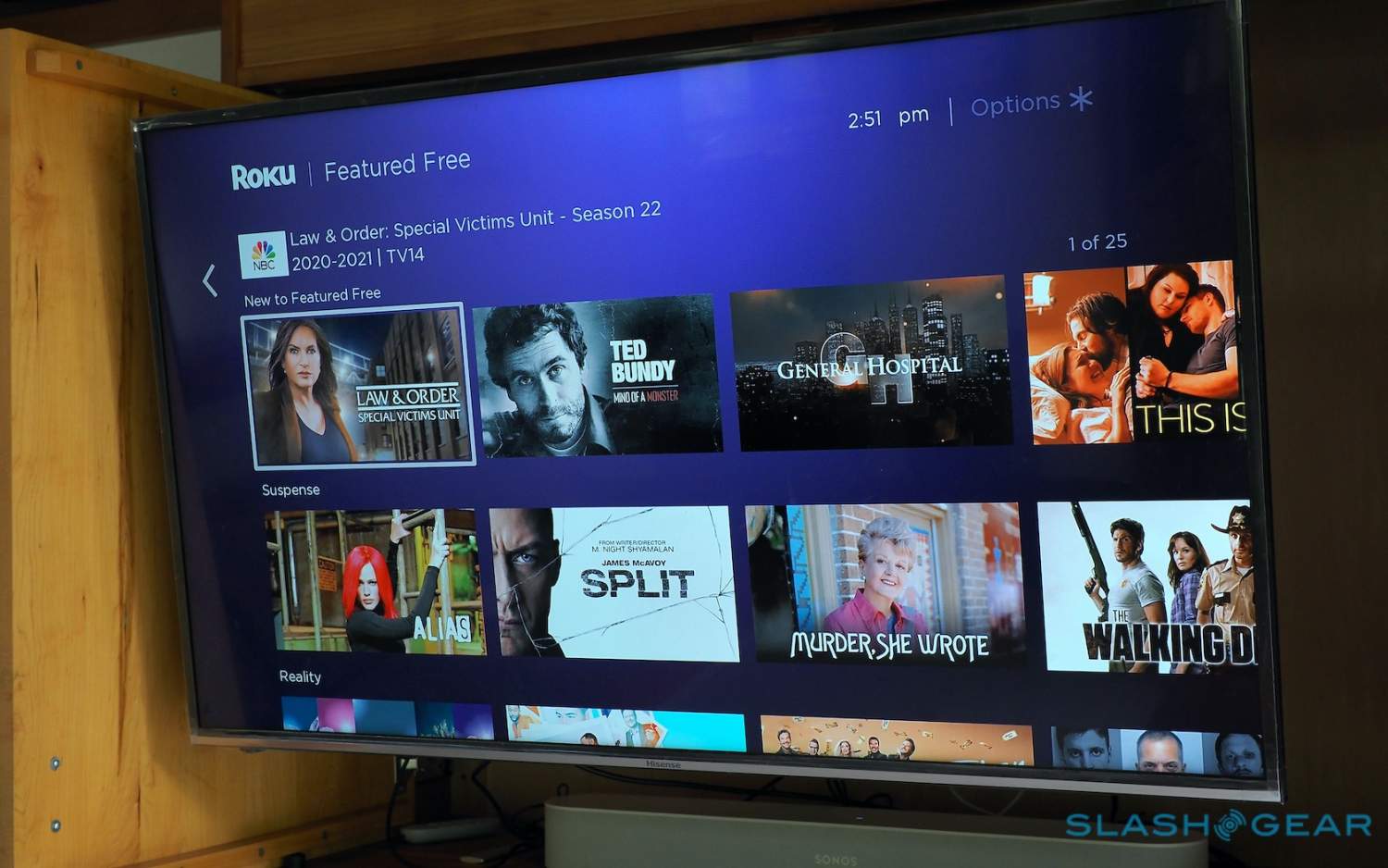 There’s also support for Apple AirPlay 2 and HomeKit. With the former, you can stream directly to the set-top box from an iOS, iPadOS, or macOS device, just as you would to a much more expensive Apple TV. With HomeKit, meanwhile, you can control the Roku Express 4K+ from Apple’s Home app – or, more accurately, you can power it (and your HDMI-CEC connected TV) on and off.

You could, for example, have a HomeKit scene turn the Roku off when you leave the house, or as part of a “goodnight” scene along with shutting off the lights and locking the doors. In short it’s not going to replace Roku’s own remote (or indeed its app, which also supports private audio listening which is a killer feature), but if you’re a HomeKit user it’s a welcome addition to the feature-list, not to mention a rare one for non-Apple streaming devices. 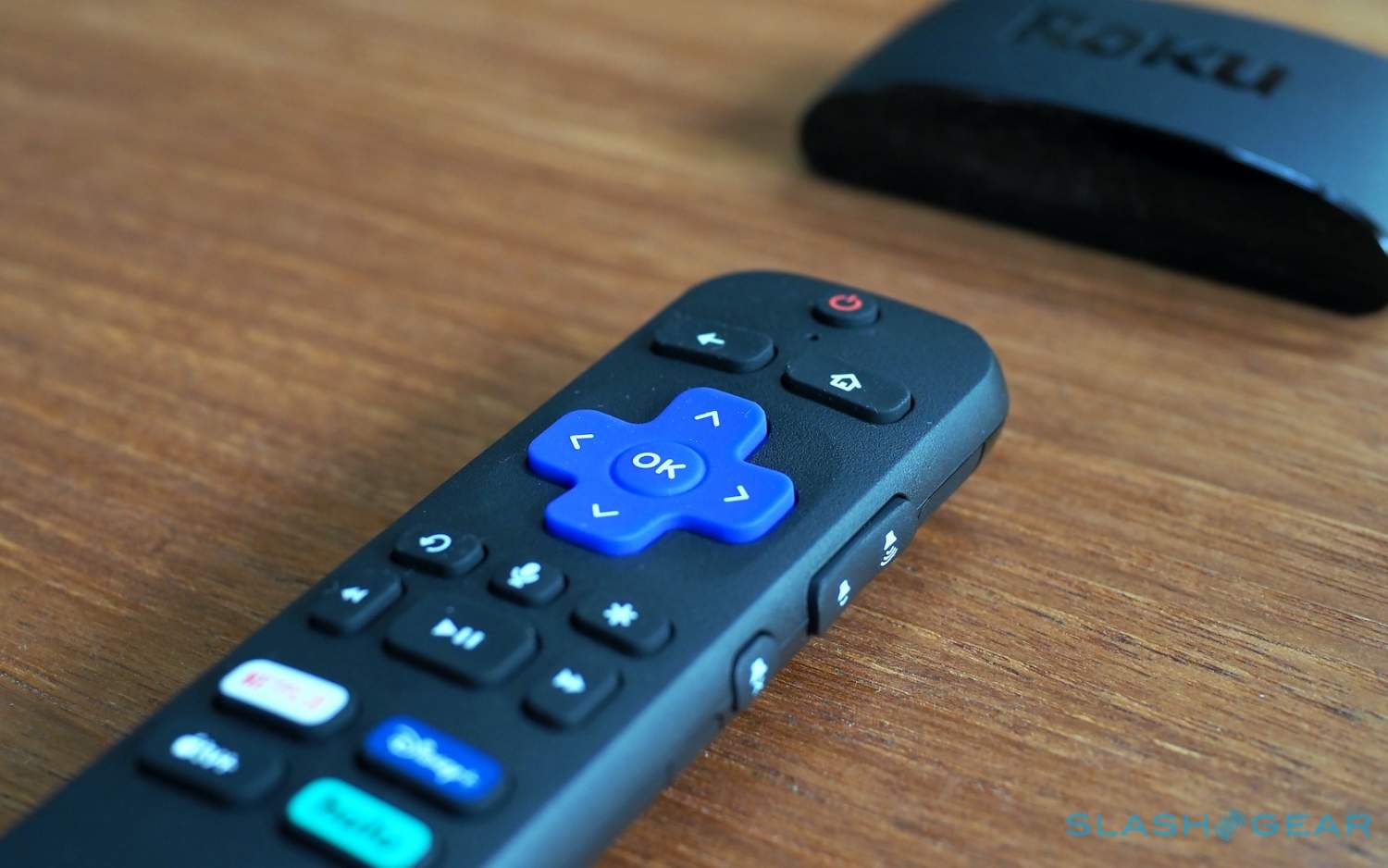 There’s also Amazon Alexa and Google Assistant integration, including the ability to ask for channels. If you have the Roku Voice Remote Pro, that adds hands-free voice control as well, plus a headphone jack for private listening, though at $29.99 it’s three-quarters of the cost of the Roku Express 4K+ itself.

Something I was looking forward to trying was Instant Resume, another new feature in Roku OS 10. It effectively works as an automatic bookmark for whatever you were watching, allowing you to pick up where you left off even as you switch between different services. 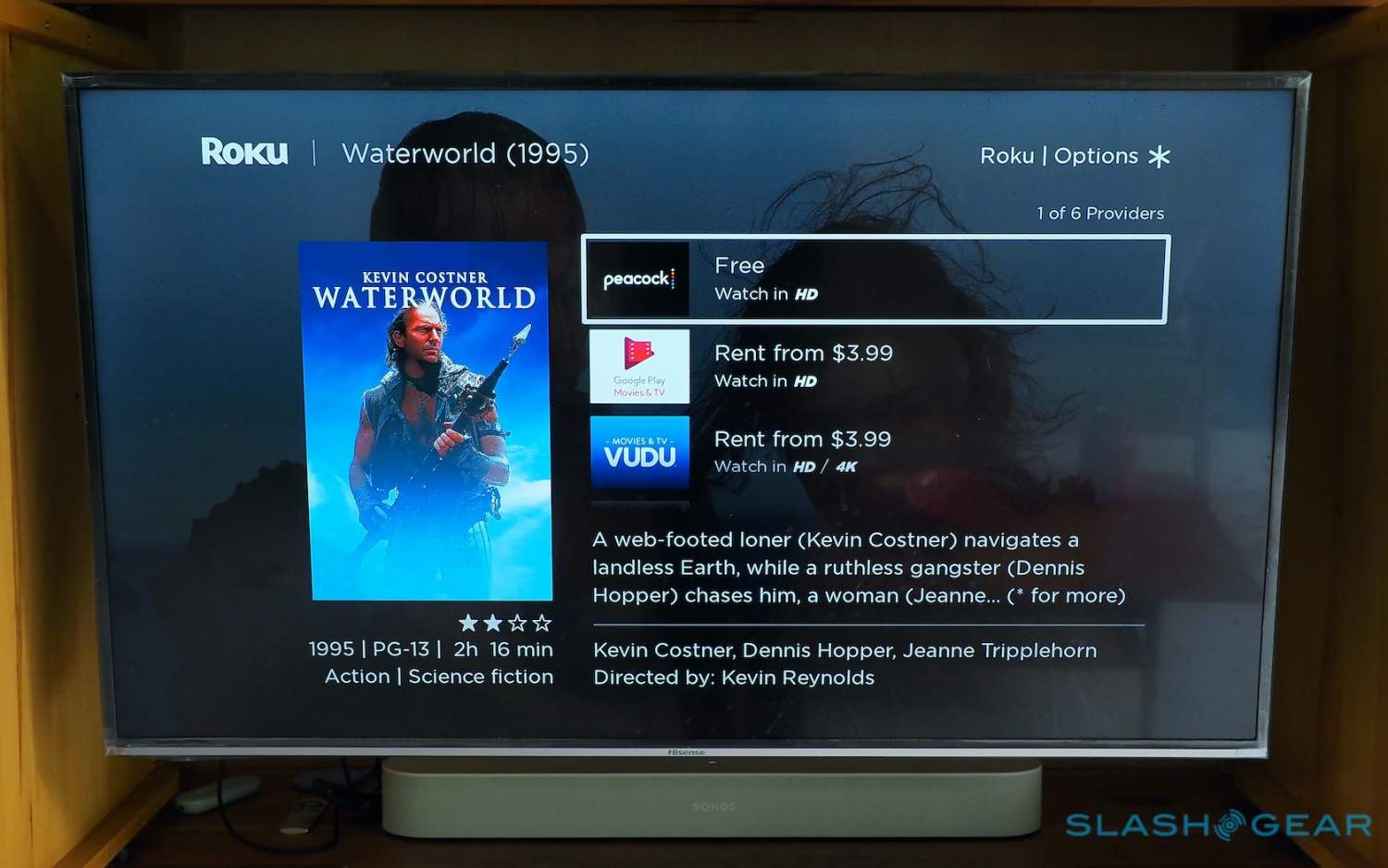 Unfortunately, Instant Resume needs specific channel support, and right now that’s not present on the bigger names in streaming. If you’re an A&E, ATT Now, Fox Business, Fox News, Fubo, FYI, History, Lifetime, Pantaya, Plex, Roku Media Player, Starz, StarzPlay, or The Roku Channel viewer, it’ll work. If – like me – you do most of your streaming through Netflix, Hulu, Amazon Video, or other services, then you’ll have to wait and see if they decide to support it.

The same goes for voice input in third-party app search. If you see a microphone icon there, Roku says, you can hold down the mic button on the remote instead of using the on-screen keyboard. Problem is, most of the big services I checked didn’t actually have that support yet; YouTube’s app did, but there was no microphone icon there to flag it. 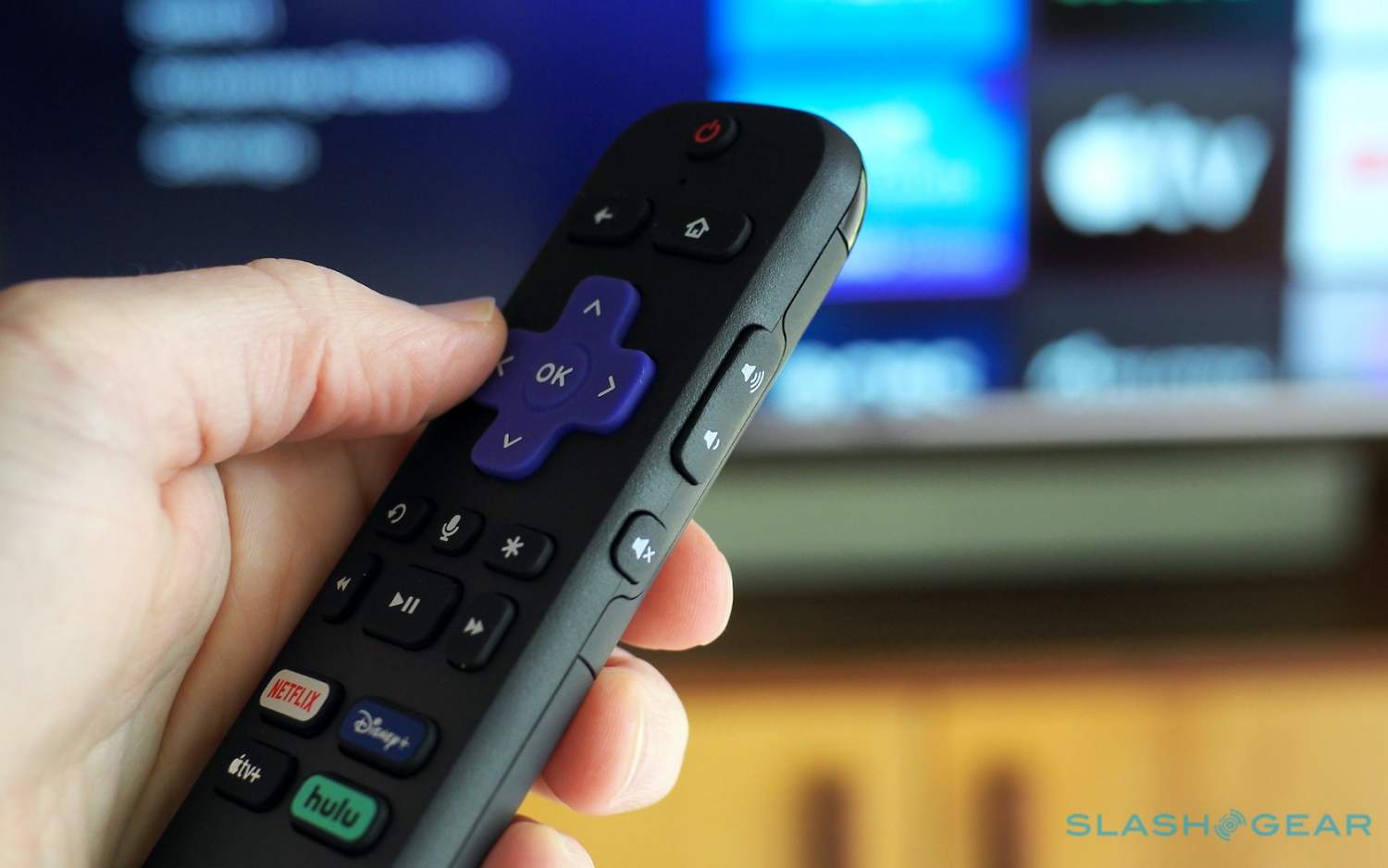 Even without some of the more ambitious features, however, there’s plenty to like about both the Roku Express 4K+ and OS 10. Channel switching is fast, and individual streaming apps load quickly. I like how Roku’s revamped voice search serves up its results, too, though at first it’s a little confusing.

Voice search can pull results from the channel you’re currently watching, but it’ll take you out of that channel to show you its findings. A search for “Queer Eye,” for example, too me out of the Netflix app but then offered me the Netflix series plus a free documentary from another source, along with a behind-the-scenes movie about the original show from the early 2000s. If there are multiple viewing options you’ll see them all listed, with pricing or subscription requirements as appropriate; click through and you’ll be taken directly to the listing page. 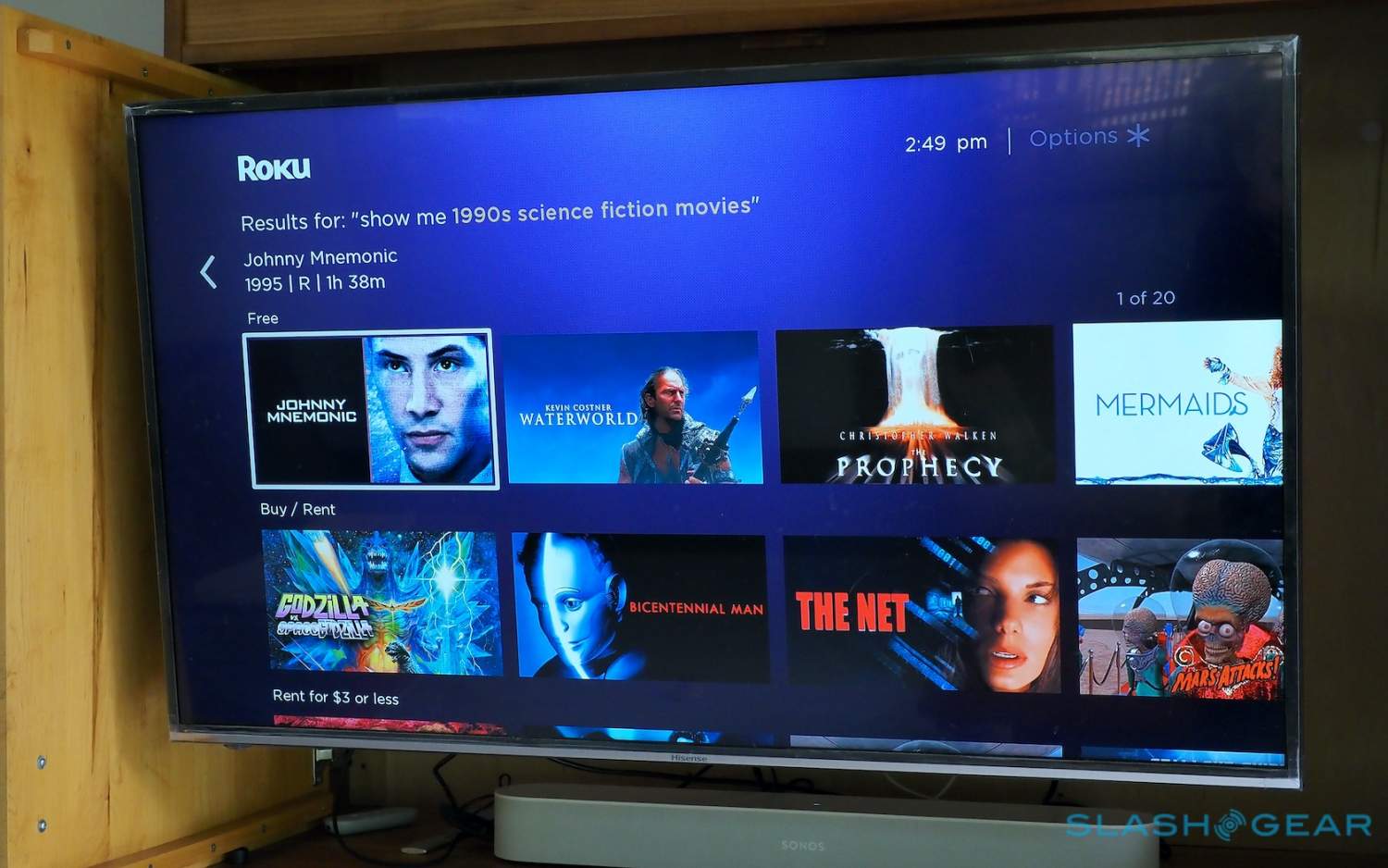 If you’re searching from the main menu, meanwhile, Roku categorizes things fairly helpfully. First it’ll highlight free ways to watch the shows and movies it finds, alongside paid options. It also has sections for lower-cost purchases and rentals: if you really want to watch some 90’s sci-fi, for example, but don’t feel like spending over $3 to do so, there’s a category for that.

Roku’s search is a little less adept at dealing with natural language queries than rivals like Apple, Amazon, or Google. A search for “French-language movies” got me no results, whereas “movies in French” had plenty. Siri, Alexa, and the Google Assistant are generally clever enough to parse the request regardless of my phrasing.

How much you’ll enjoy many of Roku’s bigger features on the Express 4K+ hangs on which third-party services you subscribe to. HDR10+ support is great, if you have a compatible TV, and are a customer of a streaming provider with HDR10+ content. Availability of Instant Resume and in-app voice search is much the same. 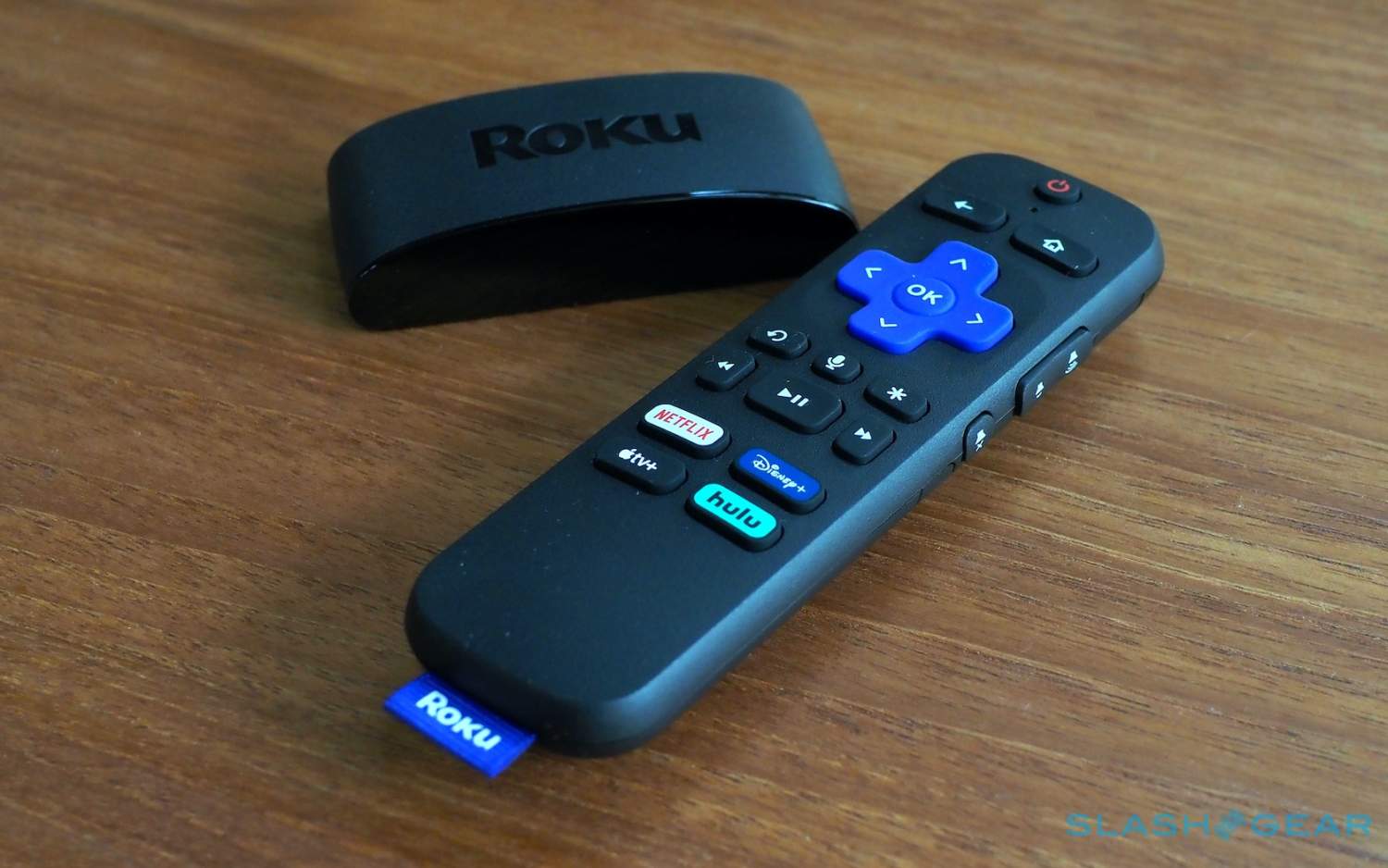 Factor in the absence of Dolby Atmos and Dolby Vision support, and you’re really paying for Roku’s channel flexibility and its simplicity of use. They’re not small factors, mind: Apple’s latest Siri remote has only just got around to adding TV power and mute buttons, and you’ll pay more for the Apple remote alone than the whole Roku Express 4K+ will cost you. I think Roku OS 10 is a little more straightforward visually than Google TV is, as well, and of course you get the convenience of AirPlay 2 streaming as well.

At $40, then, there’s a lot more here to like than there is to complain about, I think. Better WiFi, faster navigation, and that handy voice remote make the Roku Express 4K+ easier to use and less frustrating when you just want to kick back and watch something. Those with more ambitious home theater setups will still want to look to more feature-rich models, but for easy streaming on a budget Roku’s option is tough to beat.