Rivian has opened up the configurator for its R1T and R1S electric pickup and SUV, allowing preorder customers to pick out their options and get final pricing on the upcoming EVs. Deliveries of the two new all-electric vehicles won’t begin until midway through 2021, Rivian has confirmed, but it’s a chance to see just what the US automaker has in mind.

We got a taste of that last week, when Rivian confirmed the various packages it would be offering on the two models. Both share the same underlying electric architecture – which Rivian calls its “skateboard” – and initially they’ll both have the same drivetrain, in fact. 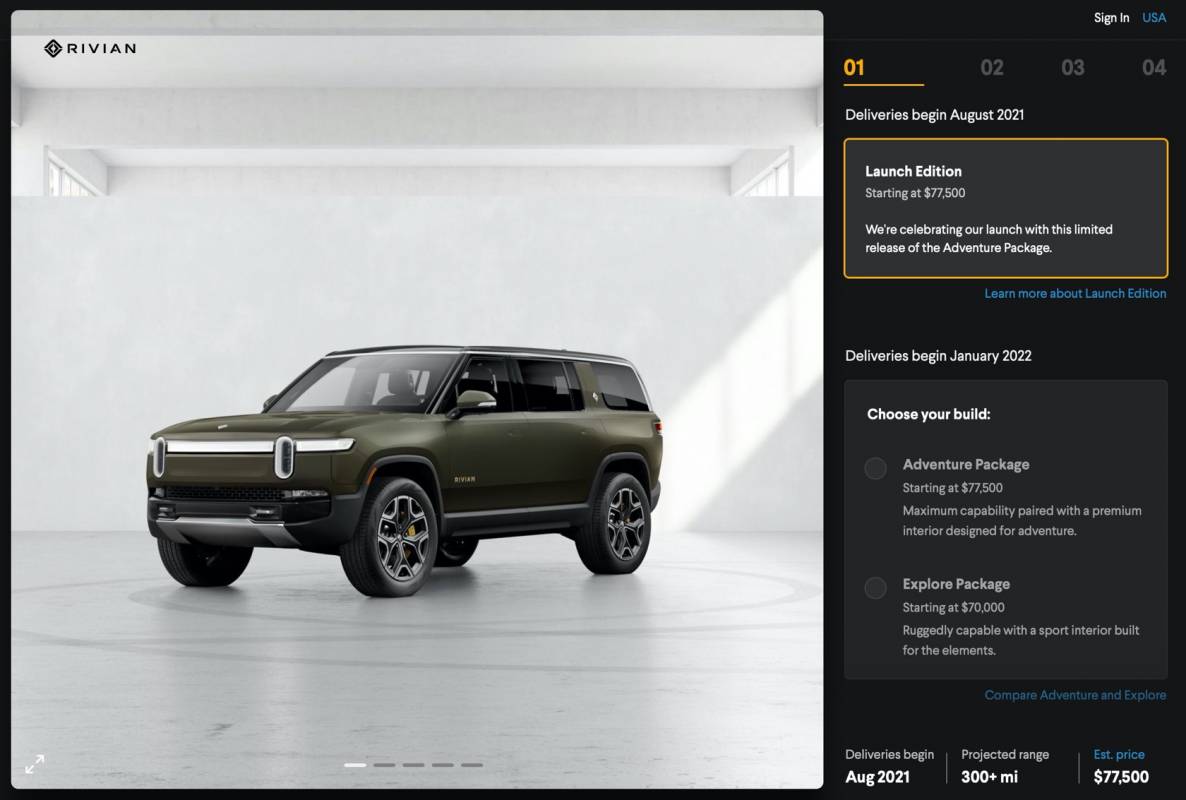 That will use a quad motor system – with which the EVs will be able to effectively spin on the spot in “Tank Turn” mode if required – good for 0-60 mph in 3.0 seconds, Rivian has said. The R1T will be able to tow up to 11,000 pounds, while the R1S will tow up to 7,700 pounds. Both can wade through water over three feet in depth. 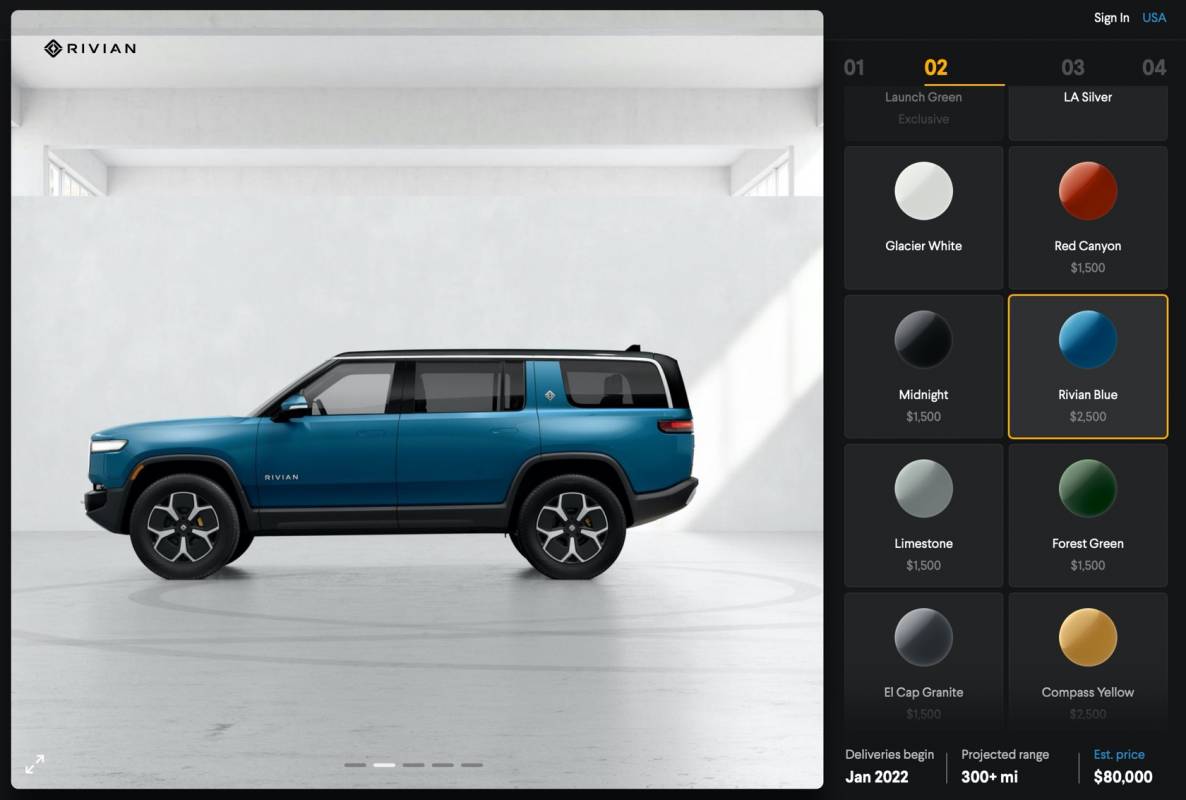 As we reported last week, there’ll be three different packages offered on each model. Initially, they’ll arrive with a Launch Edition – the $75,000 R1T Launch Edition in June 2021, and the $77,500 R1S Launch Edition in August 2021 – with a number of special and standard features. Launch Edition cars will offer a special “Launch Green” paint finish, for example, though buyers will be able to choose from Rivian’s other finishes if they prefer. 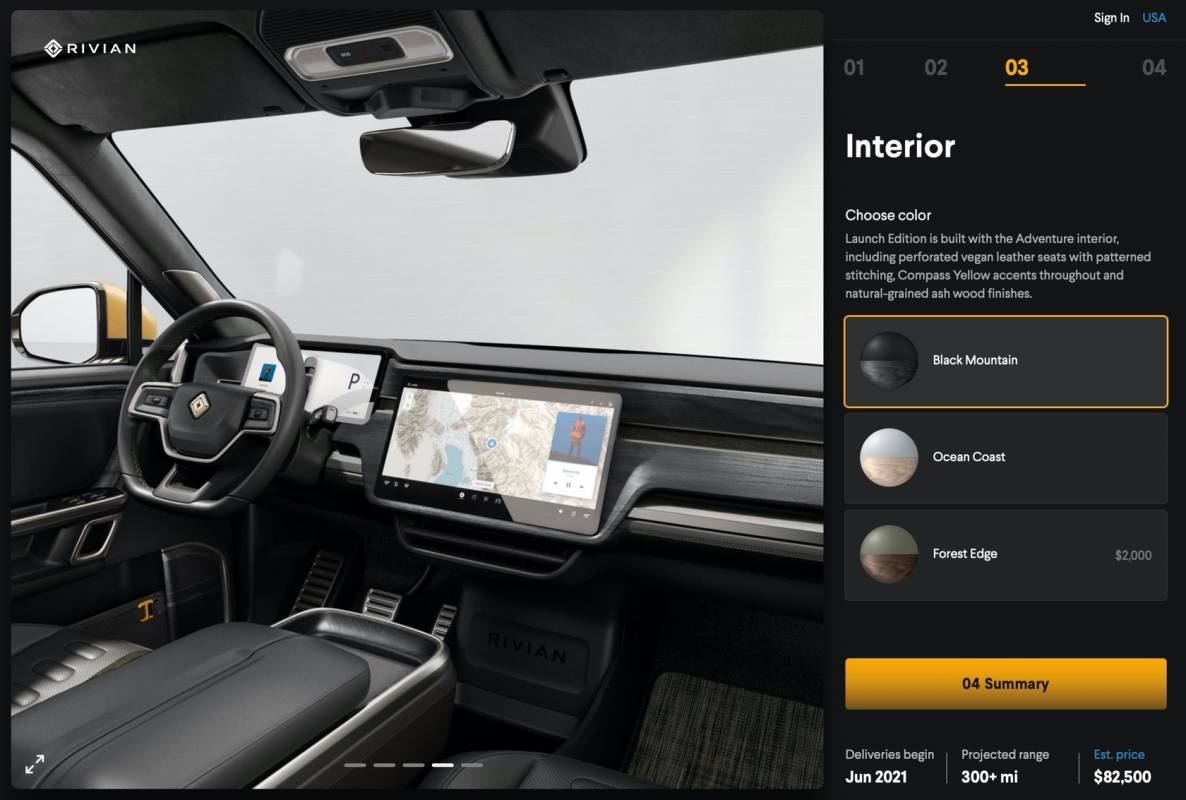 They’ll also have special interior badging, and a choice of 20-inch All-Terrain or 22-inch Sport wheels. The latter will be offered on the R1S and R1T Adventure and Explore trims, but for an extra cost. 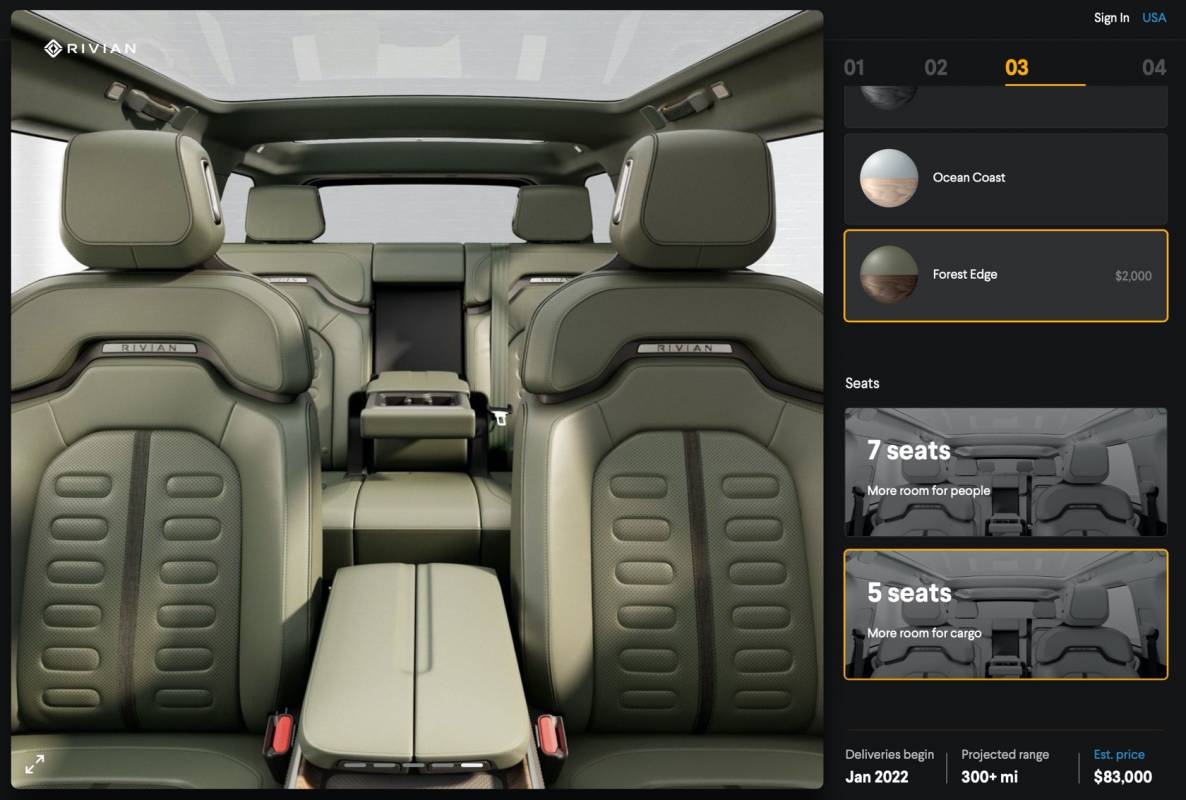 The configurator has confirmed some other details, too. In the case of the Rivian R1S SUV, for example, it’ll cost the same whether you opt for the five or seven seat configuration. The R1T Pickup will only be offered with seating for five. 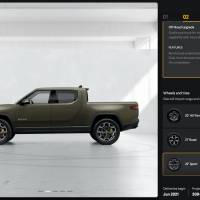 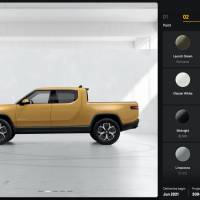 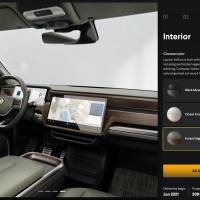 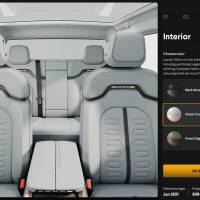 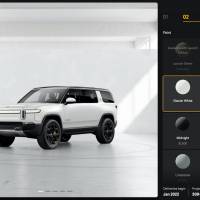 Another difference is battery size. The standard battery will be Rivian’s 300+ mile “Large” pack, and indeed that will be the only option for the R1S according to the configurator.

The R1T Adventure and R1T Explorer, however, will be offered with a “Max” pack instead. Priced at $10,000, the upgrade will boost range to a projected 400+ miles, Rivian says. 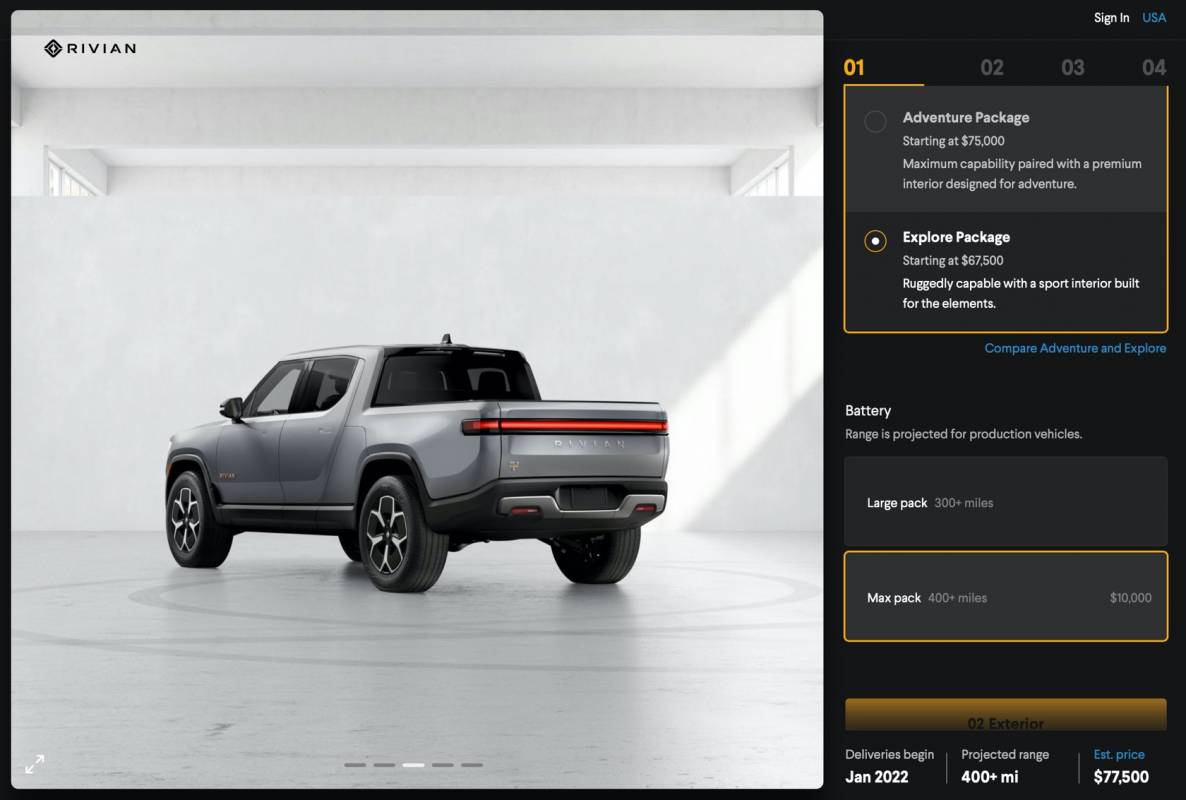 It’s not the only addition that the pickup gets but the SUV misses out on. While most of the options – like a powered tonneau cover – are functional, the “Camp Kitchen” option for the R1T is a little more fun-focused. Sliding out of the side storage compartment, which is positioned just ahead of the rear wheels, the $5,000 addition includes an induction cooktop and a built-in sink fed from a 4 gallon water tank. The cooktop and the sink’s pump are powered from the R1T’s own battery, as you’d expect, and Rivian will also offer an optional 30-piece prep and cookware set from Snow Peak. 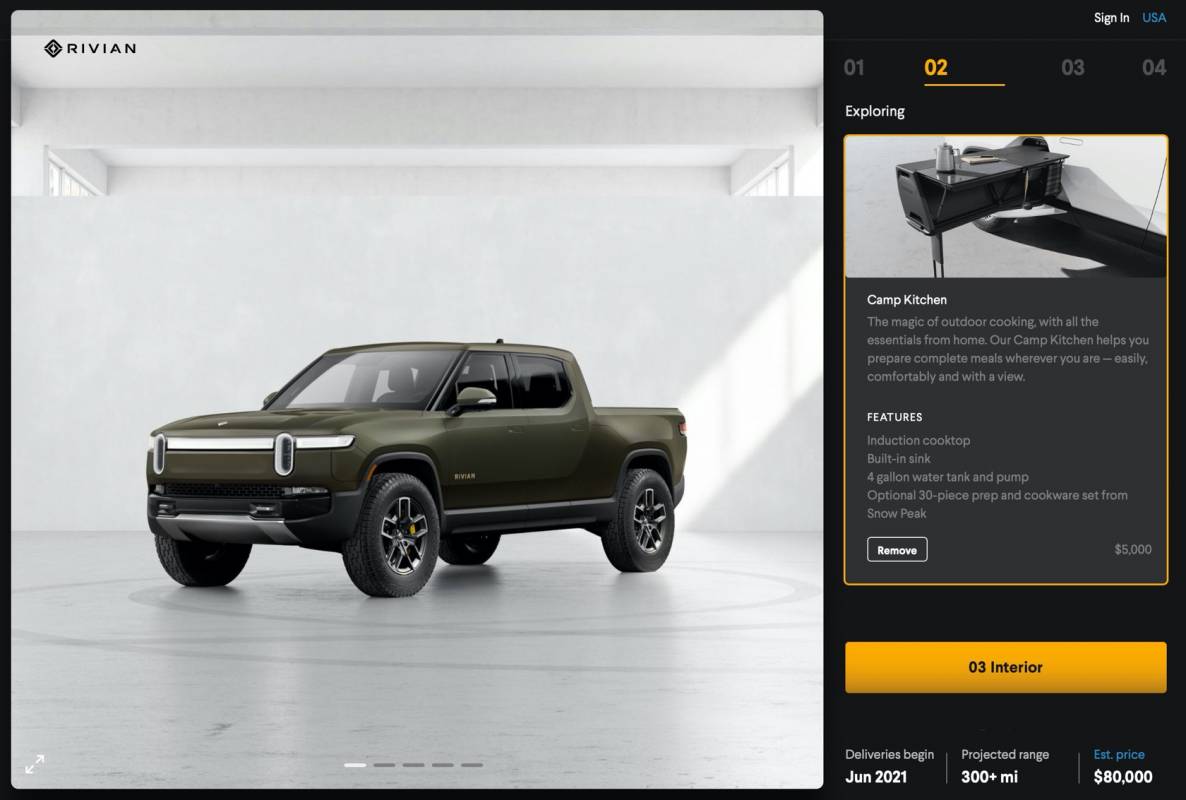 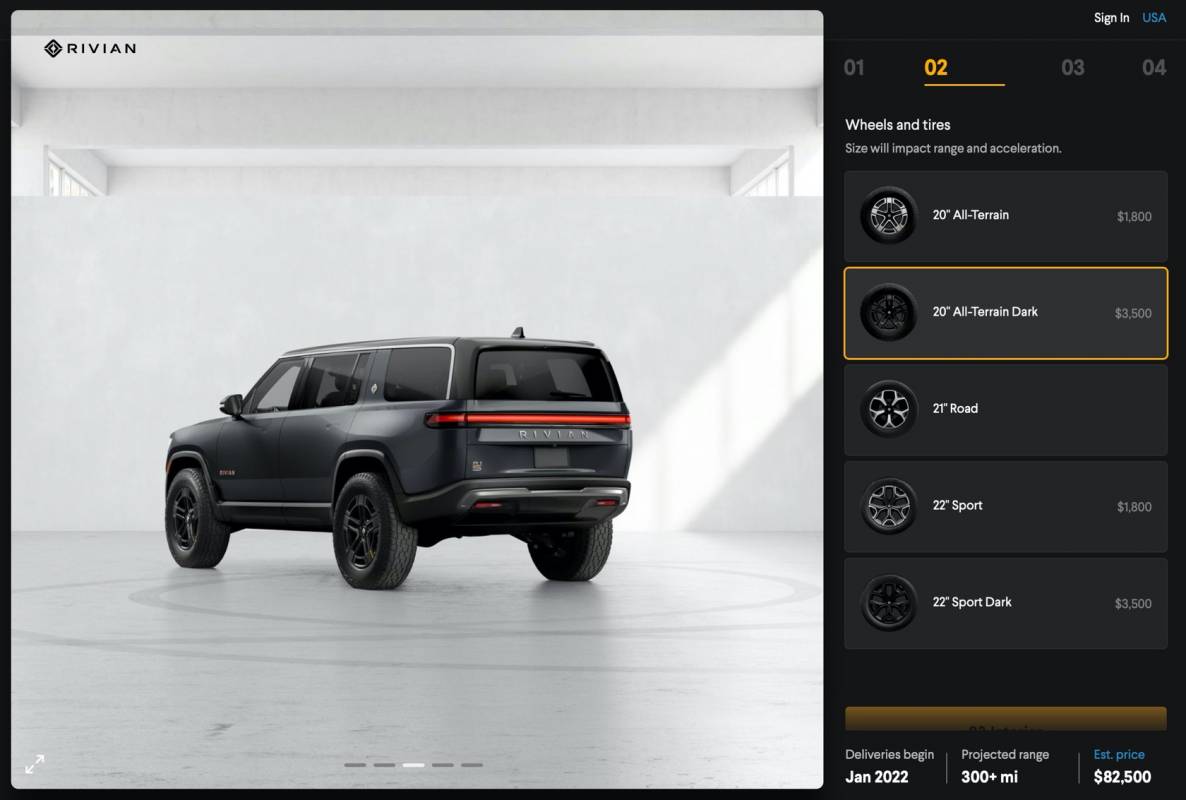 Preorder holders – who already put down $1,000 to stake their place in line – can finalize their order today. Rivian says that the configurator will open to the general public from November 23.