Unfortunately, Shkreli might no longer actually have the physical album itself – but that might not matter. Shkreli was convicted in court in August of this year and jailed over securities fraud. He defrauded investors of two hedge funds and schemed to control shares of the company Retrophin Inc. According to Bloomberg, he’s being held in federal lockup in Brooklyn, New York – just blocks and a bridge away from Staten Island, the original home of the Wu-Tang Clan.

While a $1-million USD sale of the Wu-Tang album (otherwise known as the Wu-Tang Secret Album) apparently landed on eBay earlier this year, the sale never went through. According to HipHopDX, the auction was bogus. Instead, Musician and Wu-Tang collaborator Matthew Markoff (Matt “M-Eighty” Markoff) suggested he’s in the running to buy the album – or at least was, instead of the eBay auction winner.

Markoff had plans to release the album to the general public once he had his hands on it. That was until now – today – when a forfeiture submission was filed in court. Prosecutors with the United States Attorney for the Eastern District of New York in the case listed the Wu-Tang album amongst $7.4-million USD in assets to be seized. 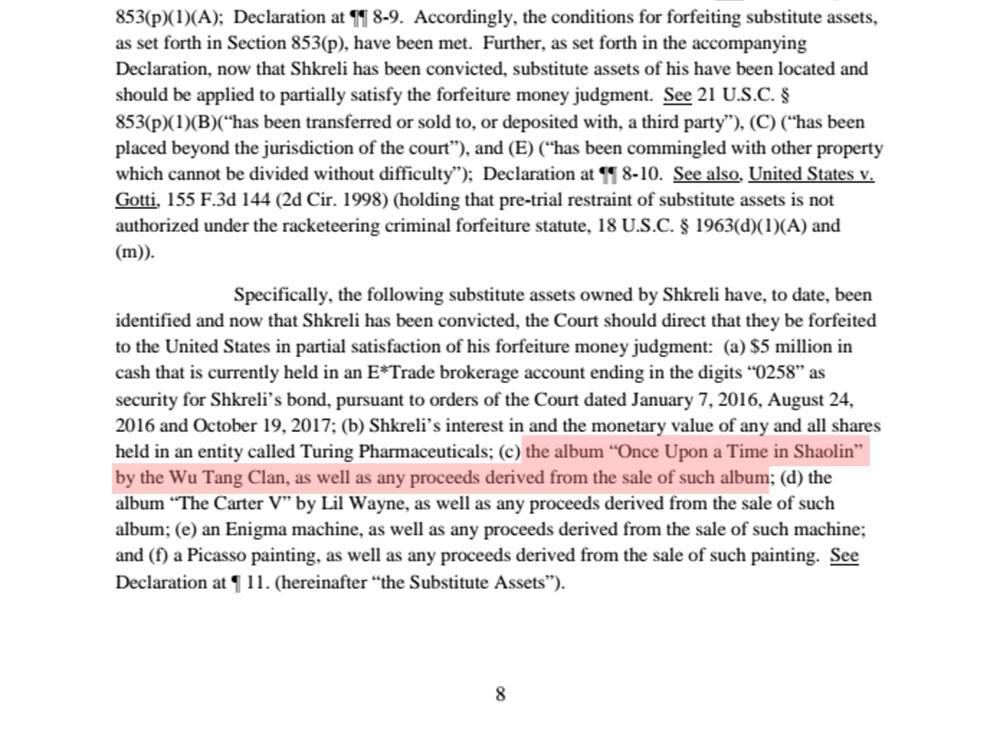 The screenshot of the document above is part of the full case filing sourced by Buzzfeed News’ Mary Ann Georgantopoulos. Also amongst the forfeitures is the album “The Carter V,” as they put it, by Lil Wayne. That album was famously put on hold several years ago and never released to the public, either.

SEE TOO: This is the Wu-Tang Secret Album

There’s a Picasso painting on the list too, as well as a WWII Enigma machine. This bonkers list of items constitutes publicly known items of value owned by Shkreli. As Indiana Jones would put it, THEY BELONG IN A MUSEUM. Let’s hope these attorneys feel the same way.

As the link above describes – the Wu-Tang album redefines what music is to the world of fine art. Delivered in unsurpassed fashion and style, this album is a one-of-a-kind work of a group of visionary creators. While the original sale as a singular piece of art was the most important part of the plan, the second phase should come to fruition as soon as possible.