Post-PC Acer: A world of Hybrids and Chrome OS

Is the PC dead? Not according to Acer, which brought a range of form-factors – from tiny tablets through to touchscreen all-in-ones – to New York City this morning, including a magnetically-docking Aspire Switch 10 2-in-1 and a potent Core i3 Chromebook. I caught up with Acer notebook chief Jerry Kao, to find out how the hybrid tablet is just the start of a new form-factor range for the company, as well as how Google dropped – and will reclaim – the ball in Chrome OS.

New Acer CEO Jason Chen was upfront about the trajectory of the PC market in recent years, tackling the idea that consumers have shifted into a “post-PC era” that prioritizes tablets and other atypical form-factors. However, Chen insisted, there remained some glimmers of hope – and of sub-segments with growth still in them – in the PC world overall, and it’s there that Acer aims to capitalize. 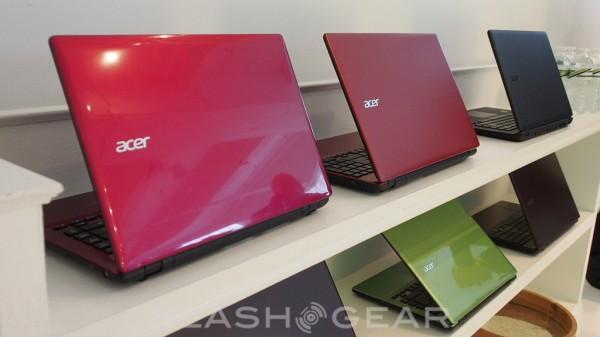 “There are a lot of different ingredients compared to before,” Kao concurred, suggesting to me that one niche yet to be fully explored is the 2-in-1, or hybrid. That – in the Windows world – has so far been treated as a notebook which just so happens to have a tablet mode, he argued, but lesser attention has been given to those coming from the opposite direction.

“Our surveys show, when people buy a 2-in-1, there are still two different approaches. The notebook guy wants a tablet, or a tablet guy wants a notebooks” he explained. “Starting from the different initial point, they maybe prefer different things.”

Different things, for Acer, means more wiggle-room to fit in new products, of course. Refreshingly, Kao doesn’t try to convince me that the Aspire Switch 10 is the hybrid for every user, conceding that those looking for the best typing experience may be frustrated – at least for now. 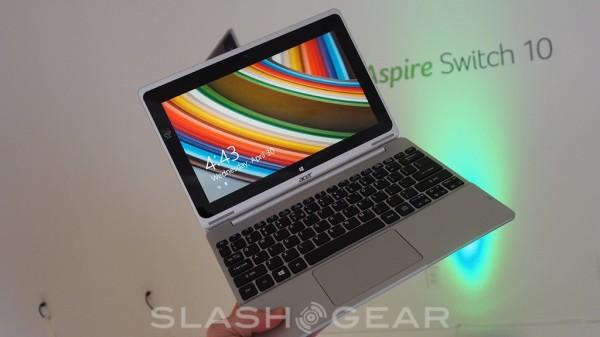 Others, he suggests, may come at it from the tablet direction, wanting just a little keyboard flexibility for the odd occasion they need to do extended typing; for that cohort, Kao says, the 10.1-inch hybrid could be ideal. Acer’s leaving nothing to chance, however, and the exec thinks it’s the magnetic Snap Hinge that holds the solution, not the specific hybrid we saw today.

“Actually, we want to achieve both sides, for [Switch 10],” he explained to me. “If you’re talking about form-factor, maybe more tablet users are going to love it. But, if you’re talking about the switchable feature, this is actually the easiest way to switch your notebook to tablet. So, we’re still thinking that we want to approach two sets of people: for the people who are traditional notebook users but want a tablet, we have the most switchable usage model for that. Easily transfer between the two. And for the people who are still tablet-oriented, 10.1 is the appropriate size. But I confess that, for people who want the best typing experience, we don’t have it. To be honest, 10-inches cannot be a full-sized keyboard. That’s the reason that we won’t just limit our screen size to this in the future.” 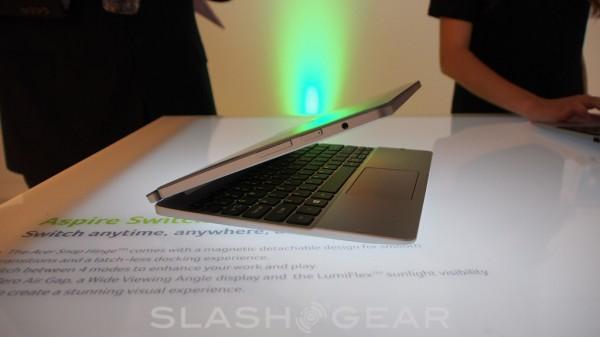 No small amount of work has gone into the Snap Hinge system – which does indeed make un-docking and re-docking the tablet section more straightforward than the latched approaches we’ve seen from other manufacturers – and I was curious whether Acer was considering using it for something more than just a keyboard slice. Was Acer planning a range of gaming pad attachments, perhaps, or a speaker-dock?

“We are just at the thinking stage, we don’t have any solid plans,” Kao conceded, “but, this is something we’re brainstorming right now. It’s time-consuming to think about something like a speaker.”

Would Acer consider licensing out the connector and attempt to follow Apple in building a thriving third-party ecosystem of accessories, using Aspire Switch’s Snap Hinge rather than Lightning? 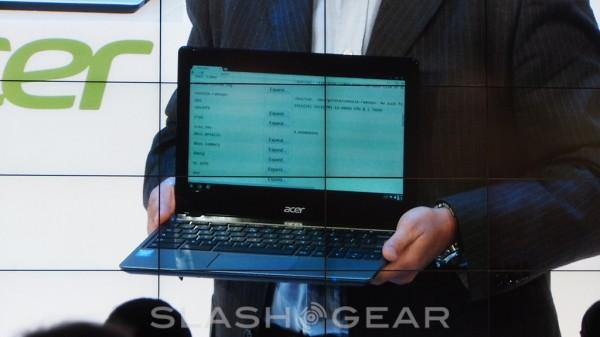 Acer’s other main surprise at the show was the sneak-preview of its new Chromebook, running an Intel Core i3 processor for the first time. The Chrome OS notebook itself isn’t due for release for another few months, and indeed Acer quickly whipped away the prototype today before anybody could get their hands on it. Still, it does raise the question of whether Google’s cloud-centric platform really needs that sort of mainstream power, something I challenged Kao on.

Does Chrome OS really need the power of a Core i3 processor?

“Acer’s differentiating point from other Chromebooks is very simple: performance,” he argued. “That’s the reason, in the C720, even as a Celeron, it’s a Haswell Celeron. Compared to our competitors, they’re on ARM, or Bay Trail.“

“I think, more and more users after trying the C720, think the performance may not be enough. It depends on usage model. For instance, if you’re using Hangouts for a video conference, it’s a totally different experience with Core i3. But for general usage, like data access or downloading from the cloud, you may not feel a big difference, that’s true.”

While so far Chrome OS has been predominantly known for undercutting Windows 8 based notebooks, Kao told me he believes those cheaper models are just the gateway to Google’s broader plans for the platform. 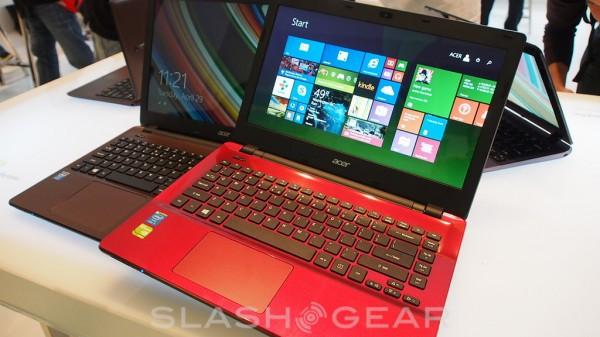 “The reason is that more people – including Google – want to differentiate from Windows,” he told me. “An engine that is capable to do anything users want, that is what Google and Acer are trying to do. We will have the lower CPU later, that is on our roadmap.“

With the Aspire Switch 10 fresh on my mind, and long-swirling speculation of a Chrome OS tablet, I pushed Kao for more details around form-factors on that roadmap. He was quick to shoot down the idea of a Chrome OS 2-in-1, however.

“Theoretically, yes,” he told me, on whether Chrome OS could support a docking keyboard design. The sticking point is Google itself.

“Chrome OS is different from Windows, it’s more closed,” the notebooks exec explained. “Actually, all the Chromebook players, every image – the software – needs to be Google-approved, and Google-prepared. The components in a Chromebook, they’re all selected by Google. In the notebook world, for example, for the WiFi you could have a Sierra solution, or a Broadcom solution, whatever. But in Chromebooks, no. There’s a list from Google, and you need to select from those things. Otherwise, Chrome OS won’t support it. If Google has no resources or no plan to do it, nobody can make it.” 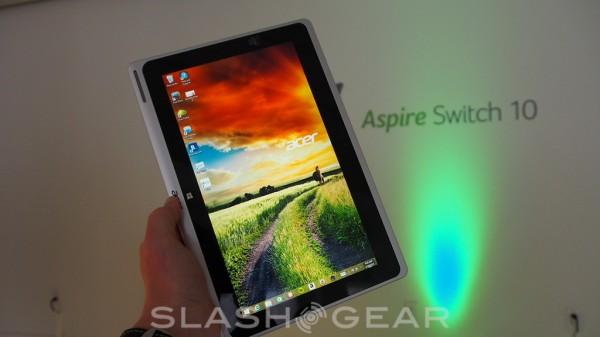 The knee-jerk reaction to a closed platform is to deride it, but Apple has made a good business of tightly controlling hardware and software on both Mac and iOS. Does Kao believe it’s in Chrome OS’ best interests too?

“I think maybe yes,” he said, clearly weighing his words. “I think Google actually already has a lot of applications, and they keep improving. When people start to use it, and when people have more and more applications – either user-friendly, or innovative, or just “wow, is that on Chrome OS?” – then people will be more interested in buying a Chromebook. For example, Google Maps, that experience in Chrome is a real difference. People will eventually want to buy into that experience.”

That’s not to say he’s satisfied with every aspect of how Chrome OS has tackled the market, blame for some of which he lays at Google’s feet.

“To be honest, in my personal opinion, Google did not do a good job in terms of educating the end-user to love Chrome,” he admits, though quickly follows with praise for the platform’s own stickiness once users have actually experienced it.

“Whoever uses a Chromebook, whenever they’re enjoying a Google application, they have loyalty to keep using Chrome. As a simple example, for Windows, if you want to change your notebook, it’s very time-consuming; for Chromebook you just log in, everything’s you! All those experiences are not difficult for an end-user to experience, and once they experience it they love it.”