Today we’re looking up close and personal at the newest expansion for Pokemon cards, aka Pokemon TCG: The Card Game: Sword & Shield – Darkness Ablaze! This set will be released to the public on August 14, 2020. We’ve got early access here so you can see what some of the most awesome cards look like and what’s included in the set before said set hits stores.

First take a peek at the two sorts of standard shiny foil you’ll be seeing in this set. The patterns for this set remain the same as they were with the past couple of sets for Sword & Shield. On the left you’ve got the standard rare foil Blaziken, complete with the piano keys of shiny foil in the card’s main artwork. On the right you’ll see the reverse holo, or reverse shiny version of the same card. 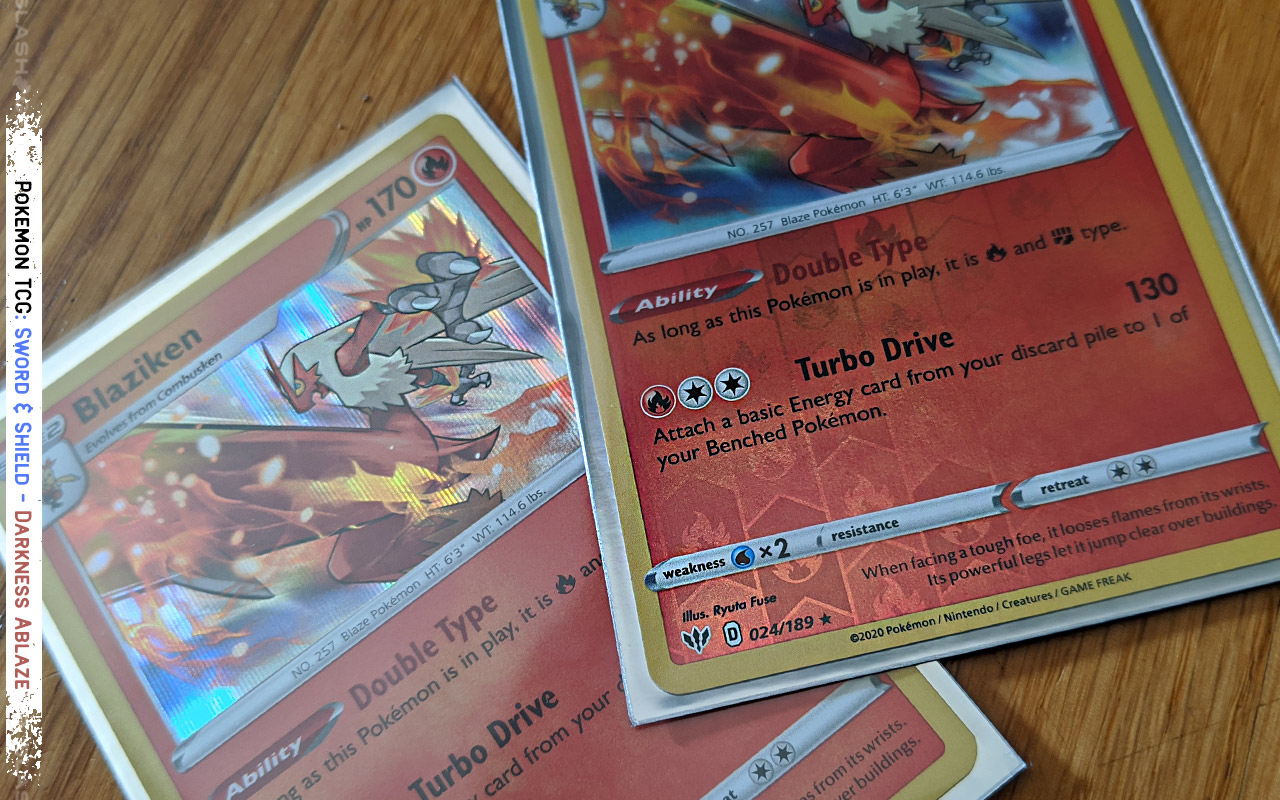 Like most modern Pokemon TCG sets, you have the opportunity to find more than one rare card per pack. Each pack has at least one shiny holographic card – that one card can be common, uncommon, or rare. Each pack is arranged with common cards first, then the shiny card, the rare (or better) card, then three uncommons and an energy card. At the bottom of the stack in any pack is a QR code card you can use to get a pack in the Pokemon TCG digital game. 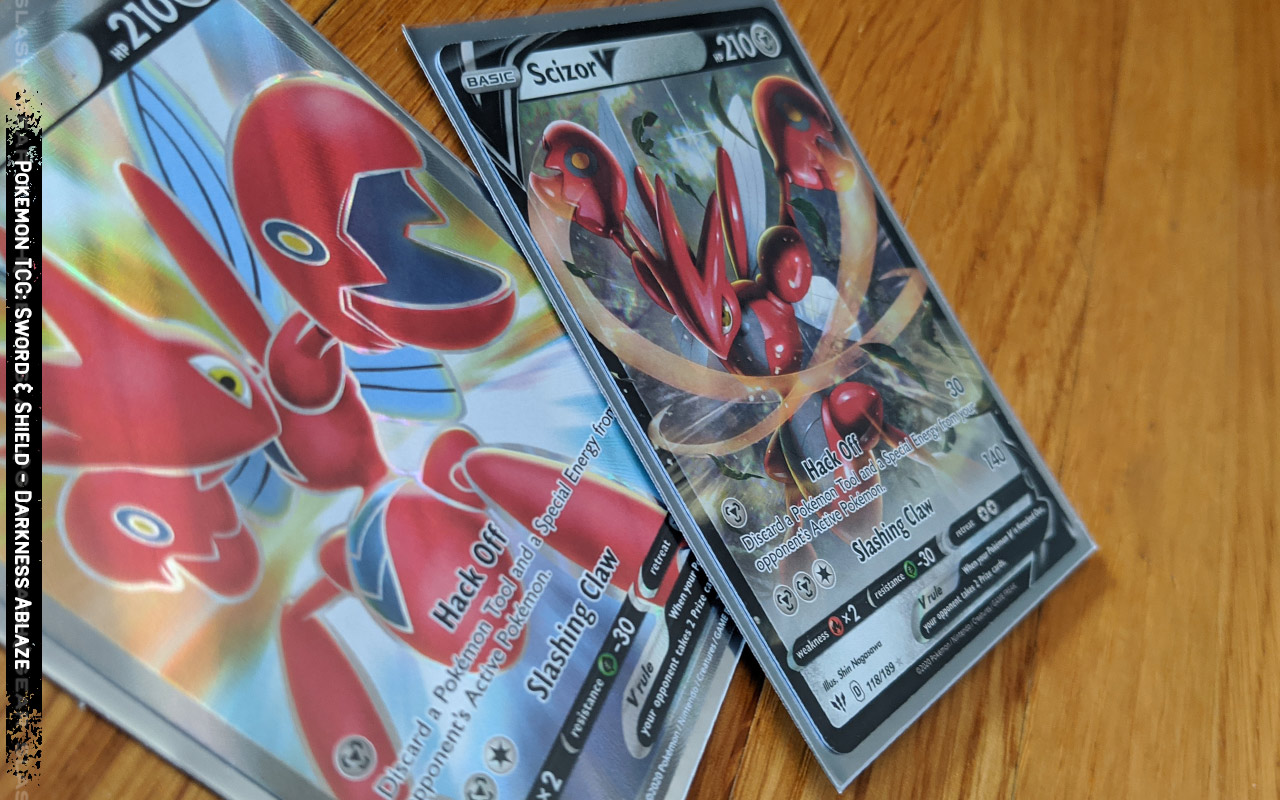 The rare card in each pack can have one of several sorts of the same card, too. The “reverse holo” can only appear in the foil spot in the pack, while the most radical looking cards generally appear in the rare spot. Above you’ll see two versions of Scizor. One is the standard “V” version, while the other is the rainbow foil version.

Both cards have the same powers in the game. Just like the two Blaziken cards shown above, these two Scizor work the same in the game. Each has a different application of foil and color. The standard V works with a flat, no-pattern layer of foil, with precision-cut sections of the Pokemon artwork cut to sit above the foil. That top layer has its own layer of gloss, and the entire production is just lovely. 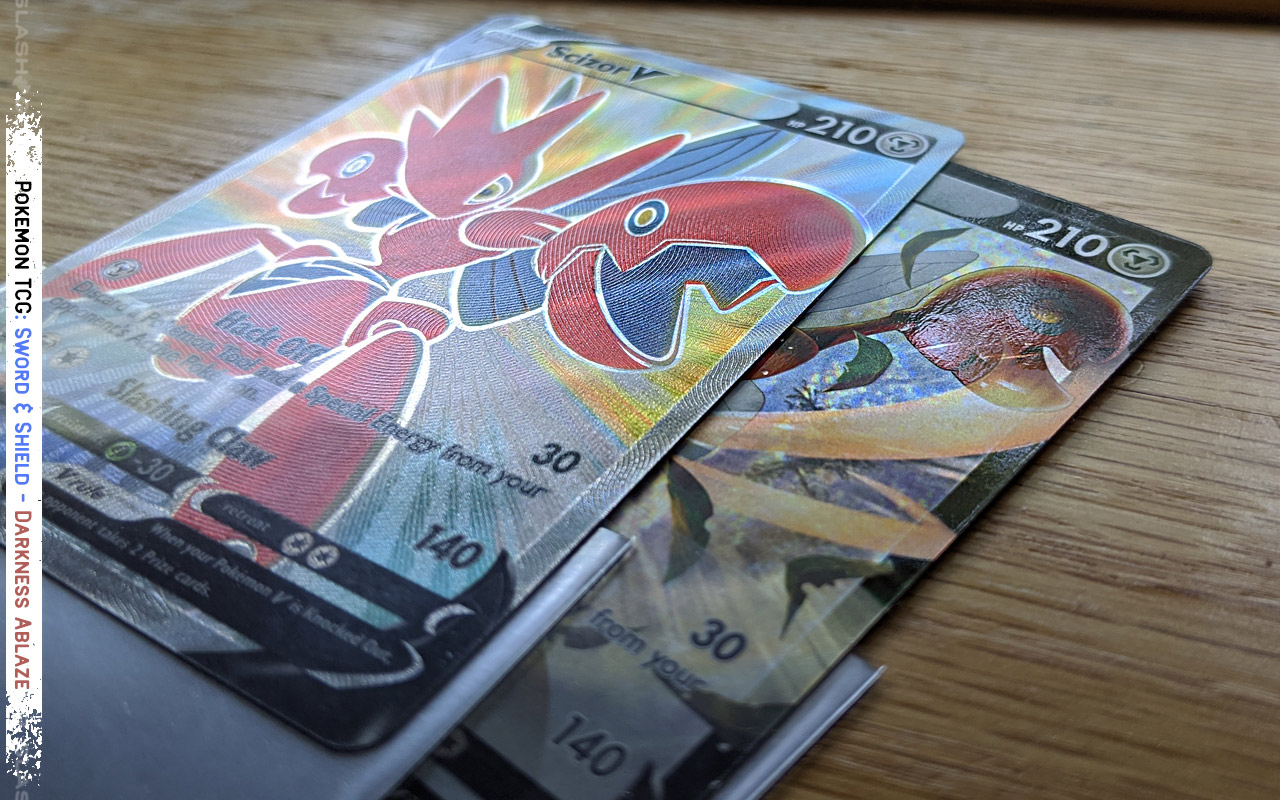 The Rainbow V version of the Scizor card has a completely different illustration, and a far more flat application of color. This card, like most Rainbow versions of Pokemon in the card game, has a blast of color behind it, and silver borders, as well as a textured top layer. 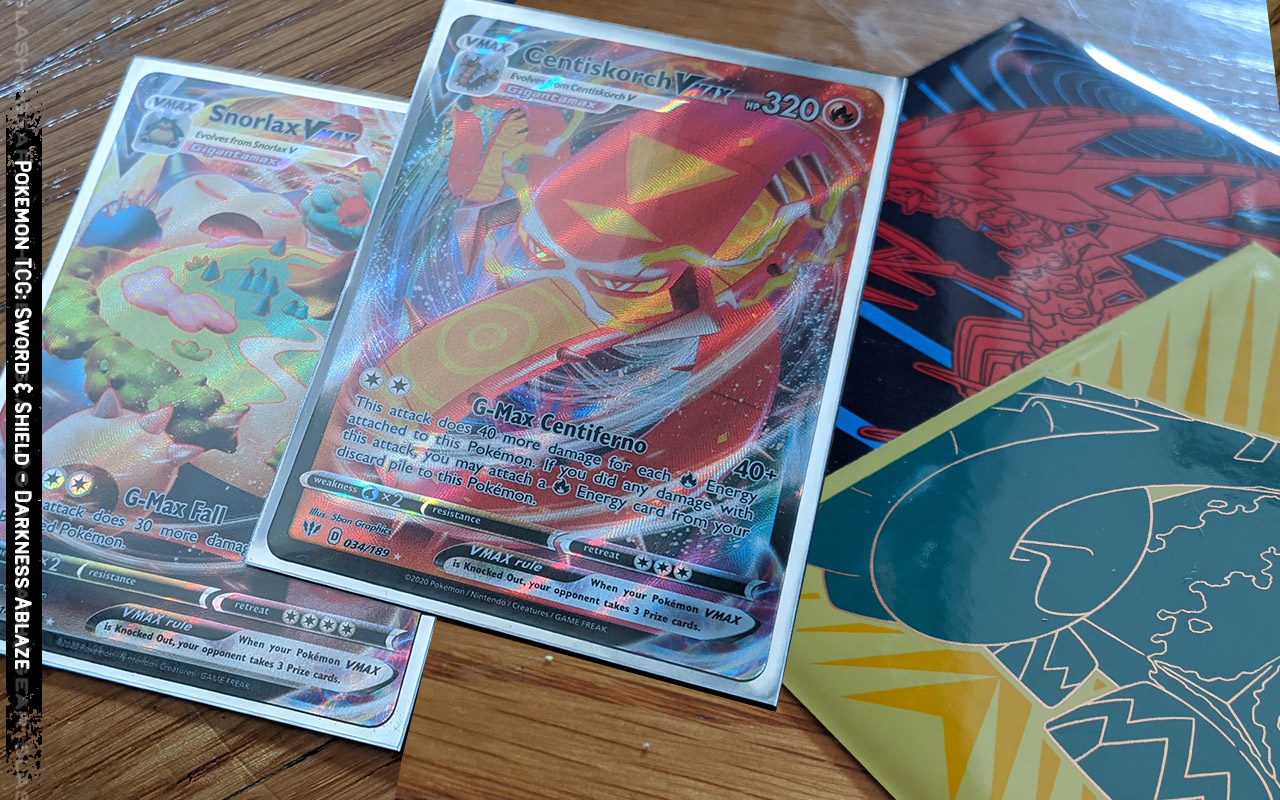 Above you’ll see a couple of VMAX cards – one comes from this newest set, the other (Snorlax) comes from the original Sword & Shield set. They’ve both got the same textured top layer and monstrous application of full-card artwork. 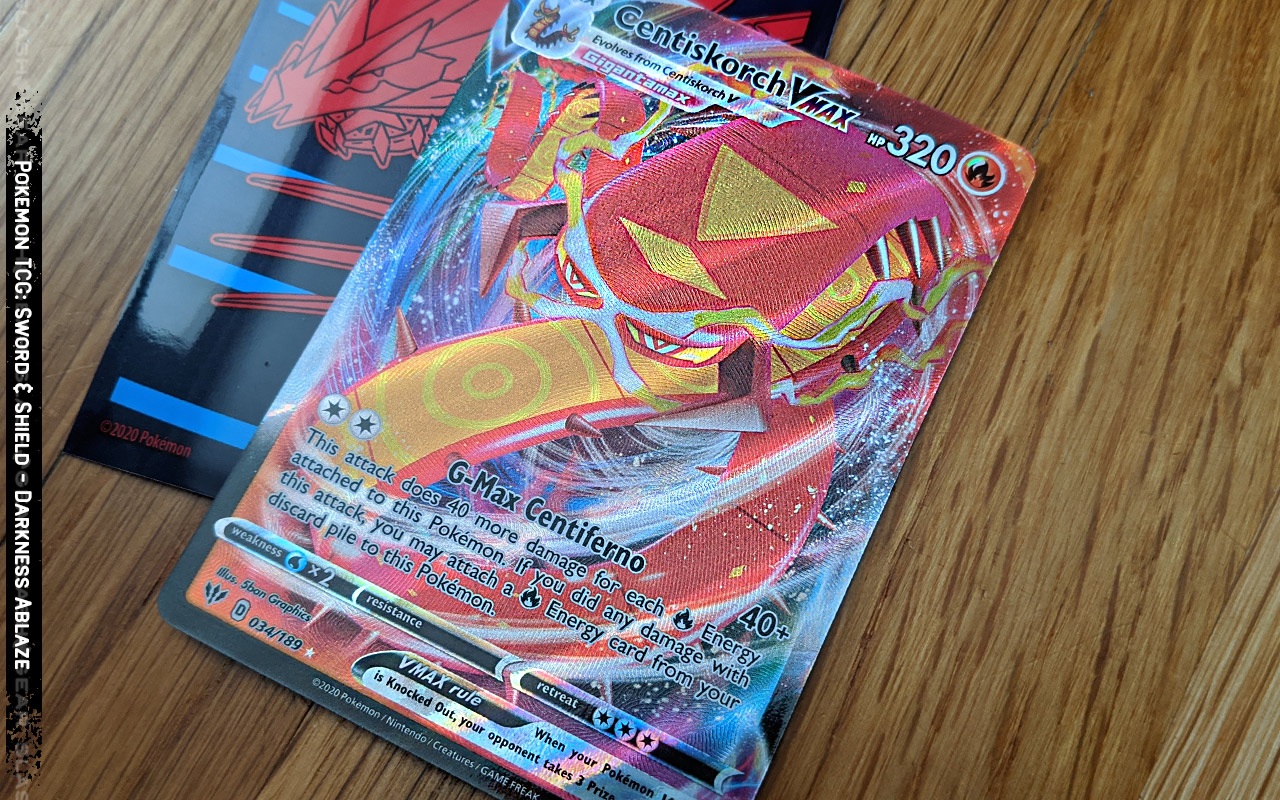 Below you’ll see a Secret Rare version of a Big Parasol. “Secret Rare” cards are cards not considered part of the base set of 189. The secret cards for this set are are as follows: Butterfree VMAX, Centiskorch VMAX, Eternatus VMAX, Scizor VMAX, Salamence VMAX, Pokemon Breeder’s Nurturing, Rose, Rillaboom*, Coalossal*, Big Parasol (as shown here), Turbo Patch, and Capture Energy. Some of these are rainbow foils, some are full art, all are a joy to find in a pack. 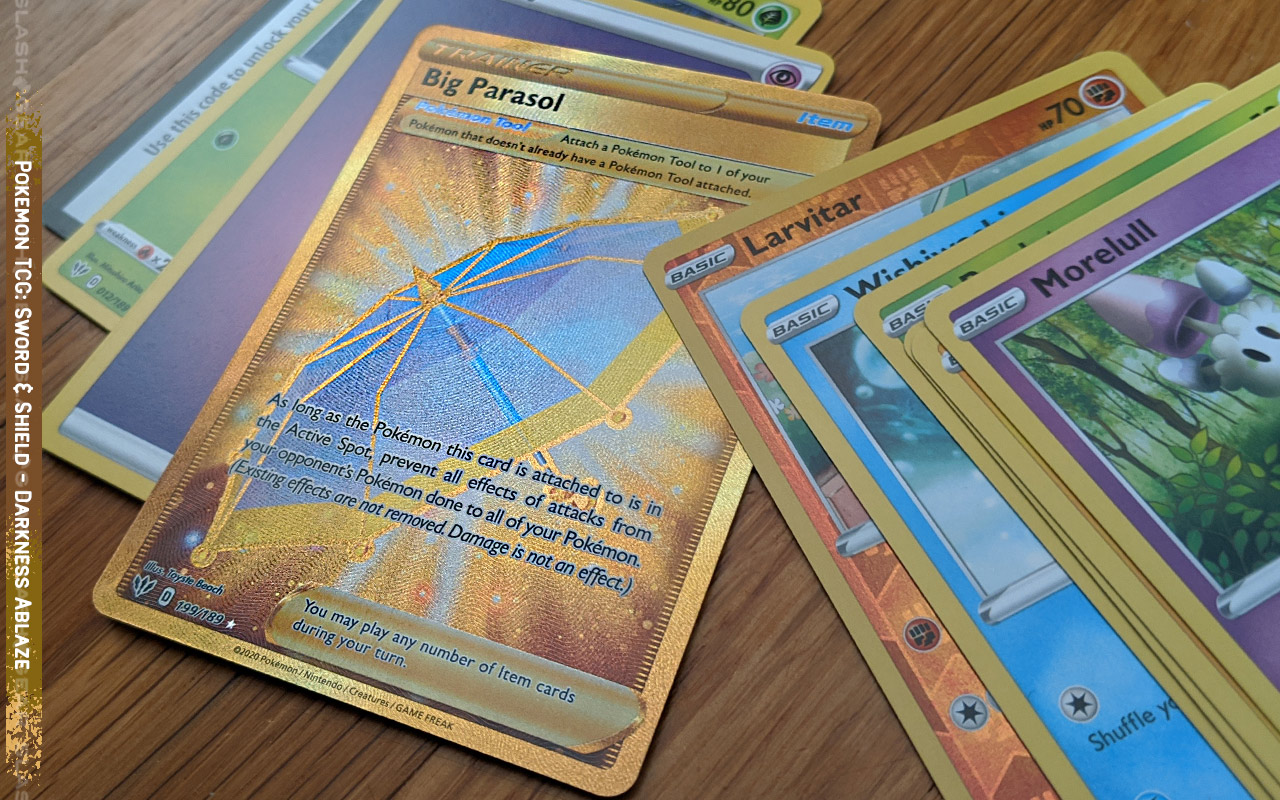 In addition to a whole bunch of packs, we got our hands on the Pokemon Sword & Shield Darkness Ablaze Elite Trainer Box. This box will cost you around $40 (or less, more than likely), and it includes a whole bunch of accessories as well as a few packs. You’ll get 8 standard packs of cards (just like you’d get in a booster box), 65 card sleeves (the Eternatus sleeve you see above), 45 energy cards, 6 damage-counter dice, 2 acrylic condition markers, a code card for the digital game, 1 competition-legal coin-flip die, and a Pokemon TCG rulebook. 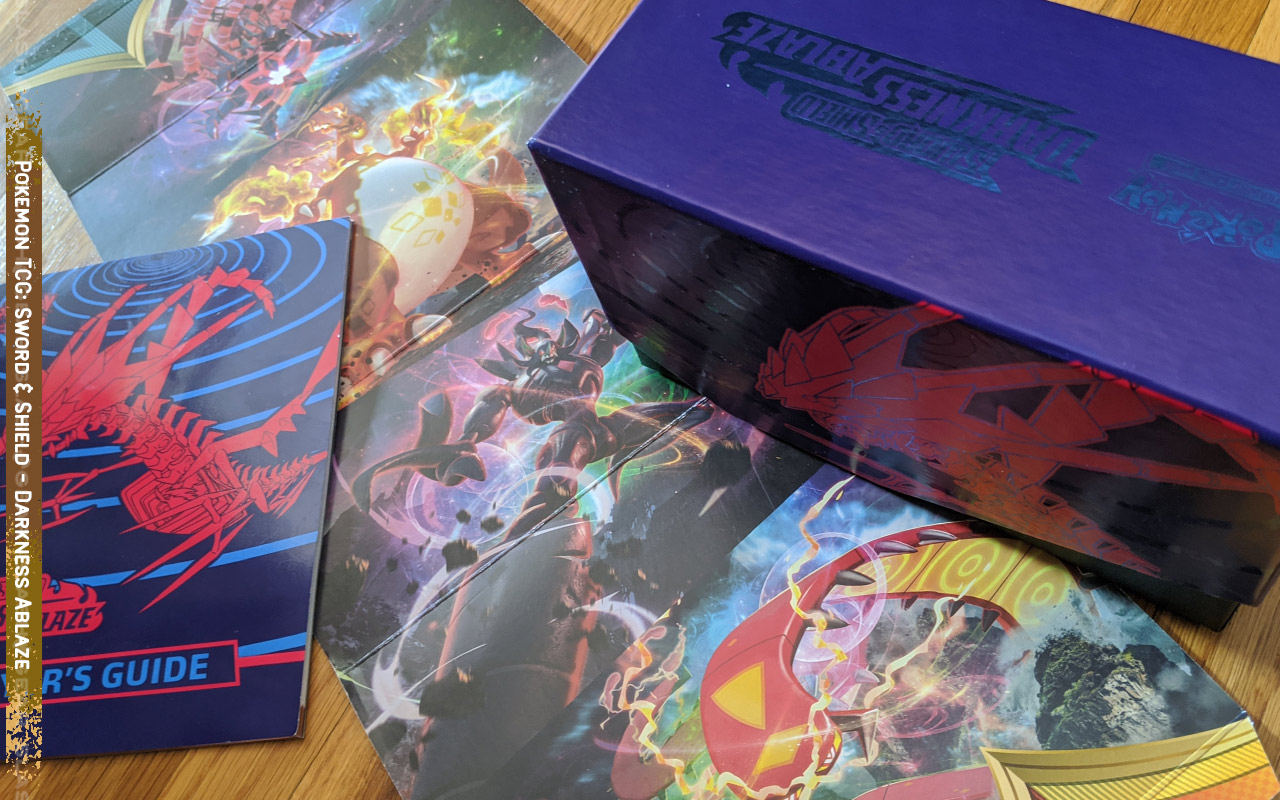 The second-best best part of this package is the box itself – because it’s a very capable box (complete with 4 dividers for your many, many cards). The best part of the entire package is the player’s guide to the Sword & Shield – Darkness Ablaze expansion. The guide has a full color printed list of every card in the set, with full art for every card – that’s just HELPFUL. 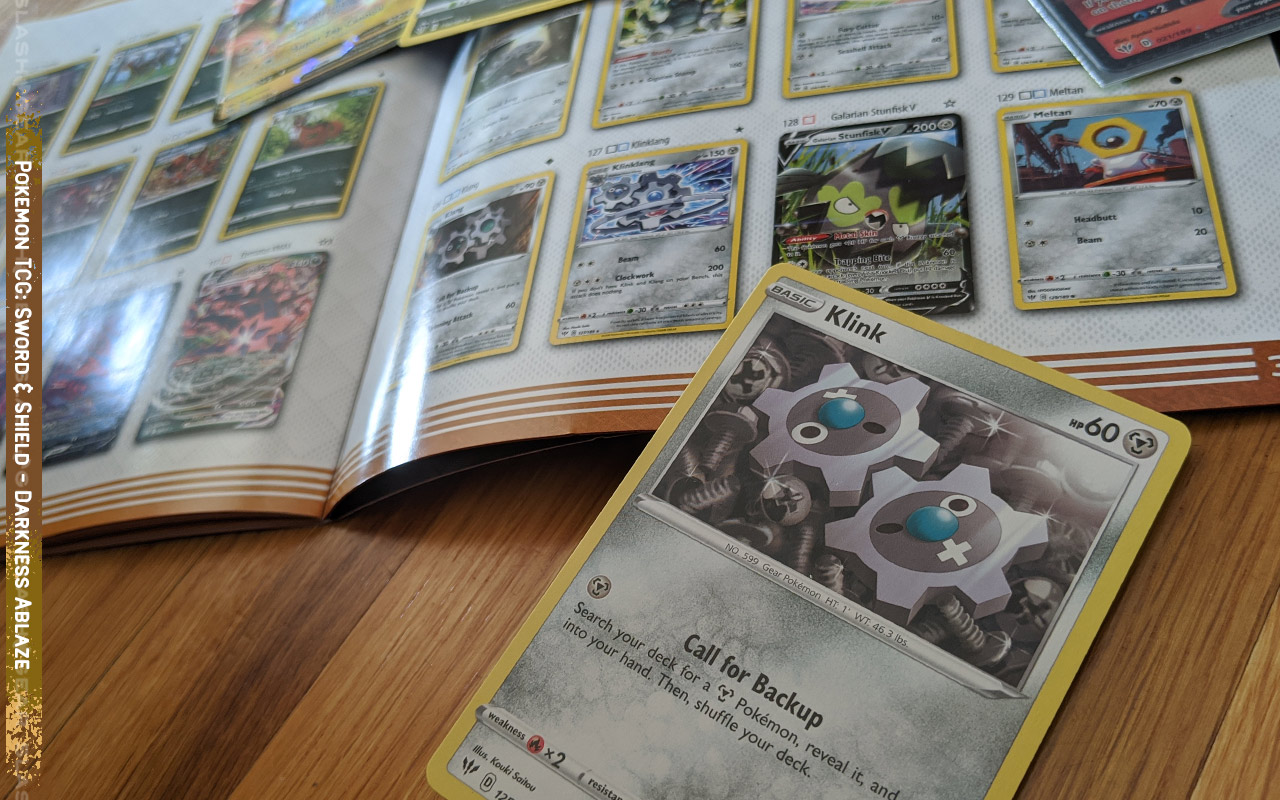 Take a peek at a few more Pokemon packs we’ve opened and analyzed in the last several weeks and months as well. There’s a Pokemon Sword & Shield unboxing (up close with foil) from the launch of this most recent era. There’s also a Pokemon Sword & Shield REBEL CLASH Elite Trainer Box unboxing if you’d like to dive right in – that’s where the yellow protective sleeves come from, not unlike the Elite Trainer Box we’ve got here today – always neat!

Topics GamesMobile gamingNintendoPokemonunboxingWizards of the Coast
Must Read Bits & Bytes