In the weeks before the PlayStation 4 is released to the public, a rather non-traditional teardown of the machine has commenced. What you’re seeing here is a collaboration between Sony‘s engineering director Yasuhiro Ootori and Wired, taking apart the PlayStation 4 piece by piece inside Sony headquarters. This tour is not the same sort of teardown as you’ll see at the hands of iFixit – instead it’s more of a cut-up readied for the gamers of the world.

This dismantling of the PlayStation 4 shows several things. First, it shows the insides of the gaming console – something no-one outside the engineering sect of Sony has really been able to see before this week. The second thing it shows is the relative ease with which the machine will be able to be taken apart. 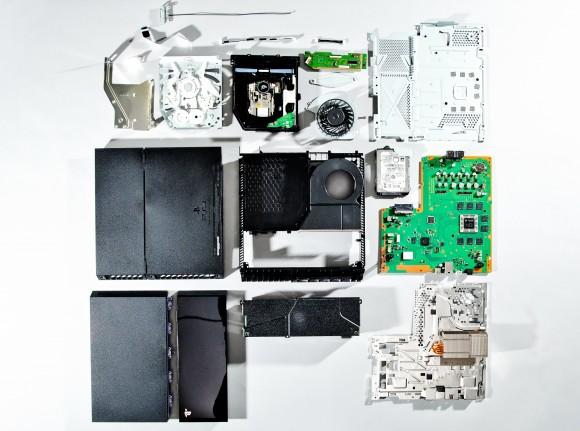 The actual dismantling took place in the middle of October, while Sony seems to have given plenty of time to the press to adequately prepare the video and images of the device to make it look as fine as possible. The actual dismantling of the machine is said to take approximately a half-hour – though it could be done a whole lot faster by someone who doesn’t care so much about being pristine.

Inside you’ll find a built-in power adapter (meaning you wont need a beast of a cord to power the machine) Bluetooth and Wi-fi antenna, and an optical drive with tha ability to work with DVD and Blu-ray disks. If you didn’t know by now: this machine does not work with PlayStation 3 games – it’s all about the future from here on out.

Inside you’ll find pieces from SCEI, Mitsubishi, and HGST (for storage), and a stamp of approval from the manufacturing plant that constructed the whole package: Foxconn. Have a peek at a couple of photos (again, from Wired) of the insides of this beast in this gallery and stick around – we’ll be getting in deep with the PlayStation 4 ourselves sooner than later!