Plantronics knows a thing or two about Bluetooth headsets, being one of the stalwarts of the industry, but the new Voyager Edge still has something unusual to it. Fitting in-between Plantronics’ Legend and Discovery lines of earpieces, the Voyager Edge claims to pair the performance of the former with the style of the latter, in a headset suitable for both home and office. There’s some strong competition from Jawbone’s Era, however; read on to find out which deserves a spot on your ear.

The Voyager Legend has a well-deserved reputation for excellent call quality, but with its chunky behind-the-ear battery block and extended boom, it’s hardly discrete. On the other hand, Plantronics managed to make a far more discrete headset in the Discovery 975, but it misses out on the rock-solid audio.

The company’s goal is to address both those issues with a single headset, the Voyager Edge. Like the Discovery 975 it’s a slim boom and a discrete, diamond-shaped block; however, inside is effectively the same hardware as the Legend. 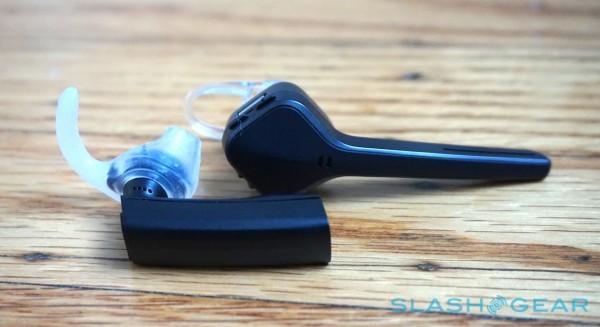 It’s smaller than the Legend, too, though still not as dramatically tiny as the Jawbone Era. Still, Plantronics has put the boom length to good use, making sure there’s not only a set of buttons for volume and call answer controls, but a dedicated trigger for the Voice Command system too. In contrast, the Era has a single, multi-function button and a power switch.

There’s a detachable plastic ear-loop in the box, if you’re a traditionalist, but I’ve a feeling most will stick with the standard selection of rubber ear-tips. Each has a protruding fin which, with a little adjustment, can be coaxed into lodging into your outer ear and keeping the headset in place. 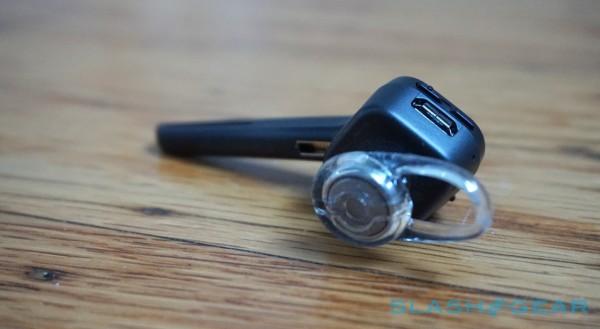 That’s the theory, anyway. In practice, at times I struggled to get the Voyager Edge feeling as secure as I’d have liked. To be fair, it only became dislodged after a particularly vigorous head shake, but it never felt quite as secure as the deeper ear-tip Jawbone uses on the Era.

Even if you do drop it, however, there’s P2i nano-coating to make the headset moisture-resistant (though not waterproof, so still best to avoid puddles), and Plantronics’ companion app has a “find my headset” option which helps you hunt it down.

Not for nothing does Plantronics have one of the best reputations for Bluetooth handsfree quality, and the Voyager Edge happily comes close to the legacy established by its beefier Legend sibling. Pairing is simple on both iOS and Android, though if the latter has NFC then it’s as straightforward as touching headset to phone. 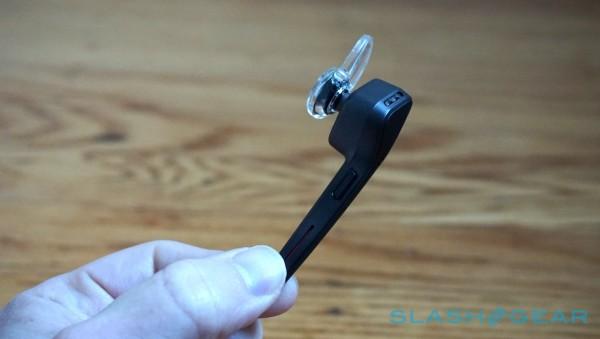 From that point on, while there are physical controls you can do most of the key features more easily. Picking up the headset when the phone is ringing and putting it into your ear will answer the call; if you’re already wearing it, then saying “answer” will do just that. “Ignore” rejects the call instead, while saying “call back” redials the last number.

I tested it side by side with the Era, and found the Edge to be the better balanced of the two when it comes to both incoming and outgoing audio. Jawbone’s headset goes louder in the earpiece and A2DP music (albeit streamed in mono to one ear) sounds fuller in the low-end than the Plantronics, but callers told me they preferred the audio of the latter. The Era needs its little nub to be touching your cheek to get the best noise-cancellation results, whereas the Edge relies solely on its triple microphone array. 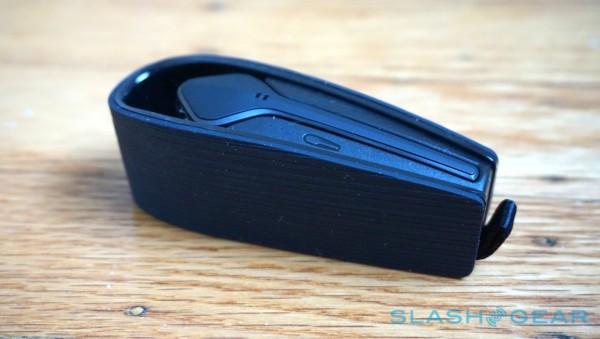 As for battery life, Plantronics rates the Voyager Edge as good for up to 6hrs of talk time from a full charge. In a mixture of tests with an iPhone 5s and Samsung Galaxy S5, I saw in the region of 5 to 5.5 hours.

However, Plantronics also includes a battery case, into which the Edge clips. It’s a neatly designed thing, with two separate three-LED battery gages – one for the case, the other for the headset – though it’s bulkier than the equivalent Jawbone includes with the Era.

That does mean the Edge’s case protects its earpiece (the Era’s is left sticking out) and it fits a bigger battery, too, with Plantronics claiming up to ten hours more talk time. Both case and headset have a microUSB port for recharging. 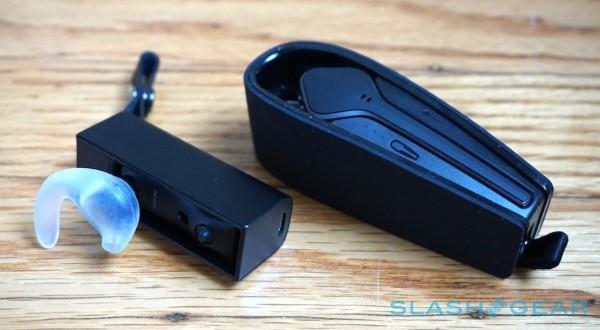 It’s generally difficult to find a Bluetooth headset that delivers solid audio quality without leaving you looking like you’ve just come off-shift from a call center. Jawbone’s Era has since its launch been our pick of the handsfree kits, with its diminutive design and solid audio performance. The Voyager Legend sounded better, undoubtedly, but it fell far short in aesthetics.

With the Voyager Edge, Plantronics changes that. By blending the style of the Discovery 975 and the performance of the Legend, the company has come up with an excellent compromise that, while not as discrete as the Era manages to be, makes up for it with the reliability of its sound. 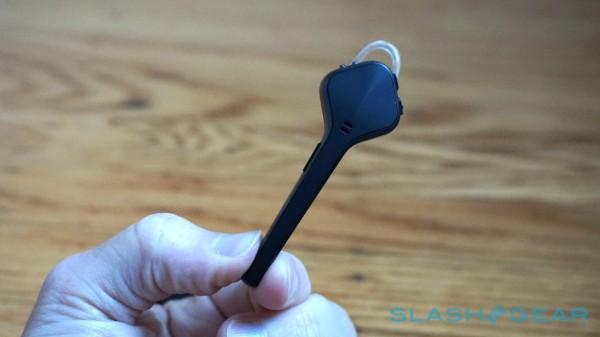 You’ll pay for that, mind: the Edge, at $129.99, carries a $30 premium over the Legend (the street price of which is closer to $70) and matches the Era, though Jawbone also offers its headset under the $100 mark if you’re willing to give up the charging case. Plantronics will eventually sell the Edge headset-only, but not at launch.

If you’re solely using your Bluetooth headset in the office or in the car, saving money and opting for the Legend is the cost-conscious choice. For everyday use, however, the Voyager Edge’s combination of looks and performance do elevate it. 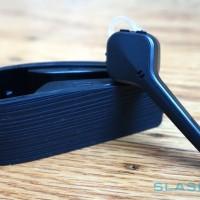 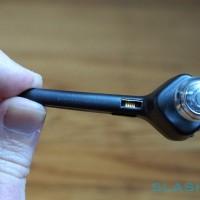 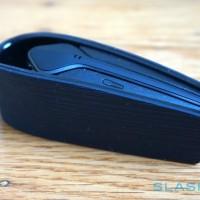 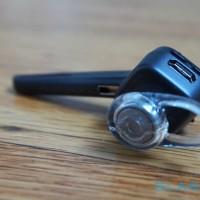 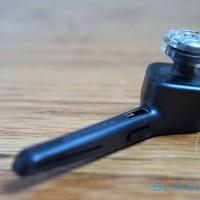 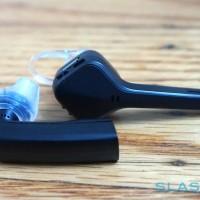 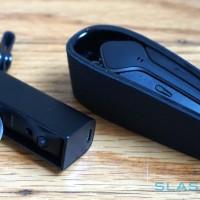 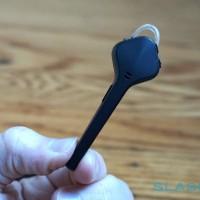 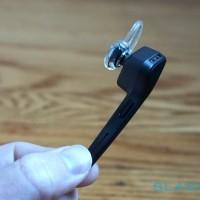 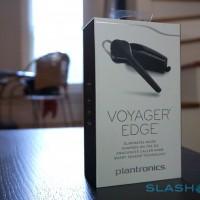