This morning I was about to get up-in-arms about the lack of a headphone jack on the new Google Pixel Slate. Then I saw what they’d done instead. Lots of devices that’ve abandoned the headphone jack were released over the past couple of years with no reasonable wired alternative. Google, instead of doing what everyone else did, came to the table with USB-C x2.

The Pixel Slate comes in several iterations, with no headphone jack included on any single one of them. All versions include two USB-Cs “for charging, 4K display output, and quicker data transfer.” They also include an “accessory connector for Pixel Slate Keyboard.” The device can be charged by one USB-C with the cord included in the box at the same time as it outputs audio from its other USB-C.

With this solution, Google still demands that users either move to Bluetooth, USB-C, or a dongle for headphone or earbud-centric audio. If you’re all about the highest-quality audio, you’ll want to pick up a USB-C adapter – but you’ll want to make sure it’s compatible with this device specifically before you do.

When Google released the Google Pixel 2 with no headphone jack, they included a USB-C dongle to assist with new users’ transitions into the non-headphone-jack-future. Now we’re not quite so lucky. Now, with the Google Pixel Slate, the box includes the slate, a power adapter and cable, USB-C Charge Cable, and a quick start guide. 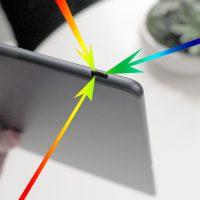 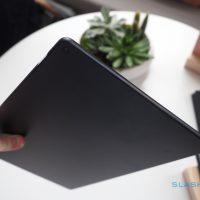 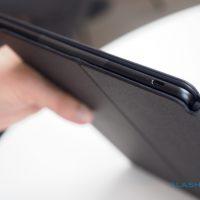 Google did not present any solutions for personal audio on this device for when a user is out in a public space. Instead they only mentioned that this tablet has dual front-firing speakers “for better surround sound.” I’ll thank you very much, Google, for reconsidering including either a dongle or the proper jack itself for the final release – unless of course you’re suggesting that USB-C audio is, indeed, the only true way forward from here.