The folks at Parrot just released their new Parrot ANAFI FPV All-In-One Pack, and we’ve been giving it the once-over for the past couple of weeks. The Parrot ANAFI FPV All-In-One Pack is basically the ANAFI drone with FPV accessories and a handy all-in-one backpack. Parrot’s aim with this pack is to provide an easy-to-use yet professional drone experience for every sort of user – newbies and veterans alike.

We had a chat with Parrot Chief Sales and Marketing Officer Chris Roberts about the release of this newest drone experience. “[ANAFI FPV] is drone you can put into anybody’s hands,” said Roberts. “It has everything you need inside one kit. You have the drone, you have the fast smart charge USB-C battery, the microSD card for memory, and the control. You have a very intuitively designed backpack as well, so it’s ideal for quite a wide audience.” 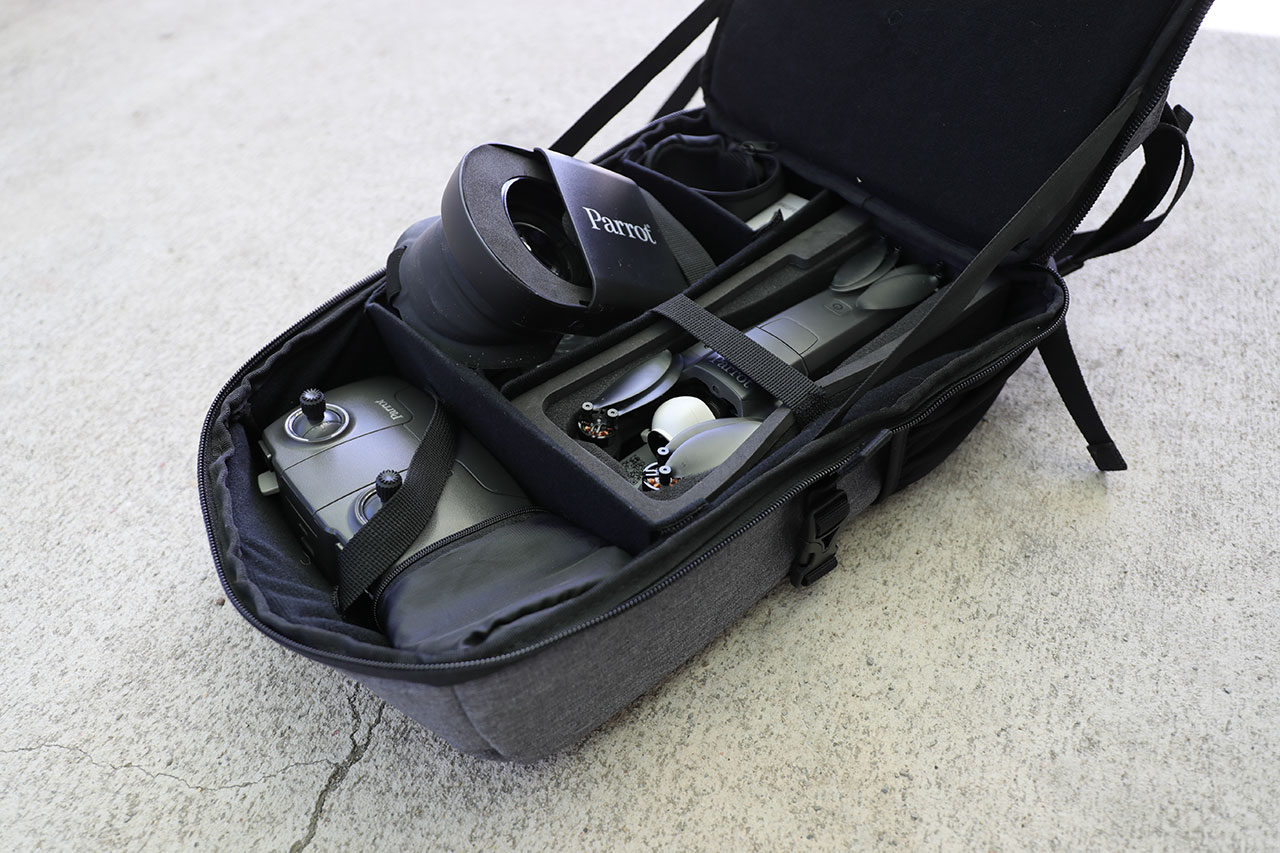 One pack, many aims

The Parrot ANAFI FPV All-In-One Pack includes a Parrot ANAFI drone, a backpack, and all the most essential accessories for FPV (first person view) flight with a smartphone. You need to supply the smartphone, of course – either an Android or an iOS device with the requisite OS level, and there’s an app (Parrot FreeFlight 6) with the control interface you’ll need. 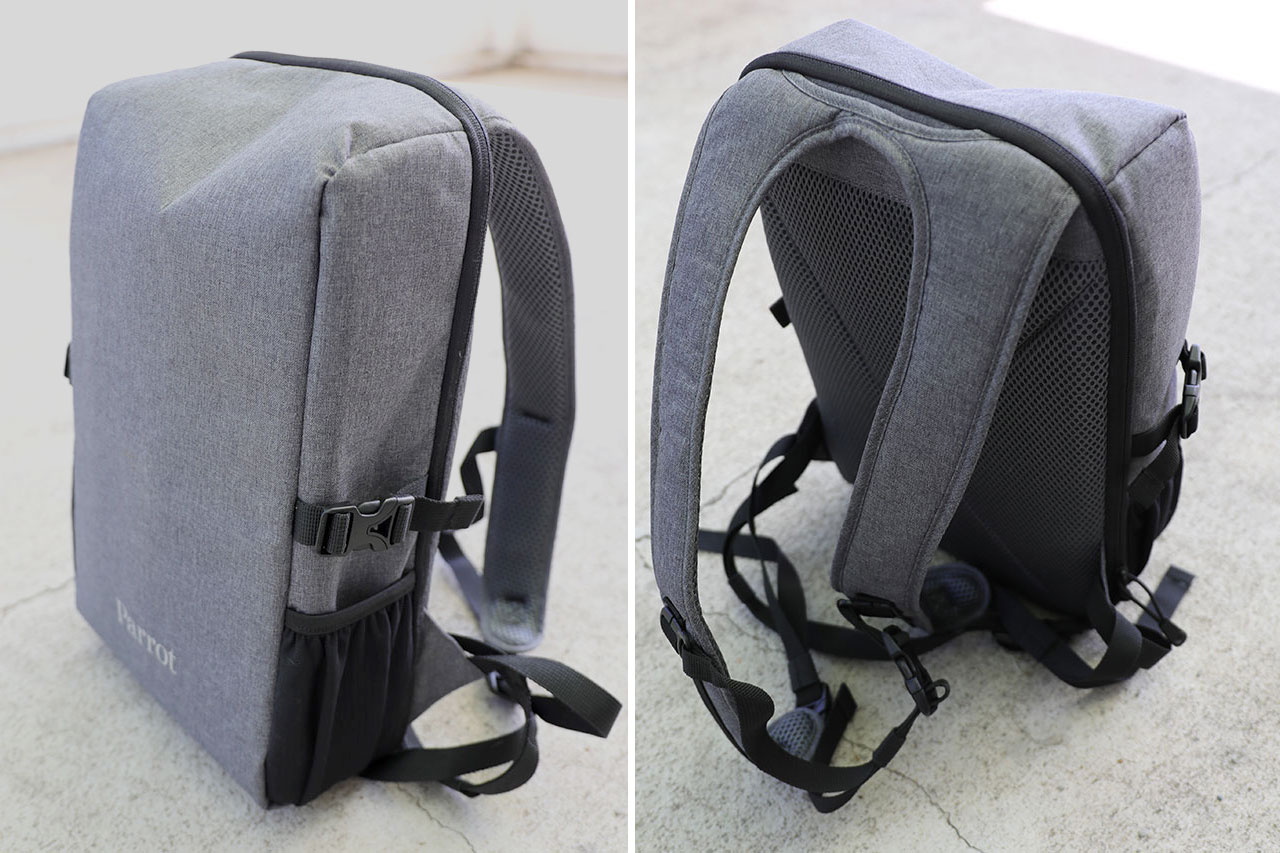 The backpack is compact and clearly constructed specifically with these parts in mind. Parrot suggests that this drone allows many different sorts of intents to take flight – you can be a professional photographer, a mountain biker aiming to create a video from overhead, or a hobby drone-piloting newbie.

The backpack really makes the product. Parrot could’ve easily offered each component individually. But with a single pack with bits of hardware that are clearly made to work as a team, the total package becomes something greater than the sum of its parts. 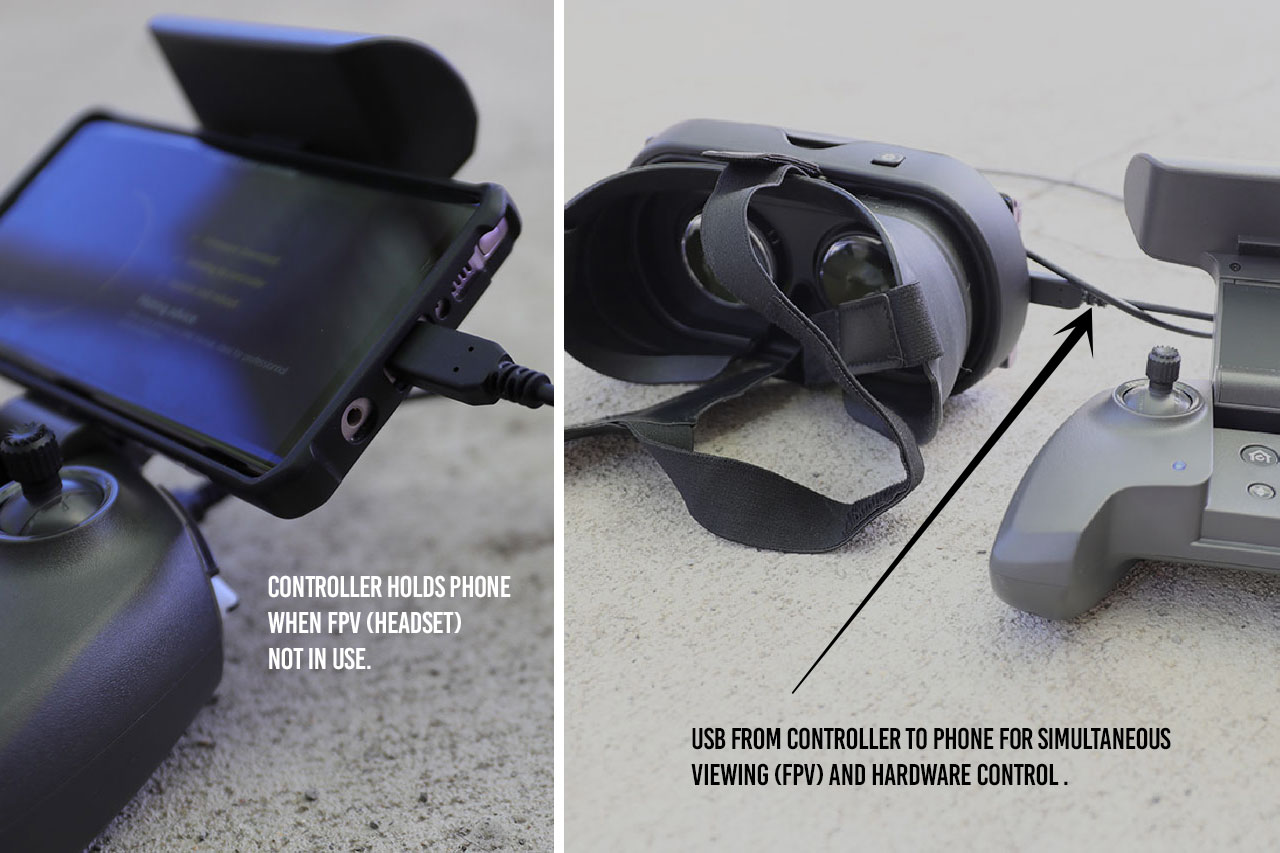 In the bag is a charging cord – which you’ll want in order to connect to the controller for FPV with the headset (aka Cockpitglasses 3, complete with two new hardware buttons). You’ll get the headset, and the controller. The controller is the Skycontroller 3, a new version of the hardware that Parrot suggests is 30% smaller than its predecessor.

You’ll also find 8x replacement blades for the 8x blades that come pre-installed on the drone. There’s also a microSD card for data storage on the drone itself, as well as a full-sized SD-card converter, inside which you’ll dock the microSD in order to be read by more card readers than would be possible with the microSD card alone. 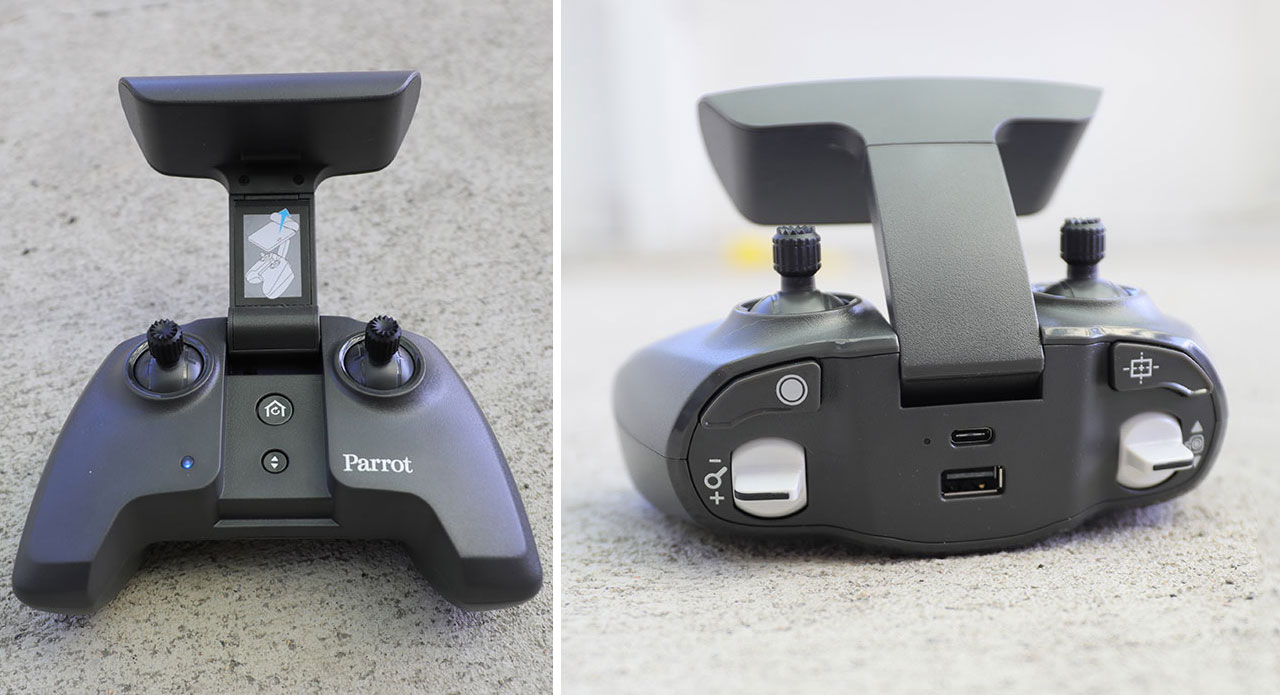 What’s new in the ANAFI FPV

The ANAFI FPV version of the drone looks a whole lot like the non-FPV version of the ANAFI, but they ARE different. This newest version has the same camera, but hardware updates in several other areas. Earlier this year, Parrot iterated upon the ANAFI with the ANAFI Thermal, swapping the original drone’s camera for a FLIR sensor and modifying the body of the drone in several key ways. 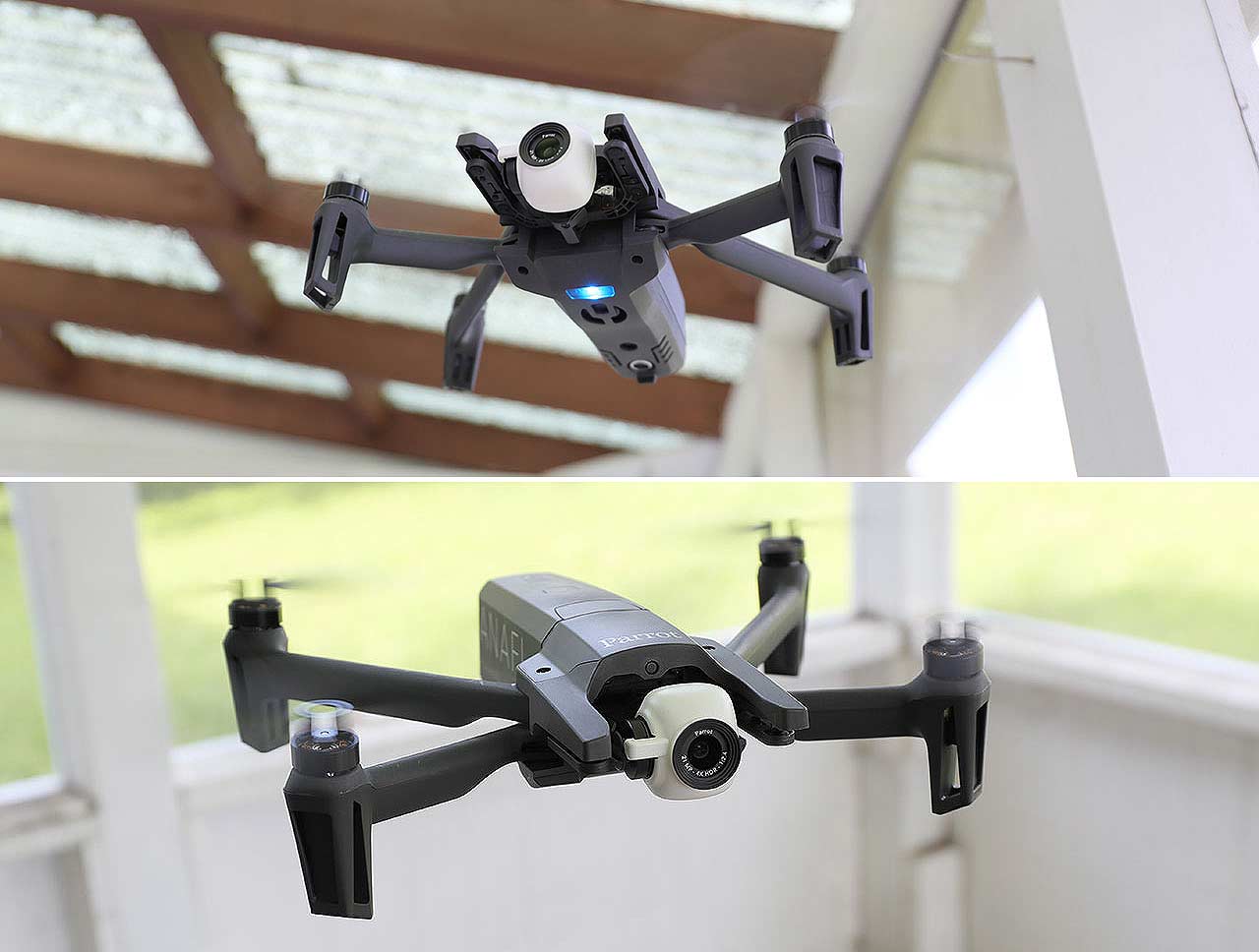 The hardware improvements made in the Thermal drone (aside from the camera) also appear in the FPV. But where the Thermal version’s starting price was $1,900, the ANAFI FPV package is far more affordable. Below you’ll find a list of updates made to this FPV drone over the original ANAFI and/or the Thermal iteration. 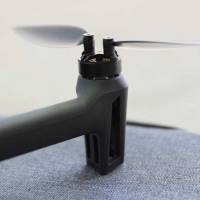 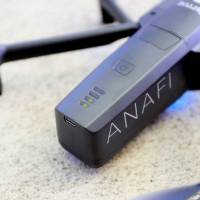 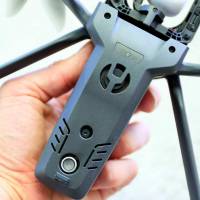 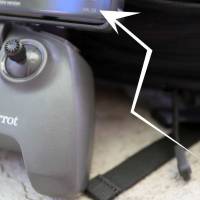 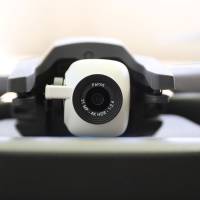 Once you’ve got the newest version of the app (as of this week, in September of 2019), Parrot FreeFlight 6, the number of steps from zero to flight is quite small. The user has only to make sure they’ve connected to the wireless signal of the drone with their phone’s wi-fi, selected their drone in the app, and they’re off. I did not need to look up any separate internet guide or consult any paperwork in order to get flying – creating a drone that can accomplish this, especially one that uses a smartphone as part of its essential system, is no small task.

The latest iteration of the app adds an FPV button right up front for easy access, allowing for split-screen action and simple remote control menu action. The FPV screen with the Parrot-made headset includes a couple of on-screen buttons that can be accessed mechanically with hardware buttons in the headset, but most everything works with the included Skycontroller 3 handset via joysticks.

I found flying the drone to be relatively straightforward – at least for the non-camera and non-special-feature bits. Once we get to navigating between photo/video modes, which button to press to get the drone to track what – things got a little more complicated. Just a little beyond novice.

Getting the drone into FPV flight mode, up and flying, wasn’t a hassle. Flying in FPV was an experience above and beyond any similar FPV flight with a drone I’ve run before. FPV is easy to begin, and feels better than any 3rd-party “use this app to split your screen” sort of rigging for drones I’ve used before – this feels like the professional version of that.

This is now the least expensive pathway we’ve tested for FPV drone flight with a UI and professional control. There may be cheaper ways to do this – but none so well executed for anywhere near this price point.

*There’s an in-app shop in the Parrot Freeflight 6 app that allows purchase of two extra features. One’s called Follow Me, the other is Flight Plan, each costs $0.99 apiece. At this price, not just including the features in with the original drone package seems… unnecessarily convoluted.

I’m not going to focus a whole lot here since this camera isn’t strictly new to this drone series – it’s been on the ANAFI before the FPV. It’s good. The ability to record in 4K, to use HDR image capture, to capture media with a built-in gimbal for top-notch smooth final products – this is really where the implementation of the camera in this drone really shines. 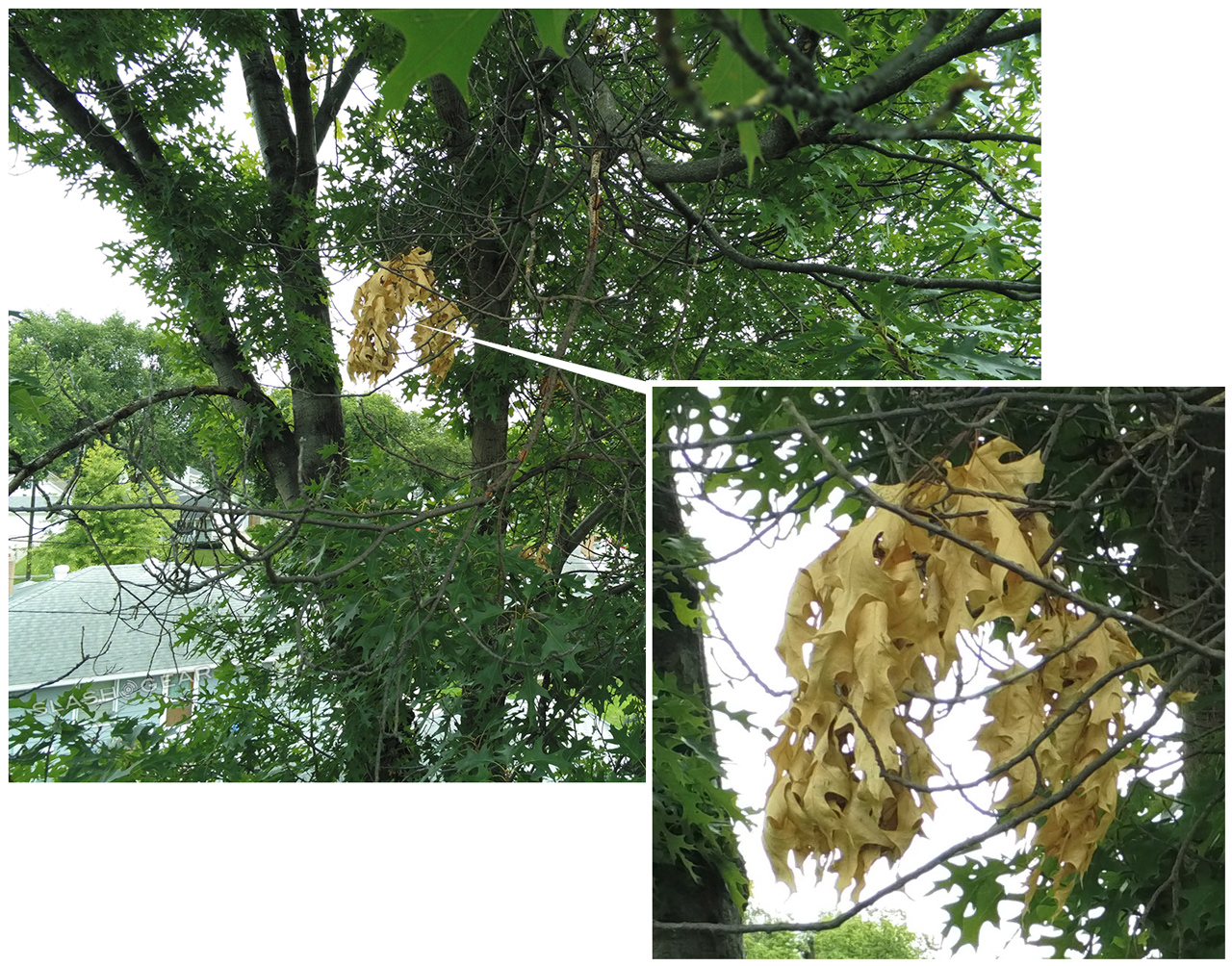 ABOVE: Details on a photo taken hovering amongst branches and leaves on an overcast day with relatively low wind. Cut out shows closer detail on same original photo. BELOW: Downward view of yard, taken on overcast day. 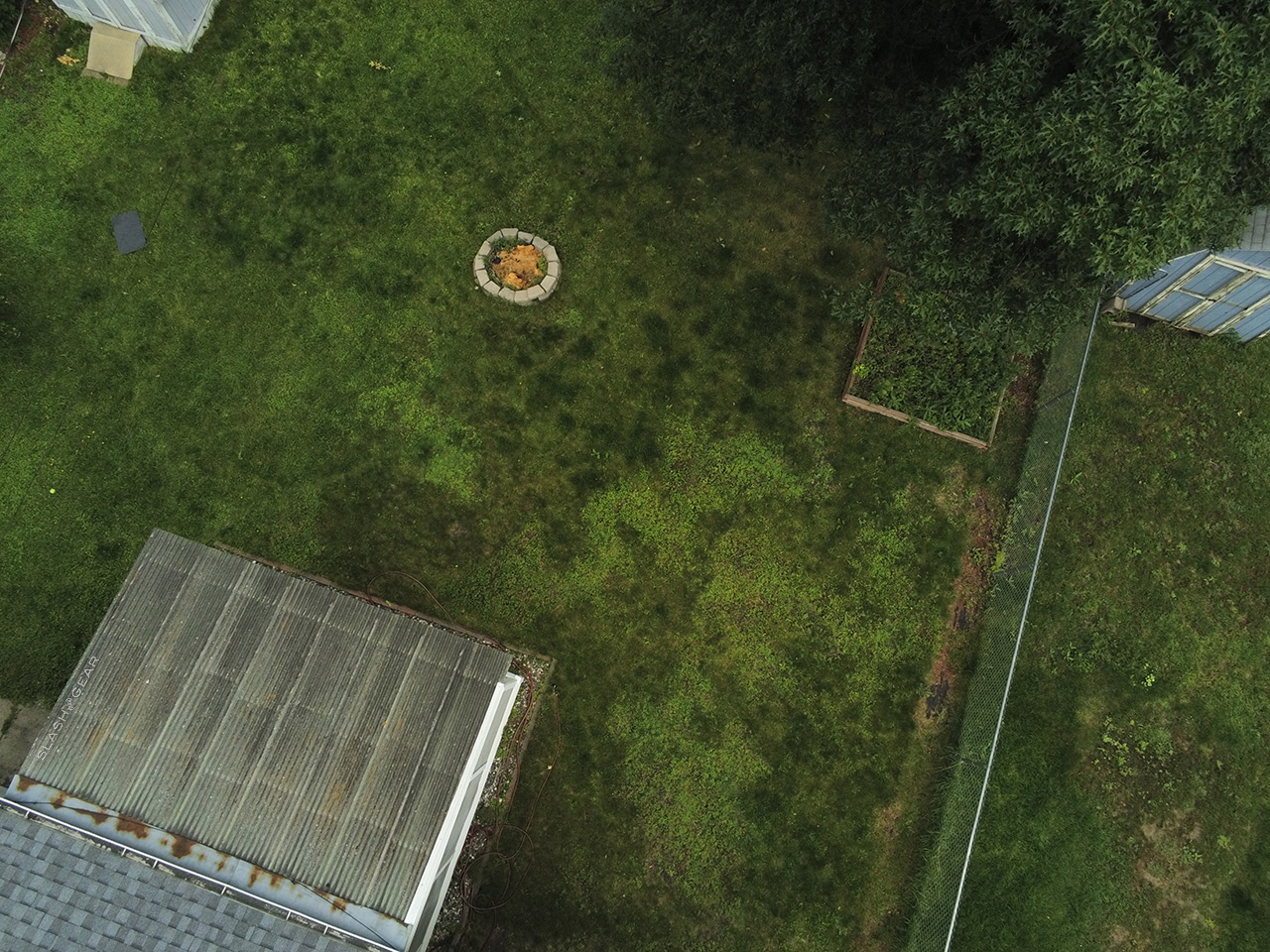 Because of the way this drone sets its camera out and away from any block, it’s able to tilt a full 180-degrees up and down. The drone has 3-axis hybrid stabilization – that’s 2-axis roll/tilt angles and EIS: 3-axis roll/pan/tilt angles. 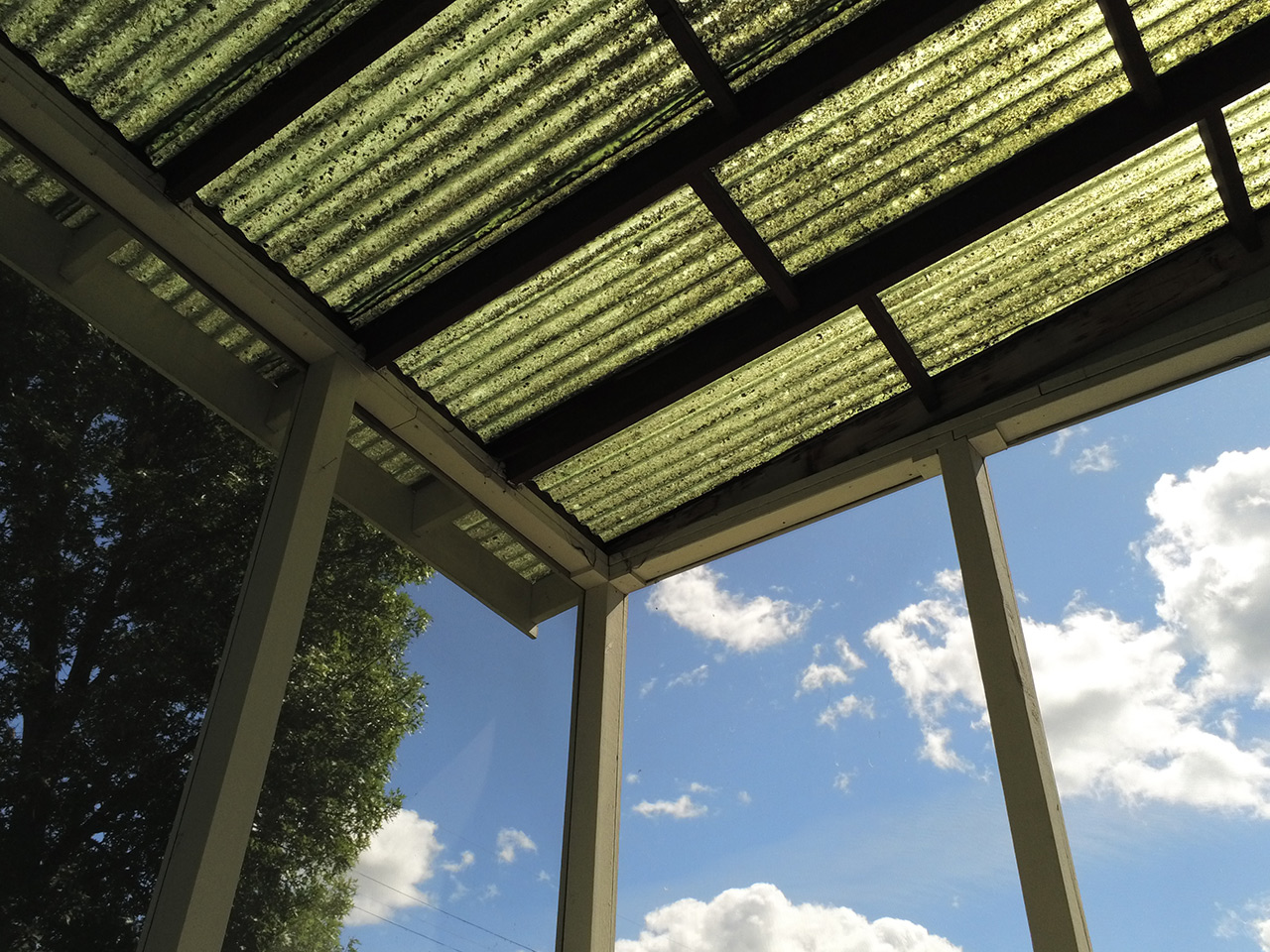 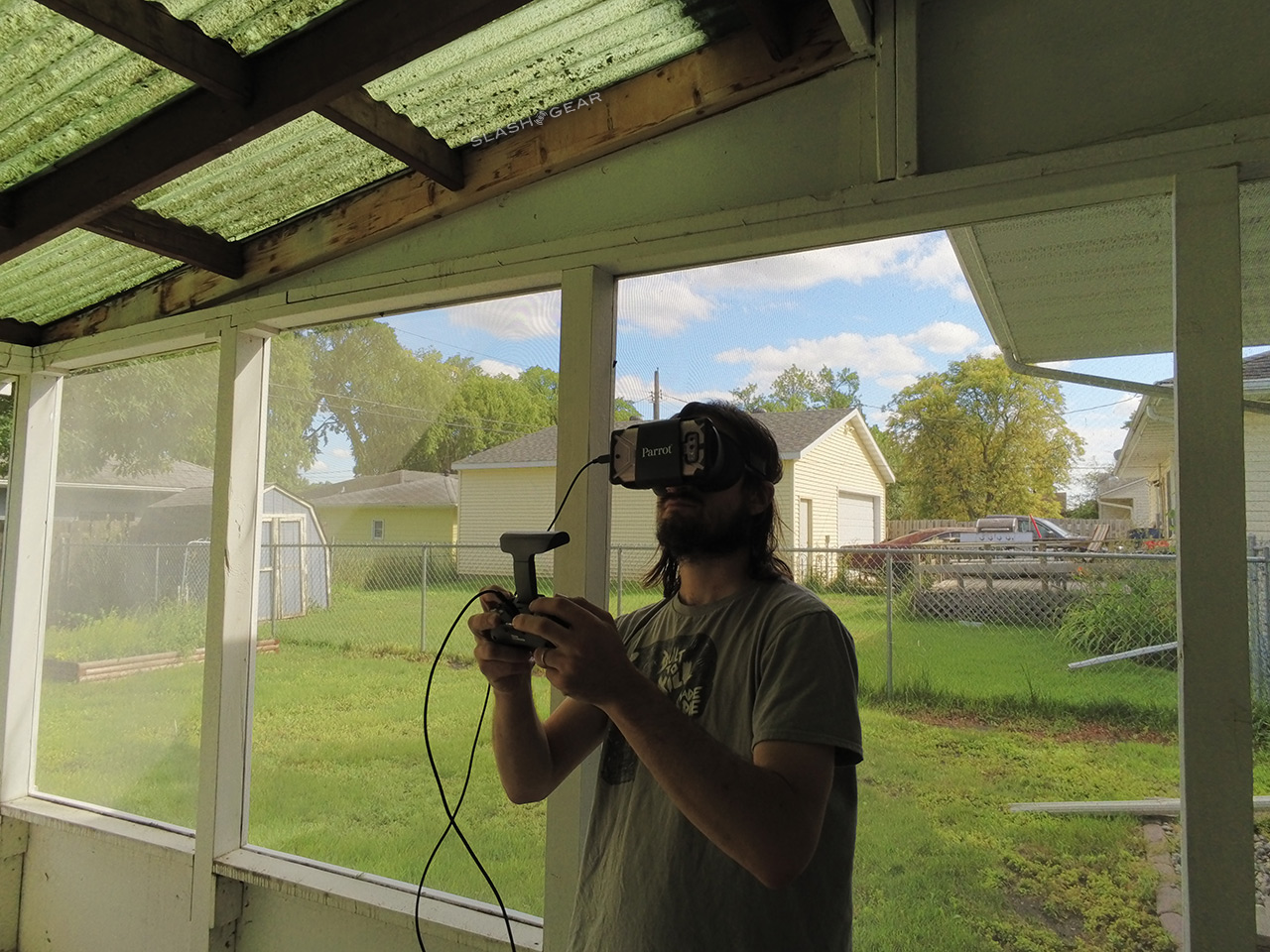 Next you’ll see a set of photos captured by the drone with its ability to bracket, snapping multiple photos in quick succession at different exposures. This 5-photo exposure bracketing series snapped at 1/961, 1/480, 1/240, 1/120, and 1/60. 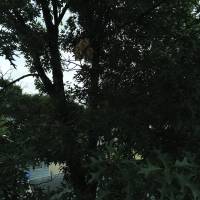 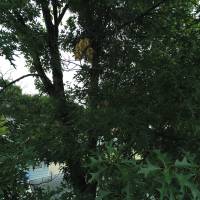 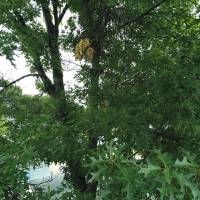 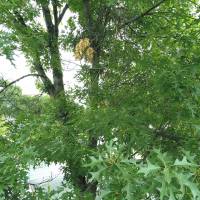 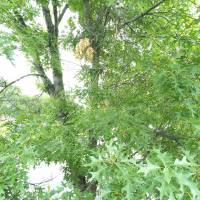 Next is a merged Photo that I’ve automatically processed using Photoshop’s HDR merge feature (Choose File > Automate > Merge To HDR Pro). Note here – and throughout the article – that there is some minor loss in quality due to the small size/fast load requirements of the internet. 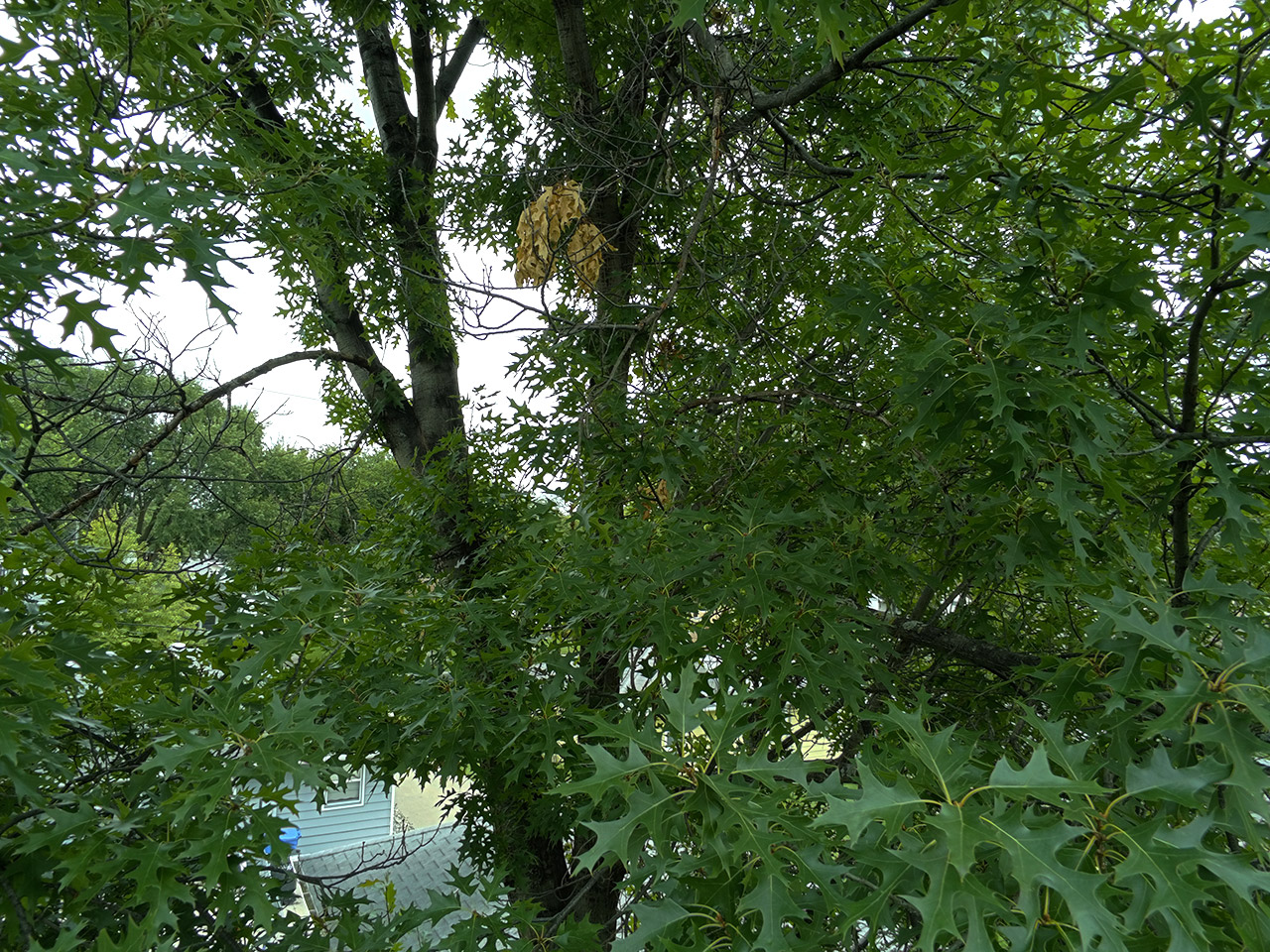 Looking at the photos captured in the tree, I assumed the camera wasn’t accurately capturing the light of the sky. However, given the state of the sky at that moment – gray, dull, overcast – it turned out that the camera did a pretty decent job capturing reality.

The gimbal most certainly works, image stabilization is on point. Some image artifacts appear at some point between the capture and the final processing on YouTube, which isn’t ideal, but could likely be improved in a future software/firmware update. You’ll see a bit of this in the video above in the shed paneling and drone moves quickly along the fence.

ALSO notice near the end of the video above how close we got to crashing into the fence. This drone can push in at full speed and reverse far, far quicker than we expected. It was a good surprise.

The drone we’re reviewing today is called Parrot ANAFI FPV, in what Parrot calls their “ANAFI FPV All-In-One Pack.” This is the latest iteration of the ANAFI drone series from Parrot.

Alternate iterations of the ANAFI drone include the ANAFI (on its own, without accessories), the ANAFI Extended (a similar package with a case instead of a backpack and no FPV headset), and the ANAFI Thermal. The Thermal model is the most expensive of the bunch, what with its built-in FLIR thermal camera and all – and the original ANAFI on its own is the least expensive.

The ANAFI drone on its own, without accessories, undercuts its most direct competition. DJI Mavic Air will run you around $800 on its own, while the ANAFI comes in at approximately $700. It may then seem like the obvious choice to go with a “Parrot ANAFI FPV All-In-One Pack” when given the choice amongst the lot, given that its starting price is the same as the DJI Mavic Air alone: $800 USD.

The ANAFI FPV All-In-One Pack includes 1x ANAFI FPV quadcopter drone, 1x battery, 1x Skycontroller 3, 1x Cockpitglasses 3, 1x 16gb SD memory card, 1x USB-C cable, 1x extra set of propellers. All of this comes in 1x ANAFI FPV backpack which doubles as a takeoff pad for the drone should you happen to be in an environment in which the ground is less-than-friendly. 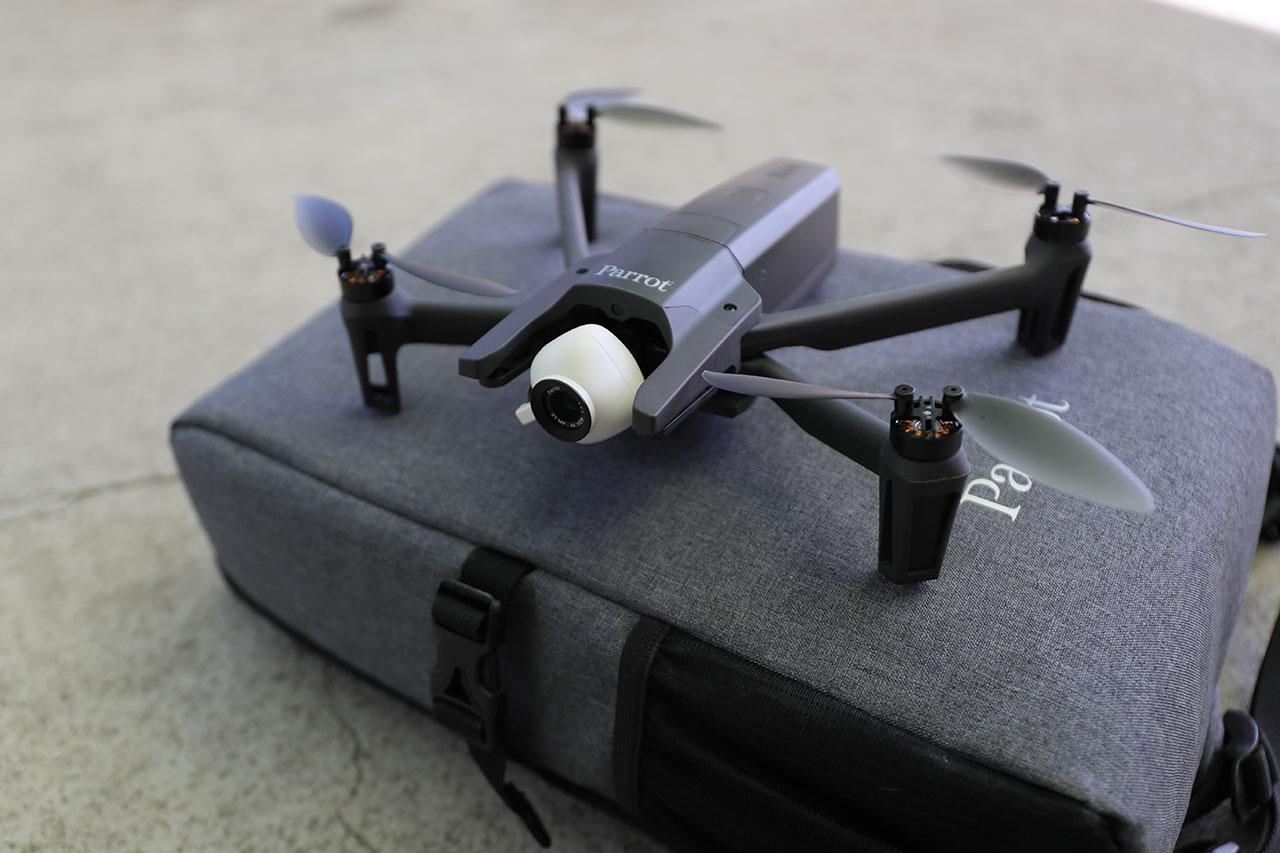 Pre-orders and/or Pre-sales as well as in-store availability all begin in early September of 2019. We’ll update you on the exact date and time as soon as it becomes available.