Oculus VR sends invites to the press for a consumer-related event that promises to reveal market-ready hardware. What you’re going to see isn’t all that revealing, but the differences between the newest developer model of the Oculus Rift virtual reality headset and the first consumer hardware are few and far between. What you’re going to see at this special event for the headset isn’t as important as who will be there – who will be presenting the first apps and games for the Oculus Rift as it’s set for release in early 2016.

This special event will take place on June 11th, 2015 in San Francisco. The image you’re seeing here is the same as Oculus VR released earlier this month when the consumer model release was first teased.

Click or tap this thumbnail for a full-sized version of the image. 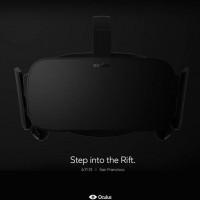 Meanwhile there’s one massive list of VR Jam finalists who will go on to Round 2 of judging. Amongst these names are the creators of 37 Games and 24 Apps or Experiences. Keep them in mind when you get your Oculus Rift in 2016 – they’ll be on the shortlist!

We’ll bring you the final list when the announcement is made. Until then, head to our VR-XP portal for more virtual reality experiences!