A 3D touchscreen display prototype that can be pinched, pulled, and pushed around might represent the future of digital interaction, allowing immersive data to be physically manipulated. The concept, Obake, is named after Japanese shapeshifting folklore and the handiwork of an MIT Media Lab team led by Dhairya Dand, combining a flexible rubber surface, a Kinect sensor for motion tracking, and a projector for creating a dynamic image your fingers can dig into.

In a way, Obake is similar to a drum head, only one which is considerably more flexible than you’d find on the average snare. By pulling and pushing on the silicone surface, the user can navigate through the projected image, with Kinect sensors tracking where the layer is flexed to. 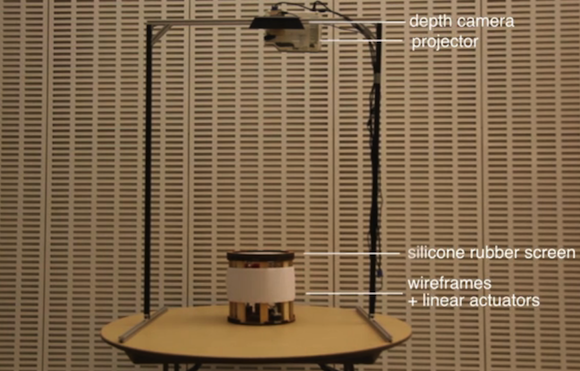 However, an array of linear actuators underneath the surface are also present, and used to maintain shapes even when the user stops pinching and twisting them. So, you could pull out a “mountain” peak and have it stay protruding, with the projected data – which could be mineral content, for instance, or geographical level lines – adjusting to suit the 3D worksurface.

The team behind the prototype has also had to come up with a new palette of touches and gestures
to suit the touchscreen’s new abilities. That includes “intrude” and “extrude”, where you can push through the screen or pull it up, and “S bend” which – though it sounds like a Samsung plumbing tool – involves pulling in one area and pushing in another simultaneously. “Stitch” is where two points are pulled out and stretched together, linking data, and there’s the ability to make more complex shapes by, for instance, “extruding” a mountain and then “prodding” an “intrude” indent into it. More moderate use of the actuators can introduce friction, too.

It’s not the first time we’ve seen touchscreen technology that tries to escape from two-dimensions, though it’s certainly the most complex. Nokia demonstrated its Kinetic concept smartphone back in 2011, for instance, which mounted a flexible display in a rubberized chassis that could be bent and twisted to navigate the interface, though no production version ever arrived.

Meanwhile, other companies are working on the sensation of touch, if not the physical movement. Senseg uses an electrical field to fool the user’s fingertips into feeling different textures on what is in fact a smooth glass screen, and at one point was rumored to be included in Apple’s iPad. Rather than deforming the display, Senseg’s “tixels” stimulate the nerves in the fingers which normally register vibration, giving the feeling of sandpaper, silk, or anything else the UI designer requires.

Obake is currently a working prototype, though there’s no telling when it might ever cross over into a commercial product.