NYPD wants access to ALL iPhones (with a warrant)

The New York City Police Department says they’d like Apple to unlock every iPhone currently subject to a court-ordered search. Once the San Bernardino doors are broken down by the FBI, the NYPD has made clear: they want in, too. That’d mean every iPhone entered into evidence in a court case and subjected to a search ordered by a judge could be forced open by law enforcement, courtesy of a piece of software they’ve forced Apple to create. That software would be an entirely new version of iOS which the FBI (then the NYPD, and every other law enforcement agency in the USA) would then install on each iPhone, bypassing Apple’s security measures, opening the locks to access data. You might be asking yourself, “why is that so bad?”

As you’ll read below, Apple didn’t always say “no” to requests for unlocking phones for evidence in court cases. It was only once Apple started to produce iPhones with A7 processors inside that the company made clear that they would no longer be turning over data with such ease. Not that they’d be able to get in if they wanted to.

Apple’s software/hardware security is now so secure that not even they are able to get in if a user has set a password on their iPhone.

Apple’s measures move the responsibility of access to this data away from themselves, placing the burden on law enforcement instead.

Instead of merely asking for access, as they had before, the FBI is demanding that Apple break in to a private user’s phone. To do this, Apple would need to re-write iOS to circumvent their own security measures. Apple suggests that creating this OS would be forcing the company to do what they’re not legally obligated to do. In addition, creating a whole new OS would be a massive amount of work.

In said interview, Vance makes several admissions – one of which sheds light on why Apple is so staunchly opposed to committing what it feels is an act against its own best interests, legal or otherwise.

Manhattan district attorney, Cyrus R. Vance Jr.: “Since Apple changed its operating system in the Fall of 2014, to re-engineer it so that phones could not be accessed even with a valid warrant, there’ve been 175 cases in our office – using the new operating system that we are not able to get in – to look at phones which need to be analyzed to build criminal cases, and indeed to make sure that we’re prosecuting the right person.”

“Those cases range from homicide to sex abuse, sex trafficking to cyber crime. So at the state and local level, where 95% of the cases in the country are handled, our inability to access data on cell phones, which are being used by criminals to communicate and to store data, is a real problem.”

“The San Bernardino case presents one example of a case involving terrorism, where federal government believes that critical evidence may be on that phone. There are tens of thousands of other cases around the country in investigations relating to homicide, sex abuse, where data is going to be on smartphones, and prosecutors, police officers need to access – with a court order – in order to do the right thing and get the right result in each of those cases.”

To visualize why Apple does not want to open this back door, we turn to political illustrator Stuart Carlson. 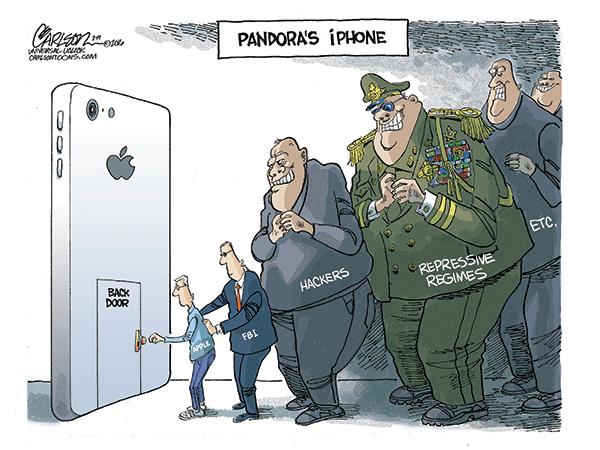 You’ll notice the language Vance uses aims to sway the listener with guilt and fear. He uses the word “terrorism” – which should have no baring on the legal proceedings at hand, as well as “homicide” and “sex abuse.” He even goes so far as to suggest that Apple giving law enforcement access to phones would be to “do the right thing.”

Objectively speaking, this case should have nothing to do with any of those terms. No case of any unique kind of crime currently has any direct route to getting Apple to unlock an iPhone.

Oddly it is Vance who answers this question with his own supposed confusion about the situation.

D.A. Vance: “In September of 2014 with iOS 7, Apple was able to respond to court-ordered search warrants, and there was never a complaint that iOS 7 was an operating system that was insecure. Or that my data on my phone was at risk of being stolen. I don’t know what changed, between September 30 and October 1, when they introduced iOS 8…”

Charlie Rose: “What do you think changed – they probably had a better operating system.”

D.A. Vance: “Well… I think they made a decision, obviously consciously, to engineer out of the phones their ability to open them. And I think Apple is a great company, phenomenal company – as is Google – but no company is above the law. And we have relied upon our 4th amendment principle where reasonable searches were permitted, if judges concluded based upon a presentation of the evidence that there’s probable cause, that there’s evidence of a crime.”

Charlie Rose: “Well I assume the reason they did that is they didn’t want that responsibility of having a door in the back end. And that they basically wanted to say, ‘the best way for us to protect the data that is within a phone that we sell is simply to not even to give us [access], to encrypt is so well that we don’t have access to it.”

Apple did create a better operating system, but even better yet, they started implementing hardware that encrypted data so well, even they, Apple, could not access it. This is called the Secure Enclave – standard in all Apple mobile devices with the Apple A7 processor and newer.

Encryption so strong that not even Apple can break it. 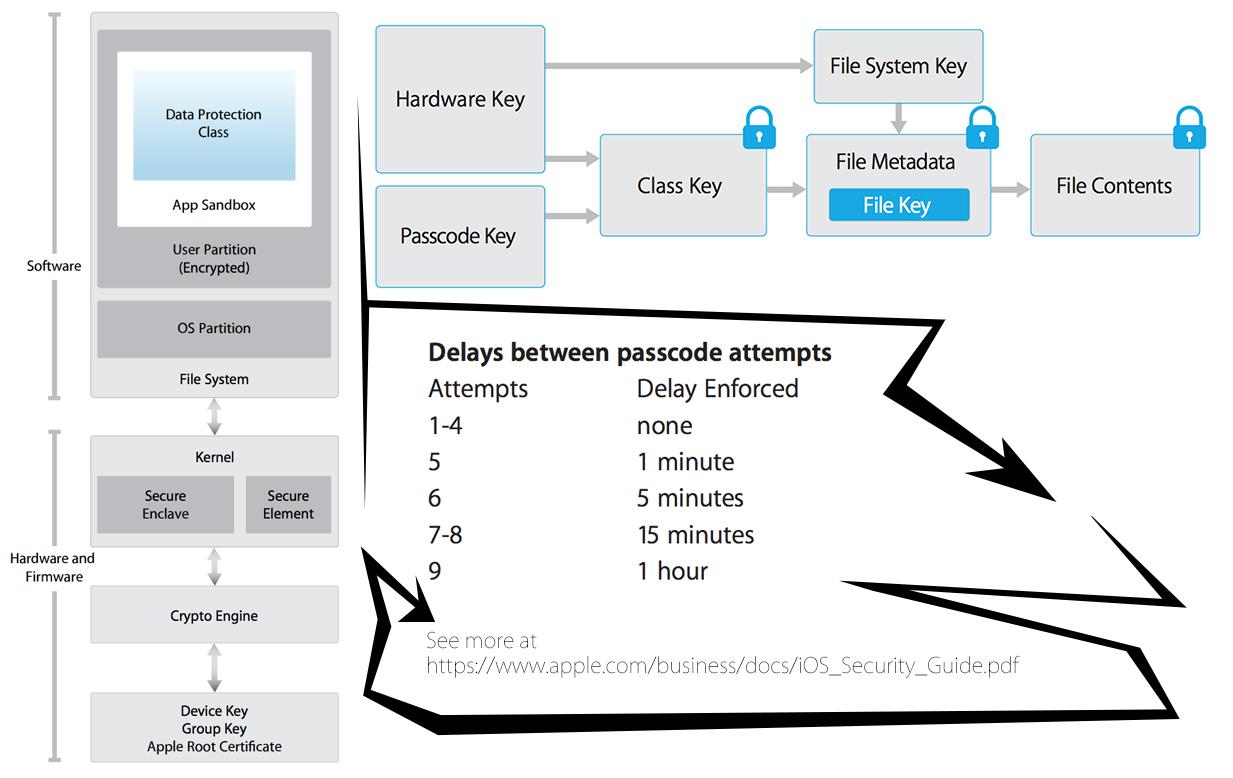 Apple is contending that if they did, indeed, create such an operating system, they’d be un-doing all of the security measures already in place on iPhones made in the last few years. As there is no perfect way to keep track of said operating system (that they’d have to create), they’d potentially open the back door not only to the FBI, but to any other hacker that wanted to gain access.

Vance continued, suggesting that America is in an all-or-nothing sort of situation. That unless they’re given access to these smartphones, we’ll have a situation in which criminals are given a free ticket to a tool with which they can commit crimes without consequence.

D.A. Vance: “I understand, as we all do, I think, the need for privacy. I want privacy. At the same time, if you put privacy so far over public safety, what you’re going to get is a world with lots of privacy, but also a lot of crime. Because criminals understand that these devices are warrant-proof, they can use them to communicate with each other without fear of ever leaving evidence and I don’t think that’s the world that America wants to live in.”

Vance is suggesting that if you want privacy, you’re going to pay for it with crime.

Also of note: this week, sources like the New York Times have quoted Rose and Vance from this interview, suggesting that the following exchange occurred:

Charlie Rose: “So in fact, if somehow the government can get Apple, the company, to give them a way in to the phone used by the San Bernardino shooters, you’ll want the same kind of right to get access to phones that are involved in cases under your jurisdiction.”

This did not happen.

While Vance may have implied (many times over) that he wanted court-ordered access to iPhones, lots and lots of iPhones, he did not say “Absolutely right” in response to Charlie Rose’s question.

Have a peek at the timeline below for additional insight into this case. This is just the beginning.