This past week we’ve had the opportunity to have a peek at one of the many new features involved in the NVIDIA Tegra 4 processor technology family: Chimera computational photography. The NVIDIA Tegra 4 (and Tegra 4i) SoC works with what they’re calling the “world’s first mobile computational photography architecture”, and today what you’ll be seeing is one of the several features NVIDIA will be delivering to smartphones that utilize their processor. This first demonstration involves “Always-on HDR” photography.

What you’re seeing here is a demonstration done by NVIDIA at the official GTC 2013 conference. That the GPU Technology Conference, a multi-day event we attended with bells on – have a peek at our GTC 2013 tag portal now for everything we got to see – with more coming up in the future! The demonstration shown here is of a technology originally revealed earlier this year at NVIDIA’s keynote presentation at CES 2013 – head back to the original reveal post to see a whole different angle!

Here a high dynamic range scene has been arranged behind a device running the Chimera photography experience with an NVIDIA Tegra 4 (or perhaps 4i) processor inside. While a traditional HDR-capable camera takes two images one-after-another at different exposures and fuses them together, NVIDIA’s Always-on HDR feature works to take away the two negative bits involved with traditional HDR by allowing the following:

• Live preview through your camera’s display (on your smartphone, tablet, etc).
• The ability to capture moving objects. 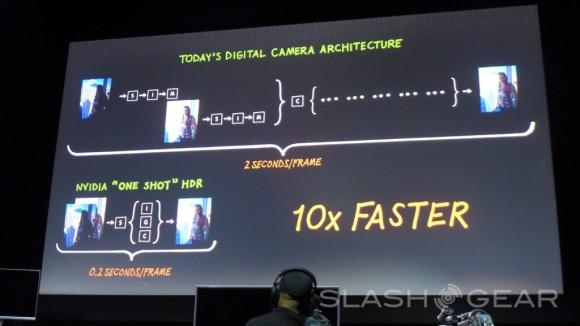 With traditional HDR, if you’ve got someone running through the scene, you’ll get even more of a blur than you’d normally get because you’re effectively taking two photos. With NVIDIA’s method you’re capturing your image 10 times faster than you’d be capturing it without a Tegra 4 working to help. Because of this, when you’ve got a Tegra 4 processor in your smartphone, you’ll be able to use a flash in your HDR photos, use burst mode to capture several HDR shots in quick succession, and you’ll be able to capture HDR video, too! 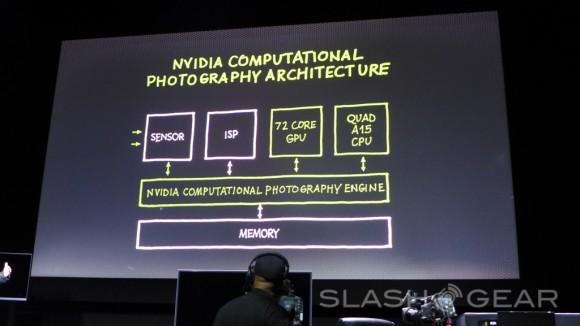 We’re very much looking forward to rolling out with the Tegra 4 on smart devices soon – until then, we can only dream of the colors! Check out the full NVIDIA mobile experience in our fabulous Tegra hub right this minute!