NVIDIA has slashed the price of its SHIELD portable Android gaming system, opting to trim the handheld to just $299 based on feedback from gamers. The clamshell console, which goes on sale on June 27 the company has confirmed today, was originally up for preorder at $349, but NVIDIA says that feedback from E3 and other events has convinced them that SHIELD will be “a home run” if it dips under the $300 mark.

As a result, the company has trimmed $50 off the sticker price ahead of its retail availability. Those who have already preorder a SHIELD will only be charged $299, just like new orders, when they start shipping out next week.

SHIELD has a 5-inch, 720p HD multitouch display which flips up from a traditional-style gamepad controller. Inside, there’s NVIDIA’s Tegra 4 chipset driving things, along with the sort of connectivity you might expect to find inside an Android tablet. 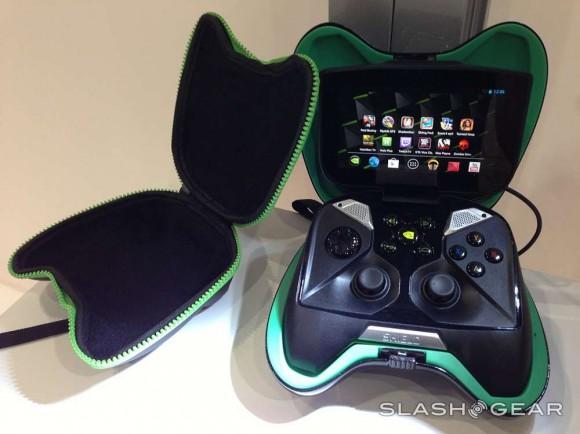 However, unlike such a tablet, SHIELD is intended to work in two different ways. The first is as a normal, standalone Android device, running games and other software downloaded from the Google Play store. However, SHIELD can also hook up wirelessly to a PC with an NVIDIA GeForce graphics card (as long as it’s compatible) and open up remote gameplay, basically being used as a controller for Steam games. It’ll only be in beta when it first launches, however.

We’ve got full details on how the gameplay on SHIELD works, as well as a run-down of Tegra 4 in a previous SlashGear 101. We’ve also spent some playtime with the first batch of accessories, including the Nyko PlayPad Pro which in effect turns SHIELD into a miniature Android game console.

Your $299 gets you SHIELD, the silver lid, an AC adapter, USB cable, and two games: Expendable: Rearmed, and Sonic 4 Episode II THD. NVIDIA also offers a carrying case for $39.99, and custom casing tags for $19.99.