Having found some of the most recent Free to Play games out on the market today to be undeniably awesome, NVIDIA has decided to stoke the fire with a set of F2P Bundles with their GeForce GPUs. When you purchase a GeForce GTX graphics card (as long as it’s 650 or above) you also get a set of in-game credits for three of the most excellent FPS games in play today. These games are Planetside 2, World of Tanks, and everyone’s favorite mech warrior free-for-all: Hawken!

Each of the games included in this release are and continue to be free for you to download and play with or without a purchase from NVIDIA – what you’re getting here is cash inside each game. Each of the games here is free to download and play, making a profit from in-game purchases that include feature upgrades, personalization of in-game elements, and oddities galore. 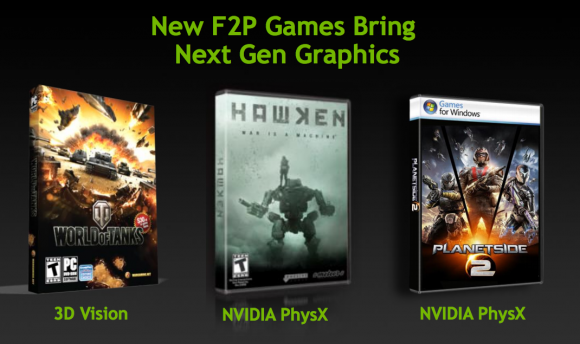 But it’s not just the free-to-play fad’s popularity in and of itself that NVIDIA is aiming for, it’s the situation this inflicts. Millions of users play these games with below-recommended hardware, meaning they’re nowhere near the optimal experience these games are able to present. With a GeForce GPU, they’ll get heavy bumps. 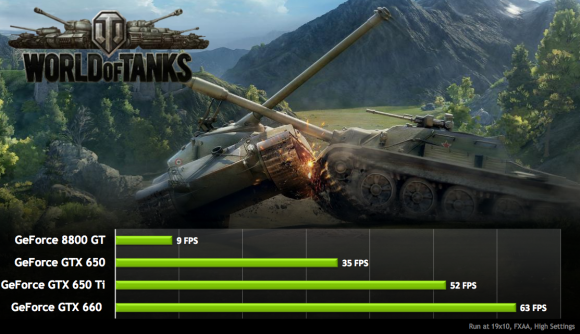 With World of Tanks you’ll be getting a big boost in graphics power – not that you’d need to be working with a top-power GeForce card to make this game work, but with an upgrade to a GeForce GTX GPU, you’ll have much more realistic gameplay and, when you get down and dirty with the stats, straight up higher FPS. Planetside 2 is a game you’ll be jumping into with massive boosts in usability as you jump into the GTX range of processors – there’s really no comparing 10FPS and 60+FPS when you’re hunting on alien worlds. 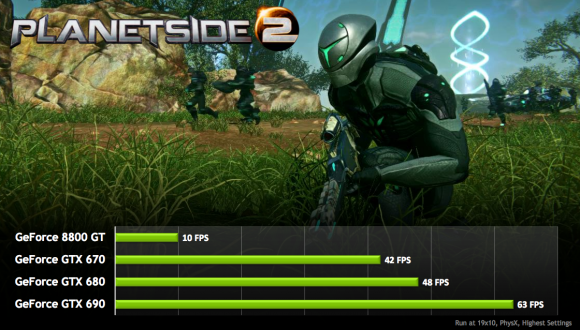 Then there’s Hawken, which benefits directly from NVIDIA’s own PhysX technology. Have a peek at the difference in gameplay with PhysX on and off in the demonstration video below. Also be sure to check our Hawken review to find out more about this beastly game.

The two deals up for grabs here are as follows: purchase a GeForce GTX 650 / 650 Ti and you’ll get $25 for each of the three games, equaling $75 in-game credit total. With a purchase of a GeForce GTX 660 or higher, you’ll get $50 in in-game credit for each of the three games above, that equalling out to be $150 USD. In both cases that credit is at least 75% of the original cost of the card – so if you’d have otherwise been spending that cash in-game, you’re golden! 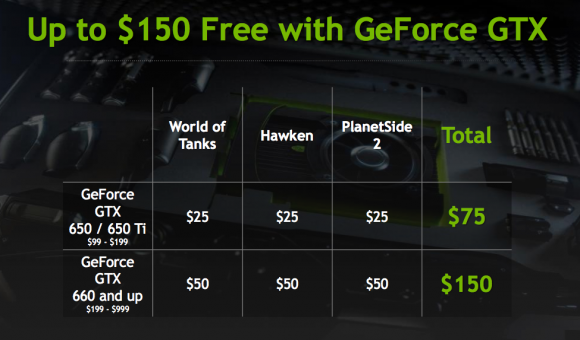