What’s better than a top-of-the-line graphic card for a rabid PC gamer? Try four strapped int to the same motherboard and running in tandem. This sort of thing’s been possible for quite a while (for those with the cash for compatible hardware and power bills) but it’s always fun to see the latest and greatest pushed to the maximum levels of performance. So it is with NVIDIA’s brand new GeForce GTX 680, the company’s latest in ultra-powered GPU excess. Hardware.Info strapped four GTX 680s into a quad-SLI motherboard and let the benchmarks fly.

Tests for benchmarks and games were run at both 1080p resolution and a staggering 5760×1080 configuration of three monitors, using NVIDIA’s proprietary Surround technology. As most gamers know, multi-card solutions aren’t always a cost-effective option: after two GPUs (or in some games/tests just one) performance becomes a system of diminishing returns. The 3DMark Vantage test demonstrates this: a single GTX 680 scored 35519, while two 680s working in SLI tandem scored 46842, a rather typical result of  just under 30% gain. When three and four 680s were partnered together, the score increased marginally to 47075 and 49111, respectively. While absolutely blistering, neither score was enough to best ATI’s Radeon HD 7970 in triple and quad configurations.

The newer 3DMark11 shows a more linear progression: a single GTX 680 scores 9747 (better than any other single card) with two cards scoring 15343, a 57% improvement. Bumping up to two and three cards yields a result of 17649 and a whopping 21107, with four cards more than doubling the benchmark results of a single card. In a 4-GPU configuration the GTX 680 beats out the Radeon HD 7970, but the AMD card triumphs in triple Crossfire mode. 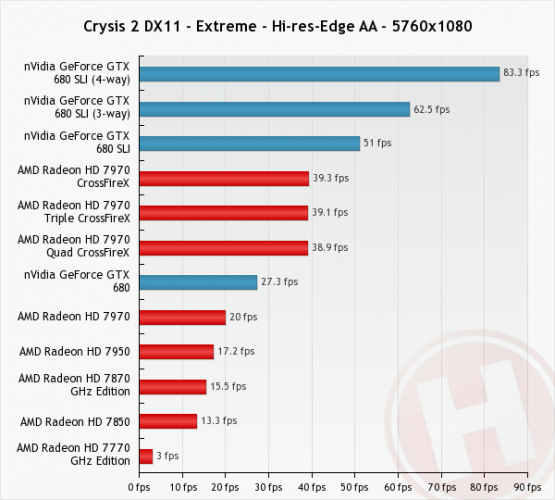 In a runthrough of Batman: Arkham City, single cards did better than their SLI and Crossfire counterparts on all tests, showing poor utilization of multiple GPUs on the part of the developers. In a single-card mode running at high settings, the GTX 680 showed a 30 frame per second improvement over the Radeon HD 7970. Running through Battlefield 3 gave AMD the victory, with their Triple Crossfire coming out on top and NVIDIA’s cards once again performing better in single operation (except when using multiple monitors).

Crysis 2 showed a linear progression from one through four NVIDIA cards, with scores of 77.4, 98.9, 99.7 and 99.8 frames per second respectively. With three monitors running at ultra-high quality, the single card scored just 27 frames per second, with multiple GPUs showing dramatic improvements at 51, 62.5 and 83.3 frames per second in dual, triple and quad SLI respectively. The GTX 680 beat out the AMD card at every turn in the Crysis test.

I’d encourage spec hounds to check out Hardware.Info’s full report for a more thorough breakdown. The takeaway is this: more cores means more power, but not necessarily for the game you’re playing. Spending the extra dough on an SLI system becomes less and less advantageous the more money you spend – dual SLI would seem to be the sweet spot for enthusiasts, while triple and quad SLI cards and motherboards are best left to the one percent.