NVIDIA’s first Tegra K1 has been making waves today in the Acer Chromebook 13, but now it’s the turn of its arguably even more interesting “Project Denver” sibling to take the spotlight. Based on NVIDIA’s own 64-bit dualcores, Tegra K1 “Denver” will be the first 64-bit ARM processor for Android, and the chip firm says it’s already working on an Android L build to suit.

The Tegra K1 as it stands uses quad A15 CPUs running at up to 2.3GHz. However, NVIDIA always had its own 64-bit, custom cores in the pipeline, and the company claims its dual-CPU cores can run perform significantly better than quad or octa core mobile CPUs.

In fact, NVIDIA says it expects performance on a par with some desktop processors at certain tasks, though using far less power.

Each of the cores has 7-way superscalar microarchitecture, which means up to seven concurrent micro-ops can be run per clock. There’s also a 128KB 4-way L1 instruction cache, a 64KB 4-way L1 data cache, and a 2MB 16-way L2 cache, which NVIDIA says services both cores. 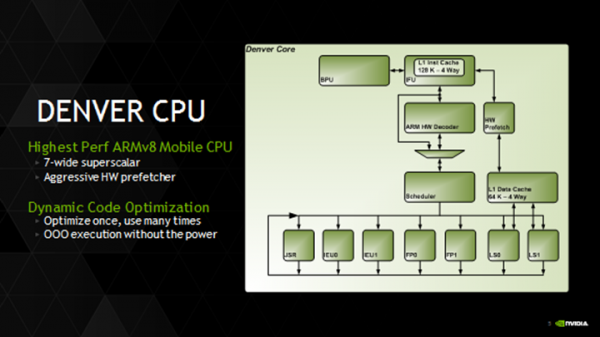 Denver also uses Dynamic Code Optimization, which can apparently figure out the optimal routines for different apps and then save them in a dedicated 128MB cache. That cuts down on repeat re-optimization, and app developers won’t need to rewrite their software in order to take advantage of it.

For OEMs, the Tegra K1 “Denver” is pin-for-pin compatible with the first, 32-bit version, so it shouldn’t be too problematic to updated devices from a hardware perspective, at least.

Of course, consumers will probably care more about performance improvements, with NVIDIA also claiming a bump in battery life too. The first devices to use Tegra K1 “Denver” will hit the market later this year, NVIDIA says, though hasn’t detailed which partners are onboard yet.