The Nubia Alpha is called a “smartphone” by its maker. From afar, it seems more like a slap-bracelet made into a very 2019 sort of display concept. It has a display that’s flexible and wraps around the wrist of the user. It also tells time, but it’s not supposed to be seen as a smartwatch.

The concept here is far more important than the details. Especially since Nubia doesn’t have a fantastic track record for getting smartphones into the hands of consumers in the United States. What we’re interested in here is the functionality of the display and what the point is of the entire device in the first place.

This device has a watch band, much like a standard watch, but the display spills down and around these arms. This display, that’d normally be relegated to the front face, is now also down around the front and up around the back. Nubia’s not shown a whole lot on what the operating system will look like – but as of today we’ve got our first look at what the final product will (apparently) look like in real life.

Cameras and sensors to the right and/or left of the display are large – not attempting to hide whatsoever. A pair of hardware buttons rest on the right side of the front of the device. There’s a single mic hole (at least one microphone) likely for videos and for connecting with smart assistant software.

But what are the arms for? Still up in the air, it’s not clear what good the rest of the display really is – or will be.

UPDATE: A bit of a look at that Wearable OS – looking pretty fancy. Maybe Android inside?

The specs, anyway – even though they’re of very little concern since it’s extremely doubtful we’ll see this device up close and in person in the United States any time soon. Nubia suggests this device has a 192 x 960 pixel OLED display that’s flexible and has multi-touch touchscreen capabilities. The display was manufactured by Visionox, and it’s covered not by glass, but by Polyimide (a heat-resistant polymer).

Inside the device is a Qualcomm Snapdragon 2100 (there’s a slightly newer 3100 for other wearables, if you’d like to know), and it’s got 1GB RAM. There’s 8GB internal storage, and a 500mAh battery hidden somewhere inside. Nubia suggests the device will last between 1 and 2 days on a single charge – which seems almost impossible, given the size and brightness of the display – but we shall see! 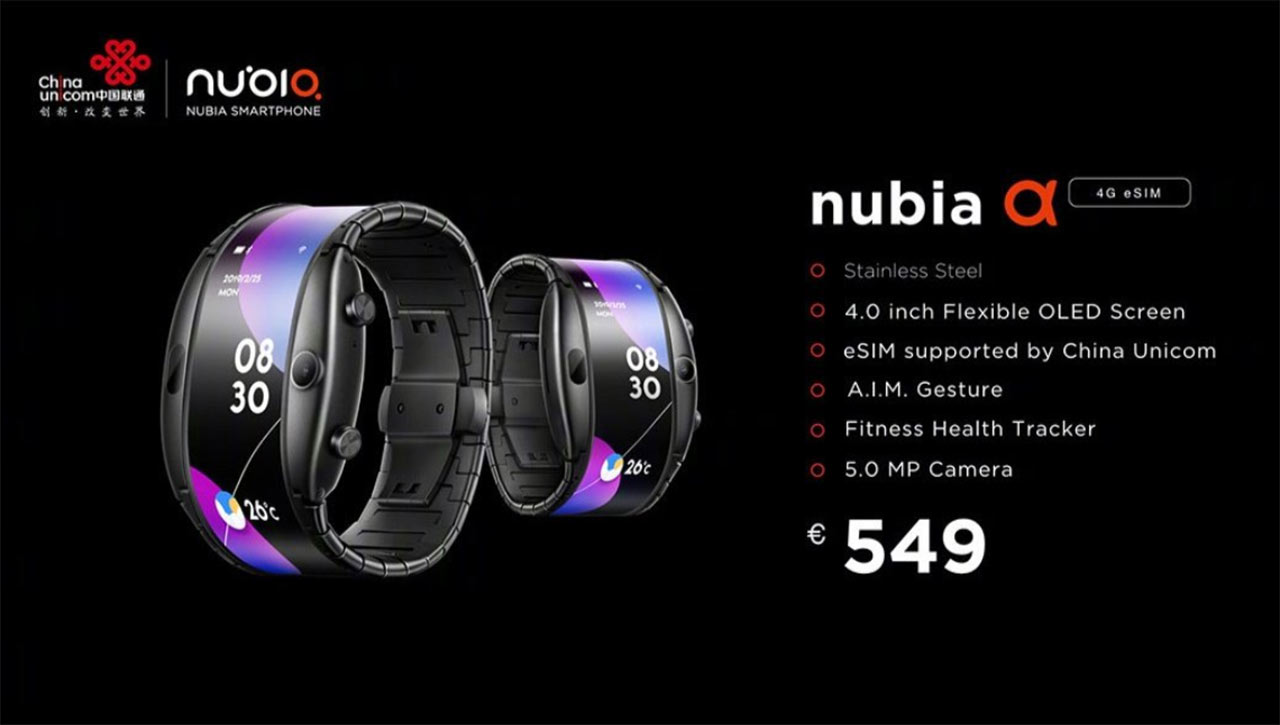 This device also has 4G eSIM mobile data support as well as Wi-fi and Bluetooth. Oh there’s a camera too, because we didn’t learn our lesson not to do such things with the Samsung Galaxy Gear back in 2013. There’s heart rate monitoring in this device, as well as a “fitness tracker” of some sort.