Barnes & Noble saw NOOK sales plummet 34-percent in the last quarter, and will turn instead to licensing the NOOK brand to future ereading tablets so as to minimize its losses, the company has confirmed. B&N will continue to make the NOOK Simple Touch and Glowlight models in-house, but the eventual replacements to the NOOK HD and HD+ will be the handiwork of other companies, with NOOK branding simply applied later.

Overall, the NOOK business – which includes not only hardware sales but digital content and accessories – saw $108m in revenues for the quarter, and $776m for the full year, B&N says. That’s down 34-percent and 16.8-percent respectively, which the retailer blames on both an ebook shortfall and on lower than hoped-for ereader demand.

For instance, ebook sales dipped 8.9-percent in the quarter: B&N says that’s partly down to the comparison with high-profile titles last year, which included The Hunger Games and Fifty Shades of Grey. Overall, though, digital content sales were up 16.2-percent for the full year. 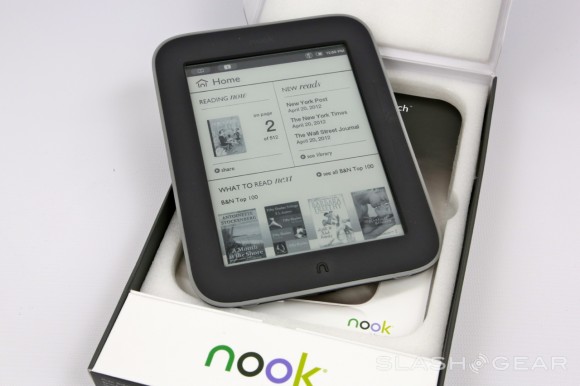 Meanwhile, Barnes & Noble will continue its price cutting on the NOOK HD and HD+, with plans to keep the current discounting in effect through the holidays. There’ll also be ongoing support and firmware updates, B&N has promised, though it’s unclear how long owners can expect that to continue.

Exactly which companies B&N might partner with on future NOOK-branded slates remains to be seen. The company hasn’t struggled to develop its own distinctive and relatively high-spec hardware – the HD and HD+ had high-resolution screens well in advance of Amazon’s comparative Kindle Fire slates – but instead had issues raising their profile in a market dominated by Kindle and, to a lesser extent, iBooks.