The tablet market is heating up, and for once it’s not Apple, or Google, or Samsung doing the shaking, but booksellers Barnes & Noble. The new NOOK HD and NOOK HD+ may carry the same name as B&N tablets of before, but they’re worlds apart in hardware and clarity of software ecosystem. Not content to chase Amazon and Apple on price alone, there’s an apparently legitimate attempt on B&N’s part to tune each model to the audience most likely to be interested in it, rather than chasing some imaginatively aspirational but likely non-existent “perfect” consumer.

Barnes & Noble’s first big surprise was the hardware package it had put together. Both new NOOK tablets are lighter than the competition, comfortable to hold, and well priced; the NOOK HD may look heavy on the bezel, but it makes it easier to grip like a paperback book, while the NOOK HD+ is half the price of the new iPad but still manages to feel roughly as solid as Apple’s slate.

The screen quality is what really catches your attention, though, with both the 1440 x 900 of the HD and the 1920 x 1280 of the HD+ looking not only crisp and sharp, but having great viewing angles and – thanks to the optically-laminated glass – graphics that seem to float just beneath your fingertip. If the Nexus 7 feels like it has made some quality compromises to hit Google’s price target, B&N has somehow managed to achieve its own competitive pricing without your fingers feeling it. 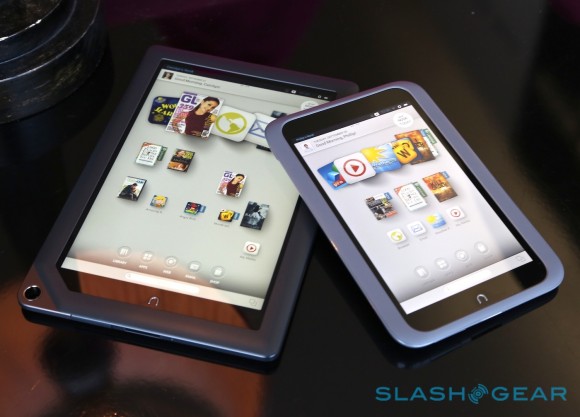 As for the software, that’s the second strong punch. It’s reskinned Android, something Google and the Android faithful might object to, but which makes sense for a media tablet like the NOOK and the sort of audience that B&N is aiming for. Sensibly it’s not bells & whistles for the sake of UI differentiation, but instead a number of modifications some of which Google could do worse than to borrow for core Android.

So, there’s multi-user profiles, because B&N’s customers didn’t want to buy a new NOOK for everyone in the house, but still wanted to allow everyone to use the tablet pretty much as they see fit. You obviously get access to the retailer’s curated app, movie, TV show, and ebook stores, but you can also lock them down – just as you can the browser, email, or any other apps – so that you can leave the HD and HD+ in the hands of your offspring without worrying about them accessing something they shouldn’t be seeing, or indeed charging dozens of downloads to your card. But, there’s also cross-profile sharing of purchased content, so that mom and dad can each read Fifty Shades of Grey without having to buy their own copy. 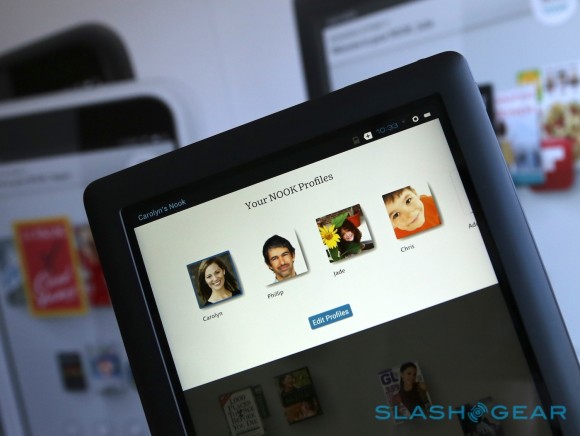 Although Amazon’s sales success – and the likely success of the NOOK HD and HD+ – may seem unusual at first glance, they’re arguably just evidence that few other Android tablet manufacturers have quite grasped what Apple did so well with the iPad. Like the iPod worked as a conduit for music sales, and the iPhone opened up the mobile app market, so the iPad put multimedia and software purchases in your face. Selling people a single piece of hardware is a way to make money once, but regularly selling them content to enjoy on it is a revenue stream that keeps on giving.

Even Google’s Nexus 7, blessed with a competitive price, seemed to be getting the message on the value of content. Rather than apps like the browser and Gmail, the Google Play media downloads were put front-and-center by default on the Nexus 7’s homescreen: big widgets leading into movie, music, and ebook downloads.

Google and ASUS may not quite be treating the 7-inch tablet as a loss-leader, but they’re under no illusion about where the ongoing revenue stream comes from. Even the bundled free credit of $25 toward Play purchases was only added to accounts which register a credit card, Google’s way of encouraging paid downloads rather than free app grabs. 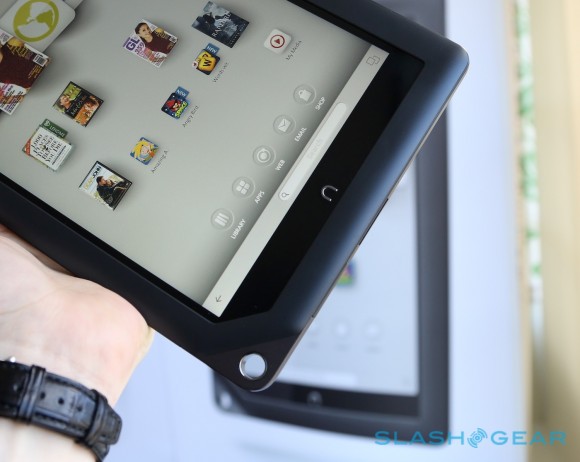 Barnes & Noble’s initial success will depend largely on how well stocked it can make its electronic stores. If users can’t find the content they want, they’ll look elsewhere. However, it also needs to adequately leverage its physical stores, still a differentiator from rivals like Amazon. Ironically, given B&N is best known for selling books, that didn’t work so well with ebooks, but the company could do more with DVDs and Blu-ray if it can play up the UltraViolet angle.

Buy a physical copy of a movie with the UltraViolet logo (or, indeed, whip one off the shelf of your collection at home) and you can instantly unlock a digital version through the NOOK Video store. So far UltraViolet has failed to gain any noticeable traction, but a tightly-integrated brick & mortar retailer/digital device duo could tip that in Barnes & Noble’s favor.

The NOOK HD and HD+ still have a battle ahead of them. The iPad has captured mindshare among those who don’t really care about the technology side, and for whom “iPad” and “tablet” are fast becoming interchangeable, while Amazon has a wealth of digital content for the Kindle Fire HD. Competitive pricing and eye-catching hardware is a good place to start, however, and the NOOK HD and HD+ already do enough to eclipse much of the Android tablet line-up for the mass market.