Nokia is exploring a dual-screen clamshell smartphone design that, like the Nintendo 3DS, would have both 2D and 3D displays. According to a patent application by the company, titled “Autostereoscopic Rendering and Display Apparatus“, the smartphone would have a glasses-free 3D display on its top panel and a regular 2D display underneath. A dual-camera array would be used to track eye position, creating an interactive 3D UI that could be controlled either via touching the bottom display (as on the 3DS) or via finger-tracking in 3D space.

By using eye-tracking, Nokia would be able to make far more realistic 3D animations. Currently the 3DS requires gamers to view the handheld’s display from a relatively narrow “sweet spot” in which the 3D effect is visible, adjusting depth with a manual control; Nokia suggests that this sort of system is “typically poorly implemented”. In contrast, Nokia’s system would be able to handle that automatically, leading to potential effects such as showing the “virtual shadow” of a 3D cube interface suspended over the bottom display. 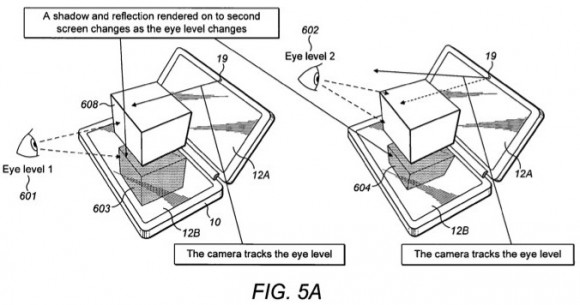 That shadow could move according to the user’s viewpoint, as if the cube was real. As the user “looked around” the 3D cube, the Nokia device could show different facets and change controls shown on the touchscreen underneath accordingly. Nokia isn’t just limiting this to clamshell phones, either; the application also suggests that the same system could be used in a slider form-factor or, indeed, on some sort of convertible tablet.

In another interesting twist, Nokia suggests that as well as the 2D touchscreen, the 3D panel could be a touchscreen as well: either responding to physical contact or, more usefully given its 3D abilities, “detecting the capacitive effect between the display surface and a further object such as a finger” or, in other words, tracking your movements in the space in front of the screen, as you interact with the virtual graphics.

Of course, there’s a big difference between a patent application and an actual device, but we can’t help imagine a new Nokia 3D Communicator with a three-dimensional interface.

[via IntoMobile and via Unwired View]