Nintendo may be riding high on Switch success right now, but if its new multi-screen game system patent is anything to go by, it could have even more outlandish designs in the pipeline. The console-maker has always been eager to push the limits of device design, after all: witness not only the Switch, with its docking station for both handheld and living room use, but the tablet-like Wii U before it.

Even they, however, look fairly pedestrian in comparison to a freshly submitted patent application from the company. In fact, the design Nintendo apparently has in mind arguably shares more in common with the Nintendo 3DS and other dual-screen handhelds. Just think on a larger, more flexible scale.

Dubbed simply “Game System” the application, spotted by Digital Trends, describes “a plurality of information processing apparatuses that are capable of communicating with each other” on an ad-hoc basis. That sounds complicated, but it boils down to something fairly straightforward. Think along the lines of numerous touchscreens that can be configured to “link” together into a combined gaming surface. 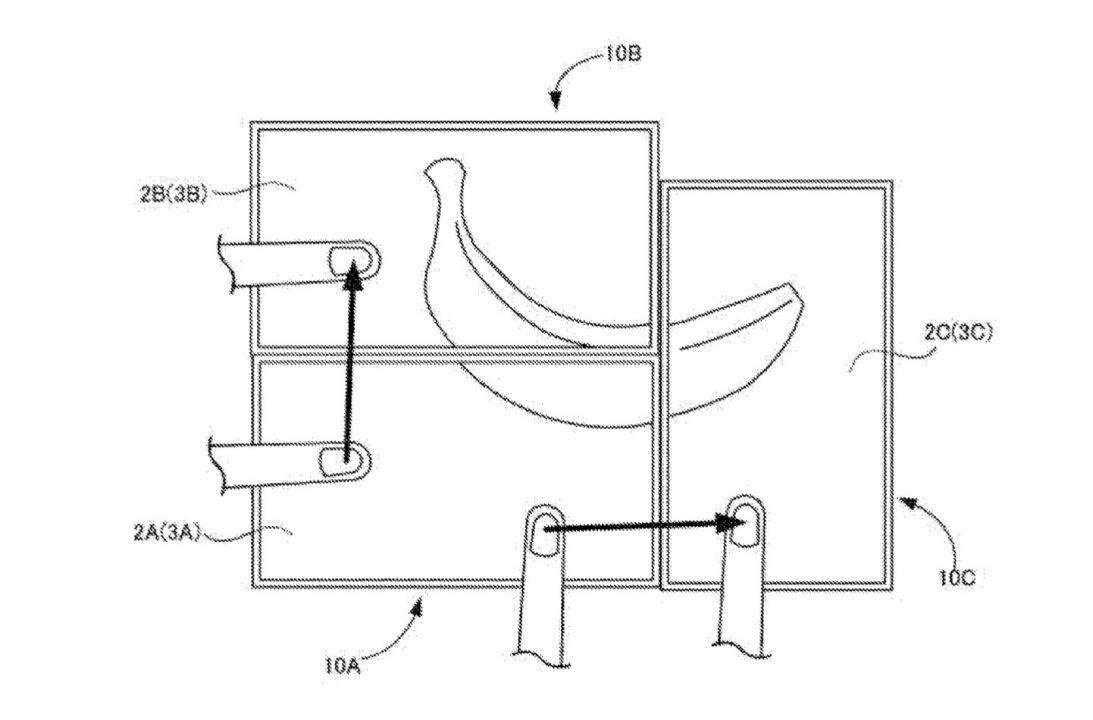 Each of those displays would, in fact, be a complete, standalone system in its own right. It would have its own processor and wireless radios, along with its own battery. The idea is that two – or more – of the panels can be non-permanently linked together, depending on the type of game you’re playing. 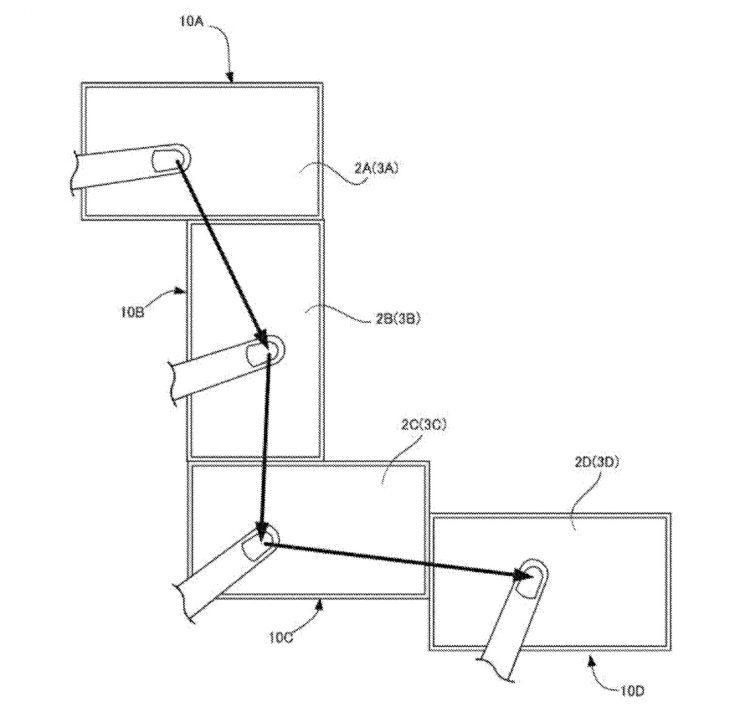 That could all be painfully complicated, if the pairing process wasn’t made straightforward. Nintendo’s idea is that players would simply position the units in the orientation they want, then draw a single, continuous line across the touchscreens. That would tell the processors the layout that the gamer has in mind.

The sections needn’t even be touching, in fact, for it all to work. By figuring out the delay in-between the gamer’s fingertip leaving the first panel and then hitting the second, Nintendo’s system could figure out their relative coordinates. 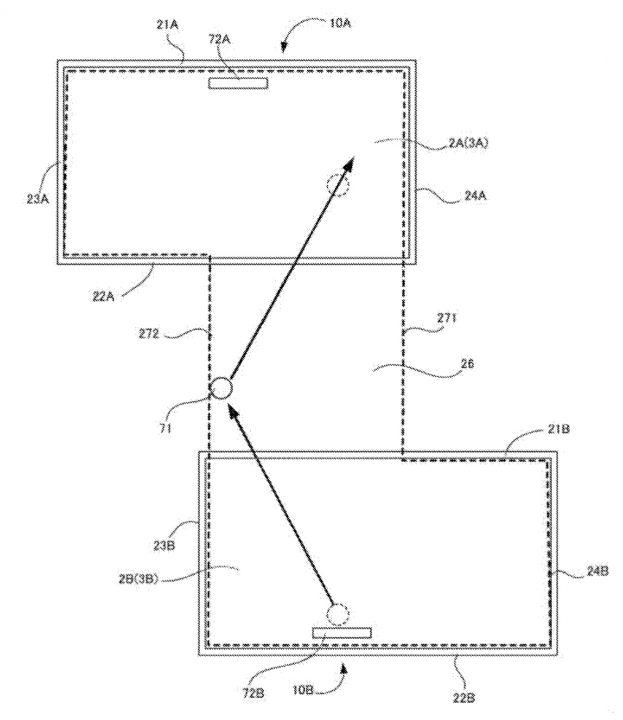 Nintendo makes a few suggestions as to what, exactly, the end result could be in terms of gaming. For example, you could have two panels and play a game of virtual air hockey across them: even if you were at opposite ends of a long table, the game would be able to figure out where the puck was in-between the two touchscreens. 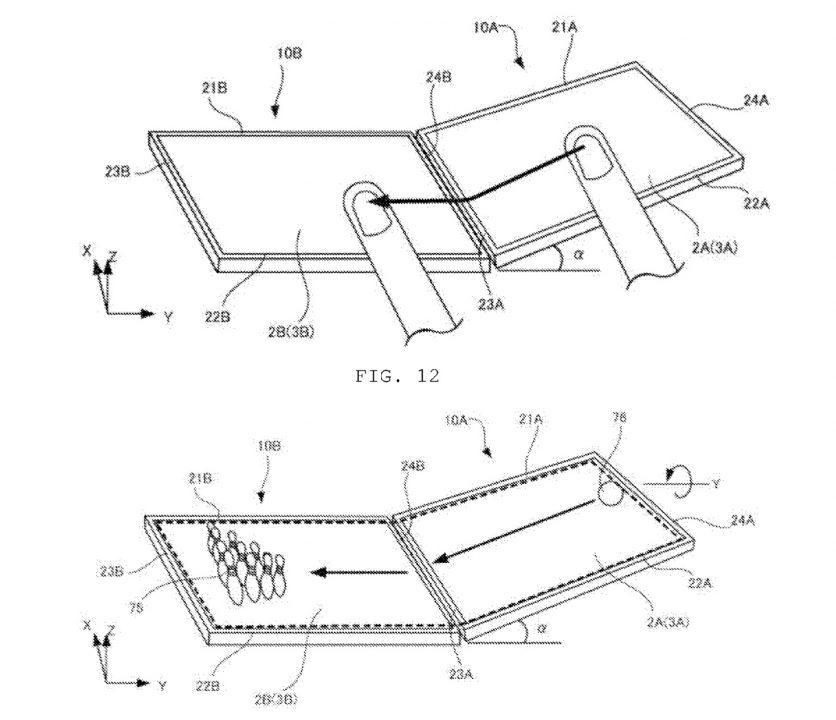 Alternatively, the orientation of one or more of the panels in 3D space could be used to add to the gameplay. Nintendo’s suggestion is virtual bowling: the screen with the bowling ball could be physically tipped up to send it rolling toward a set of pins on a second display. The more screens you have – say, if you and some friends get together and each have a unit or two to combine – the bigger the gameplay area can be, and while Nintendo envisages rectangular units the overall layout needn’t be so rigid. You could, even, stand some of the displays up so that they’re vertical, not horizontal. 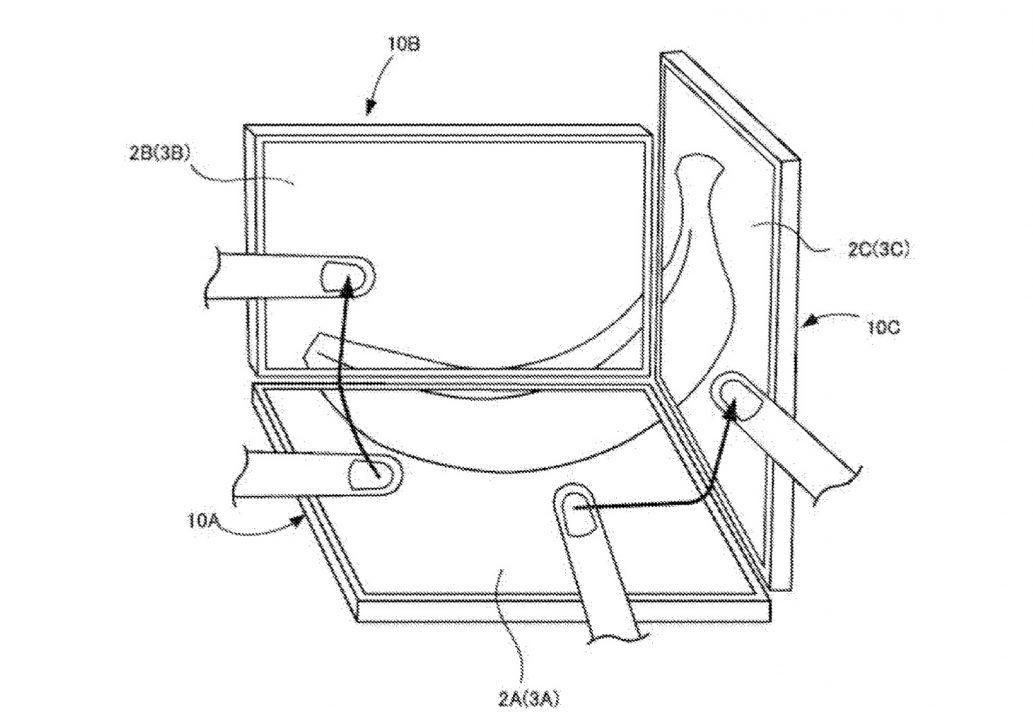 Nintendo isn’t the first company to come up with a way to easily and flexibly configure multiple displays into a single overall virtual service. Intel showed off just such a system back in 2009, in fact, dubbed the Intel Multi-Client Display. However, whereas Nintendo is envisaging gameplay, Intel’s vision was taking several smaller devices – like tablets – and combining them together for a much larger work surface.

We have to say, we prefer Nintendo’s idea more. Still, as always with patents, there’s no telling whether the ideas filed with the USPTO will ever actually graduate to production. Nonetheless, with Nintendo looking to push the envelope in Switch add-ons and accessories, we wouldn’t be too surprised if this particular idea was given extra room to grow in the company’s labs.