As titans like Microsoft and Sony brought forth new waves of games for their next-generation consoles coming later this year, Nintendo brought on an E3 2013 presentation with franchise continuations for the console they’d already had on the market for months: Wii U. Showing up via live video feed from Nintendo headquarters in Kyoto, President and CEO of Nintendo Satoru Iwata spoke on the future of the Nintendo Wii U, 3DS, and all games in-between. Super Smash Brothers, Mario Kart, and Monolith Soft bring the power to this conference.

The presentation lasted just 41 minutes – small compared to Sony’s several hours of madness and Microsoft’s extra push with game reveals pushed at the exact same time as Apple’s WWDC 2013 keynote – but such is Nintendo’s style, it would seem. Here Iwata made the case for the Wii U coming up in power in a big way, evoking such responses as “TEARS OF JOY HOLY C*** NINTENDO I LOVE YOU” from commenters on social networks and straight up inside YouTube.

You be the judge of how big these announcements were, of course – meanwhile you’ll be able to get slightly more expanded looks at these titles in our article on Wii U Mario Kart 8 for the racer in you – underwater, converting car, hover-bike, anti-gravity, and all. We’ve also got a larger look at Super Smash Brothers Wii U for you fighters out there – complete with Villager and Mega Man added to the mix! 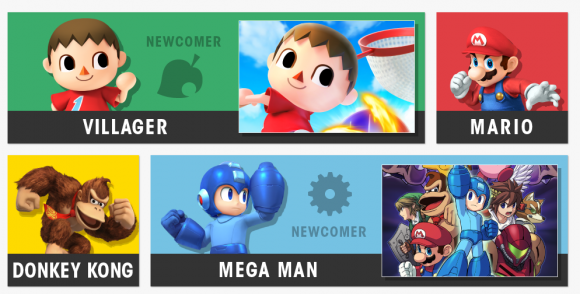 This presentation also held fast with Monolith Soft, a title that promises to bring mech battles and open sandbox exploration to Wii U in a completely unique way quite soon. Bayonetta 2 also marks the console for another “this is completely odd and strange” title, this time, as Iwata is keen to mention, with the lead character coming in with a haircut and completely new fashion choices!

Is it all enough to keep Nintendo in the mix as Sony and Microsoft bring on the Xbox One and PlayStation 4 later this year? We’ll have to see! Meanwhile enjoy this lovely clip from the above, showing how truly fabulous the evolving hair styles in Wii U games keep Nintendo on the forefront of style.