Google’s Nexus 7 may run NVIDIA’s cheaper Tegra 3 KAI chipset, but that doesn’t mean the 7-inch tablet isn’t capable of impressive speeds once carefully overclocked. Thanks to a new 2.0GHz ROM for the tablet cooked up by xda-developers, the Nexus 7 burned through Android Community‘s benchmarks and scored a whopping 8,082 in Quadrant testing. That’s double what HTC’s capable One X smartphone could manage.

The ROM itself uses an experimental kernel, not yet publicly available, to drive the Nexus 7 up to 2.0GHz rather than the 1.8GHz overclock we’ve seen in recent weeks. Even that slightly lower speed is enough for impressive performance, however, cracking the 7k mark in Quadrant.

Stability is described as having “a few issues” hence the absence of a public release, and according to Cory over at Android Community the Nexus 7 itself got somewhat warm during the tests. Still, the “Elite Kernel” is showing more than a little promise.

Out of the box, the Nexus 7 runs at 1.3GHz, ASUS and NVIDIA opting to prolong battery life rather than chase outright power. Thanks to the KAI chip, ASUS can use cheaper DDR3L memory for the tablet’s 1GB of RAM, helping Google hit its sub-$200 starting price goal. 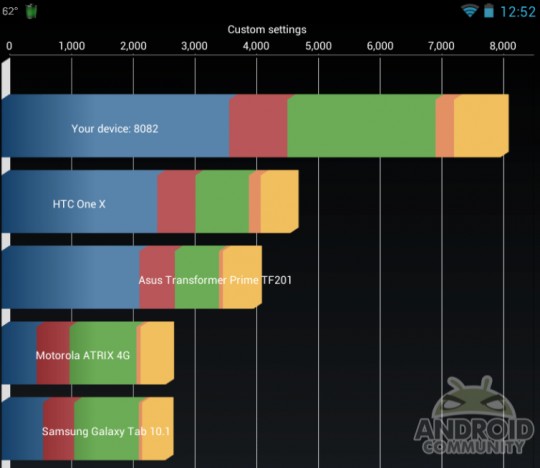