Nexus 4 gets teardown for repairability and science

If you’re not all about science, its time you turned right around – because the Nexus 4 being torn down by iFixit to see what LG has brought to the party is all about how much science they can pack in its innards. It begins with a note that the LG Nexus 4 (see our full review here) isn’t exactly made to be taken apart – not by the average citizen – but that if you do want to fix it up, you’ll probably be able to without too much trouble. It all begins with a couple T5 Torx screws and a prying of the back from the front.

The back of the device is a beastly amalgamation of components not often seen in a battery cover. Of course since it’s not technically just a battery cover, but half the device, not meant to be removed by just anyone, it makes a whole lot of sense. This half of the device has a set of pressure contacts that power the NFC antenna and connect to the induction coil needed for wireless charging to the motherboard. 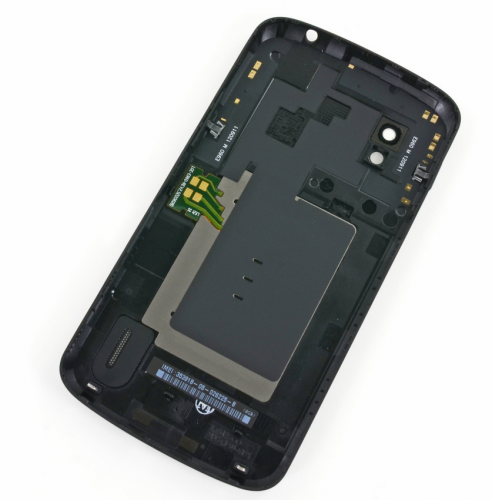 The battery sits in the front half of the device and is held down with a large amount of adhesive – not meant to be removed, ever. The folks at iFixit do remove the battery, but warn that you’ll not want to be a first-timer if you plan on making it work for yourself. The speaker enclosure, on the other hand, is held in place with two screws and no cables, working with spring contacts that make replacing it perfectly simple.

The back-facing camera is labeled as AC2AD D5A261, the motherboard contains Toshiba THGBM5G6A2JBA1R 8GB Flash and Samsung K3PE0E00A 2GB RAM. Imagine that – a big mix! For those of you that do not check the innards of your devices up-close very often, this isn’t out of the ordinary at all. It’s a team effort!

Also inside you’ll find a lovely Qualcomm WTR1605L Seven-Band 4G LTE chip. This does not mean that the device here is capable of working with a 4G LTE mobile network – it only means that, as you’ve seen with the LG Optimus G (with much of the same gear inside), Qualcomm’s setup is capable of 4G LTE where specified. We’ll see if this means that Verizon or AT&T will be running up with their own LG Nexus 4 with 4G LTE in the future – it’d require just a few hardware tweaks, and as we know from the Samsung Galaxy Nexus, it’s not out of the question that a carrier-based “Nexus” device would exist.