New WhatsApp bans mean you need to consider the risk

WhatsApp Temporarily Banned accounts popped up en masse this past week as the chat app continues its campaign to appear to fight unauthorized use. We’ve seen accounts of several accounts banned for what would – at first – appear to be shaky-ground reasoning. No problem, right? Not like your business depends on the use of a single app to survive… right?

What is WhatsApp up to?

We live in a complicated web of business, here in the year 2019. Businesses and networks and individual people depend on one-another for ultimate economic survival. Businesses around the world make use of social networks to reach consumers – one depends upon the other for ease in communication.

WhatsApp had some malicious or otherwise unsavory user invasion issues over the last few years. Any social app that’s distributed to as many phones as WhatsApp certainly runs that risk. Facebook came under higher scrutiny as result of their unprecedented privacy failures over the last few years as well – and since Facebook IS WhatsApp, they needed to make a more publicly apparent effort to combat evil.

WhatsApp banned you because of some other app

One of the several ways in which users and/or companies were notified of having been banned in recent weeks was with notice of a “Temporarily Banned Account.” This is due in a large part to use of 3rd-party apps. Some apps claim to work magic with WhatsApp accounts but actually break the WhatsApp terms of service, thereby getting you, the user, banned.

Especially that last one – apps that “claim to move your WhatsApp chats between phones” – is a bad one. According to a WhatsApp representative, these apps should not be used because they “can’t validate their security practices.” Also because they sometimes bypass other relatively new rules.

So you say your WhatsApp account was banned for no apparent reason whatsoever. That’s just awful, and I sympathize with your situation. I’ve not personally been banned from WhatsApp (I don’t actually use the app for anything other than checking on updates so that I may write about the state of the app for readers like yourself) – but I’ve been banned for no apparent reason from other major internet-based services in the past.

There are a whole lot of reasons why WhatsApp might’ve banned your account. While it’s not always possible to learn which of these rules WhatsApp thinks you broke, you can check the WhatsApp Legal Info / Terms of Service. It should be noted that those terms were last updated in 2016 – well before the last set of rules were sent by WhatsApp to the press, in the first first months of 2019 (different depending on your chosen news source’s home country).

And just in case every single person in the world refrained from reading the massive wall of text on that terms-of-service linked above, know the following. WhateApp use in the USA and Canada includes a “binding arbitration provision.” Except in “certain types of disputes” or if you “opt out”*, you agree that using WhatsApp means you can never take WhatsApp to court for (almost) any reason.

*To opt out of this bit, you’d need to notify WhatsApp in writing on an actual, physical piece of paper. This paper needs to be mailed to WhatsApp’s business address in Menlo Park, California. If you do not mail this opt-out to WhatsApp within 30 days of your first use of WhatsApp, you may no longer opt out.

UPDATE: To be extra super clear, the language for the opt-out includes the following, courtesy of WhatsApp: “To opt out, you must notify us in writing postmarked within 30 days of the later of: (i) the date that you first accepted our Terms; and (ii) the date you became subject to this arbitration provision.”

Look to one of WhatsApp’s latest Twitter updates to get an idea of the dynamics of WhatsApps’ business model right this minute. Europe-based business expansion for an app that’s meant to be a “simple, reliable, secure messaging app.” You needn’t go far to start seeing a mass of users (single users and businesses) seeking help for account bans. 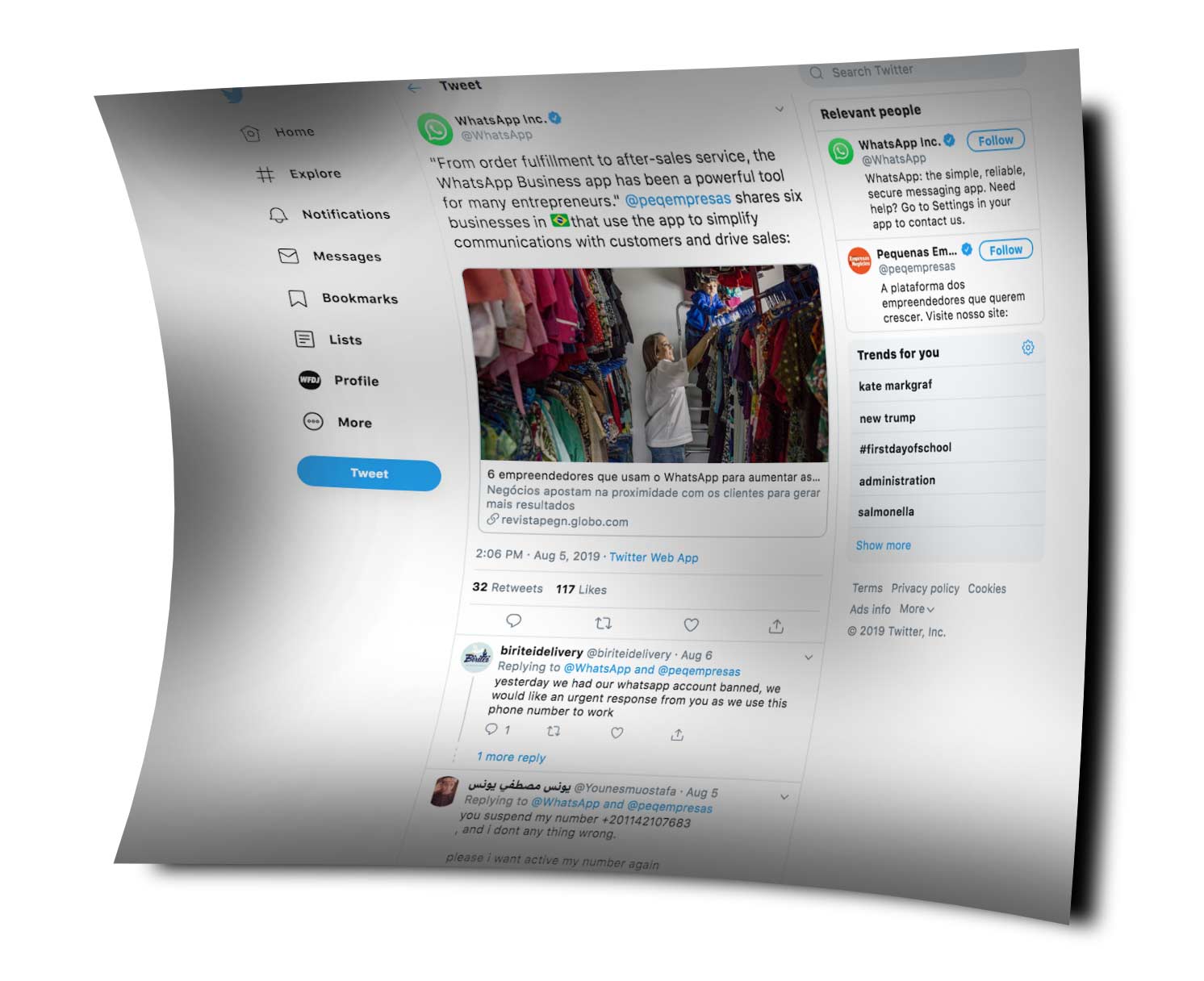 As of January of 2018, WhatsApp reportedly had around 300 million daily active users and 1.5 billion monthly active users. WhatsApp is consistently counted amongst the top 3/4 social media networks in the world, competing with Facebook, YouTube, and Messenger (also Facebook). It’s pretty large, user-wise, no matter which other way it’s cut.

It’s difficult to get a read on how many people actually work on the WhatsApp team at Facebook. The last public mention of this team was somewhere in the year 2015, when they had just 50 workers – and that was after acquisition by Facebook. They’ve obviously scaled in some ways in order to handle their user base. But at what point does it stop making sense for WhatsApp to provide individual tiny businesses and users with technical assistance?

It would seem that there comes a point in time in which a digital focused brand finds it reasonable to risk the loss of some small companies and individuals as they initiate automated measures for weeding out malicious entities. Once a company is big enough, the chances increase that providing technical assistance to individuals and small businesses that’ve been banned becomes less sensible than just forging forward without addressing the needs of the few, or the one.

Therein lies the balancing act you must address. Either as an individual or a small business, do you need the social network enough to take the risk of getting removed suddenly, perhaps without notice? Is using the network helpful enough that you’re willing to stake your reputation on the possibility that you’ll always have access?

This goes for almost any communications app too, really. What happens when your primary means of communication with a person suddenly stops working because you’ve been banned? Or because a server is down? Maybe it’s time to talk about backup plans!