As Nintendo pushes New Super Mario Bros 2 for the Nintendo 3DS and 3DS XL, they’re deciding that they need none other than actress Penelope Cruz to don the classic plumber outfit to make the game seem more attractive. The advertisement you’re about to see is lengthy, dry, and makes the title out to be just about as dumbed-down a video game can be, with jumping and coin-grabbing as the only two objectives the whole way through. In addition, the impossible nature of the storyline makes the whole spot fall undeniably flat.

If you’ve had your hand on the pulse of the Nintendo video game review universe, you know that New Super Mario Bros 2 is a massive chore in collecting coins. You collect so many coins by the end of the game that you’ll never, ever want to play a Mario game again. This advertisement informs us that these Cruz sisters have nothing better to do with their lives than compete against one another in a coin-collecting contest where the penalty for losing is heading to a market dressed as Mario or Luigi to pick up some mushrooms. 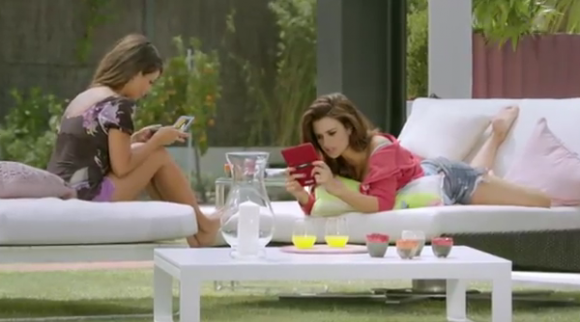 If you’re able to sit through the entire advertisement spot, you’ll get the bonus of seeing Penelope Cruz asking for mushrooms from a vendor on the street in what we must assume is supposed to be Italy. After over a minute of the two sisters playing the game with awesomely drab comments like “come on Mario, let’s go”, and “get the coins, get the coins, run, run run”, you get the reprieve of the Mario outfit.

Then it all gets ruined again by the camera dwelling on Penelope too long as she makes some uncomfortable hand gestures and mumbles. The whole thing feels like an unfinished product as Nintendo appears to struggle with a simple concept with well-known brand names. One star isn’t quite enough to entice when the execution on the video ad spot isn’t cut to completion – that’s for certain.