I sent back the iPad 2, but I’m keeping the new iPad. Two years ago I wrote my first iPad skeptic’s review, a more oblique – and personal – opinion on Apple’s tablet than the traditional SlashGear review. A year later I did the same for the iPad 2, finding it improved but, from a combination of hardware and software, not sufficient of an upgrade for my needs to justify keeping it. Now Apple is up to its third-generation tablet, criticized by some as another “minor” refresh but in fact a considerable step up in the overall user-experience.

When I wrote my first skeptic’s review, my Android tablet experience had been with the original Samsung Galaxy Tab, the 7-inch model running a smartphone version of the Google OS with some UI tweaks from Samsung itself. Since then, we’ve seen a rush of Honeycomb tablets and, within the past couple of months, some models running Ice Cream Sandwich too. The size range has exploded too, with everything from 7-inchers (if we discount the Galaxy Note as a large phone rather than a tiny tablet) through to 10.1.

Of them all, it’s the Galaxy Tab 10.1 I’ve spent most time with, running Android Honeycomb on NVIDIA’s Tegra 2 chipset. I’ve also lived with HP’s quickly-killed TouchPad after picking one up in the post-cull sales. With no iPad 2 on-hand, the Galaxy Tab 10.1 quickly became my go-to slate, its lighter build than the original iPad – albeit with less reassuring quality – and Flash support, not to mention its far better notifications system than the pre-iOS 5.0 pop-ups, saw the Apple tablet relegated to a shelf. 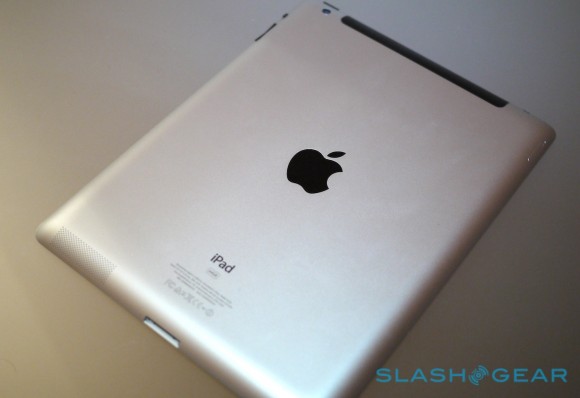 While it’s not fashionable to want Flash, there are still times when sites require it, and having to reach for a different device – whether laptop, Android phone or something else – to interrupt iPad browsing remains a frustration. HTML5 continues to gain traction, but Flash isn’t dead yet, especially on the desktop sites that are so very consumable on a tablet-scale display. Apple still aren’t showing any inclination to add Flash support to iOS, and Adobe has all but washed its hands of it for mobile devices, so the transition to HTML5 can’t come soon enough.

Along the way, Apple has addressed some of the more long-standing criticisms of the iPad, and inevitably gained a few new ones. iOS 5.x’s new notifications system, with its pull-down list of the latest alerts, fixes one of my lingering complaints around the previous two tablets. I miss being able to swipe them individually off the list – you can only dismiss an entire app’s category – as you can in Ice Cream Sandwich, but it’s a vast improvement on earlier iterations of iOS. If anything, though, I’d like to see Apple go further: right now it feels like the Notification slider only makes use of a small portion of the display and the lockscreen, whereas a full pane of alerts or two columns would certainly fit in with the Retina Display resolution.

Ah, the Retina Display. It’s hard to describe quite how slick the new iPad’s LCD screen is, though you grow used to the extra smoothness all too quickly. It’s only really when you shift back to a less pixel-dense display that recognizing the difference becomes conscious: going, say, from new to old iPad. Text looks jagged, icons and app graphics crunching and unappealing. Colors look more muted too, though brightness seems roughly the same. It’s easy to get caught up in whether Apple’s “Retina” branding is ocularly legitimate or not, but the takeaway is that I wouldn’t recommend anyone but the most casual of would-be iPad buyers to opt for the iPad 2, despite it being $100 cheaper. More apps are being upgraded to the higher resolution every day, and I think people will quickly come to rue that initial saving. 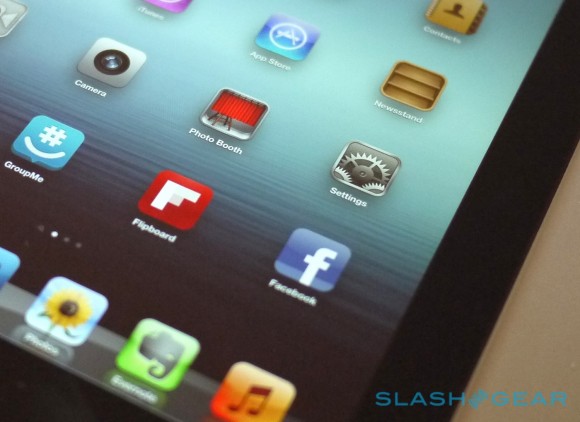 The other big change is 4G, though that’s little use outside of North America. LTE is still in the test phases in the UK, and even when the first networks go live the bands in use won’t be those supported by the new iPad’s modem. The best I can expect is DC-HSDPA, with its theoretical 42Mbps downloads, when select UK carriers begin to launch service over the summer. Today, with carrier Three, I’m seeing around 4.7Mbps downloads and 2.3Mbps uploads.

Still, avoiding LTE means I’ve also been spared what’s apparently the cataclysmic shock of 4G speed, and how fast an LTE-equipped device can chew through data. It’s hard to blame Apple or the new iPad for quite how readily a little prolonged 4G use can consume a data bundle, but the overpriced and comparatively small tariffs on offer to US customers are a different matter. When “rip-off Britain” can get 10GB of data a month for the equivalent of under $16, Verizon and AT&T have some explaining to do about their own limits.

My original iPad is WiFi-only, and that’s reduced its opportunities for travel. Faced with a journey, it’s my Kindle that gets space in the bag; that, and a sizable-screened smartphone – currently the Galaxy Nexus – that does for internet browsing, email and messaging. Still, the bigger screen and the inclusion of 3G means the new iPad has escaped the confines of the coffee table more frequently, and its upgraded specifications – most particularly the extra memory – means the frustrating browser crashes of the first-gen model haven’t been an issue.

Heat, too, hasn’t been an issue, despite some finding the new iPad runs significantly warmer than previous models. It’s actually a complaint that was leveled at the iPad 2 you might recall: at the time, it was criticized by some as a sign that this wasn’t some glassy slice of Apple magic, but had mundane electronics inside just like everything else on the market. Those electronics now include a significantly higher-capacity battery, and while I found my 3G use didn’t quite match Vincent’s two day experience, the new iPad certainly manages to get through 1.5 days of heavy use on a mixture of WiFi and 3G. 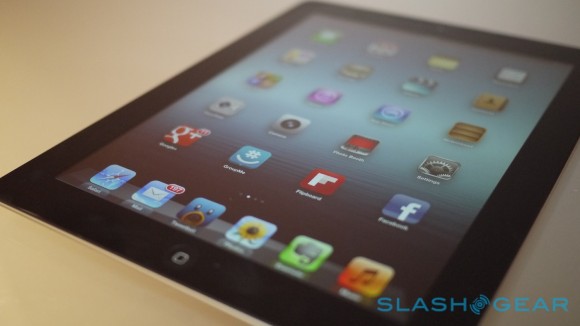 There’s no denying that, in comparison with previous models, the new iPad is warmer to the touch, particularly if you’ve been stressing the cellular connection or the GPU. Nonetheless, it’s never been unpleasantly hot, and if your iPad is toasting your fingertips then I’d recommend a trip to the Genius Bar to get the hardware checked out.

Apple has tried to make it clear that the new iPad is very much a content creation tool as well as a content consumption one. My hope to use the tablet as a mobile blogging platform is almost satisfied: the more stable browser means the full WordPress interface can be accessed (rather than messing with the still underwhelming app for the publishing platform) and though touchscreen text-entry remains a frustration for long-form writing, the iOS error-correction and autocomplete is some of the best around.

Multimedia has made significant advances too: I described the twin cameras on the iPad 2 as pitiful and dreary sops to spec-box bingo, but the 5-megapixel example on the new iPad is good enough for usable snaps and watchable video. Unfortunately the front-facing camera remains lower-res than the 720p-capable iSight webcams in Apple’s MacBook Air/Pro line-up, which is limiting during video calls.

[aquote]Being able to film, edit, process and upload video on the move is impressive[/aquote]

Still, armed with iPhoto and iMovie it’s possible – once you get past the embarrassment of holding up a tablet as a camera – to do things that would previously have demanded a separate camera and laptop. Being able to film an HD video clip, edit it, process it and upload it, all while on the move (and, as Vincent’s benchmarking suggested, with no real penalty in terms of exporting speed) is more than impressive, and when the new iPad’s own camera falls short, the Camera Connection Kit (which I bought for the original iPad but then never saw need to plug in) means pulling in even high-res photos from standalone shooters is a possibility.

Then there’s less businesslike content creation. I took the new iPad on a trip to see my family shortly after it arrived, snapped an album full of photos, and then – in less time than it took to take the train home – created an online journal of pictures and notes that delighted my parents. It’s perhaps easy to underestimate the value of that sort of tool, when we’re used to Flickr galleries and Google+ sharing, but for many it’s a whole new avenue of creativity and, essentially, a camera that lives up to the software’s potential. 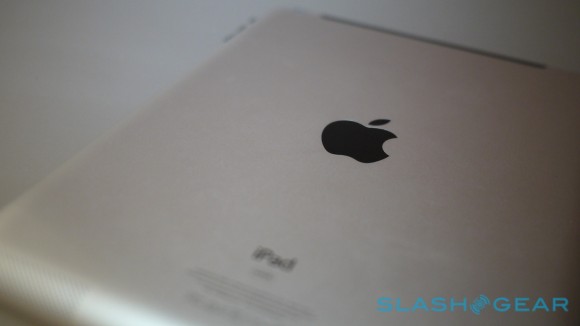 iOS is still not my favorite mobile platform. I miss the thumbnail previews of Ice Cream Sandwich, and webOS’ multitasking system still bests both Apple’s and Google’s. Android’s key tablet drawback remains apps, however: the selection of titles that actually make good use of 7- to 10-inch screens is pathetic in comparison to iPad-specific software. Although brand, style and specs all play into picking a new tablet, over time it’s the strength of the ecosystem that keeps you engaged. While the hardware and OS of new Android slates continues to interest me from a geek’s perspective, the paucity of apps beyond the out-of-the-box selection is a significant hurdle Google and its developers are yet to overcome.

That ecosystem is the new iPad’s biggest draw. The hardware feels, for the most part, like it’s settled; I’d expect Apple to tweak it in future iterations, yes, but the company has a tendency to polish its designs and then avoid change for its own sake. That’s certainly been the case in Apple’s computing lines, and the iPad looks to be following the same route. I’d like to see Google – and others, for that matter; Windows 8 certainly has its points of interest, particularly with ARM support for more frugal, multimedia-centric models – mount a more compelling offense, if only because I like Android and I think the competition is good for the end consumer, but there’s no doubting that, for a great proportion, the new iPad ticks most of the boxes. Upgrading from my first-gen iPad is a no-brainer; the problem for Google and others is that opting for an iPad is likely to remain a no-brainer for many new tableteers, yet to be convinced with what the rest of the market can deliver.

Looking for another opinion? Check out our launch-week new iPad review!