I didn’t intend to get an iPad. For a start, I’m in the UK, and – even before the recent news that Apple would be delaying the tablet’s international release – there’s no sign of them at my local Apple Store. Beyond that, though, while I could appreciate the design and the glowing feedback Vincent proffered from the iPad’s launch, it just didn’t seem like the device for me. And yet, when on Saturday April 3rd my US colleagues asked “would you like us to send you one?” I said yes. Since it arrived, around two weeks ago, I’ve gone through marvelling at the industrial design, puzzling over how to fit it into my daily routine, and finally – perhaps grudgingly – recognising its strengths (and, of course, its weaknesses).

A little context first: I’m a MacBook Pro user, though only as of midway through last year, having been a Windows guy before that. I used an iPhone 3G as my daily phone for about three months when it first came out, but much prefer Android and the Nexus One in my pocket currently. To be honest, despite the iPad hype I’m a little more curious about Tegra 2 based tablets, like Notion Ink’s Adam. 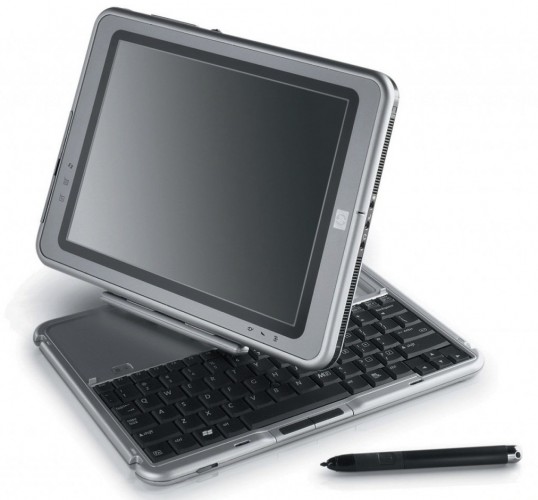 I’m also a bit of a tablet geek, and one of the things the iPad was inevitably going to get compared to in my brain was HP Compaq’s tc1100, the still-iconic tablet PC that I’m not alone in hoping the company refresh and relaunch someday. Okay, it ran Windows XP Tablet Edition (with its underrated handwriting recognition) and required a special stylus (and was pretty darn accurate as a result) but it was highly portable, surprisingly capable and had a brilliant twisting/folding QWERTY keyboard attachment that knocks Apple’s iPad Keyboard Dock into a cocked hat.

In contrast, my opinion of the iPad has been up and down. It’s undeniably attractive hardware – the smooth, brushed aluminum back and single glass fascia, together with the finely bezelled edges – and it feels futuristic in your hands in a way that a regular tablet PC seldom does. That’s perhaps because those regular tablets make accommodations for general use: they have USB ports, card readers and physical controls, whereas the iPad makes do with minimal connectivity and the fewest possible buttons and switches. If you’re sneering at me for getting so excited about hand-feel, remember that for Apple it’s half a technology purchase that they’re pushing and half a lifestyle one, and I’m not alone in wanting my new – undeniably inessential – toy to feel good.

The downside to those premium materials is that there’s a fair amount of heft to cope with. The first night I took the iPad to bed – for some Amazon Kindle app reading, after all it was only our first date – I soon gave up trying to hold up the tablet and reached for my Kindle instead; in contrast the dedicated ereader felt far more manageable, though also much less solid.  I was also a little afraid of dosing off and having the iPad drop on my face and break my nose. Rather than gripping the edge one-handed it can be easier sitting the iPad flat on your palm and typing with the other hand, though obviously that wouldn’t necessarily work when trying to read in bed, and it feels a little precarious too. A few people I’ve shown the tablet to have commented that it’s too slippery for their liking; everyone has been surprised by the weight. 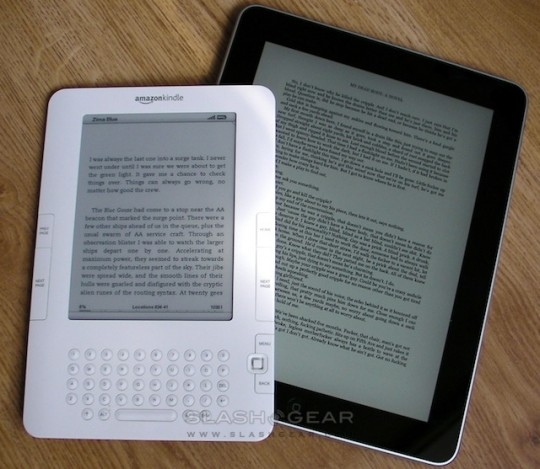 More worryingly, I wasn’t entirely happy with the way the iPad works. iPhone OS undoubtedly has its benefits – it’s highly consistent, relatively intuitive when it comes to navigation and control, and there are a wealth of third-party apps of course – but there are flaws too. Chief among these is the absence of multitasking – and it should be said that I’m talking from my own perspective here; your experience might vary. I don’t think I’m asking too much for wanting to browse the web while having Twitter and Spotify running in the background, something I can happily do on Android.

Some of this will be addressed by iPhone OS 4.0, which will bring with it multitasking support, but it’s still not perfect. While streaming music services like Spotify will still be able to do their thing, services like Twitter will still have to use iPhone OS’ attention-stealing pop up dialog boxes. If someone sends me an @-reply, and I’ve set it to flag those up, I’ll have a push-notification box interrupting my browsing and demanding I deal with it right there and then. It’s an ugly, half-hearted solution, and in comparison to OS X it feels incredible un-Apple. Ironically there’s plenty of space on the iPad’s top status bar to fit in “new message” icons, or Apple could borrow from Palm’s webOS and have a subtle slide-up message at the bottom of the screen.

There are some interesting solutions being pushed out by developers in the meantime, including various split screen browsers that let you log into Twitter’s mobile page (or Facebook, or something else) while browsing on the other half of the screen, but they’re still not ideal. Interestingly, I hadn’t quite realised how frustrating the standard Safari browser experience was until I tried Atomic Web [iTunes link], which throws in page tabs among other things and feels far more desktop-like. Meanwhile apps like Boxcar act as an intermediary to Twitter, Facebook and other social networking, RSS, and email accounts, popping up push notifications when you’ve been replied to or sent a direct message.

I’m not impressed at having to wait until fall 2010 for iPhone OS 4.0 to arrive on the iPad, potentially months after it makes its debut on the iPhone. If anything, it should be the other way round: doesn’t multitasking make more sense on a larger device, one about which you’re telling people they can leave their netbooks and notebooks at home and still do real work while mobile? There’s also a frustrating limitation on App Store access outside the US, at least for those not using US iTunes accounts. While you can browse and buy iPad apps through iTunes on the desktop (and then sync them across) you can’t sign into the App Store on the iPad itself with a non-US account. Hopefully that will change when the iPad officially launches in Europe, but of course that’s now been delayed until sometime in May.

Understandably, there’s been some interest among colleagues, friends and family about the iPad, especially with them being so scarce outside of the US, and that’s highlighted an interesting issue. Whereas the iPhone is considered a personal device, something you yourself use and are perhaps unlikely to hand around, the iPad feels more communal. Many have described it as a “coffee table tablet”, for instance, or described their children discovering how entertaining games can be and “borrowing” it for hours on end. Problem is, with no user account functionality and no way to individually lock-down access to specific applications, I’ve found myself hovering around people to make sure they don’t start digging through my email, say, or sending out tweets under my name from Twitterrific. If your iPad is a device the whole family can use, are you happy leaving your email signed in? As on the iPhone you can selectively limit access to Safari, iTunes, YouTube, installing apps and location through the general settings, but it would be good to see Apple add the same functionality for any software installed.

It probably sounds like I’ve been terribly disappointed with my iPad experience, but in fact I’m gradually finding more and more ways to integrate it into my life. The mistake, perhaps, was in immediately trying to find how I could directly replace my usual workday tools with the new tablet. The sort of multitasking I do as a matter of course while blogging – flipping from browser to twitter to RSS to IM and more – isn’t the best style of interacting with the iPad, and while you can certainly use it to prepare articles I’m still quicker on the MBP. However, the iPad comes into its own as a way of consuming content, whether that be reading or general browsing. The Atomic Web Browser makes the latter far more pleasurable, and I’ve been finding I much prefer to save longer articles to a “to read” notebook in Evernote on my laptop and then read them at leisure on the iPad later on. The 3.7-inch screen on my Nexus One feels awfully pokey now, and triaging email – with the exception of flagging messages, another bizarre omission on Apple’s part – is something I’m finding faster and easier on the iPad. It’s a device that’s encouraging me to have more downtime, reading longer articles rather than hopping frenetically from topic to topic. 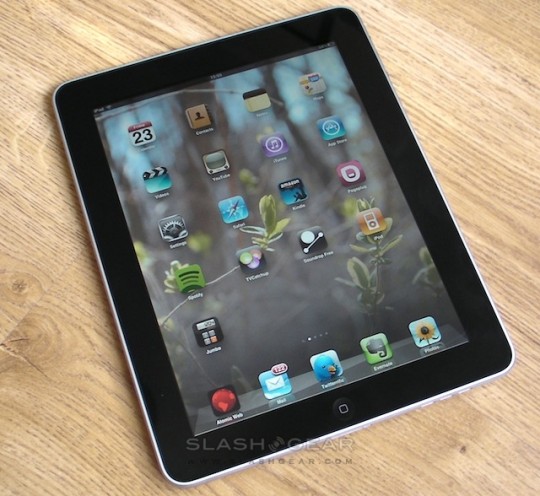 Maybe the biggest eye-opener is battery life, though. While Apple quote 10hrs of average use, in reality you can comfortably exceed that. The takeaway message is that you can use the iPad and basically ignore the battery gauge most of the time. I used the Kleer wireless setup I described earlier in the week to stream music while browsing the web for a few hours, and the battery percentage hardly dropped. Try that on the MBP and I’d be scurrying for the power cord in relatively short order, or at least perpetually, painfully aware of what the gauge was doing.

In a sense, it’s similar to the sudden realisation of freedom that you felt when moving from dial-up to DSL/cable internet, the knowledge that you could dip in and check something whenever you felt like it, rather than having to go through the hassle of dialling in for a connection. Alternatively, it’s like switching from metered to unlimited data on a cellphone: no more obsessively counting megabytes, just pick it up and do what you wanted to do. Power hungry that they are, that’s not even a feeling you get with today’s smartphones. Go in for some heavy browsing on the Nexus One, for instance, and soon it’ll want to sit in its dock for a mid-day top up.

The iPad is undoubtedly a luxury; it’s hard, in my experience, to argue that it adequately replaces a laptop unless you really are doing the most basic of content production. Typing out an article or editorial, yes, but formatting it in WordPress, uploading images and video, actually getting it to a stage where it’s ready for public consumption? With the tools available today, that’s beyond it. Most people will end up making compromises, though that’s not to say they won’t also get benefits along with it: battery life, intuitive browsing, fulsome media playback, just to name a few. If I hadn’t been offered an import, I’d probably have waited first until official units arrived in UK stores and then second until iPhone OS 4.0 arrives; even then, I might not have chosen the iPad over some of the Android-based tablets we’re waiting to see launch.

Still, it has already carved itself a niche in my day: I spend less time poking at my phone and less time out of work hours sat at my laptop. For someone whose online experience is less bi-directional – as I’ve already said this is a personal view; thanks to my job I spend more time than most putting things online rather than consuming them – I can definitely see how the iPad experience would be even more alluring. I wouldn’t go so far as to say “miraculous”, and my credit card is still waiting on the day some accessories manufacturer “borrows” the tc1100 keyboard design, but I’m not quite the iPad skeptic I started out as.

Looking for more on the Apple iPad?  Check out our sister site, EverythingiPad.com