Apple’s new iPad doesn’t arrive in stores for a week, but the queues are already starting to form outside the company’s flagship stores. SlashGear stumbled across Ali and Zohaib kicking off the line at Apple’s Regent Street store in London today, the first lonely iPad fanatics desperate to get their hands on the Retina Display toting tablet. 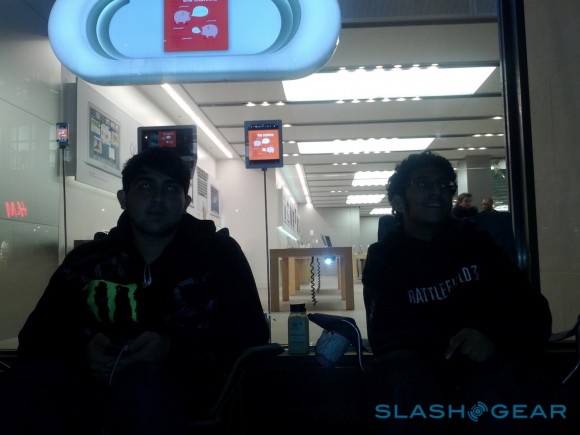 Of course, lines outside Apple stores in advance of high-profile products going on sale aren’t unusual, and in fact neither Ali nor Zohaib are new to this. Based on previous experience queuing they came prepared: folding chairs, plenty of warm clothes for the London weather, and a suitably fanatical love of iOS gadgets.

Queuing for a week may seem crazy to some, but it’s a potentially lucrative strategy if you’re not too keen on keeping an iPad for yourself. Even in the short time we spoke to the pair, a passer-by offered to buy their place for the coming Friday, at the cost of an iPad itself.

Meanwhile, pre-orders are already shipping – though are not expected to arrive until Friday, March 16 thanks to Apple’s usual regimented delivery policies – and if you didn’t stake your place in the online queue then you could have a wait ahead. Availability times have already slipped to the following week in the US, with European pre-orders now not expected to arrive until the end of the month. In short, if you want a third-gen iPad on release day, you may need to follow Ali and Zohaib’s lead.