An episode of Game of Thrones — already recognized as the world’s most pirated show — getting leaked online early isn’t exactly news anymore, especially after network HBO has taken great lengths to end such practices and only found partial success. However, in this case, where the latest episode of season six turned up online over 24 hours before its scheduled air date, it’s the fact that it was HBO that leaked it in the first place that’s interesting.

Turns out it was HBO Nordic, a European division of the network that’s available in Sweden, Denmark, Norway, and Finland. As TorrentFreak reports, it seems the streaming service accidentally posted episode five, The Door, on its website early.

As you’d expect, Game of Thrones viewers were quick to take notice, and from there it obviously didn’t take long for pirated copies of the episode to make their way to various torrent sites. Here’s a screencap of the show listed on HBO Nordic’s website, before it was taken down several hours later. 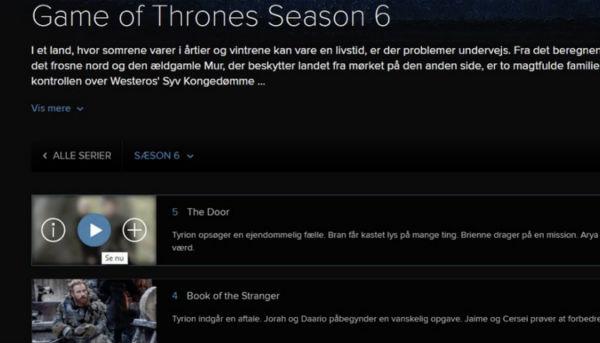 It’s probably a bit embarrassing for HBO that they were the source of the leak. Their tactics of combating Game of Thrones piracy have included simultaneous premiers around the globe, eliminating advance press screeners, and heavily promoting HBO Now, their stand-alone streaming service.

Unfortunately it looks like someone over at HBO Nordic might have flipped a switch a bit early. Hopefully it won’t cost them their job, they were probably just excited to watch the next episode.