Google is hoping you’ll like the new, second-generation Nest Hub enough that you’ll take it into the bedroom, with the third outing for its Soli sensor promising sleep tracking without anything on your wrist. Still $100, the new smart display aims to replace your old clock-radio and give some fresh insight into how restful your night was, though when the lights go out there are still some questions to be answered.

For 2021, the design has changed, subtly, with edge-to-edge glass across the same 7-inch, 1280 x 800 touchscreen. There’s now a new Mist (aka pale green) color alongside the Chalk, Charcoal, and Sand. Google uses more recycled plastic for the casing and fabric, too. 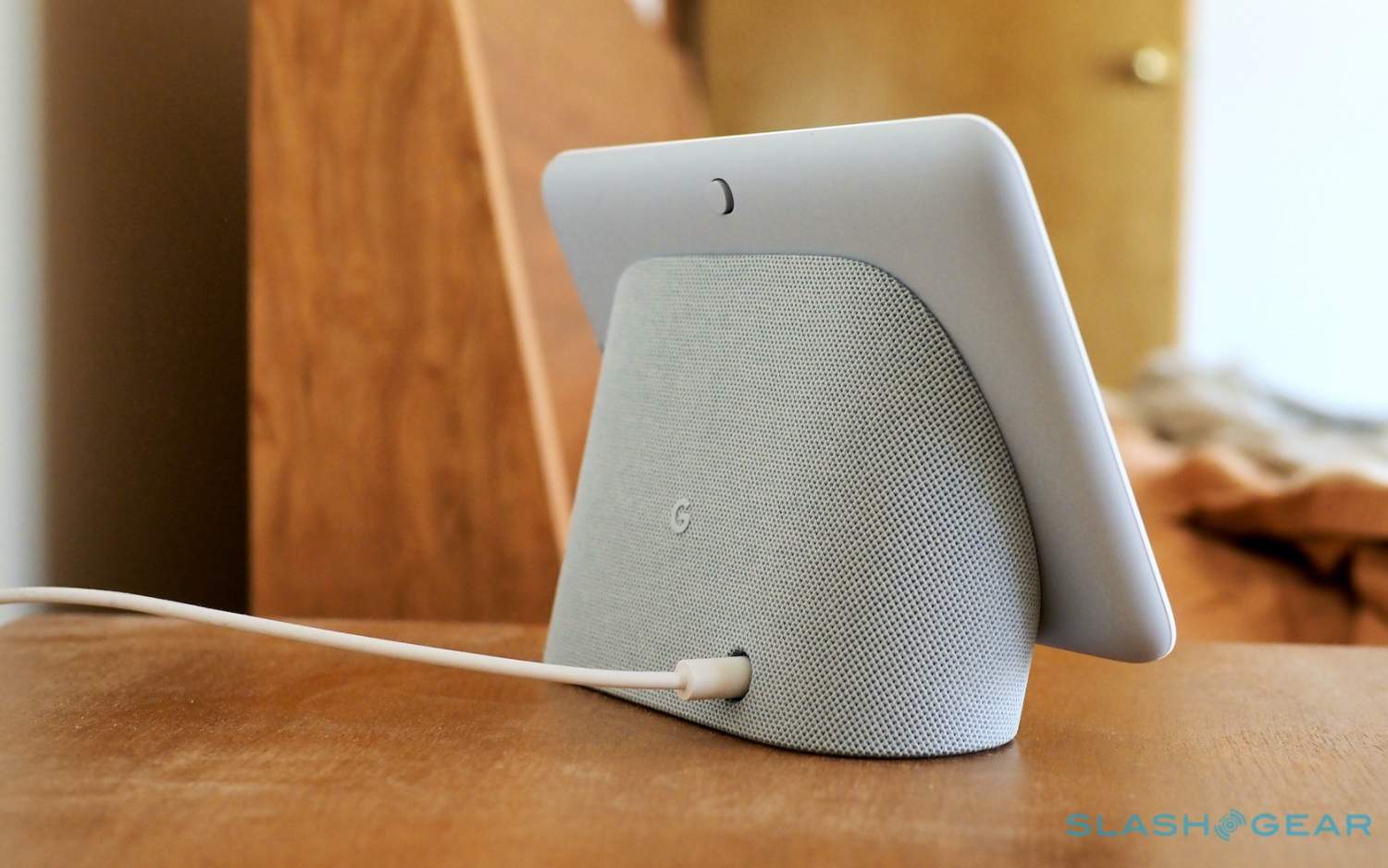 As before there’s a physical switch to turn off the microphones, and a volume rocker. Unlike the larger Nest Hub Max there’s still no camera; that, Nest argues, would make the smart display less welcome in bedrooms.

A fair number of people, it turns out, put their 1st Gen Nest Hub on their nightstand according to the company. With the addition of Sleep Sensing, the expectation is that the number there will only rise. That makes it all the more frustrating that there’s no USB port to charge your phone from.

Google’s Soli radar tech allowed you to control the Pixel 4 with waves and gestures, but it turned out nobody really wanted to do that. It makes much more sense in the 2nd Gen Nest Hub, where Nest can use it for sleep tracking without demanding you wear a smartwatch or install a tracking pad on top of your mattress. 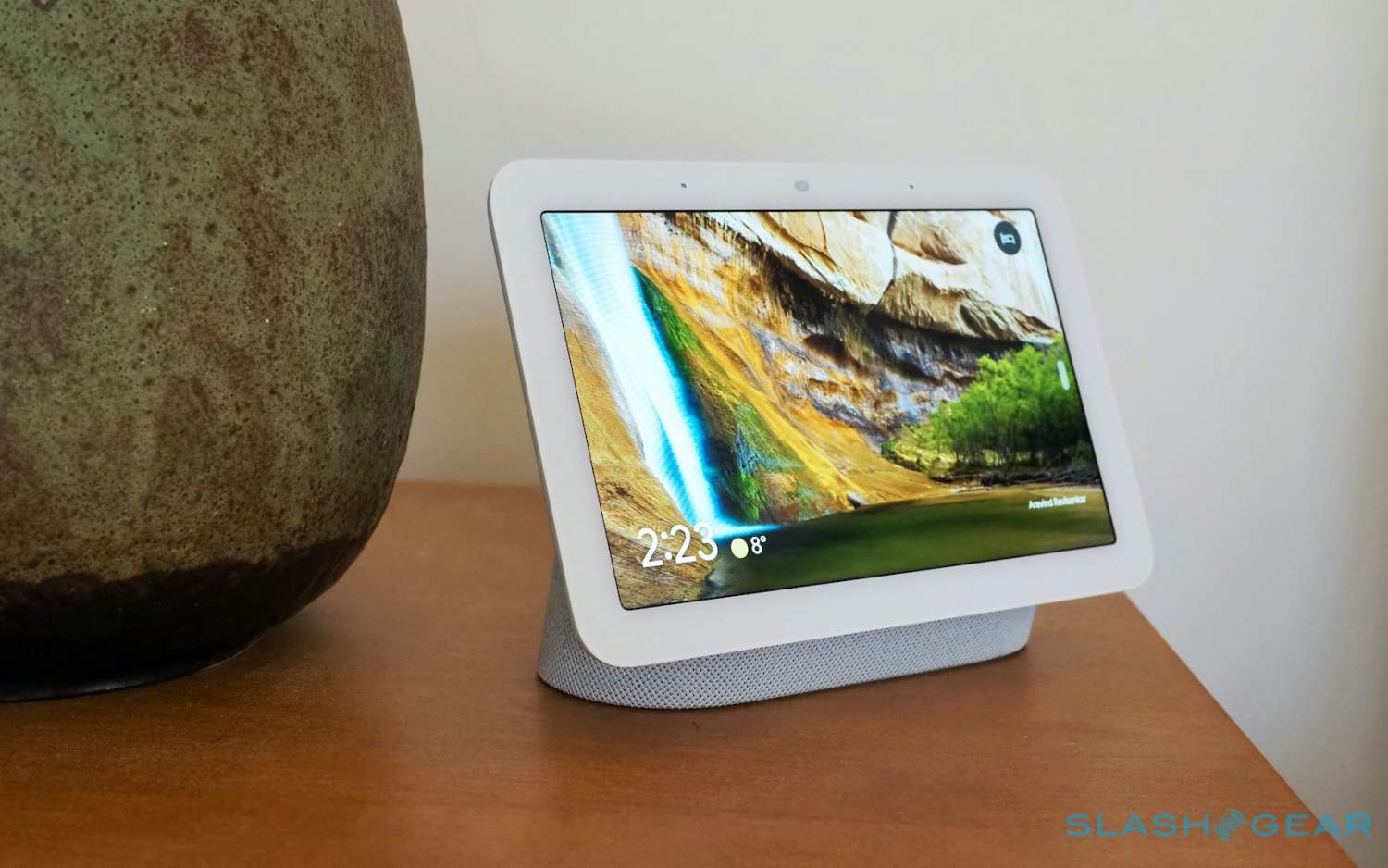 Like a fair number of people, I struggle to sleep when I’m wearing a watch or fitness band. While I like the idea of sleep metrics, then, the fact is that wearing something to collect them ironically makes it harder for me to sleep in the first place.

With Soli, though, the new Nest Hub can track you with zero-contact. Since it’s not a camera-based system, there’s no saucy photography of you in bed happening: the sensor tracks movement, but not what’s moving, and there are no personally-identifiable images. You can leave Sleep Sensing turned off, shut it off temporarily, or selectively delete each night of data retroactively, and the raw Soli data – plus metrics like room temperature and brightness – are processed on-device before the sleep event data is uploaded. 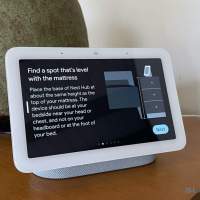 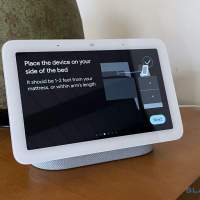 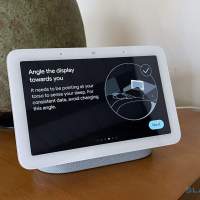 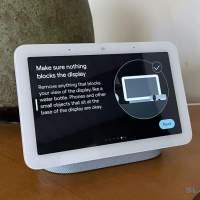 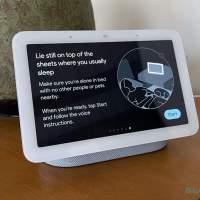 Setup is pretty easy; in fact the most time-consuming part was going through the process of granting approval for tracking the various metrics Sleep Sensing requires. After that, you position the Nest Hub on your nightstand, pointed at an angle to where you’ll be sleeping, and then lie down for a few seconds as it figures out where you are.

After that, Sleep Sensing automatically turns on when you – or anybody else, for that matter – sit or lie in that spot. A message saying it’s active flashes up on-screen briefly, and a persistent bed icon appears in the upper right corner. You can ask the Assistant to shut it off if you prefer. 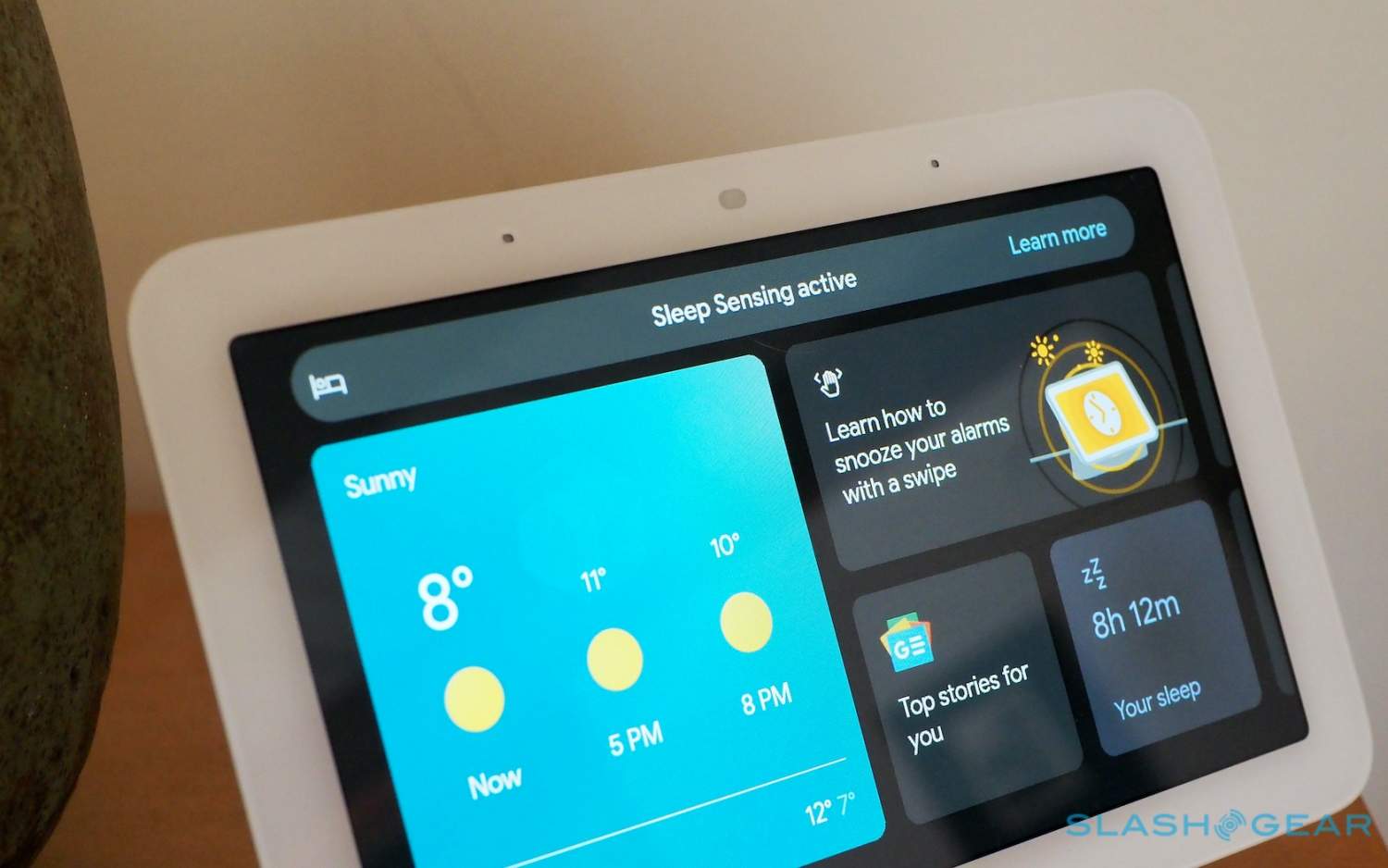 I liked being able to rely on Sleep Sensing automatically starting and ending tracking without any interaction. My partner is usually the first to bed, and so if I’d had to give a voice command to turn the system on that would’ve seen the Nest Hub quickly evicted from the bedroom. The downside is that it’s a little too easy to shift the roughly 20 ounce smart display around, either while you tap the touchscreen or just from nudging it as you set other things down on the nightstand next to it. Do that too often, and you’ll have to recalibrate.

Sleep Sensing works unexpectedly well, at least in terms of tracking time in bed and other factors. Obviously it’s tricky to make a note of every time you wake up and then drift back off to sleep again, but what I’ve remembered of surfacing in the night has generally matched the Nest Hub’s little chart of phases. 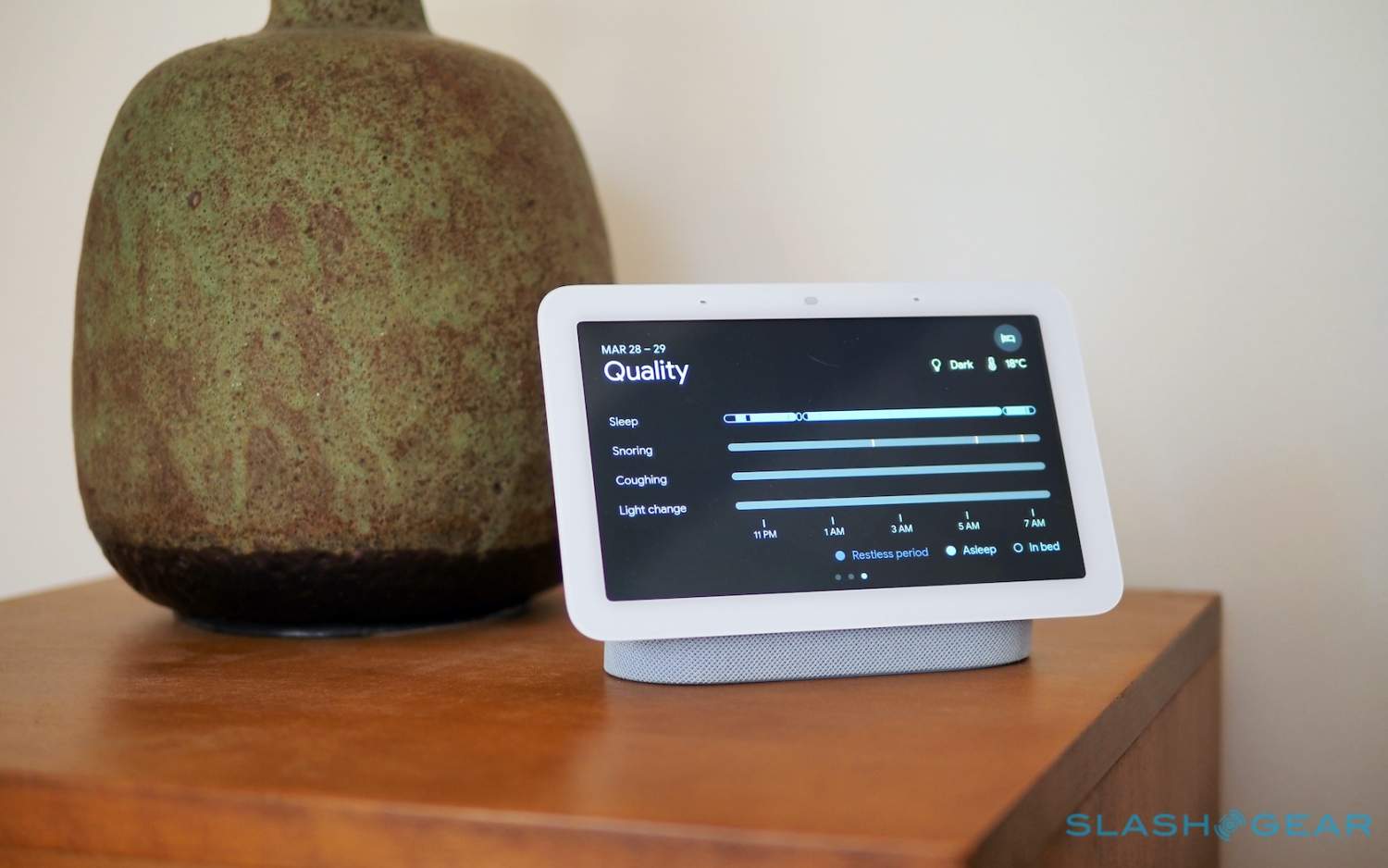 In the morning you can either ask the Nest Hub “how did I sleep?” or pull up the metrics in the Google Fit app. The results aren’t necessarily immediate: Sleep Sensing takes some processing time, and gives a grace period for you to go back to snoozing. If you check right after you wake up, therefore, you’ll find the results are incomplete.

When they do show up, you get a fair amount of data. The chart shows how long you were in bed, and for how much of that time you were asleep, plus an “efficiency” score relating the two. It also flags periods where you were restless or awake in the night, with a timeline of snoring, coughing, changes in room light level, and how your respiratory rate changed. 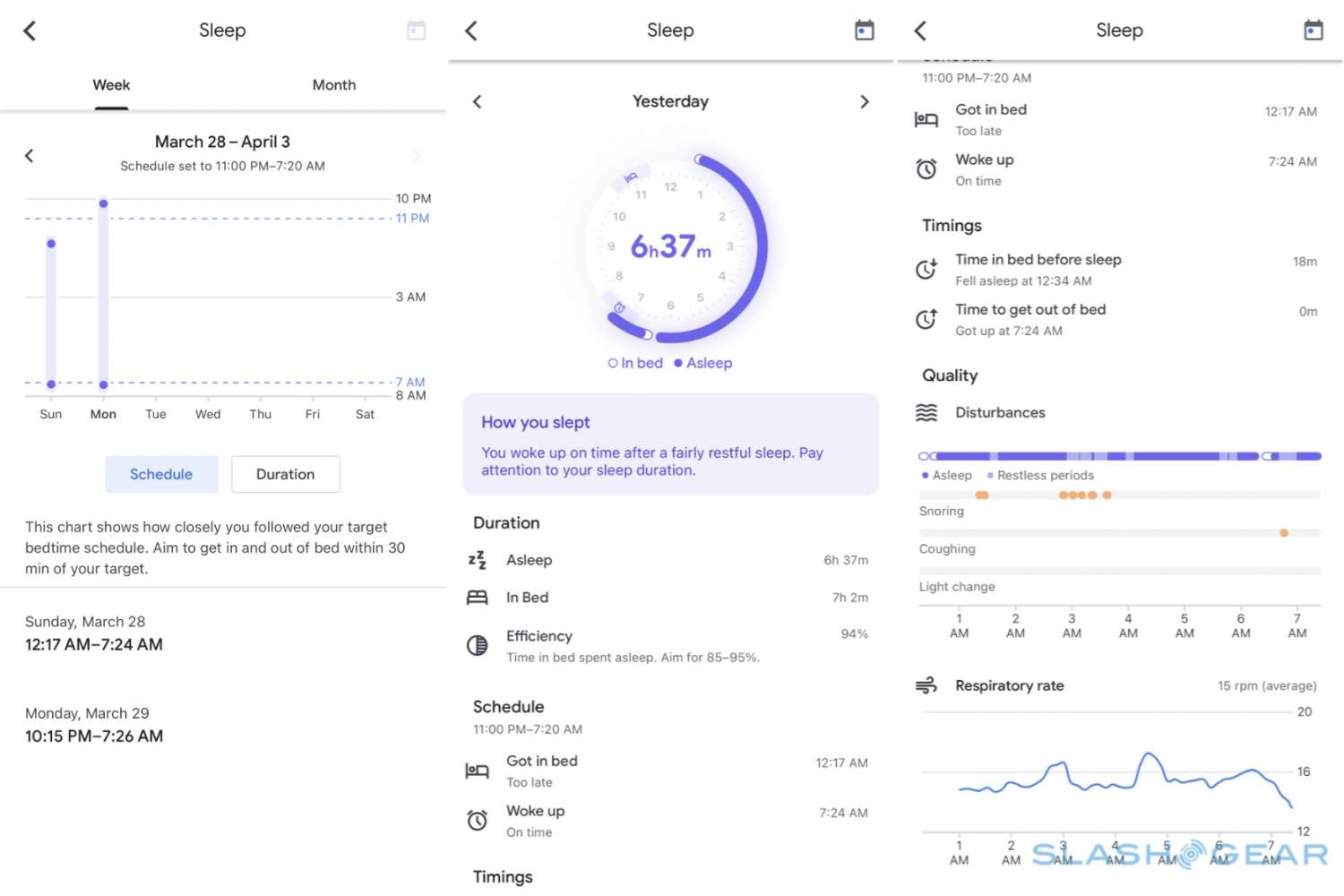 The core data is comprehensive, but what I find I disagree with more are Sleep Sensing’s conclusions. On a couple of nights this past week, for instance, I’ve been persistently disturbed by a sick cat, and got up in the morning feeling decidedly sleepy. The Nest Hub’s conclusion, though, was that I’d “had a fairly restful sleep” and that because I’d gone to bed and got up again roughly at the times I’d set initially, the length of sleep was “about right” too. That’s despite me waking up multiple times, which Sleep Sensing recorded.

Some of that might be down to the early stages of the system. Sleep Sensing will take into account the brightness and temperature levels of the room, plus noises like snoring, but though Soli can focus on your position in bed alone, the other metrics can be a little more vague. If it’s your bedmate who’s doing the snoring, for example, right now Nest Hub won’t necessary distinguish that.

There, perhaps, we arrive at some of the inherent limits of sleep tracking altogether. With fitness tracking, correcting things is a fairly easy process: if you’re not moving enough, start moving more. If you spend too much of the day sitting down, stand up more often. 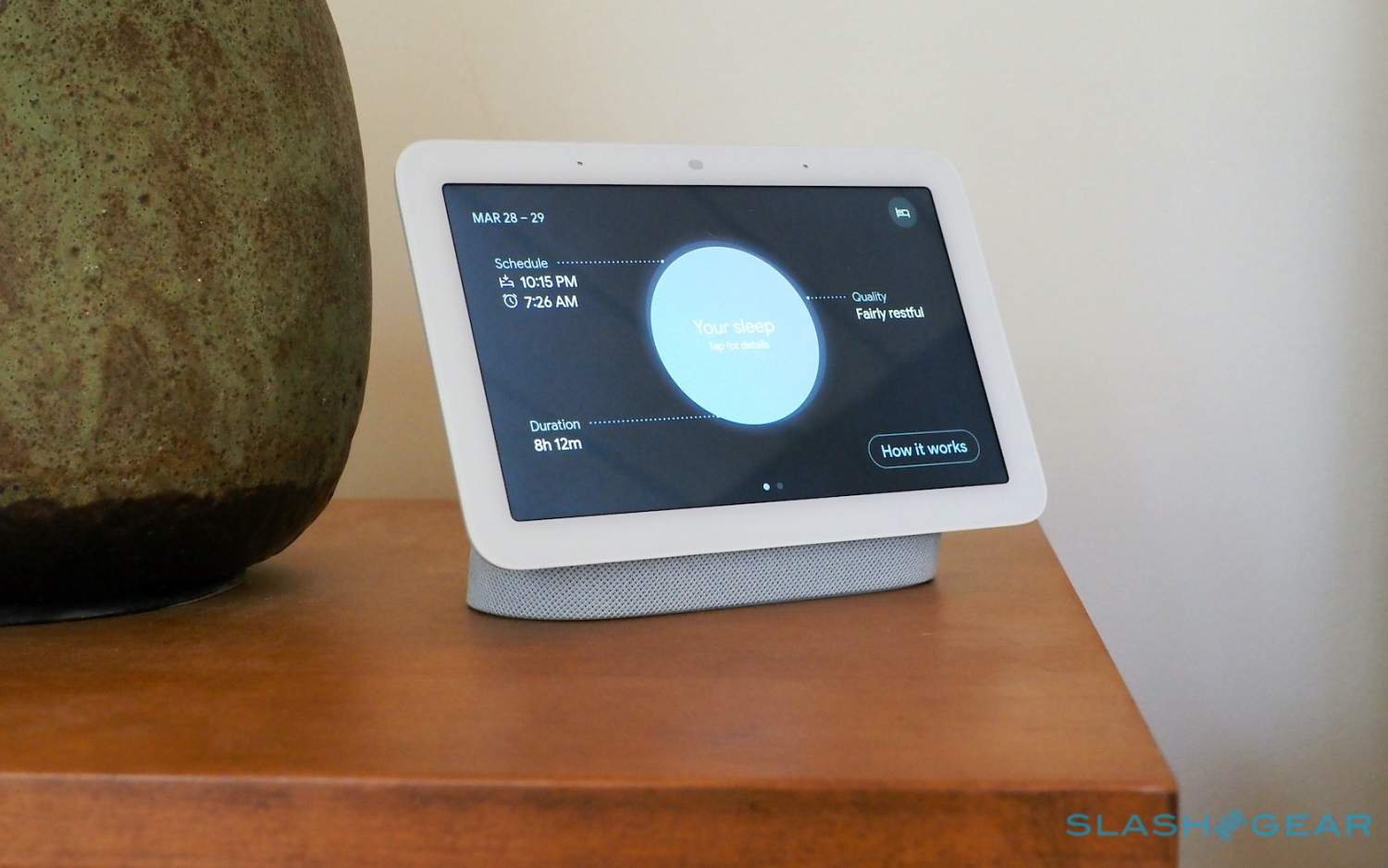 With sleep, though, it’s a little more nebulous. Sure, if the room is too warm or too cold, or you should’ve closed the curtains, that’s a relatively straightforward fix. So, too, is finding you’re not getting close to the 7-9 hours of sleep recommended for adults because you go to bed too late, or get up too early. After 14 days, Nest says, you’ll get suggestions on what your sleep schedule should be, and it’ll also add general tips and insights from various expert third-parties.

Beyond that, however, it’s a tougher challenge. Sleep Sensing can tell me if there’s snoring, but not whether I’m lying on my back, or my side, either of which might exacerbate it. It doesn’t know if I snuck in an extra double-espresso too late in the evening, or any of the other mental or physical reasons why the amount of rest I’m managing isn’t quite right. Just like an Apple Watch can congratulate me for hitting my calorie target, but not know if I also ate half a birthday cake, the tracking and the numbers can only go so far. 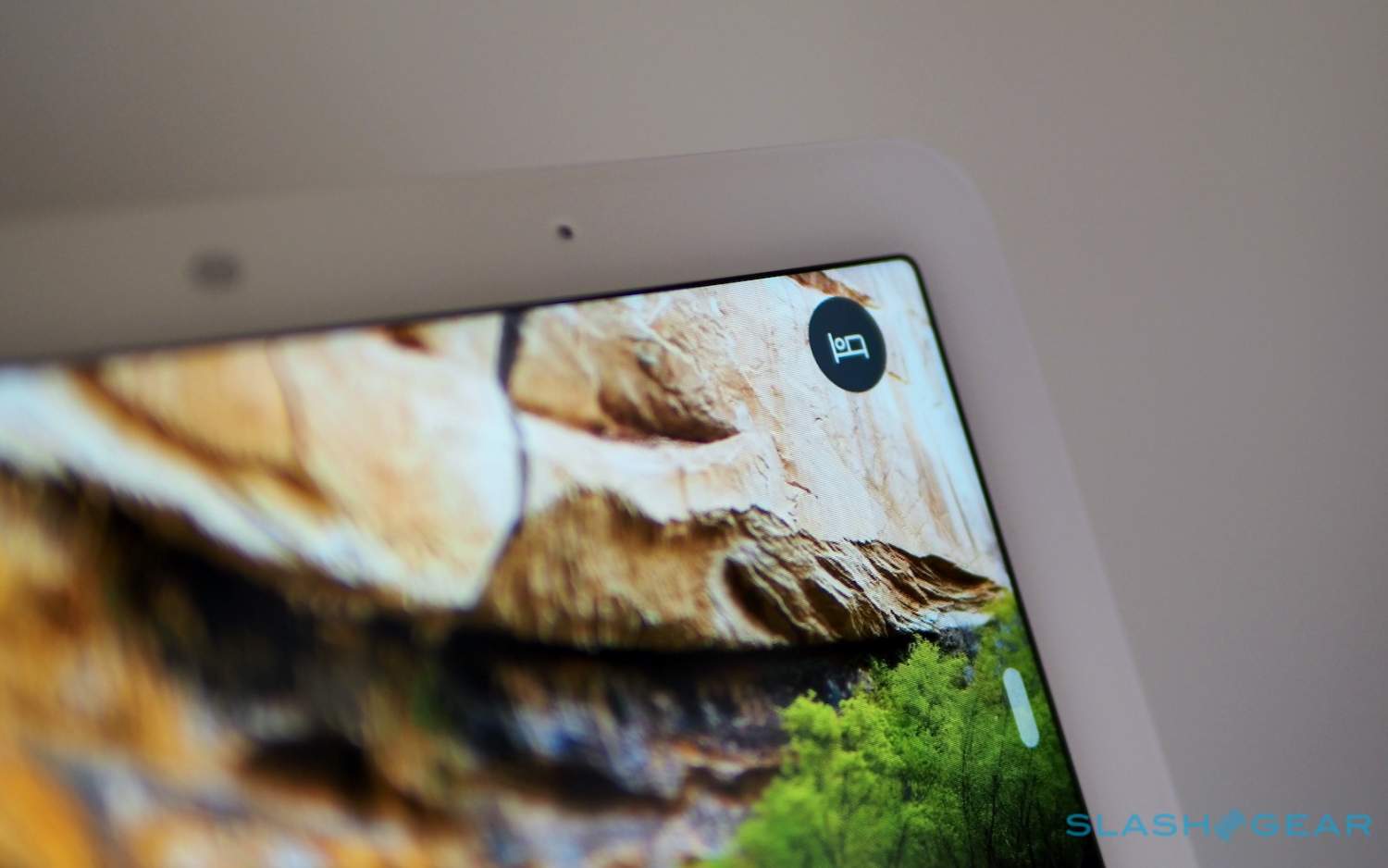 It means the metrics the Nest Hub gathers are interesting – to a point – and the way it gathers them is the least intrusive sleep tracking system I’ve tried, but they’re only going to be useful to you as part of an understanding of your sleep. The recommendations the smart display might make aren’t going to be the magic bullet for perfect rest each night: you’ll need to also apply some common-sense and context of your own. Whether Sleep Sensing’s part in that will be worth the eventual subscription fee that Google and Nest are planning – when they figure out how much, exactly, they want to charge for the functionality next year – remains to be seen.

Some of Nest’s other improvements in the 2nd-generation smart display you can take advantage of now, and others will be waiting for use later. Most noticeable is the improvement in bass performance, Nest tapping the speaker tech from the Nest Audio to give the Nest Hub a little more low-end oomph. No, you’re not going to out-perform a standalone speaker, but it definitely sounds more balanced now. 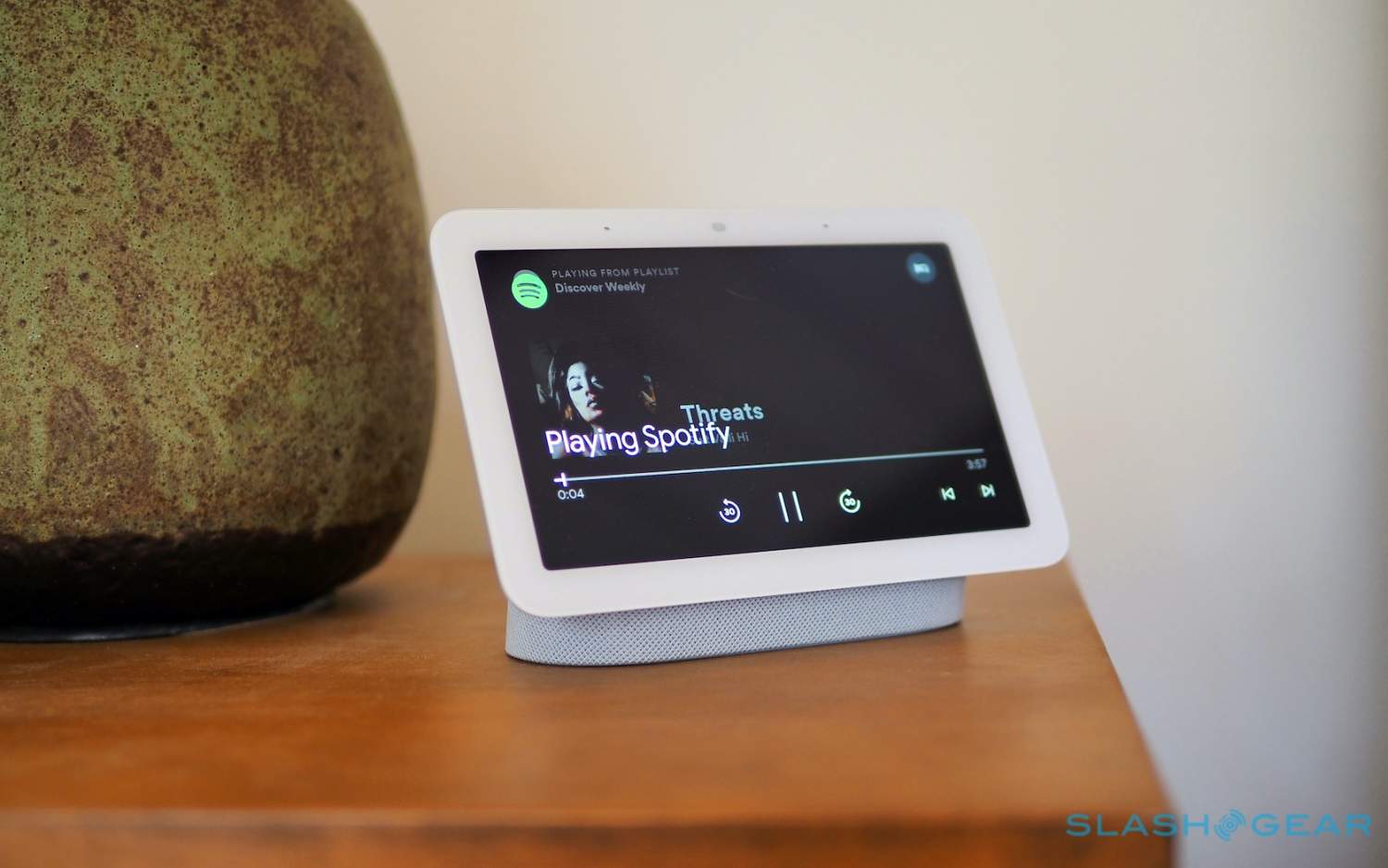 Soli-powered Motion Sense gestures can be used to control things like music playback or snooze alarms by waving your hand. There’s also a new machine learning chip inside – again, as in the Nest Audio – which does on-device processing of your most common Assistant commands. Day to day, Google’s AI does feel snappy and responsive; the addition of a third microphone might be helping there, too.

Still to be enabled, meanwhile, is a Thread radio. It’s intended to support the Project Connected Home over IP (CHIP) standard, basically another attempt to corral the smart home industry into some semblance of unified intercommunication and control. This time around, at least, it has the major players onboard: along with Google there’s Apple, Amazon, the Zigbee Alliance, and many manufacturers of IoT tech. 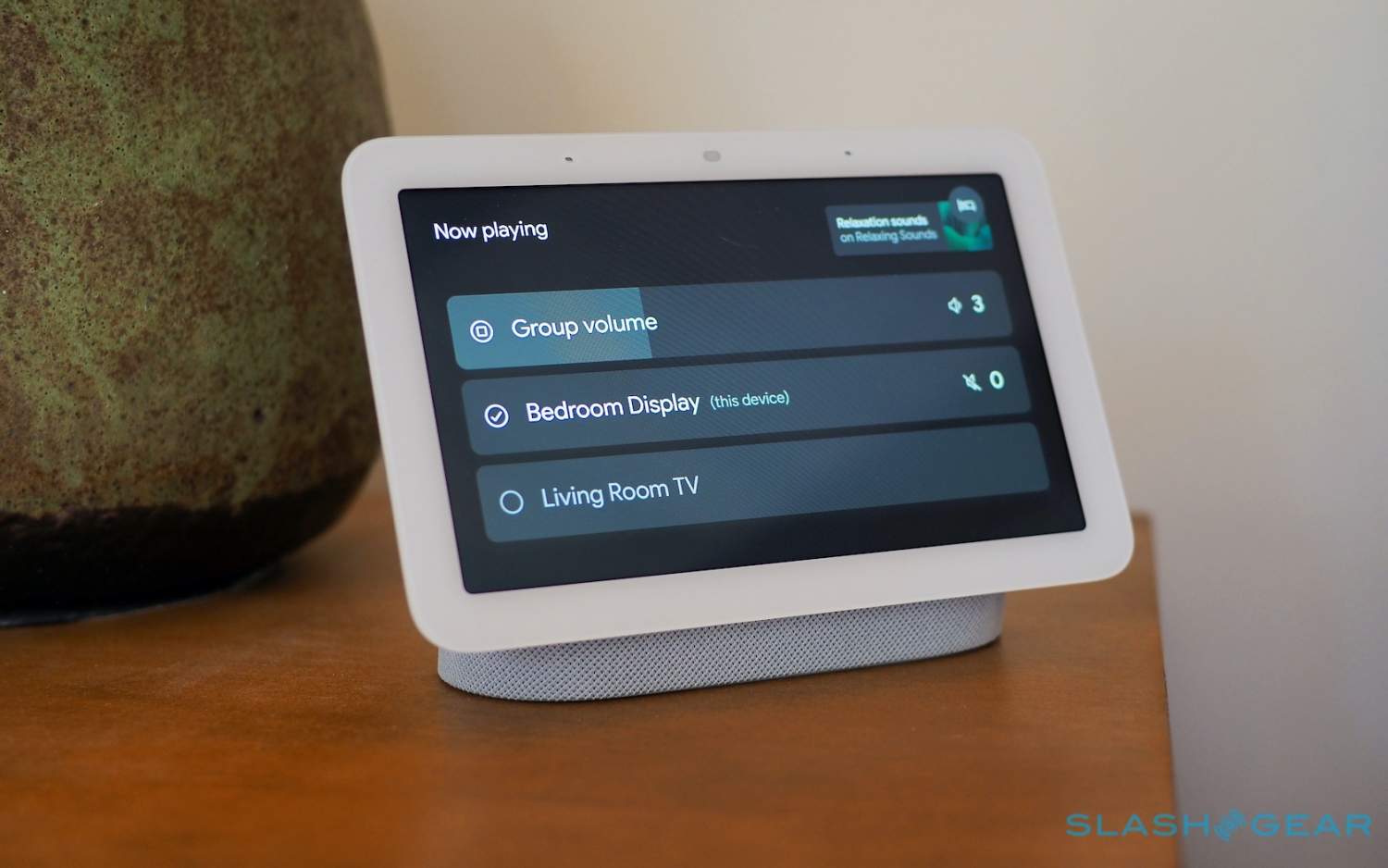 Exactly when that will pay dividends for Nest Hub owners, though, remains to be seen. For the moment, then, there’s the familiar smart home control panel, easily accessed to turn lights and such on and off through the touchscreen.

Honestly, the trickiest part of reviewing the new Nest Hub has been deciding where to put it. For Sleep Sensing, it obviously needs to be next to the bed; the problem there is that I don’t really need a full-functioned smart display on my nightstand. I can’t help but wonder if Google might’ve been better off making a standalone sleep-tracking sensor, because the rest of the display’s talents feel a little wasted. 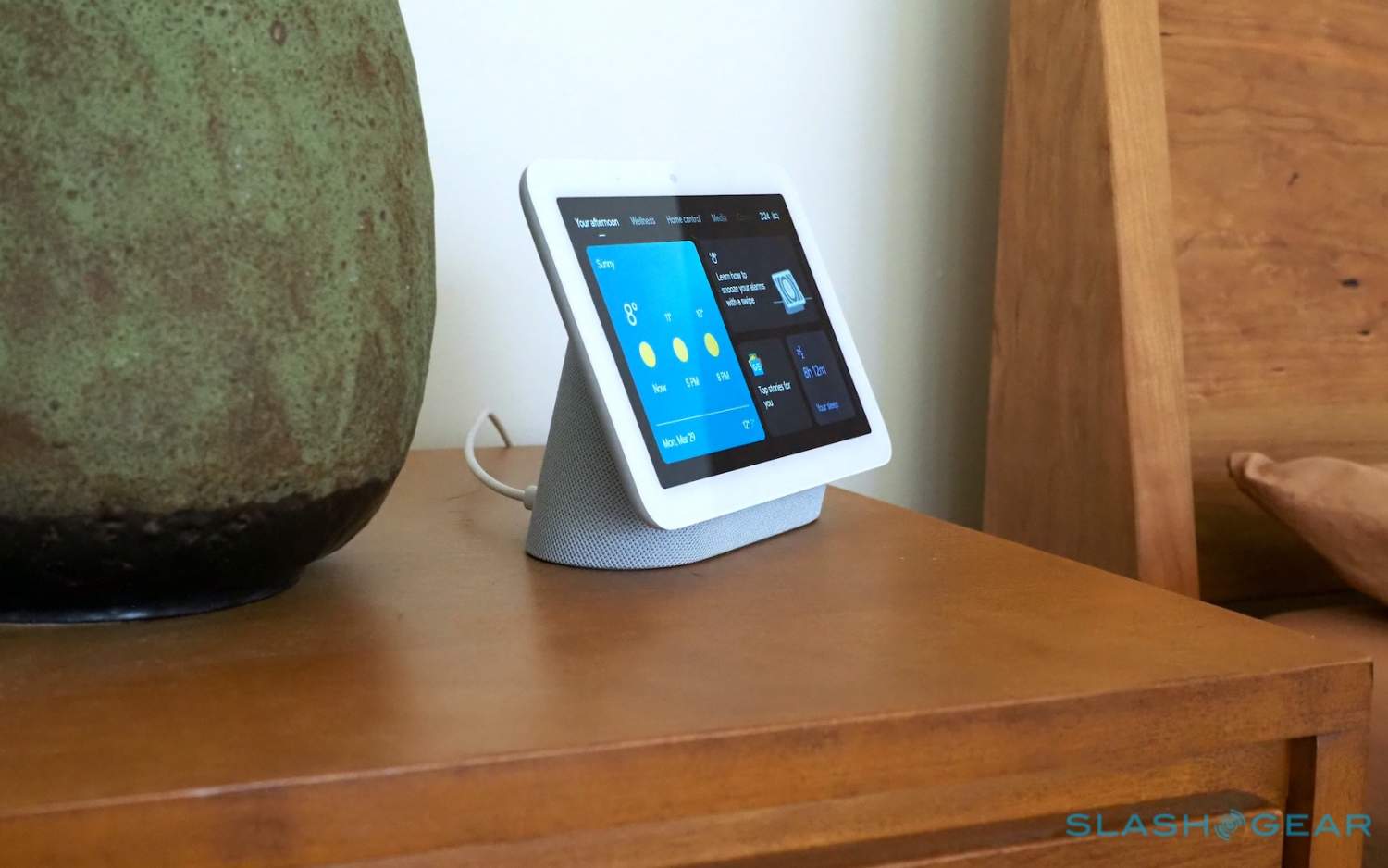 As for the results of that sleep tracking, certainly Soli feels fairly magical in how much it gleans from its remote perch. It’s been interesting, too, tapping through that data: if you’re on the “quantified self” train then it’s another set of intriguing numbers to gather. Where things feel less successful is in the depths of actually interpreting that data beyond the basics, and as it stands I’m not sure I’d pay a subscription for what Sleep Sensing is currently offering. Here’s hoping software upgrades can bring that part of the experience up to what the hardware delivers.

The rest of the 2nd Gen Nest Hub brings evolutionary refinements to its predecessor. It’s still competitively priced, now sounds better, works nicely as a digital photo frame with Google Photos integration, and if you’re a Google services user then the tight integration and snappy Assistant probably makes this the smart display to have. Sleep Sensing doesn’t make the new Nest Hub a must-buy, at least not yet, but its balance of features and price leave it still highly recommended whether it ends up in your bedroom or not.