Owners of Nest-owned Revolv smart home hubs will find their automation platform no longer works come May 15th, with the IoT box killed off in favor of Nest. Revolv was one of the earlier attempts at a multi-platform hub, aiming to join the dots between products from different companies rather than try to make every component itself, centralizing control in a single app.

The strategy included a radio-packed box with promised support for multiple different bands and technologies, although at launch – when we reviewed the Revolv hub – only a small handful were actually activated.

Still, it was enough to catch the attention of Nest, which by that point had been acquired by Google (and is now an Alphabet company), and which bought Revolv back in October 2014.

Sales of the teardrop-shaped Revolv hub ceased immediately, though owners were told that their service would continue even as the team responsible for the product refocussed on the “Works with Nest” platform, an ecosystem built around the Nest smart thermostat.

However, in the meantime, the decision was quietly made to kill off the Revolv hub and service altogether. 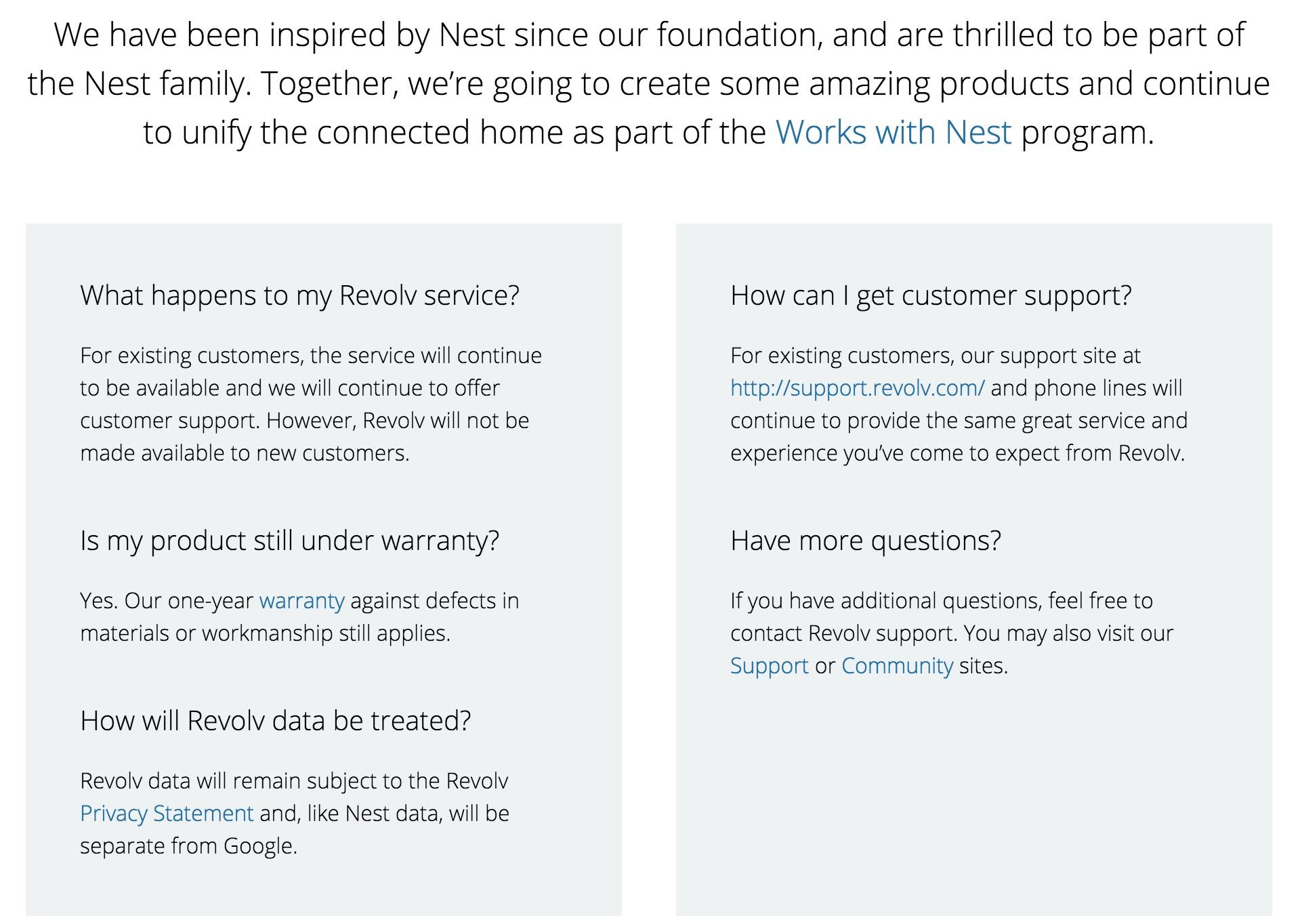 While the original statement from the Revolv team – screenshot above, courtesy of the internet archive – confirmed that “for existing customers, the service will continue to be available and we will continue to offer customer support,” a new version of the page now states that, as of May 15, both the hub and the companion app will be disabled.

“The Revolv app won’t open and the hub won’t work,” the page highlights, and any user data “will be deleted.” All Revolv hardware is now out of the one-year warranty originally offered. 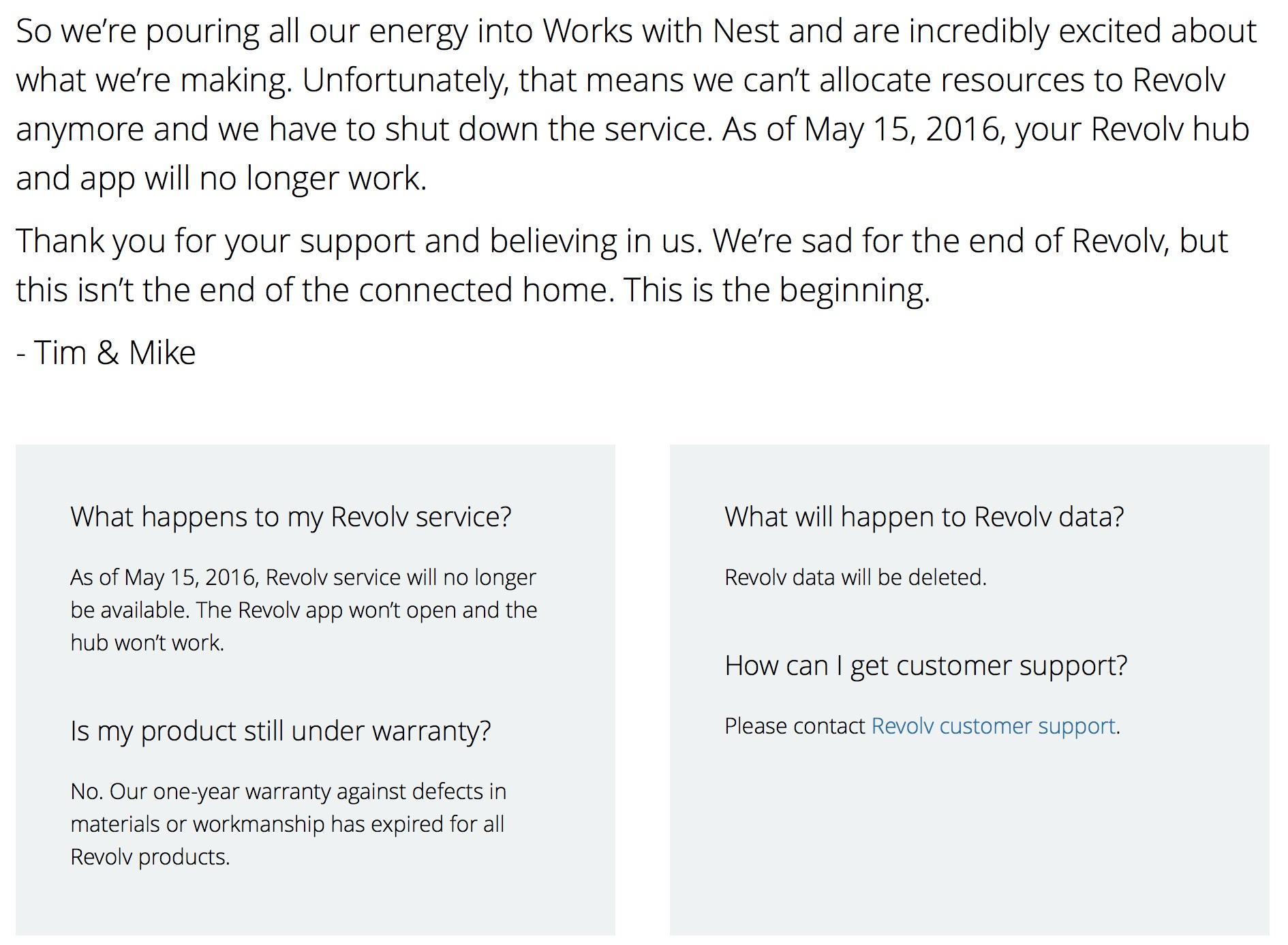 According to the internet archive’s periodic snapshots of the site, the change was made sometime between February 11 and February 29 of this year. However, Revolv user Arlo Gilbert claimed this weekend, owners were not informed of the change in terms.

“Revolv was a great first step toward the connected home,” Nest spokesperson Ivy Choi told SlashGear, “but we believe that Works with Nest is a better solution and are allocating resources toward that program.”

It’s not uncommon for the products of an acquired company to cease development or support as the new owners change direction; indeed, it’s arguably part of the “early-adopter tax” that those on the cutting edge face when they cough up for a device in a new segment, such the Internet of Things.

Nonetheless, Nest’s decision to not only cut support but completely deactivate the Revolv hardware and software is seen far less frequently. Although the focus may now be on building out Works with Nest, it’s difficult to imagine circumstances where current Revolv users will feel confident buying into a new ecosystem controlled by a team which so unexpectedly killed off their old platform.

Update: An Alphabet spokesperson clarified that Revolv was acquired by Nest, an Alphabet company, rather than by Google directly, as well as stating that Revolv customers were alerted in February 2016 that the hub would cease to operate in May. Despite having a registered Revolv, however, we did not receive such a notification.