NASA‘s Curiosity rover has snatched a scoop of Martian soil for analysis, the culmination of years of planning as the robotic explorer begins the hunt for evidence that life might once have been supported on the red planet. The new milestone followed two test scoops Curiosity slowly gathered and discarded as part of its preparation for soil testing, with the final sample being roughly as much as a crushed baby asprin and even now running through the rover’s onboard Chemistry and Mineralogy (CheMin) instrument.

“This instrument gives us a more definitive mineral-identifying method than ever before used on Mars: X-ray diffraction” project scientist John Gortzinger said of the CheMin tool. “Confidently identifying minerals is important because minerals record the environmental conditions under which they form.” 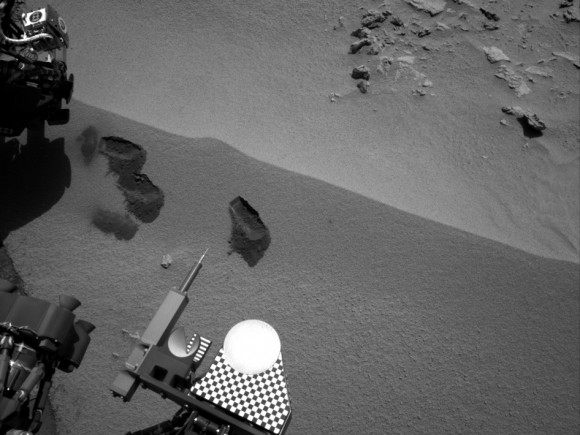 The NASA team responsible for Curiosity’s sample gathering equipment had feared that contamination of Earth dirt acquired during testing prior to the rover’s launch might confuse results when on Mars. Because of that, cleaning routines have been factored into the process: Curiosity picked up two prior scoopfuls, and shook them in the sample-processing chambers to remove any stowaway detritus. 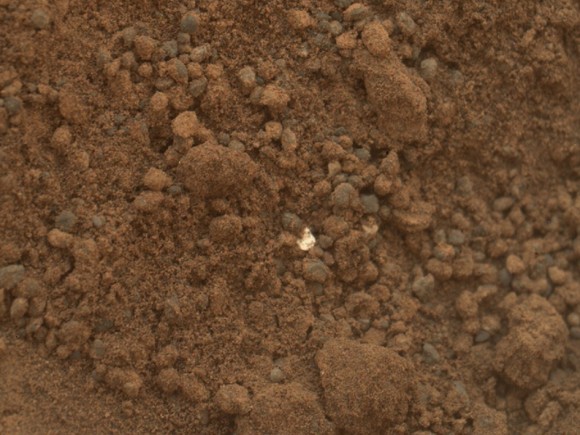 Despite all those precautions, there were fears that the process had been contaminated anyway when a glistening spec was spotted in one of the holes Curiosity dug on Mars. The sample itself was dumped, but subsequent examination of the photography – shown above – led scientists to conclude that the small, bright particle did indeed originate on the red planet.

The glimmering anomalies will now become the subject of inquires of their own, NASA says. “We plan to learn more both about the spacecraft material and about the smaller, bright particles,” Curiosity Project Manager Richard Cook said this week, describing them as “fodder for the mission’s scientific studies.”