NASA‘s Curiosity Mars rover scooped up its first sampling of soil from the Red Planet on Sunday, and it plans to sift through the soil vigorously in order to find out more information about the planet. The rover’s gathering and testing of the soil on Mars is an important part of its two-year mission to learn whether life ever existed or even currently exists on Mars.

However, while the rover was able to dig up some dirt, the exhaustive sampling and testing sessions had to be put on hold. The rover’s camera ended up spotting a small shiny object on the ground near the rover itself. NASA officials are saying it might just be a piece of plastic that fell off of the rover, but are not sure what it is exactly. 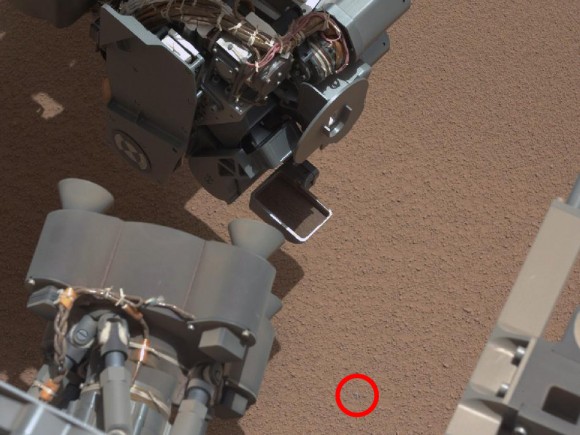 A closer look reveals that the object is merely just a very tiny piece of plastic wrap from the rover’s exterior — possibly a part of the outer insulation. However, NASA has confirmed that it’s pausing its dirt-scooping experiments until they figure out exactly what the small object might be.

The Curiosity Mars rover landed on the Red Planet on August 5 and is on a two-year, $2.5 billion mission to study whether microbial life could have existed on Mars in the past, or whether or not some kind of life currently exists on the planet. In two years’ time, we’ll hopefully have answers to those questions.