Once upon a time, you could have your cellphone in any color you liked, as long as it was black. Motorola wants to change all that with the Moto X, offering the new smartphone not only in black and white versions, but in multiple color finishes and even wood. At the heart of it is Moto Maker, a new online customization service that pairs US assembly with a big range of different shell options.

The Moto X casing is made of two components, front and back, and each is offered in different colors. There are two front panels – black or white – integrated with the 4.7-inch 720p display, and then eighteen back colors ranging from subtle geeys or dark blues, through to vivid pinks and greens.

Finally, there are seven different accent colors to choose from. The Moto X can also be printed with a custom message – your name, perhaps, or something to mark a birthday or anniversary if the phone is to be given as a gift – though that’s optional.

Altogether, there are 252 different color combinations for the hardware, before you get to custom messages. Then, you get a choice from sixteen different wallpapers exclusive to the Moto X, and the option to have a custom message show up when you power on the phone. You can also have the phone set up to your own Google account in advance.

Made in the USA

Like just about every major electronics product, the Moto X is built outside of the US. However, the final assembly takes place in Fort Worth, Texas, where Motorola tells us it has a team of around 2,000 working on piecing together the custom color orders.

That makes for a fast turnaround. In fact, Motorola says that Moto X orders through Moto Maker should ship out in four days or less. Those who want more immediate gratification – or from a network that’s not AT&T – will be able to pick up an all-black or all-white model in-store. 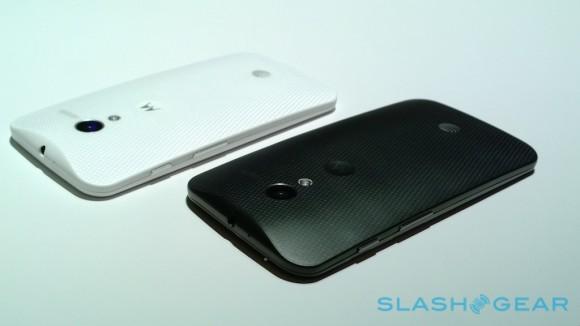 252 combinations is just the start. Motorola has been experimenting with other finishes, including other materials, for the Moto X. Sometime around Q4 the company expects to have a wood body available – it’s ready in prototype form now, but the company is currently testing various types of wood to see which gives the best results.

Motorola will be using Facebook polls to decide which new finishes should be added to Moto Maker first, and the company tells us that since its R&D team is local, it can react more quickly to new suggestions. It’s worth noting that the front and back panels aren’t intended to be user-interchangeable, so make sure you pick a combination you can live with. There’s a 14-day return policy, however, after you receive your order.

Motorola plans to eventually offer the customization service across all carriers supporting the Moto X. Initially, though, Moto Maker will be an AT&T exclusive in the US; the other four carriers will only offer the Moto X in black or white.