Motorola is back, and the Moto X is its coming out party. The culmination of Google’s new hand on the wheel, the “context aware” smartphone promises to step away from the core-chasing that plagues Android today, and instead deliver real usability improvements like entirely voice-activated Google Now, a camera with better low-light performance that doesn’t sacrifice megapixels along the way, and the promise of all-day battery life. Google has had a year to work with Motorola for this relaunch: the Moto X is the fruit of that labor, and it’s already tasting mighty fine. Read on for our first-impressions as to why the Moto X is a mobile game-changer.

The result has been a benchmarking race that doesn’t really benefit users or app developers, battery life that’s lucky to last through a day, and vast phones that often demand two hands for comfortable use. 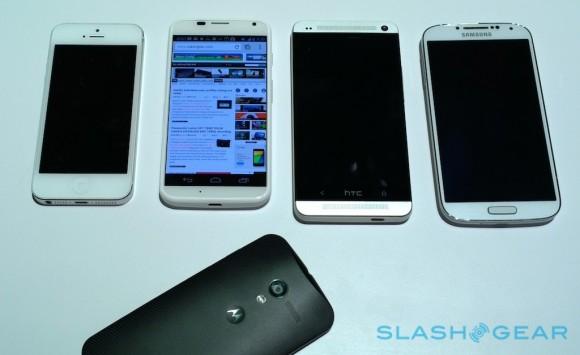 From the current perspective, the relatively humble specifications of the Moto X don’t look all that competitive. It has a 4.7-inch display, like the HTC One, but runs at 720p rather than 1080p. It has a Snapdragon S4 Pro processor, like the Nexus 4, but a 1.7GHz dualcore rather than a quadcore. Its non-removable battery is just 2,200 mAh, whereas Samsung’s Galaxy S 4 has a 2,600 mAh pack you can swap out yourself.

Motorola’s argument is that you don’t need superlatives if everything works together properly, and even from our limited time with the phone that’s already looking to be true. The Moto X doesn’t have a custom chipset, as you’d find in the iPhone 5, but its “Motorola X8 Mobile Computing System” does software-optimize the combination of a 1.7GHz dualcore Snadragon “Krait” processor, quadcore Adreno 320 graphics, and two custom chips of the company’s own creation.

These – a “natural language processor” and a “contextual computing processor” – handle the Moto X’s key features of touchless voice control and reacting naturally to the environment the smartphone is used in. Motorola argues that, by relying on specific silicon for both functions rather than software, the Moto X is more frugal with its battery; there’s a similar argument for the decision to go dualcore, rather than chase the crowd with quadcore chips. If you don’t need four power-hungry cores, Motorola says, why bother including them, their bulk, heat output, and power demands?

All that would be for nothing if the Moto X was sluggish or prone to lag. Happily, that’s not the case: stock Android runs smoothly and hiccup free, though we wish Motorola had gone with the latest 4.3 rather than 4.2.2 (though visible differences to the user are minimal). Motorola has followed the trend in specs in places where it makes sense, too, such as including 2GB of memory, which certainly helps.

Motorola tells us that its polls of potential users identified 4.7-inches as the optimal screen size they wanted to carry, just like the bowed back of the Moto X was designed to fit the curve of their hand (as well as accommodate the custom-shaped, stacked battery which is 31-percent bigger than if Motorola had gone with an off-the-shelf option). Though it’s lower resolution than the HTC One – 1280 x 720 versus 1920 x 1020 – it’s an excellent panel and with 312ppi pixel density it’s tough to notice any difference in clarity. 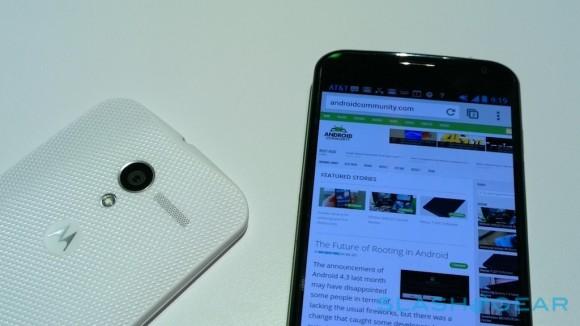 By opting for AMOLED – with an RGB sub-pixel design, rather than the dreaded pentile often found on Samsung phones – it also means the Moto X can selectively power up only portions of the screen for its Active Display feature. The pixels not lit aren’t drawing any power; we particularly like the way new notifications pulse in and out organically, and how the time flashes up when you give the phone a nudge. It shouldn’t happen when you can’t see it, either, as Motorola sensibly disables it when the Moto X is placed screen-down or in a pocket or bag.

In fact, clever little tweaks are all over the Moto X experience. The DuPont Kevlar back with a soft-touch coating seems durable and, while not metal, still manages to feel premium in your hand rather than slippery, and the Motorola Connect feature hooks up the Moto X to the Chrome browser on your desktop, meaning you can see notifications of incoming calls and texts, and reply to the latter using your regular keyboard. Motorola’s Trusted Devices feature bypasses the PIN-lock when the Moto X is paired to a specific Bluetooth accessory, such as a headset or your car’s head-unit. 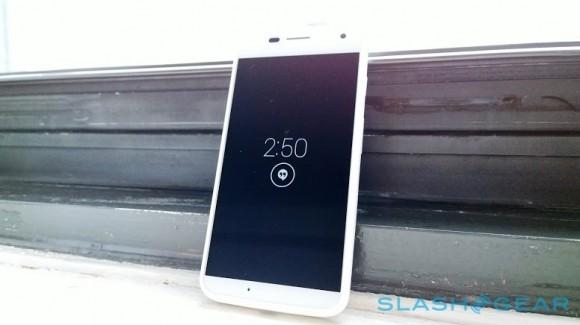 Haptics – the way the phone vibrates when you tap the display – has been around for a long time, but the Moto X raises the bar with a new, more localized system. For once it actually feels like the phone is buzzing exactly where your finger makes contact. Inside, Motorola has used a new water-repellent treatment for the circuit boards that means water should run straight off them, though the company isn’t describing the Moto X as waterproof.

The headline feature, of course, is how Google Now has been shifted to the forefront of the Android experience. Google has been pushing its “context engine” for some time now, but the Moto X gives it star placement. Now, you don’t even have to swipe the home button to summon the Google Now cards: instead, when the phone is in standby with the screen off, you simply say “OK Google Now” and your request.

To be fair, there’s a little prep work to be done before that all works. The Moto X runs through a three-stage training program when you first enable Touchless Control, so that the phone only recognizes your voice rather than the commands of other people around you. Once that’s done, though, you can call out to the Moto X across your desk – range is an estimated fifteen feet using the tri-microphone noise-canceling array, though we found that was very much dependent on what was happening around us – and have the phone respond without laying a finger on it.

That’s the theory, anyway. In practice, there’s a balance between device security and Google Now immediacy. If you have a PIN or password set up, most features – asking for navigation directions, to send a message, or to set a reminder, for instance – will make you punch that in manually before they work. You can optionally set the Moto X to allow calls to be made without unlocking first, but that’s about it.

Admittedly, this is the same issue that affects all lockscreen shortcuts, but it highlights the difficult balance between ease of use and security that smartphones face. Too much, and usability features like Touchless Control are pointless; too little, and your email, social networking, accounts, and everything else are left open for anybody with physical access to your device to dig into. 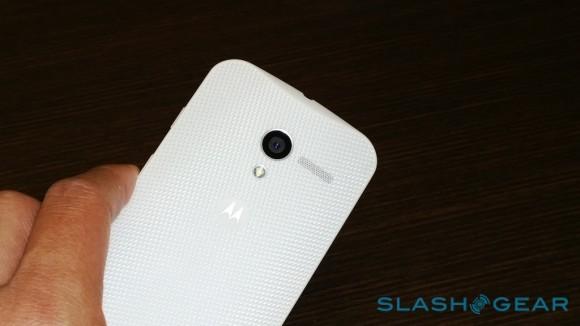 The Moto X’s other party-piece is its camera. As with HTC and Nokia, Motorola has gone direct to the sensor to improve matters, though its changes are different again from the One and the 1020 PureView. At 10-megapixels, the Moto X’s main camera is lower resolution on paper than, say, the Galaxy S 4, and a 1.4-microns its pixels themselves are smaller than the 2-micron pixels on the HTC One. However, Motorola has used a new type of “RGBC” sensor for what it’s calling Clear Pixel technology – the “C” stands for Clear – where the traditional red, green, and blue sensors are joined by a fourth, for measuring light levels. 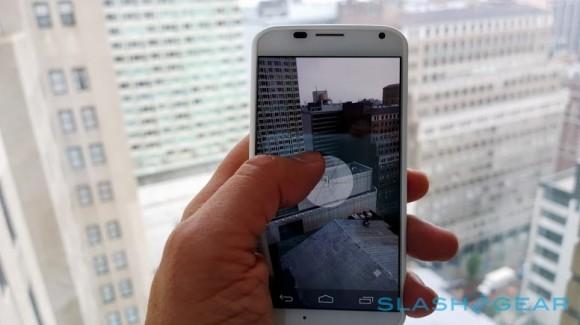 Motorola’s boast is up to 75-percent more light captured than your average smartphone camera, without sacrificing detail. More light means better performance in night or indoor conditions, or faster shutter-speeds in daylight, avoiding motion blur. The f/2.4 aperture lens isn’t quite as wide as the f/2.0 of the One or f/2.2 of the Galaxy S 4, and nor does it have optical image stabilization as on the HTC, but even in our early tests, the Moto X is capable of some solid results.

The speed is particularly impressive: hold your finger down on the touchscreen and the Moto X will fire off burst frame after burst frame, with pretty much no lag whatsoever in saving. The interface itself has been refined to dismiss unnecessary taps and tiny iconography, so you simply touch the display to focus and capture an image, or tap the video button to begin 1080p recording. Touching the screen during video recording grabs a still, too.

Even accessing the camera is straightforward, with a double-twist movement with your wrist automatically jumping into the app (and bypassing any PIN-lock in the process). You can go from locked to taking a photo in under two seconds, in fact. Swiping right in the camera preview screen opens the settings – there’s an HDR mode, as well as panoramas – while swiping left opens up the most recent photos and images captured.

This is a hugely important phone for Motorola and Google, not to mention one which could prompt a shake-up in how new Android phones approach the market with a context-first attitude. It’s undoubtedly a more difficult thing to get right compared to just packaging up the latest and greatest hardware, but if done properly it could mean a far better experience for users themselves.

We’ll be putting the Moto X through its paces for the full SlashGear review, so leave us any questions you might have in the comments below.