Apple may not have turned the Apple TV into a console yet, but that hasn’t stopped one game developer from trying it, with Motion Tennis turning the iPhone into a Wii style motion-controller for the set-top box. The game relies on AirPlay Mirroring, more commonly associated with screen sharing, but used by Rolocule Games to translate gyroscope and accelerometer data from how the iPhone is swung into Wiimote-like motion information to control the virtual players on-screen.

The game, currently $7.99 in the App Store, is only the first title expected to use Rolocule Games’ homegrown AirPlay customization, branded “rolomotion”. It requires an iPhone 4S, iPhone 5, or iPod touch 5th-gen, with iOS 6.0 or above; the Apple TV has to be a 2nd- or 3rd-gen model. The developer says that, though it will work with an iPad or iPad mini on iOS 6.0, it’s not optimized for them; you might also feel a bit silly waving one around.

Once connected using the regular AirPlay Mirroring system, holding the iPhone in different orientations, and swinging it around, controls the on-screen players. There’s support for forehand and backhand swings, as well as slicing and lobbing, depending on the position you’re holding the smartphone. 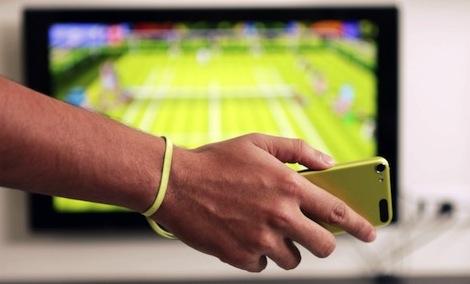 Navigating through the game, meanwhile, involves pointing the end of the iPhone at the TV and gesturing through the interface, again similar to how gamers control Nintendo’s Wii.

In addition to a single player mode, where the gamer can go up against a virtual foe, there’s also a doubles-match option where two human players can compete with two on-screen opponents. A “Tennis Survivor” mode demands the ball be kept in motion, with a single miss ending the round, and players competing for a high-score.

There are also options to pick different types of court surface, Game Center integration, and more. 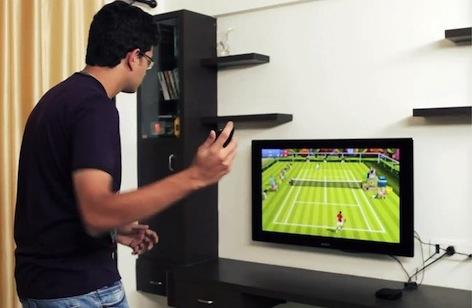 Apple has long been rumored to build out the Apple TV into a games console of its own, though so far the absence of App Store access means that only official apps and services feature on the set-top box. However, the threat of an Apple console already has rivals working on alternatives; Google, according to rumors this week, is working on an Android-powered console of its own, inspired in part by Kickstarter-success OUYA.