While it’s not headed to market for a while yet, seeing a completely wireless* mouse capable of recharging itself on the go wasn’t something we expected to see this week from Mionix. Then again we have discovered – over the past year or so – that this relatively small group of creators are capable of making fantastic gaming peripherals, and don’t put it past them to figure out the dilemma they’ve got facing them in this product here this past week at CES 2014. While we can sit still and charge with this prototype mouse – wirelessly – we’ll still have to stop with the charging while we’re playing.

This prototype mouse was shown to us by Mionix CEO Peter Nygren (as seen in his fantastic modeling of their new NASH 20 headset this week), and as he’s proven to us with the NASH 20, the company isn’t above working for an extended period on a single product just to get it right. The NASH 20 headset was, after all, a prototype shown to us at CES 2013, just coming to market this upcoming season after being shown at CES 2014 in its final form.

In this wireless gaming mouse prototype we’ve got a shape that’s based on the ever-improving NAOS, a gaming mouse so perfectly form-fitting that we use it for everyday work as well. This mouse works with a mousepad fitted with the ability to inductively charge the mouse, requiring that the mousepad, instead, is plugged in to an outlet or one of your PC’s USB ports.

UPDATE: This device is apparently going by the name “Concept PX” for the time being. It’ll very likely be released with an ever-so-slightly different name in the end.

Nygren showed us how simple the innards of this mousepad need to be. There’s really not a whole lot to the whole setup. Besides this there’s a single USB dongle that plugs in to your PC, allowing for software-supported gaming-level wireless mouse connectivity. When the dongle light is on, the mouse is functioning with the PC – when the light on the mousepad is on, the mouse is charging. For now, there’s never a time when both lights are on at once.

This mouse is also fitted with a couple of AA batteries for when you want to bring it out without the mousepad, these batteries providing what Nygren suggests is around 20-hours of usage. 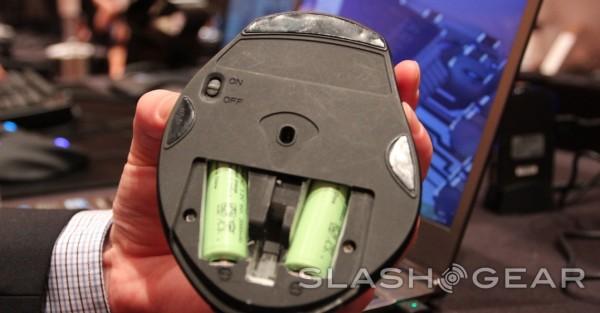 This release will likely cost somewhere in the ballbark of the NAOS lineup of mouses, but the company has provided no confirmation of price range as of yet. We’ll likely see pricing shown right around the same time as a release date is provided – sooner than later!