We’re here at the biggest Microsoft event in many years: the launch of Windows 8, right here on the shores of New York City with not just a press event set up for the blast, but a full-on takeover of Times Square as well! We’re expecting to see final iterations of many of the key products in Microsoft’s extended family as well as 3rd party manufacturers galore, not to mention releases of software and final details on the Windows 8 OS for the whole world. It’s here that we’ll also be watching Microsoft launch their global campaign for Windows 8 as their key system – it all begins at 11:15 Eastern Time.

We’ll be posting each news bit as it comes down the pipe, five by five. There’s also a live video of the event you can watch while you’re getting pumped up for the event as well. Microsoft will be presenting Windows 8 as a simple-to-use beautiful and powerful system – clean as that. The brand is what will be pushed here, of that you can be certain. Brand NEW hardware is unlikely today, as such a reveal would be a bit confusing for the public that’s still wrapping their heads around the fact that Microsoft does have their own tablet on the market – check our

Those of you interested in learning all about the final form of Microsoft’s big release here should check out our massive Windows 8 review and drop your jaw at the size of it. Be sure to read up before the big event here starts. Also have a peek at what Samsung has done to keep the eye on them for the week – it involves Kanye West (spoiler). Also keep your eye on the word Nexus today to see if Google will release any big hints on their own upcoming event next week – and be a bit suspicious of all the “leaks” thus far. 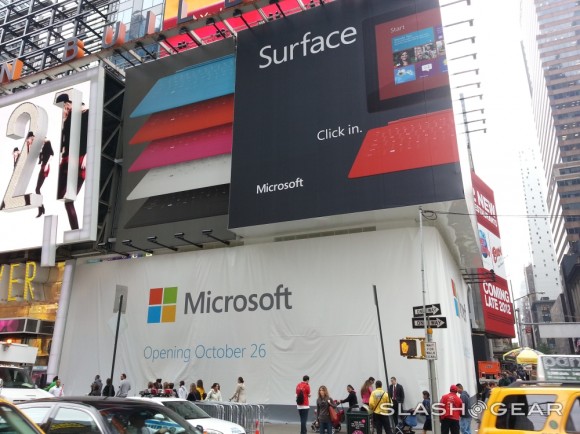 Finally get pumped up about the gigantic Times Square takeover that Microsoft has let fly a bit early – a full on mega Star Screen that’ll be covering the whole of the center of the modern world. Microsoft is pulling out all the stops with this one, then hitting the afterburners to blast forth unto the next generation for their brand – this is about to be big, big stuff.