There’s no denying that Microsoft’s new Surface Duo has the wow-factor. A waif-like clamshell of soft-touch metal, that smoothly hinges open to reveal not one but two touchscreens – complete with Surface Pen support – it’s hard not to look at it and think of a sci-fi movie prop. Yet Microsoft aims to put its futuristic gizmo on sale next month.

Of course, it’s right at that point where you run head-first into the Surface Duo’s problems. $1,400 for the cheapest model puts it resolutely in flagship smartphone territory, and sure enough you can use the Android-powered device for phone calls and messaging too. 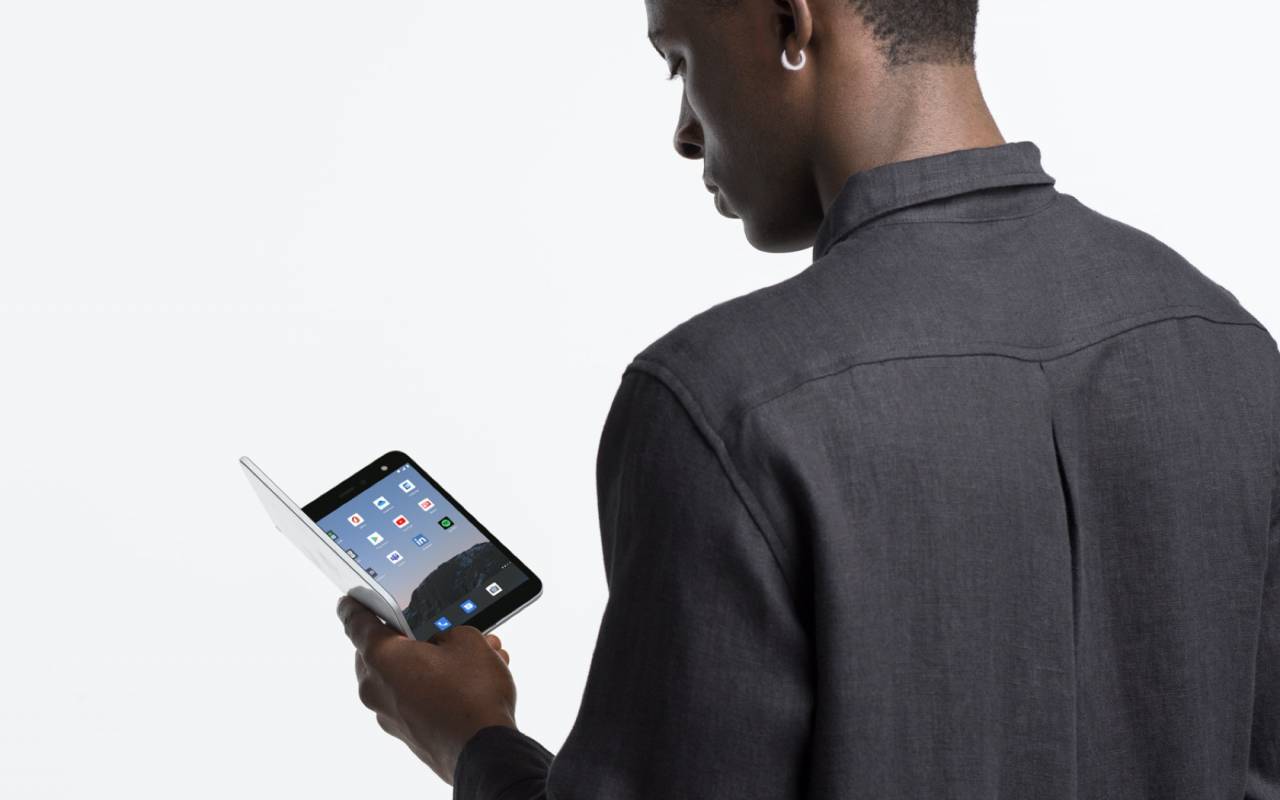 Only on 4G LTE networks, however, rather than 5G. It’s not the only strange decision on Microsoft’s part, either: using Qualcomm’s older Snapdragon 855 chipset, for example, feels out of place, as does opting for a single, 11-megapixel camera. With a total battery capacity smaller than what you’d find in a first-generation Samsung Galaxy Fold, and no wireless charging to keep it easily topped up, you’d be forgiven for asking yourself if the Surface team simply wasn’t aware of what the rest of the Android phone world had been up to.

The reality is that, for all its gut-reaction appeal, Surface Duo is more about software than hardware. It’s a description you could level at Microsoft as a whole, indeed. The company has stoked its fortunes in recent years by spreading its software far and wide, looking beyond simply making products for its own Windows OS, and seemingly figuring that if rival platforms are going to be out there, then they might as well run Office while they’re at it. 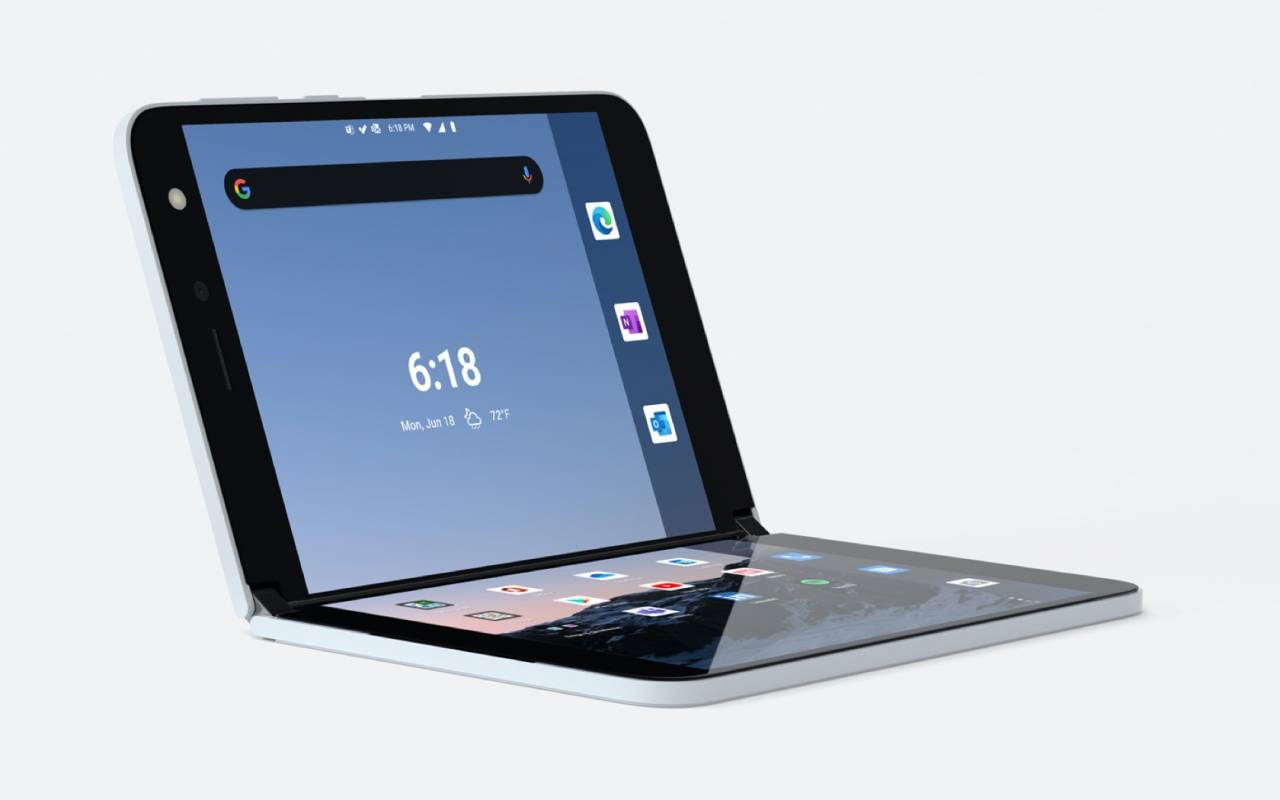 Set aside the mixed-bag of hardware, and Surface Duo’s real intrigue is the way it coaxes Android into something a little in line with the old Courier concept people remember so fondly. That built its value on the possibilities of two screens that could be used together or independently, though had an easier job of it since it only had to be a concept render and not a real device. Sure enough the Surface Duo does much the same, only with Android apps rather than Windows ones.

Google and Microsoft worked together closely on the integrations, though there are really just a a few core user-facing ideas to be grasped. You can open two apps at once, and have one devoted to each screen. To make that process easier, you can create App Groups, effectively a shortcut that opens both apps with one icon tap.

Content can be dragged and dropped between screens, and apps can be maximized to take up both panels. Alternatively, the Surface Duo can use one of its touchscreens as a virtual keyboard, for some hunt-and-peck typing. Some apps are described as “enhanced” for the Duo form-factor, either because like the Edge browser they allow for two tabs to be open side-by-side, or because they have different views for both screens such as an Outlook inbox alongside a full message preview. 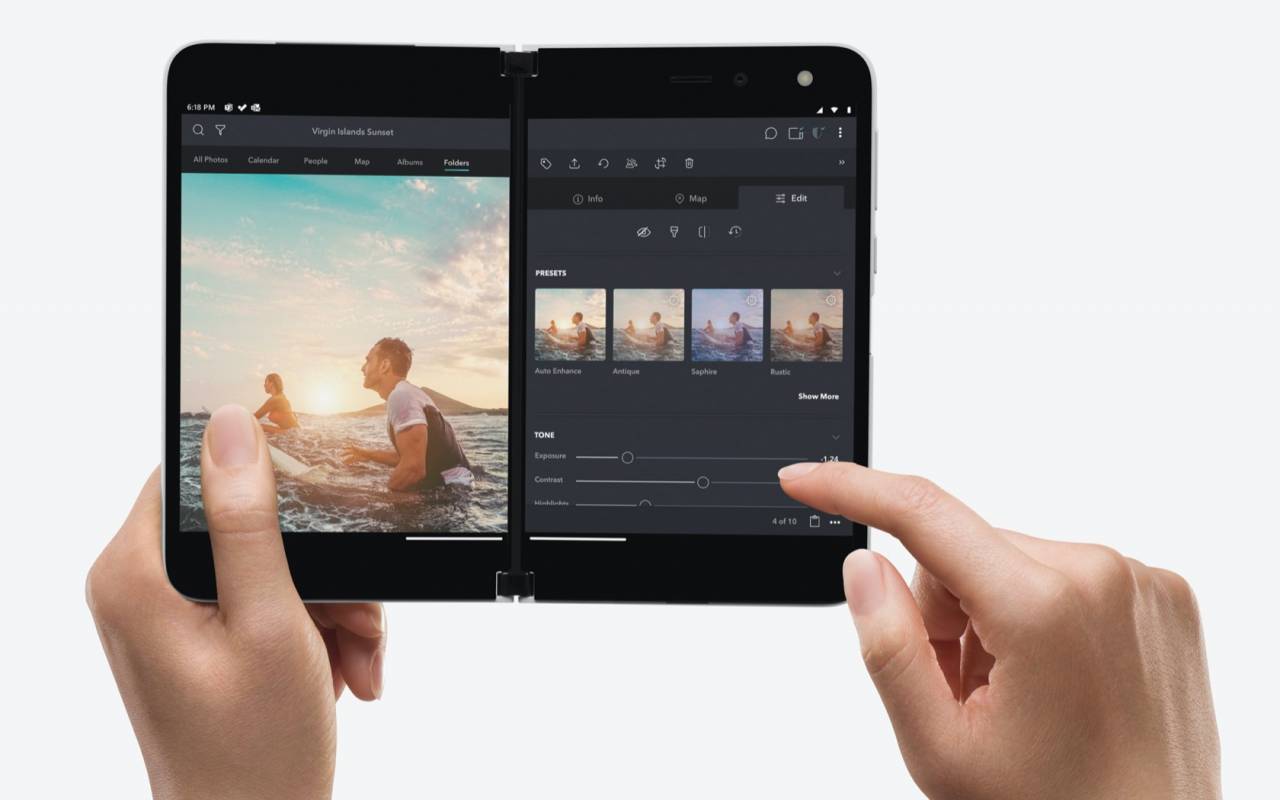 To be fair, none of this is entirely unique to Microsoft. The aforementioned Galaxy Fold went the whole hog with its foldable screen, a single sheet of bendable AMOLED rather than two separate panels and a hinge as on the Surface Duo. LG has been pushing multi-app ideas with its recent Dual Screen phones, meanwhile. The LG Velvet may not be quite as slick in its Dual Screen accessory as the permanently-attached Surface Duo is, but many of the software concepts feel very similar.

In a lot of ways, the Surface Duo feels like a stopgap. Sure, Microsoft can say that having two separate panels delineates the experience: one app for one screen, a purists view of multitasking. All the same, it’s not hard to be reminded of Apple’s initial vision of iPad multitasking, with all its limitations, and wonder if Surface Duo will suffer the same challenges. 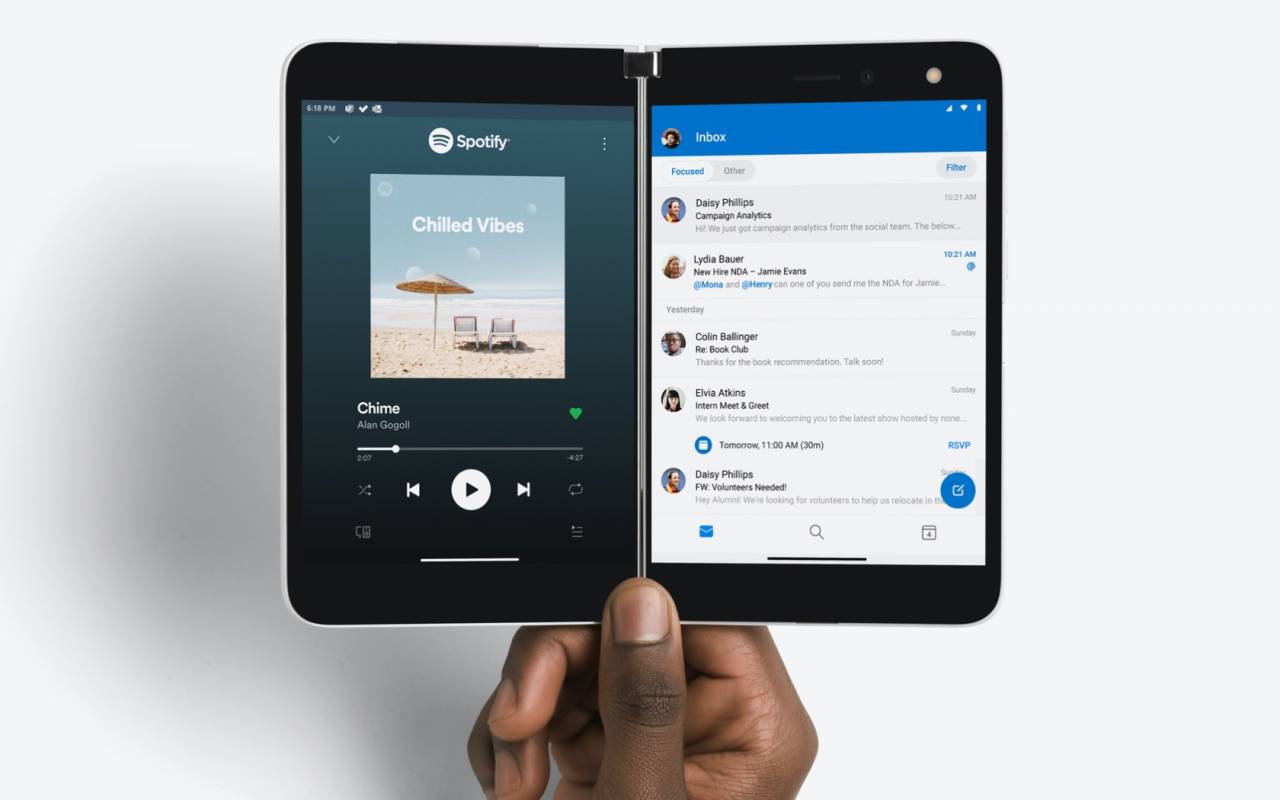 The reality is that having one, single, foldable screen – as on, say, a Samsung Galaxy Z Fold 2 – is just a lot more flexible. Then it’s up to you to decide whether you want to devote a full 50-percent of the screen to each app. If I’m jotting down things in OneNote while listening to Spotify, do I really need an App Group that gives the music app a full half of the display real-estate I have to play with?

If past Surface launches are anything to go by, it may well take a few generations before the reality of the product matches the ambition of the promise. Indeed, the Duo-descendent actually worth buying may not end up coming from Microsoft at all. 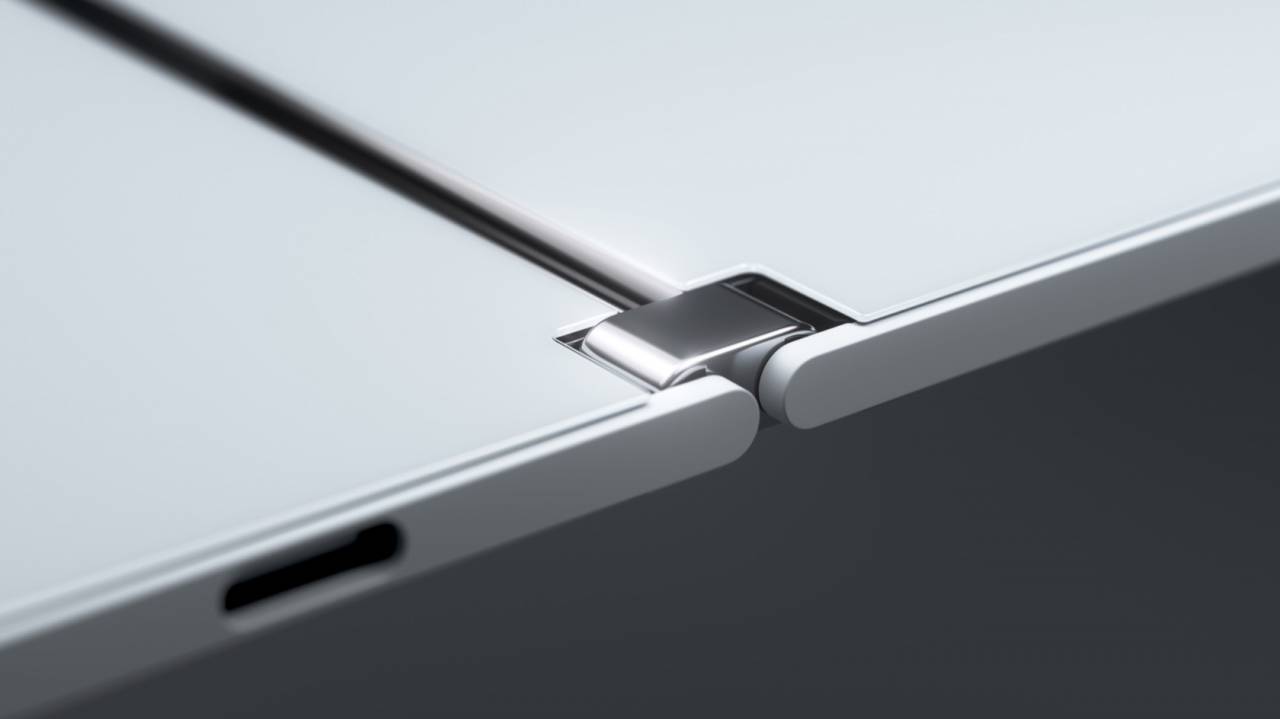 Surface has always been part-product line, part-reference design. A heavy-handed nudge to Windows OEMs to raise their game, and show them and consumers alike what Microsoft’s software is capable of. It’s been a success on that front, too: Windows laptops are far more sleek, stylish, and generally appealing than they used to be, and that’s before you get to the experimentation in form-factors we’ve seen in recent years, and no small amount of credit for that should go to Surface for paving the way. 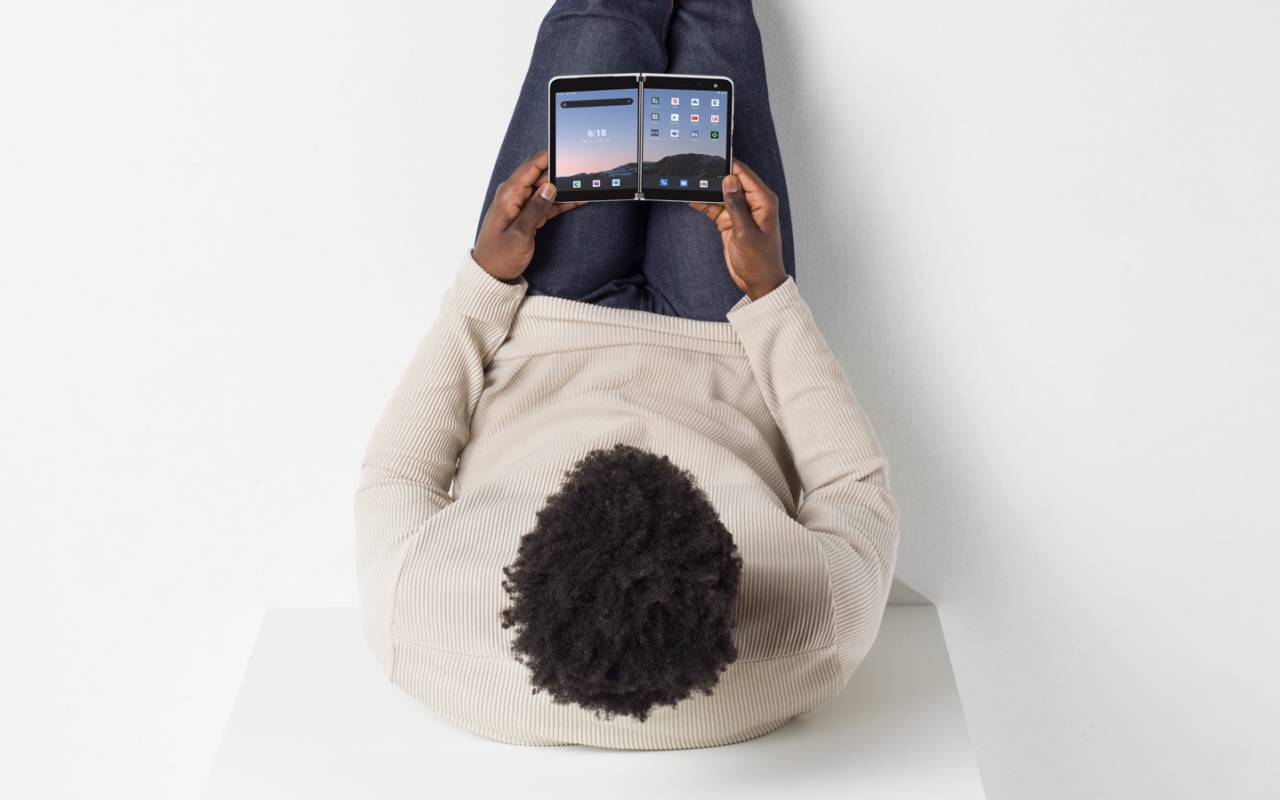 That’s not to say Surface products themselves have necessarily been the right computers for actual end-users. On that level, Surface Duo – a flagship phone launching without 5G, NFC, or wireless charging, carrying a premium price tag, but with only fledgling software support – feels a whole lot like something you should look to in order to see where the smartphone world might go, rather than for an actual phone to put in your pocket.

In the end, some of Microsoft’s use-cases for Surface Duo definitely have me curious. I’m just yet to be convinced that Surface Duo itself will be the best device to experience them on.